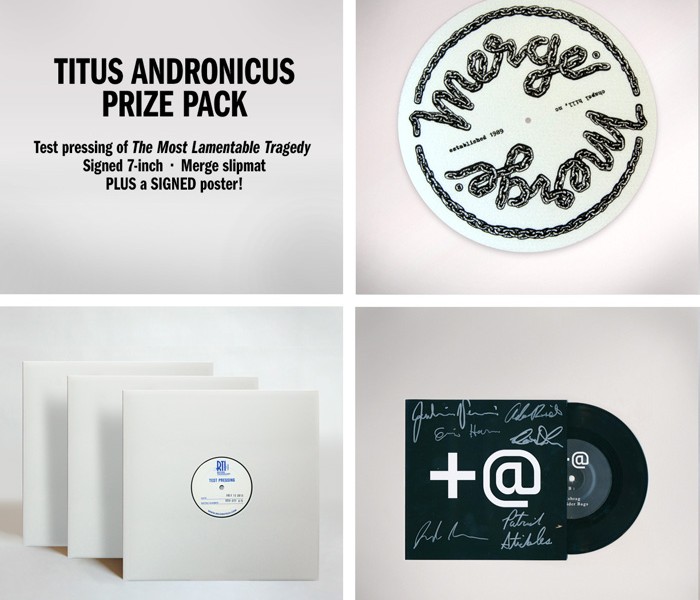 Merge Records Hooked Us Up With This Awesome Titus Andronicus Prize Pack! You Know We’re Going To Make You Work For This, Right?

This is one serious prize pack! Included is a signed 7″, a signed poster, a Merge Records slip mat, and a test pressing of the Titus Andronicus album, “The Most Lamentable Tragedy.” We’re also throwing in a few tickets to their upcoming show, courtesy of Psyko Steve and The Rebel Lounge!   We have a few tickets to give away, so even if you don’t win the big prize, you still have a good chance of winning tickets to the show!

So what ridiculous task do we require of you to win this prize? It would have to be something the band would appreciate… Judging by their name, it seems they have an appreciation for the writings of William Shakespeare, thus, most likely an appreciation for Elizabethan era writings in Iambic Pentameter! So, we’re going to want to hear a verse of two from you about your love for the band, Titus Andronicus, in your best Shakespearian style writing. Leave your entry in a comment below. We’ll go easy on you and make this a random drawing from anyone who enters. So, that means, it doesn’t have to be good!

By what task does Stinkweeds require
To obtain such a prize which your heart desires?
Only that of a short form Sonnet
Sounds easy enough, now get on it!

EDIT: HUNTER FYFFE IS THE WINNER OF OUR CONTEST!
Here’s his entry:

Mine attempt to win as ambitious
As this record with which thou doth tease us
And oh my fancy it would tickle,
To be awarded these songs of the great Patrick Stickles

For no band has ever before
Crafted such fine songs, about Civil War
Or written such impression
Of those combating debilitating depression