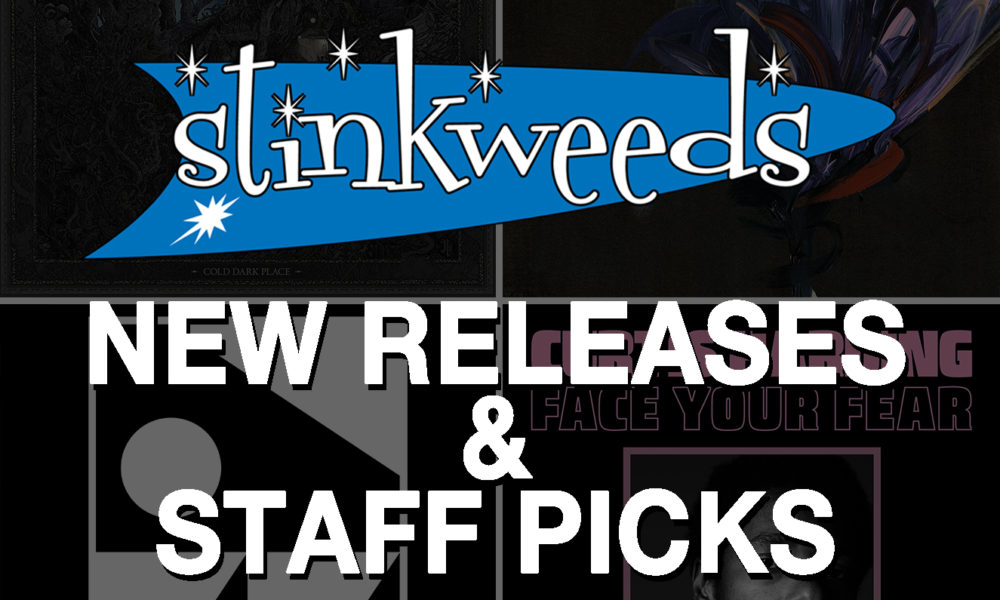 Julien Baker – Turn Out The Lights CD/LP+MP3 (Matador)
From its opening moments — when her chiming, evocative melody is accompanied by swells of strings — Turn Out The Lights throws open the doors to the world without sacrificing the intimacy that has become a hallmark of Baker’s songs. The album was recorded at the legendary Ardent Studios in her hometown of Memphis, TN, and mixed by Craig Silvey (The National, Arcade Fire). This evolution from Sprained Ankle’s intentionally sparse production allows Baker — who is still the album’s sole producer and writer — greater scope and freedom. Strings and woodwinds now shade the corners of her compositions, and she takes to piano rather than guitar on several tracks, pushing the 21-year-old’s work to cinematic heights of intensity. [Limited clear vinyl pressing also available.]

Peter Case – On The Way Downtown: Recorded Live On Folk Scene – 1998 CD (Omnivore)
Peter Case has always been a pioneer. Genre-tripping through punk with The Nerves (“Hanging On The Telephone”), new wave/power pop with The Plimsouls (“A Million Miles Away”) and Americana with his Grammy-nominated, self-titled solo debut. It is a career that is still going strong over 40 years later. On The Way Downtown: Recorded Live On Folk Scene captures material from two live performances on the highly influential KPFK (Los Angeles) syndicated radio program in 1998 and 2000. The first half features material from his then, newly released Full Service, No Waiting—an album New York magazine called “stunning.” The latter half contains material from 2000’s Flying Saucer Blues, as well as songs from his earlier releases. Plus, some choice covers appear as well. Both intimate acoustic sets have remained unheard since their original broadcasts.

Bootsy Collins – World Wide Funk CD/LP+MP3 (Mascot)
The funk runs deep and rich on Bootsy Collins’ first studio album since 2011’s Tha Funk Capital Of The World. Populated with musical friends old and new, and recorded in his Cincinnati home’s Bootzilla Re-hab studio, World Wide Funk marks both a reckoning and significant reboot, if you will, for the Rhinestone Rock Star Monster of a doll baby baba! Blue-chip rappers like Doug E. Fresh, Big Daddy Kane, DJ Quik, Dru Down, and Chuck D, along with guitar shedder Buckethead join a Bootsy-curated posse of fresh new artists on a record that embraces everything from the classic P-Funk sound Bootsy pioneered to the closest Collins has ever come to radio-active, boots on the ground friendly fire in a musical-P-rated-adventure.

Dirty Fences – Goodbye Love CD/LP+MP3 (Greenway)
Brooklyn’s Dirty Fences third studio album, Goodbye Love, is the follow-up to 2013’s Too High To Kross and 2015’s Full Tramp. On Goodbye Love, Dirty Fences give a nod to their influences — which include acts like Redd Kross, The MC5, and Johnny Thunders, plus an obsession with early KISS and Motley Crüe through the lens of The Dictators and Ramones — but manage to maintain an identity all their own. The album is packed with plenty of meaty riffs and perfectly-executed harmonies and features a guest appearance from Sheer Mag’s Christina Halladay. The lead single “Teen Angel” pairs an undeniably catchy melody with driving percussion and wailing guitars, and its accompanying video is heavy on the party vibes.

Curtis Harding – Face Your Fear CD/LP (ANTI-)
Curtis Harding could best be described as a student of the gritty, sweat-dripping, hip-swinging blues that wafted through the air of the American ’60s. The offspring of a mother who sang gospel, and a retired veteran, he traveled all over the country as a child, singing alongside his parents, learning that music was in fact the great communicator, and that the key was not just in how pretty the notes were, but how if you were honest in what you were singing, you could stir a person on the inside. This is what Otis Redding, Sam Cooke, Bo Diddley, and B.B. King knew. That somehow there was a way to take your experiences, your pain and joy, and give them melody, cause them to live and breathe and massage the hearts and minds of all those who hear.

That is exactly what Harding does on his new album, Face Your Fear. He figures out how to tap into the old soul man of the past without mimicking or bastardizing it, but instead evoking the spirit of the true soul music of yesterday, meshed with the realities of now. [Limited edition clear vinyl pressing also available.]

Hundred Waters – Communicating CD/LP (Owsla)
The L.A.-based trio – comprised of vocalist Nicole Miglis, producer Trayer Tryon and drummer Zach Tetreault – return with their long-awaited new full-length. At the core of the album is the relationship between band members Nicole Miglis and Trayer Tryon, whose relationship catalyzed the band in 2012. The album raises questions of romantic and non-romantic love, self-realization, growing apart, and finding understanding.

John Maus – Screen Memories CD/LP+MP3 (Domino)
John Maus is a truly enigmatic musician. Broadly cut from the synth pop cloth, he’s fashioned the frosty minimalism of its fabric into a cloak of infinite meaning, genuine grace and absurdist humor over the course of three defining albums since 2006. His music is a highly mutable affair, whilst often described as retro-futurist on behalf of the ‘80s drum machines and synth sounds employed, John’s music is more personal than the nostalgic re-tread implied. There’s a cinematic quality to his songs, with pathos conjured through propelling bass-lines, trailing arpeggios and of course his deeply resonant vocal. Screen Memories was written, recorded, and engineered by Maus over the last few years in his home in Minnesota, known genially as the Funny Farm.

Various Artists – Stranger Things – Music From The Netflix Original Series CD (Sony Legacy)
This 30-track compilation album (19 songs and 11 audio clips) includes a range of beloved 1980s hits and classic tracks featured in Stranger Things and the highly-anticipated second season, Stranger Things 2. The album features nineteen songs and eleven audio clips from the show. The vinyl edition will be released later this year. Artists and original hit recordings include Toto (“Africa”), the Bangles (“Hazy Shade Of Winter”), Corey Hart (“Sunglasses At Night”), and more, along with unannounced titles from Season 2.

Weezer – Pacific Daydream CD/LP+MP3 (Crush/Atlantic)
Following the release of Weezer (The White Album), the band began working on what they called The Black Album, but as they worked, they found the songs they were writing felt more like reveries from a beach at the end of the world. Instead of forcing a different direction, they began an entirely new album; Pacific Daydream was born. Pacific Daydream – an album full of the melodic mastery and craftsmanship for which Weezer are beloved – is a record that navigates the uncertainty between reality and dreams, blurring the line between the listener knowing if they are daydreaming the world of the album, or if the world of the album is daydreaming them. It’s a record about finding the gray area between the black and the white, about escaping the everyday into the fantasy of what may be just down the line, but also maybe isn’t. [Limited red and black colored vinyl pressing also available.]

Lee Ann Womack – The Lonely, The Lonesome, & The Gone CD/2xLP (ATO)
Lee Ann Womack’s new album, The Lonely, The Lonesome, & The Gone, mixes the country, soul, gospel and blues of her native East Texas, into an audacious, sharp-edged work of art. The album was recorded with her core band of top shelf musicians including bassist Glenn Worf, songwriters and guitarists Wright, Payne and Ethan Ballinger, and drummer Jerry Roe, and was mostly recorded at the legendary Sugar Hill Studios in Houston, TX. (Formerly known as Gold Star and open since 1941, Sugar Hill is one of the oldest continuously run studios in the country and home to seminal early recordings by many artists who had a formative influence on Womack, including George Jones, Willie Nelson and Lightnin’ Hopkins.) Among the album’s three cover songs, Womack recorded a haunting version of George Jones’ “Please Take The Devil Out Of Me” standing on the same gold star linoleum floor where he cut the 1959 original. “I wanted to get out of Nashville, and tap the deep music and vibe of East Texas,” says Womack. “I wanted to make sure this record had a lot of soul in it, because real country music has soul. I wanted to remind people of that.”

Dhani Harrison – IN//PARALLEL 2xLP (BMG Rights Management)
Recently released on CD – now available on vinyl. For the first time, Dhani Harrison felt right about creating a solo album after many years of playing in bands. His debut In Parallel proves that it was well worth the wait. Dhani describes IN//PARALLEL as the music he hears in his head; a sprawling, pre- and post-apocalyptic cinematic universe that takes the listener on a journey through his life, the places he’s been, the people who’ve helped him along the way.

Mastodon – Cold Dark Place 10” (Reprise)
Recently released on CD – now available on limited 10” vinyl picture-disc. Four previously unreleased tracks. Three of the songs – “North Side Star,” “Blue Walsh,” and “Cold Dark Place” – were recorded during the sessions for the band’s 2014 album Once More ‘Round The Sun. The fourth cut, “Toe To Toes,” was recorded during the sessions for their most recent album, 2016’s Emperor Of Sand.”

Quicksand – Manic Compression [Reissue/1995] LP (SRC Vinyl)
Manic Compression would be Quicksand’s last studio album before their first split in October 1995. The band’s heavy metal is distinguished not by hooks but by precision — they grind their riffs into the ground, never alleviating their intensity.

Widespread Panic – Live From Austin, TX [2000] 2xLP (New West)
This is classic Widespread Panic, including David Schools on bass, John Hermann on keys, Todd Nance on drums and Domingo Ortiz on percussion. One look at this show and it’ll quickly become obvious there was something strange going on in the house that night. Yes, it was Halloween, 2000, and the rabid fans went beyond even their usual hard-core delirium. This was one time the audience almost threatened to steal the show. 180gm vinyl pressing.