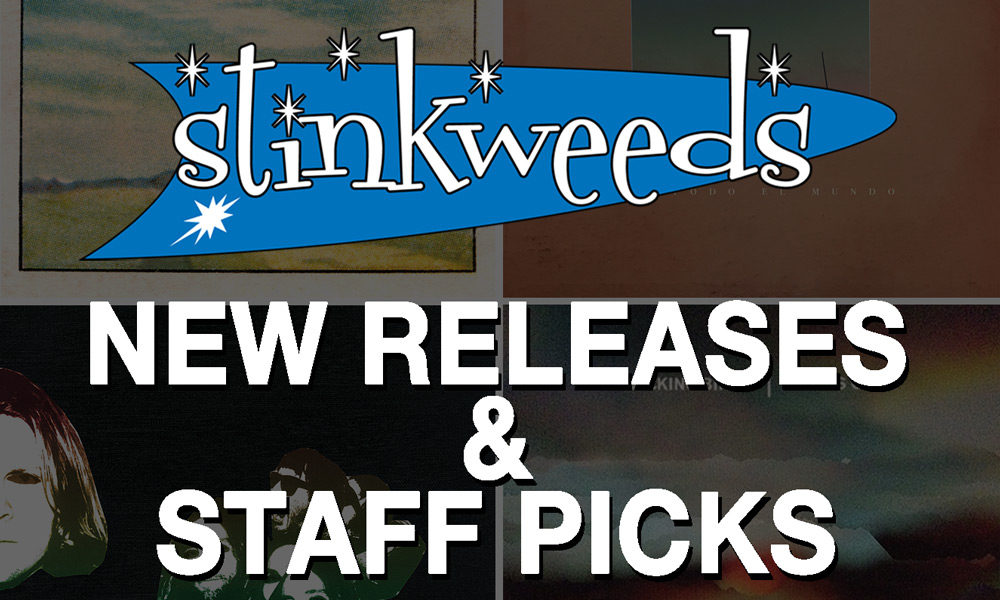 Calexico – The Thread That Keeps Us CD/LP+MP3 (Epitaph)
The ninth studio album from Calexico is a timely snapshot of the Arizona-bred band: a family portrait capturing their stylistic variety and unpredictability while still finding solace in limitless creativity. In bringing The Thread That Keeps Us to life, vocalist/guitarist Joey Burns and drummer John Convertino found a spiritual home in unusual surroundings – not in Arizona, but on the Northern California coast in a home-turned-studio called the Panoramic House. Built from debris and shipyard-salvaged timber – and dubbed “The Phantom Ship” by the band – the grandiose house and its edge-of-the-world-like ambience soon made their way into the songs. With less polish and more grit than ever before, The Thread That Keeps Us both honors enduring traditions and reveals Calexico’s confidence in songwriting, ultimately setting a whole new standard for the band.

Hollie Cook – Vessel Of Love CD/LP+MP3 (Merge)
Hollie Cook combines her unique vocal talent and charisma to craft a dynamic strand of lovers rock with enduring tropical vibes, weaving a path from her West London roots to an arena of diverse collaborations, critically acclaimed records, and iconic live appearances around the world. Cook’s ability to surprise, delight, and progress solidifies her position as one of the most exciting voices in reggae, and this is clear on her third full-length Vessel Of Love. Acclaimed producer Martin “Youth” Glover lends his venerable production expertise to the album. Cook sits in good company on Glover’s impressive production list, joining Paul McCartney, Tom Jones, The Verve, Primal Scream, Pink Floyd, and Depeche Mode. Glover describes Cook’s songs as “sharp lyrical observations and clever word play combined with an exquisite and informed pop sensibility.”

Evidence – Weather Or Not CD/2xLP (Rhymesayers)
Weather Or Not represents the fourth and final chapter in Evidence’s Weatherman series, and features an all-star lineup of guests and friends, including Slug (Atmosphere), Rakaa (Dilated Peoples), Alchemist, Styles P, Rapsody, Jonwayne, Defari, Krondon, Khrysis, Mach Hommy and Catero. While Evidence holds his own on the boards, he’s also tapped a stellar cast of producers to share duties with, including Alchemist, DJ Premier, Nottz, DJ Babu, Twiz The Beat Pro, Sam I Yam and Budgie.

Khruangbin – Con Todo El Mundo CD/LP/Cassette (Dead Oceans)
Whereas Khruangbin’s 2015 debut album The Universe Smiles Upon You was influenced by ‘60s and ‘70s Thai cassettes and compilations of southeast Asian pop, rock and funk, Con Todo El Mundo hops east over India to take inspiration in similarly under discovered funk and soul sounds of the Middle-East, particularly from Iran.

Marie/Lepanto – Ten Killer CD/LP (Big Legal Mess)
Songwriting extraordinaires Justin Peter Kinkel-Schuster (Water Liars) and Will Johnson (Centro matic) join forces on a collection of quiet (mostly) acoustic songs.
H.C. McEntire – Lionheart CD/LP+MP3 (Merge)
H.C. McEntire, frontwoman of Mount Moriah, strikes out on her own with her debut solo album Lionheart, a collection of songs inspired by the American South and a desire to reclaim ‘country’ music from the hetero-normative, homogenous shtick of tailgates and six-packs and men chasing women. Stereogum describes her voice as “weary, wise, and bright as morning sunshine all at once,” and that sunshine glows throughout the triumphant Lionheart. For the album, McEntire collaborated with many of her favorite musicians, including Kathleen Hanna, Angel Olsen, Amy Ray, Tift Merritt, William Tyler, Mary Lattimore, and Phil Cook, while remaining bravely devoted to her most authentic self throughout the process. Lionheart was recorded during the first few months of 2017 with additional recording and mixing taking place on the run as McEntire toured the world as a member of Angel Olsen’s band.

Mimicking Birds – Layers Of Us CD/LP (Glacial Pace)
Mimicking Birds is a three-piece rock band fronted by singer/songwriter Nate Lacy. Dream-like, immersive, and awash in texture, Layers Of Us explores daunting topics like life, death, and eternity with a gentle touch. Lacy tenderly serenades us though this epic 10-song expedition that presents the full prismatic array of musical color.

NO AGE – Snares Like A Haircut CD/LP (Drag City)
Rock and roll for the black hole — reimagined rippers, for the misfits that 2017 couldn’t kill to blast under the shadow of the big boot and beyond the glow of the chemical horizon. This is driving music, and you’re the designated shotgun rider — get in!

Ty Segall – Freedom’s Goblin CD/2xLP/Cassette (Drag City)
A head-spinning compendium of stompers, weepers, ballads, screamers, bangers and funker-uppers, all marking a different impasse, like a flag whirling into a knot, exploding and burning on contact, in the name of life and loathing and the pursuit of what you love.

Mayo Thompson’s first published work of fiction since the 1960s. He is best known for his work with the psychedelic band, The Red Krayola. “Perlat Tile, Pablo Pablon, Ms. Jasmine, and the Beast of Bern tussle and conspire with other assorted gangsters and PhDs over an illicit Pollaiuolo statuette. The action unfolds in Tirana, between the National Museum and a bar named Tiranosaurus Tex, leading to a denouement in Venice. Mr. Thompson has given us the perfect cocktail of suspense and whimsy. Very highly recommended—even the most humorless of art historians will be tickled by Art, Mystery!”—Dr. Emmelyn Butterfield-Rosen