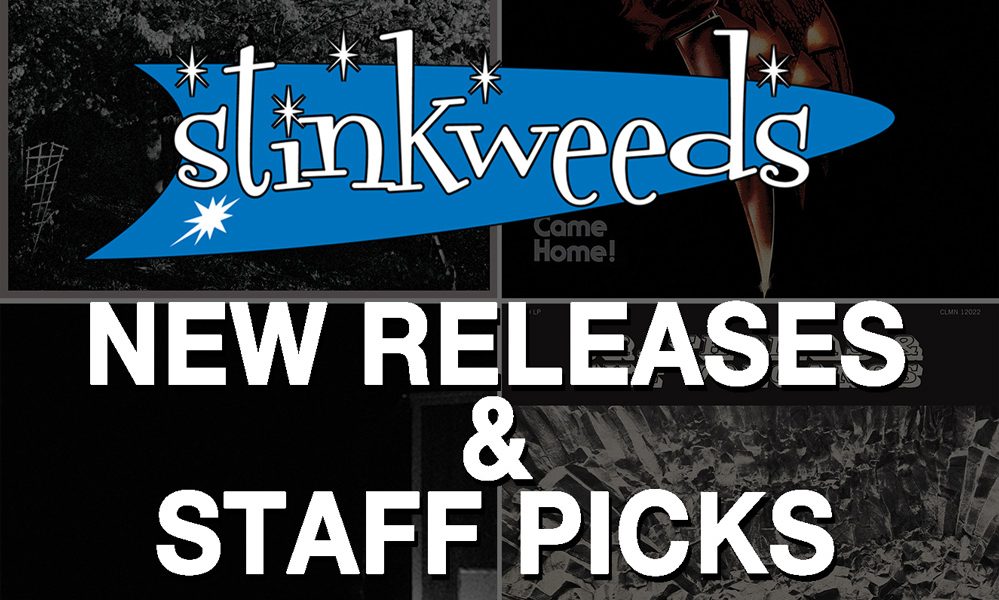 Richard Ashcroft – Natural Rebel CD/LP (BMG)
As the frontman for the epic British drone-pop band The Verve, Richard Ashcroft proved himself to be a spiritual descendant of rock & roll icons like Mick Jagger and Jim Morrison. Rivetingly charismatic, menacingly serpentine, and possessed of an almost shamanic intensity, he embraced and articulated the anthemic fervor of rock music with a power and eloquence unparalleled by any of his contemporaries. Ashcroft’s fifth solo studio album, Natural Rebel, features 10 new self-penned songs, produced by the singer-songwriter alongside Jon Kelly (Paul McCartney, Kate Bush) and Emre Ramazanoglu (Bobby Gillespie). “With experience comes knowledge and for me, this is my strongest set of songs to date,” notes Ashcroft. “All my favorite sounds distilled into something that will hopefully give my fans lasting pleasure. It is for them. Music is power.”

Cloud Nothings – Last Building Burning CD/LP+MP3 (Carpark)
Last Building Burning is the product of eight days with producer Randall Dunn (Sunn O))), Wolves In The Throne Room, Boris) in Texas studio Sonic Ranch. Clocking in at just over half an hour, the eight-song album sees Cloud Nothings capture their onstage appeal with help from Dunn, who Dylan Baldi describes as “technically minded without relying on technology to perfect the live sound.” In that, Last Building Burning is a return to Cloud Nothing’s sharpest form – the unhinged, feverish, guitar-heavy sound that they explode with onstage – without their early angst. “It’s not an angry record,” says Baldi. “It’s a very joyous thing for me. And it feels so nice to scream again, especially when you know people in the crowd will be screaming along back at you.” [Limited indie-exclusive vinyl pressing also available.]

John Grant – Love Is Magic CD/2xLP+MP3 (Partisan)
“Each record I make is more of an amalgamation of who I truly am,” declares John Grant. “The more I do this, the more I trust in myself, and the further along I go.” Even when the Michigan-born musician released his debut solo album Queen Of Denmark in 2010, Grant laced sumptuous soft-rock ballads with an array of spacey, wistful synthesizer sounds, increasingly adding taut, fizzing sequencers, nu-synth-disco settings and icy soundscapes to the mix on 2012’s Pale Green Ghosts and 2015’s Grey Tickles, Black Pressure, the latter The Guardian described as, “variously agonizing, hilarious, uplifting and moving: another bravura display from a unique songwriting talent.” Now, with his fourth solo album, Love Is Magic, Grant has continued evolving, creating his most electronic record yet, in collaboration with Benge (Ben Edwards), solo artist, analogue synth expert/collector and a member of electronica trio Wrangler.

Jason Isbell and The 400 Unit – Live From The Ryman CD/2xLP (Southeastern Records)
Live From The Ryman was primarily recorded during Jason Isbell and The 400 Unit’s six sold-out nights at Nashville’s legendary Ryman Auditorium in 2017. The double album features 13 live versions of songs from Isbell’s last three critically acclaimed, award-winning studio albums – Southeastern (2013), Something More Than Free (2015) and The Nashville Sound (2017) – including the Grammy winning tracks “24 Frames” and “If We Were Vampires” plus fellow standouts “Cover Me Up”, “Something More Than Free” and “Elephant”, fully documenting Jason Isbell and The 400 Unit’s emergence as one of the finest live bands on the road today.

Elle King – Shake The Spirit CD/2xLP (RCA)
Three-time Grammy-nominated and platinum-selling alternative blues-rock artist Elle King – who the New York Times says, “has Adele’s determination and Joan Jett’s stomp, Brenda Lee’s high-voiced bite and some AC/DC shriek” – returns with her second studio album, Shake The Spirit, which documents an emotionally challenging, yet artistically productive period of her life. “I decided to call it Shake The Spirit because I was shaken to the core over the last year and a half,” King said of the record. “I was literally talking to ghosts. But making the album not only changed my life, it saved my life. It’s like when you see somebody who is struggling, you want to shake them. Putting this record out is like shaking myself awake.”

Jr. Thomas & The Volcanos – Rockstone CD/LP (Caroline)
Jr. Thomas & The Volcanos’ sophomore effort Rockstone is more than just a love letter to the roots of Jamaican music. It’s an actual love letter. Tom McDowall aka Jr. Thomas explains, “I could write a musical love letter to all things I loved: my wife, my family, my friends, my band mates. I could write a song to tell me to chin-up when times were tough. I could give gratitude to the Jamaican artists that paved the way for the beautiful music we now call reggae. I could write a song about what it’s like to lose someone important to you. Or write a song to invigorate me spiritually. Music is healing and that’s the best therapy there is for me.” Rockstone isn’t just another throwback record to an era gone by. It’s a record that takes risk within the genre, but more importantly it’s a genuinely honest record. “I called the album Rockstone because true love cannot be defeated,” he adds. “It lives forever. We write tributes on our tombstones because they live on beyond our lives as a remembrance of something special and important to us.” [Limited colored vinyl pressing also available.]

John Carpenter – Halloween [OST] CD/LP (Sacred Bones)
When the new Halloween movie hits theaters in October 2018, it will have the distinction of being the first film in the canon with creator John Carpenter’s direct involvement since 1982’s Halloween III: Season of the Witch. The new soundtrack pays homage to the classic Halloween score that Carpenter composed and recorded in 1978, when he changed the course of horror cinema and synthesizer music with his low-budget masterpiece.

The Cranberries ‎– Everybody Else Is Doing It, So Why Can’t We? [Reissue/1993] 2xCD/4xCD/LP (Island)
25th Anniversary reissue remastered At Abbey Road under the supervision of the band’s Noel Hogan. Expanded with a disc of B-sides. [The four-CD deluxe box set comes in a clamshell box and features 5 demos only available on a 300 issue limited release cassette and 30 unreleased tracks including demos from the album recording sessions, early cassette demos, live tracks from ‘91–‘94 (including their first ever live recording) and John Peel and RTE radio sessions. The single B-sides are also included, alongside a sleeve note detailing the band’s rise to fame + postcards and a poster.]

deM atlaS – Bad Actress CD/LP+MP3 (Rhymesayers)
Growing up in a dysfunctional home in Minneapolis, there were two things Joshua Turner turned to for comfort when his parents fought: the records he’d listen to on a loop to drown out their conflict and the atlas he’d pore over to pretend he was anywhere else. Turner’s all grown up now, but his sources of childhood refuge continue to play an integral role in his life. In his spare time, he draws maps for fun, and, under the name deM atlaS, he’s composing his emotionally complex hip-hop records aimed at listeners who are in need of some sonic solace of their own.

Minus The Bear – Fair Enough CDEP/12” (Suicide Squeeze)
With their final EP, Fair Enough, Minus the Bear closes the book on their hybrid of art-rock, indie pop, and warehouse party appeal. [Limited coke-bottle green colored vinyl pressing also available.]
Papercuts – Parallel Universe Blues CD/LP (Slumberland)
Over the course of five stellar albums, Papercuts’ Jason Quever has shown himself to be a top-notch song-writer and producer, equally at home with lush, baroque textures and more stripped-down arrangements. His skill in the studio has helped him build-up an enviable resume recording, producing and playing with artists including Luna, Beach House, Cass McCombs, Dean Wareham/Dean & Britta and Slumberland’s own The Mantles. Papercuts’ new album Parallel Universe Blues reflects Quever’s recent move from long-time musical home San Francisco to Los Angeles and all of the searching and self-exploration that accompanies leaving your home, your friends and your scene. [Limited edition white colored vinyl pressing also available.]

R.E.M. – Best Of R.E.M. At The BBC 2xCD/8xCD+DVD/2xLP (Craft Recordings)
R.E.M. grew up with the BBC, and this historic relationship is celebrated across this collection which beautifully illustrates the career trajectory of one of modern music’s greatest bands. R.E.M. At The BBC is available as double-CD and double-LP editions, as well as a Super-Deluxe eight-CD+DVD box set edition which comprises a treasure trove of rare and unreleased live and studio recordings culled from the BBC and band archives. The double-disc editions collect 20 in-studio performances and live broadcast highlights.

Morgan Saint – Alien CDEP (Epic)
One listen to Morgan Saint’s warm delivery, dreamy instrumentation, and lush lyrical poetry, and you’re somewhere else. The New York songstress invites you back into that world with her second EP, Alien and its seductive lead track “On Fire”. As adept at creating accessible pop soundscapes as she is at mining her more melancholic reflections, she’s woven a cathartic blend here adding colorful new layers to her thought-provoking repertoire that continues to challenge musical norms. [Vinyl edition due November 2.]

Soulfly – Ritual CD/LP/CASS (Nuclear Blast)
Two decades into their storied career, Soulfly’s eleventh full-length lives up to the promise of its name with a metallic ceremony of the highest order. The iconic gold-certified quartet cast their word in bludgeoning riffs, thunderous percussion, and menacing growls.

Timmy’s Organism – Survival Of The Fiendish CD/LP/Cassette (Burger)
“I’ve been on almost every single underground garage punk label there is.” – Timmy Vulgar

Various Artists – Switched-On Eugene CD/LP (Numero)
Switched-On Eugene documents the Eugene Electronic Music Collective and some of the many synthed-out figures in and around Oregon’s iconic hippie stronghold during the 1980s. Whether connected by membership, geography, or the tape trading scene, the artists in and around the EEMC shared compelling visions of the future we now inhabit, vividly captured on home-recorded tapes and distributed via zines, classifieds, and local radio. Switched-On Eugene is a deep dive into a heretofore forgotten sonic microcosm unlike any other.

Alkaline Trio – Is This Thing Cursed? LP+MP3 (Epitaph)
According to Alkaline Trio, new album Is This Thing Cursed? is a cousin or sibling to 1999’s Maybe I’ll Catch Fire. Dan Andriano explains, “the songwriting process is almost like what it was back in the day. We would just kind of write a song, be excited about it, then move on. We wrote in that spirit in the studio. I really feel like we made a record that the old school fans are going to dig.”

Broncho – Bad Behavior LP (Park The Van)
If Tom Petty wrote dystopian pop songs with enough reverb to drown out the dismay of the dying world around him, it might sound a lot like Bad Behavior’s third track “Boys Got To Go”. There’s something immediately classic and groovy about this song that will have you belting it out of your car window.
Fad Gadget – Fireside Favourites LP (Mute)
Fad Gadget aka Frank Tovey was at the forefront of the Electronic Movement of the late ‘70s/early ‘80s and is recognized as one of the most influential acts of the last twenty years. The first signing to Mute, Fad Gadget released his debut single, the groundbreaking, “Back To Nature” in October 1979. Recorded using a drum machine and synthesizer, the debut album Fireside Favourites was released in 1980 and is now being re-released as part of Mute’s 40th anti-versary celebration. For fans of Cabaret Voltaire, Silicon Teens and Depeche Mode. [Limited colored vinyl pressing also available.]