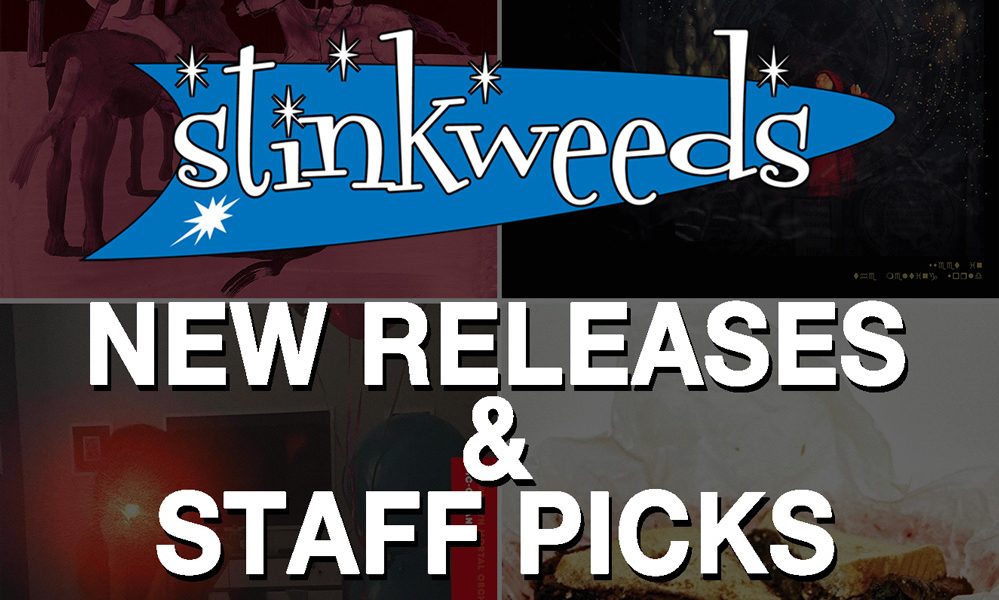 Daughters – You Don’t Get What You Want CD/2xLP (Ipecac)
By titling their fourth full-length You Won’t Get What You Want, Daughters send a crystal-clear message. The quartet once again follow the same internal compass that guided them to blur the lines of fickle heavy music sub-genres in the first place and quietly ignite a cult fervor typically reserved for grindhouse phenomena. In fact, the best way to describe the philosophy and the sound of the quartet is simply: rock ‘n’ roll. The minimal wail of first single “Satan In The Wait” belies Alexis’s intense spoken word-style delivery as gothic keys magnetically draw the spotlight. Follow-up “The Reason They Hate Me” hinges mechanized riffing and glitchy electronics as the frontman’s haunting and hypnotic intonation curls around the hook. Elsewhere, “Less Sex” dips into a bluesy guitar that could’ve easily soundtracked a dark moment of True Detective Season 1, while the seven-minute “Ocean Song” spirals into numbing noise oblivion.

Julia Holter – Aviary CD/2xLP+MP3 (Domino)
Aviary is an epic journey through what Julia Holter describes as “the cacophony of the mind in a melting world.” Throughout the album, we travel a world populated by birds, angels, and ghosts – at once characters in a mystery of uncertain denouement and a stand-in for the memories and thought-images that seem to fly through the mind on their own volition. Inklings of impending doom (“Everything Is an Emergency”) hover side-by-side with ecstatic professions of love (“Turn The Light On”) and moments of triumphant solidarity (“Voce Simul”). Like other recent projects – composing and performing a live score to Carl Theodor Dreyer’s The Passion Of Joan of Arc, as well as arranging her album Tragedy for opera, in 2017 – Aviary sees Holter juxtaposing ancient and contemporary reference points. Time collapses, with references to the deep past – Joan of Arc, the Christian Crusades, the mass hysteria of the dance of Saint Vitus – seeming to double as metaphors for our hopes and anxieties in the present. Jetting between medieval chamber music and proggy jazz-rock transports, plaintive balladry and android robotics, it’s a journey full of wild twists and turns – but it’s one that seems to cling to a sense of radical hope, even in its most somber moments.

Ian Sweet – Crush Crusher CD/LP/Cassette (Hardly Art)
In writing Crush Crusher, Ian Sweet’s Jilian Medford committed herself to exploring her own issues with self-image, self-respect/worth, and the responsibility she has felt to others. Album opener “Hiding” was one of the first songs she wrote for the record while living in a frigid Brooklyn apartment during a winter break amidst her grueling tour schedule. In the song, Medford reflects on an interpersonal relationship that fell apart because of an inability to feel supreme comfort in sharing all the pieces of herself with someone. Nevertheless, a hopeful demeanor shines through on “Hiding” and in her writing across the album, with lyrics that embrace life’s hurdles and make them feel a little less scary. Recorded at Rare Book Room studios with producer/engineer Gabe Wax (Deerhunter, The War on Drugs, Soccer Mommy), Crush Crusher is full of dissonant open chords and abnormal progressions, finding beauty in a level of conflict not seen on the trio’s 2016 Shapeshifter. By the end of the recording process, Ian Sweet wound up with an unconventional assortment of songs featuring disparate elements of psych-rock, trip-hop, and shoegaze that together forged a sound uniquely Medford’s own.

Whitey Morgan and The 78’s – Hard Times And White Lines CD/LP (Whitey Morgan Music)
Whitey Morgan and The 78’s anticipated new album features collaborations with acclaimed songwriters Travis Meadows and Ward Davis plus a cover of ZZ Top’s ‘”Just Got Paid”. Alongside Morgan, The 78’s consist of Brett Robinson (pedal steel guitar), Joey Spina (guitar), Alex Lyon (bass) and Eric Savage (drums). In a career spanning 15 years, Morgan has released live studio albums and a live recording from his hometown of Flint, Michigan. Additionally, he has toured relentlessly averaging over 125 shows annually. Rolling Stone has described him as a ”Waylon Jennings acolyte… modern-day outlaw [with a] hard-hitting, blue-collar brand of music” while NPR Music hailed, “Staying close to the sound and subject matter of classic outlaw artists like Waylon Jennings, Merle Haggard and David Allan Coe, Morgan is poised to lead this hard-worn brand of country to the next generation.” His last LP, Sonic Ranch (2015), was released to critical acclaim and praised by Detroit Free Press as, “a bold, well-crafted album that doesn’t forsake the gritty undercurrent running through Morgan’s stuff.”

The Ar-Kaics – In This Time CD/LP (Wick)
The Ar-Kaics wade in the waters of troglodyte teenbeat ‘60s-style punk. They backstroke in the ‘proto’ gray area eras before these subgenres of rock and roll had names or rules.

Blackberry Smoke – The Southern Ground Sessions CDEP/12” (3 Legged Records)
Created as an accompaniment, to their acclaimed new album, Find A Light, this six-song EP was recorded live at Southern Ground studio in Nashville, TN and features acoustic versions of five album tracks as well as a rendition of Tom Petty’s “You Got Lucky” featuring Amanda Shires.

Laura Gibson – Goners CD/LP (Barsuk)
Goners, the fifth album from acclaimed singer-songwriter and multi-instrumentalist Laura Gibson, is her best, and her strangest. There are hauntings and transformation, odd birds and harbingers. Women become wolves, men metamorphose into machines, ghost-children wave in the rearview mirror, a scar becomes a vessel for memory. Her lyrics are populated with sharp objects: a needle, a thistle, a sickle, a scythe, claws and animal teeth.

NRBQ ‎– All Hopped Up [Reissue/1977] CD/LP (Omnivore)
Released in the spring of 1977, with recordings covering a two-year period from November 1974 to November 1976, All Hopped Up is NRBQ’s fifth album. But in many ways it showcases a new band with a new spirit, a new energy, and a new approach. It’s the first album with drummer Tom Ardolino, who joined in August 1974 at the age of 19 and entered the recording studio just three month later. His joining signals the start of the edition of NRBQ that spanned almost 20 years while gaining notoriety for their blockbuster live performances and classic recordings.

Pill – Soft Hell CD/LP+MP3 (Mexican Summer)
A raucous, splintering dispatch from New York City, animated by the madcap ingenuity of a foursome finding a palpable sense of joy and play in expressions of caustic, black humor. Like the contradiction of the album title, which references our acceptance of everyday miseries, it’s a slew of dichotomies, a frenzied cutup. It’s bleeding saxophone and lustrous feedback sounding somehow pastoral, and winking hooks subtly infused with venom.

Robyn – Honey CD (Interscope)
Honey is the eighth studio album by Robyn, and her first since Body Talk (2010). The album features the lead single “Missing U” and second single “Honey”, a version of which featured in the final season of the HBO series Girls in 2017 before being released in full in 2018. The album features collaborations with Joseph Mount of Metronomy, Klas Åhlund, Adam Bainbridge, Mr. Tophat, and Zhala.

Ty Segall – Fudge Sandwich CD/LP (In The Red)
Take a tour through Ty Segall’s musical psyche with his new solo album, Fudge Sandwich, a collection of Segall’s take on eleven songs that were originally done by other people. These aren’t just cover versions. Cover versions happen at weddings and high school band battles. The songs here are what happens when someone loves a song so much, they need to get inside it and let it propagate and transform into what it would have been if they had actually written it.

Unknown Mortal Orchestra – IC-01 Hanoi CD/LP (Jagjaguwar)
While recording Unknown Mortal Orchestra’s latest release, Sex & Food, Ruban Nielson, his longtime collaborator Jacob Portrait and his brother Kody Nielson, found themselves in the Vietnamese city of Hanoi playing and recording with local musicians at Phu Sa Studios. The studio, normally used for traditional Vietnamese music, found the band jamming on sessions dubbed IC-01 Hanoi: exploring the outer edges of the band’s influences in jazz, fusion and the avant-garde. The musicians, along with Ruban and Kody’s father, a jazz musician in his own right, helped lay down the unique textures heard throughout Hanoi. At its core it’s a record of exploration, finding its closest antecedent in Miles Davis’ experimental On The Corner – itself a record full of nods toward avant-garde composers and jazz outsiders alike.

Blondie – Heart Of Glass [Reissue/1978] 12” (Numero)
The song that burst Blondie out of the streets of the Bowery to No. 1 on the charts, “Heart Of Glass” was the pivotal moment in punk’s choreographed slamdance with the mainstream. Inspired by Kraftwerk and Giorgio Moroder, Blondie transformed their campy “Disco Song” into a Roland-driven juggernaut and never looked back. Explored and exploded via six distinct versions remastered from the original analog tapes, the history of “Heart Of Glass” is documented here in a copious essay and its art re-imagined by noted American illustrator Shepard Fairey.

Cash Rivers & The Sinners – Do Not Try To Adjust Your Set I Am The Horizontal 2xLP (Imaginary Man)
Cash Rivers (aka Robert Pollard) & The Sinners is back with this 69-track psychedelic tour de force spanning genres such as country, western, country & western, rock, pop, reggae, punk, metal, hip-hop, disco, swing, children’s, surf, glam, post-punk and doo-wop. A little something for everyone. This is the swan song of the Cash Rivers catalog.

Seasick Steve – Can U Cook? LP (BMG)
Recently released on CD – now available on vinyl. Can U Cook? finds Seasick Steve mixing up all of his much-loved ingredients to deliver a good ol’ mix of boogie, blues, rock, Americana and folk-music. “Just seems there’s all kinds of sunshine and colors on this record,” Steve notes. “Maybe it’s because we made most of it down in Key West, Florida?…It was made down south, way down south, as far south as you can go and still have your boots in America.”

Tropical F**k Storm – A Laughing Death In Meatspace Slime LP (Joyful Noise)
The phantasmagorical debut album by Tropical F**k Storm delivers a fraught vision of algorhythmic apocalypse. Featuring Gareth Liddiard and Fiona Kitchin from Australian heroes The Drones, Tropical F**k Storm is an end-of-days consciousness-stream across nine seething tracks. The debut dive-bombs into the realms of mortality and immortality, moralizing and amorality; the passing of time, and how little we have left. These are lurid songs, urgently told through Gareth Liddiard’s barbed and byzantine lyricism, abrasive guitar slashes, drum adrenalin, raunchy bass and electronic undercurrents.