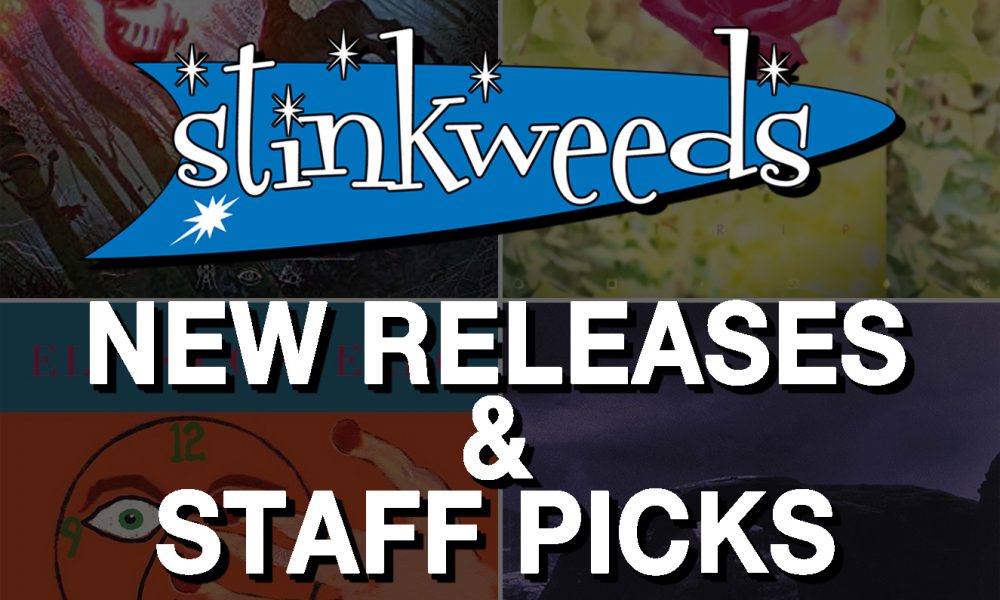 Aesop Rock – Spirit World Field Guide CD/2xLP (Rhymesayers)
Since his debut in the late nineties, Aesop Rock’s writing has been of the highest caliber, but one thing that has continually evolved is his near-flawless and diverse flow, now perfectly infused with his personality and a gift for visual imagery. On Spirit World Field Guide, characters, inanimate objects, and their surrounding environments vividly come to life as Aesop describes each passing moment throughout the album’s twenty-one chapters. Welcome to the Spirit World. Explore with intention. [Limited colored vinyl pressing also available.]

Alice In Chains – Facelift [Reissue/1990] 2xLP+MP3 (Sony Legacy)
30th anniversary standard black vinyl remastered reissue. Not only did the album introduce the world to Layne Staley, Jerry Cantrell, Sean Kinney, and Mike Starr, it was also a pivotal album in the era of grunge music.

Boris – Absolutego [Reissue/1996] 2xLP (Third Man)
Originally released in 1996, Boris’ 60-minute 13-second debut “single” Absolutego is a trek over a staggering mountain of sound. The tension builds with wave after wave of massive feedback, drums leading into a crushing crescendo of full-band repetition and clarity before descending deeper until finally reaching a surreal dive-bomb purring drone finale. This song takes notes out of the Melvins’ playbook and pushes the sound to its absolute logical and visceral extreme. It sets a solid foundation for why Boris is considered to be one of the most important metal bands of the 21st century.

Boris – Amplifier Worship [Reissue/1998] LP (Third Man)
First released in 1998, catalog staple Amplifier Worship is Boris’ most intense and unrelenting album to date. Not for the faint of heart, the group incorporates mythic doom-drones, up-tempo psych-sludge and even a refreshing ribbit into their signature concoction of celestial and heavy music. Amplifier Worship is a critical chapter in the Boris canon. The album is a testament to the group’s bullishness in pushing metal to its uncomfortable and unfamiliar edges. And it’s also undoubtedly one of their best.

Molchat Doma – Monument CD/LP/Cassette (Sacred Bones)
Monument is a fitting title for the third album by Belarusian trio Molchat Doma. Indeed, it stands as a monument to everything they’ve achieved in their short time as a band, from whispered-about unknowns, to enigmatic underground icons, to legitimate viral sensations with hundreds of thousands of TikTok videos using their music. Monument sees them return as conquering heroes, expanding on the minimalist greatness of S Krysh Nashikh Domov and Etazhi to fully realize a more maximalist vision of their crystalline post-punk sound. Written and recorded while the band was quarantined in their hometown of Minsk during the COVID-19 pandemic, Monument is a conscious step up in songwriting and fidelity, and it reveals a band preternaturally comfortable in its own skin. [Limited colored vinyl pressing also available.]

Aaron Frazer – My God Has A Telephone 7″ (Dead Oceans)
Aaron Frazer is best known as the drummer and falsetto voice behind soul mainstays Durand Jones & The Indications. The Brooklyn-based, Baltimore-raised musician also garnered attention for his gospel-inspired project, The Flying Stars of Brooklyn, NY, which released the single “My God Has a Telephone” in 2017.

AC/DC – Power Up CD/LP (Columbia)
Power Up is the long-awaited new album from AC/DC, and the band’s seventeenth studio effort overall. For Power Up, the band reunited with producer Brendan O’Brien who helmed the double-platinum Black Ice in 2008 and the gold Rock Or Bust in 2014. Charged up for the next decade, AC/DC cut twelve new tracks for the album, proudly maintaining their signature sound and all of its powerful hallmarks. “This record is pretty much a dedication to Malcolm, my brother,” Angus says. “It’s a tribute for him like ‘Back In Black’ was a tribute to Bon Scott…All of the tracks that we’ve got on the album were written by me and Malcolm. A lot of them were ideas we had that we knew were good AC/DC ideas at the time. But we just never got around to getting them on record.”

Chris Stapleton – Starting Over CD/2xLP (Mercury Nashville)
CD now, LP early next week! Five-time Grammy Award-winning country superstar Chris Stapleton delivers the highly anticipated new studio album, Starting Over. Of its 14 songs, he co-wrote 11, with a combination of longtime friends and new collaborators including Mike Campbell and Benmont Tench of the Heartbreakers on electric guitar and Hammond B3 organ respectively, as well as equally revered pedal steel player Paul Franklin. The Nashville Urban Choir feature on “Watch You Burn”, written by Stapleton and Campbell. Three hand-picked covers augment the new material, John Fogerty’s “Joy Of My Life” and two by Guy Clark, “Worry B Gone” and “Old Friends”. Starting Over opens with the acoustic-based title track single which finds the talented troubadour and his whiskey-soaked soul vocals imparting, “It don’t matter to me / Wherever you are is where I wanna be / And honey for once in our lives / Let’s take our chances and roll the dice / I can be your lucky penny / You can be my four-leaf clover / Starting over.”

Liam Bailey – Ekundayo CD/LP (Big Crown)
Big Crown Records is proud to present Ekundayo, Liam Bailey’s debut record on the label. This album is a long time in the making, and after listening, clearly worth the wait. It didn’t take a long time to record, but it did take years for all the stars to line up. Bailey, born and raised in Nottingham, England, the son of an English mother and Jamaican father got his early influences from his mom’s record collection. Bob Marley and Dillinger, Stevie Wonder and The Supremes, The Beatles and Jimi Hendrix would eventually shape the singer/songwriter we know today. On the surface, Ekundayo is a weighty Reggae record, full of new and old textured riddims. But listen more in-depth, and you’ll find subject matter that’s more recognizable from a modern-day R&B record.
The Cranberries – No Need To Argue [Reissue/1994] 2xLP (Island)
Digitally remastered. Originally released in 1994, No Need To Argue the second studio album by Irish alternative rock band The Cranberries, was the band’s highest-selling album and features the hit single “Zombie”. [Double CD and vinyl editions include a remaster of the album and three B-sides: “Away”, “I Don’t Need”, and “So Cold In Ireland” from the original tapes plus 19 previously unreleased tracks including two songs never officially released in any format – “Yesterday’s Gone”, recorded unplugged in New York in 1995 for MTV, and a demo of a track “Serious” that has previously only existed as low quality live bootlegs.
Hum – Inlet CD/2xLP+MP3 (Earth Analog)
Hum influenced a generation of shoegaze bands, but their singularly epic sound swirls with ripples of punk and prog, too. Outside of a few scattered live shows, those glorious Hum sonics have lain dormant since the 1997 release of Downward Is Heavenward. Their first new album in 22 years has already won raves from Pitchfork, Stereogum and many others; it’s a stunning return to peak form.

Jesu – Terminus CD (Avalanche Recordings)
Justin K Broadrick is best known as a founding member of Godflesh, one of the first bands to combine elements of extreme metal and industrial music, but has also maintained a parallel career as a producer, producing records and remixes for groups such as Pantera, Isis, Mogwai and Pelican. Since 2005 he has also been creating slow, hazy, and deafening music under the moniker Jesu, and here he returns with Terminus, the first full length standalone album from Jesu since 2013’s Every Day I Get Closer To The Light From Which I Came. Terminus thematically was inspired by the concepts of rejection, dependency, nostalgia, and ultimate loneliness. Musically exploring the entire gamut of the Jesu oeuvre since its initial inception; dream pop, shoegaze, electronica and nonaligned/non genre specific heaviness. [Vinyl edition due November 20.]

Lambchop – Trip CD/LP+MP3 (Merge)
In the fall of 2019, Lambchop’s Kurt Wagner had a unique idea: In lieu of going on what would become an economically disastrous tour, he would invite the band to Nashville to make a record as a way to provide them with similar financial support and realize something tangible in the process. Each band member was tasked with choosing one song for the band to cover, and leading the recording session to completion each day. Trip sounds like a culmination of the band’s older work and current work. There’s a looseness and freedom that recalls their older sound mixed with a group sophistication and innovation derived through the process of playing together for so long.

Quakers – II: The Next Wave CD/2xLP (Stones Throw)
Quakers is an ever-evolving collective of music with core members Geoff Barrow of Portishead and Australian producer Ashely Anderson. True to the group’s collaborative spirit, the producers invited over twenty rappers from the Stones Throw stable and beyond to contribute to II: The Next Wave. Much like Quakers’ self-titled debut, II: The Next Wave is loud, unapologetic and blunted. It’s also more explicitly political, with songs that speak directly to systemic corruption, racism, and the climate crisis.

Bahamas – Sad Hunk LP (Republic)
Recently released on CD – now available on vinyl. The fifth album from Bahamas, Sad Hunk takes its title from a nickname bestowed upon the artist by his wife in reaction to how he was being portrayed in the media, “Something like ten years ago I did a photo shoot, and in all the pictures they sent back I was lit half in shadow, looking all brooding and mysterious,” says the award-winning singer/songwriter otherwise known as Afie Jurvanen. “When my wife saw the photos the first thing she said was, ‘Whoa—sad hunk,’ and after that it became sort of a joke among our friends.” It’s a fitting backstory for an album that embodies an undaunted self-awareness, each track graced with Bahamas’s wry wit and unabashed heart. In sketching Sad Hunk’s delicately composed batch of songs, Jurvanen drew much inspiration from his home life and all the joy and struggle that comes with building a family together. [Limited purple colored vinyl pressing also available.]

Elvis Costello – Hey Clockface 2xLP (Concord)
Recently released on CD – now available on vinyl. Recorded in Helsinki, Paris and New York, Hey Clockface is the latest Elvis Costello and Sebastian Krys production, following their collaboration on Elvis Costello and The Imposters’ Grammy-winning album Look Now. Hey Clockface also features contributions from Bill Frisell, Nels Cline and Steve Nieve. “I wanted the record to be vivid, whether the songs demanded playing that was loud and jagged or intimate and beautiful,” Costello said of the project’s emotional and dynamic range.”

Felt – Felt 4 U 2xLP (Rhymesayers)
Recently released on CD – now available on custom pink and teal colored vinyl. After an 11-year hiatus, Murs and Slug are back with their fourth Felt album. Sonically, Felt 4 U is overflowing with the influences of funk, soul, blues and even country flavors.

Mark Pritchard – MP Productions LP (Warp)
Mark Pritchard returns with a six-track club-ready EP fronted by first offering “Be Like Water”. Most of the tracks on this EP were first played in his WXAXRXP NTS mix last year. MP Productions EP 1 will be available on 12″ via Warp on 13th November. The AI-infused artwork is designed by longtime collaborator Jonathan Zawada. This EP sees Pritchard dip into a slew of alias that have kept him busy over the years. This new club 12″ nods to his mesmerizing formulas for making dance music, carrying the listener through grime, electronic and Afrika HiTech territory. “Be Like Water” is a devilish 8 bar grime instrumental. Harking back to an early ’00s grime sound, Pritchard manipulates loops of distorted flutes, hollow chords and pentatonic scales to find an energy which is exciting, addictive and perfect for the club