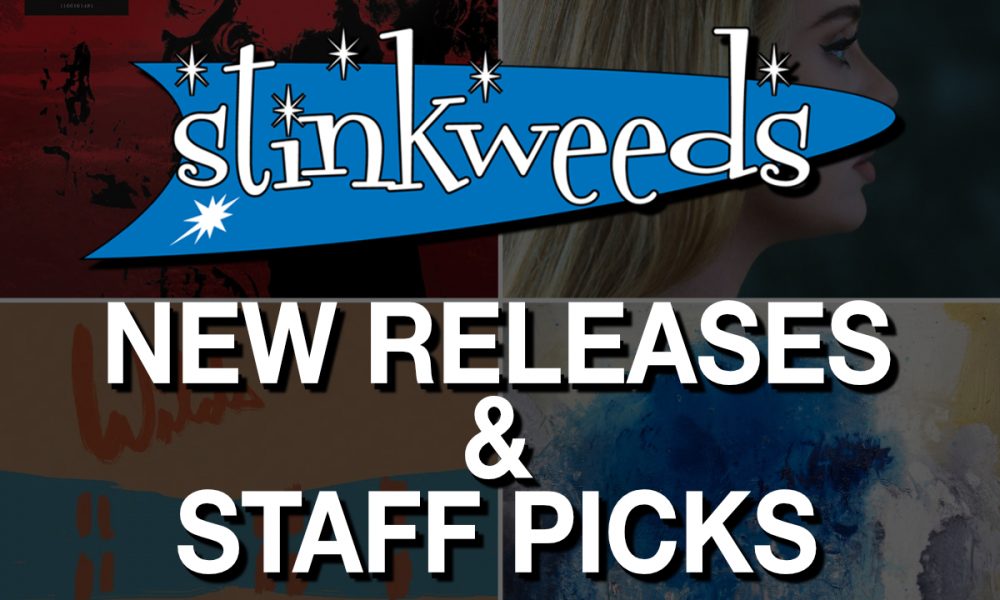 Few artists are storytellers as deft and disarmingly observational as Andy Shauf. The Toronto-based, Saskatchewan-raised musician’s songs unfold like short fiction: they’re densely layered with colorful characters and a rich emotional depth. Like he’s done throughout his career, Shauf wrote, performed, arranged, and produced every song on his new album Wilds at his studio space in the west end of Toronto.

Helvetia – Essential Aliens CD/LP (Joyful Noise)
Helvetia is the solo project of Jason Albertini from Duster. Essential Aliens distills and simplifies the Helvetia sound. Reverb and delay are absent, replaced by warm fuzz and intimate room sounds. Progressions morph with stoner repetition and end in head scratch. Drums distort, muted bass lines prop up acoustic guitars blown out on a cassette four-track. Cheap electric guitars are barely in tune and recorded direct, almost painfully in your face. The songs are short blasts of psychedelic chill, unrooted by genre, a rummage around an alien radio dial. [A limited-edition clear vinyl pressing is also available.]

CD and double vinyl LP pressing. 2021 release. 30 is the first new music from Adele since the release of her third studio album 25 in November 2015. The album is produced with longtime collaborators Greg Kurstin, Max Martin and Shellback and Tobias Jesso Jr as well as new collaborators Inflo and Ludwig Goransson.
Robert Plant / Alison Krauss – Raise The Roof CD/LP (Rounder)

Available on CD, 2LP 180 gram gatefold jacket and indie exclusive LP with alternate cover art!  In 2007, Robert Plant & Alison Krauss released Raising Sand, one of the most acclaimed albums of the 21st Century. It was an unlikely, mesmerizing pairing of one of rock’s greatest frontmen with one of country music’s finest and most honored artists, produced by the legendary T Bone Burnett. Now, after 14 years, they return with Raise the Roof, 12 songs from a range of traditions and styles that extend this remarkable collaboration in new and thrilling directions.

Beach Fossils – The Other Side Of Life: Piano Ballads CD/CASS (Bayonet)

CD and Cassette now, LP Jan 14th. Inspired by a love of artists such as Bill Evans, Lester Young, Chet Baker and Vince Guaraldi, Dustin Payseur reimagines some of his greatest hits from the Beach Fossils catalog alongside a group of formally trained jazz musicians. A rich and mellow mix of piano, saxophone, upright bass and brushed drums explore the contours of familiar songs, soaring Payseur’s melancholic harmonies to new heights.

Primal Scream – Live at Levitation LP (Reverberation Appreciation)
On pink and black splatter vinyl. Primal Scream’s fusion of indie pop and dance broke down musical boundaries and changed the face of British pop music in the ’90s, helping to push dance and techno into the rock mainstream. Their lasting influence is crystallized across nine tracks, on Primal Scream – Live At Levitation. Recorded in 2015 at Levitation in front of underground rock fans from around the world, the LP marks the next release in The Reverberation Appreciation Society’s Live at Levitation series, which captures key moments in psychedelic rock history and live music in Austin, Texas – pulled from Levitation’s extensive archives.

Aesop Rock – Labor Days [Reissue/2001] 2xLP (Block Block Chop)
Limited color vinyl pressing of the third studio album by Aesop Rock, originally released by EL-P’s Definitive Jux label in 2001. The 14-track double album is regarded as Aesop’s definitive collection, featuring production work from Blockhead and Omega One and guest appearances from the likes of Illogic and C-Rayz-Walz. Dark dense beats and intricate rhyme flows weave in and out on this conceptual album about work.

King Gizzard And The Lizard Wizard – L.W. Live In Australia LP (We Are Busy Bodies)
Live, bootlegger version of L.W. compiled from 2021 Australian performances. Mastered by Noah Mintz of Lacquer Channel Mastering. The album features a reverse groove and is pressed on clear vinyl.

The Weeknd – The Highlights LP (XO Records)
Double vinyl LP pressing. 2021 release, a career-spanning album from The Weeknd pulling together a collection of his biggest songs from the last ten years.

Available on neon green vinyl. 2021 release, the third installment in the band’s New Age Norms series. Over their career, Cold War Kids have fielded music’s seismic shifts while simultaneously sticking to their own game plan. Over the course of more than a dozen releases – including studio albums, multiple EPs, and a live album, non-stop tours and the festival circuit’s biggest stages, massive radio, sales and streaming successes, the band has become a major part of the modern landscape. Their album New Age Norms 3 is the next chapter with the approach of taking apart the idea of what the band is and just trying to take the doors off a bit to see where it can go.
Colter Wall – Live In Front Of Nobody LP (La Honda)
Colter Wall hosted the Live In Front Of Nobody livestream concert with The Scary Prairie Boys, as a livestream in March of 2021. Features songs from his most recent album, 2020’s Western Swing & Waltzes and Other Punchy Songs—as well as “some special covers and a few surprises.” Limited edition colored vinyl.
Black Dice – Mod Prog Sic LP (Four Four Records)
Mod Prog Sic, Black Dice’s seventh album and first since 2012’s Mr. Impossible, continues their uncompromising approach. You don’t raise your hands in exultation to Black Dice’s club bangers; you use them to cup your skull in confusion. Like their best work, it sounds at once meticulous and reckless, sinister and goofy.
Manchester Orchestra – Christmas Songs Vol 1 CD/LP (Loma Vista)
2021 holiday release. A collection of holiday classics reimagined earnestly and passionately by beloved indie rock stalwarts Manchester Orchestra. Familiar, inclusive, and the essence of holiday spirit, regardless of one’s beliefs
Brand New – The Devil and God Are Raging Inside Me LP reissue LP (Procrastinate Music)
Double vinyl LP pressing. The Devil and God Are Raging Inside Me is the third studio album by Brand New. It was recorded from 2005 to 2006 in studios in Long Island and Massachusetts with producer Mike Sapone, and released on November 21, 2006 through Interscope Records, making it their major label debut. Two singles from the album were released: “Sowing Season” and “Jesus Christ”. The album peaked at #31 on the Billboard 200, becoming the band’s highest-charting record at the time of its release.
Twenty One Pilots – Scaled and Icy LP (Fueled By Ramen)
Available on black and limited edition clear vinyl. Written and largely produced by Joseph in isolation over the course of the past year at his home studio, with Dun engineering the album’s drums from across the country, Scaled And Icy is the product of long-distance virtual sessions and finds the duo processing their upended routines along with the prevailing emotions of 2020 – anxiety, loneliness, boredom, and doubt. The duo had to forgo their normal studio sessions but reached a new of level of introspection in the process, adopting a more imaginative and bold approach to their songwriting. The result is a collection of songs that push forward through setbacks and focus on the possibilities worth remembering.

Cody Jinks – Mercy LP (Late August)
What Cody Jinks has become is arguably the preeminent independent artist in all of country music. Sure, you could also cite Tyler Childers, or maybe Sturgill Simpson as candidates for that position. But both had their dalliances with major labels, while Cody Jinks has now gone completely independent, with no label support at all. In fact, this new release didn’t even employ a publicist to help promote it. It’s just Cody, and his fans. Available on black and opaque white vinyl.

Converge – Bloodmoon: I CD (Epitaph)
CD now, limited-edition indie store exclusive vinyl due June 24. Converge release their new album with Chelsea Wolfe, her frequent collaborator and bandmate Ben Chisholm, and Cave In’s Stephen Brodsky. It’s called Bloodmoon: I and was produced by Converge’s Kurt Ballou, and the musicians began collaborating for the prospective project in 2016. “The project stretched my vocals in new ways,” Wolfe said in a statement. “It’s so different from what I normally sing over that I was able to open up and be vulnerable with my vocals.”

Jackie Mittoo – The Keyboard King At Studio One [Reissue/2001] 2xLP (Soul Jazz)
20th anniversary special one-off pressing blue color vinyl gatefold sleeve edition. This compilation features music Mittoo recorded as a solo artist (as opposed to the numerous singers that he accompanied). Most of these are taken from his recordings in the mid-‘60s where he was recording on an almost daily basis at Studio One’s Brentford Road studios developing the funky reggae sound that was his trademark.

Sharon Van Etten – Silent Night b/w Blue Christmas 7” (Jagjaguwar)
Clear blue color vinyl single. “Silent Night“ was recorded in 2018 for the Holiday Short Film, The Letter by Eric Paschal Johnson and received a Vimeo Staff Pick Award and is now available on vinyl for the first time. The B-side is Van Etten’s cover of the holiday classic “Blue Christmas,” which was originally recorded for a benefit album called Do You EAR What I Ear in 2009 for the Association to Benefit Children, an outstanding New York-based service dedicated to permanently breaking the cycles of abuse, neglect, sickness and homelessness among disadvantaged children and their families.

Various Artists [Coldcut] – @0 2xLP (Ahead Of Our Time)
@0 is a collection of ambient tracks – curated by Coldcut – to benefit mental health, featuring some incredible names in the ambient world including Sigur Rós, Julianna Barwick, Ryuichi Sakamoto, Suzanne Ciani, Laraaji, Kaitlyn Aurelia Smith, A Winged Victory For The Sullen, and many more.

Thrice – Horizons / East LP (Epitaph)
With Horizons/East, Dustin Kensrue and his bandmates address, with candor and courage, the fragile and awkward arrangements that pass for civilization, while inviting us to dwell more knowingly within our own lives. Without surrendering any of the energy and hard edge of their previous albums, they’ve given us a profoundly meditative work which serves as a musical summons to everyday attentiveness.