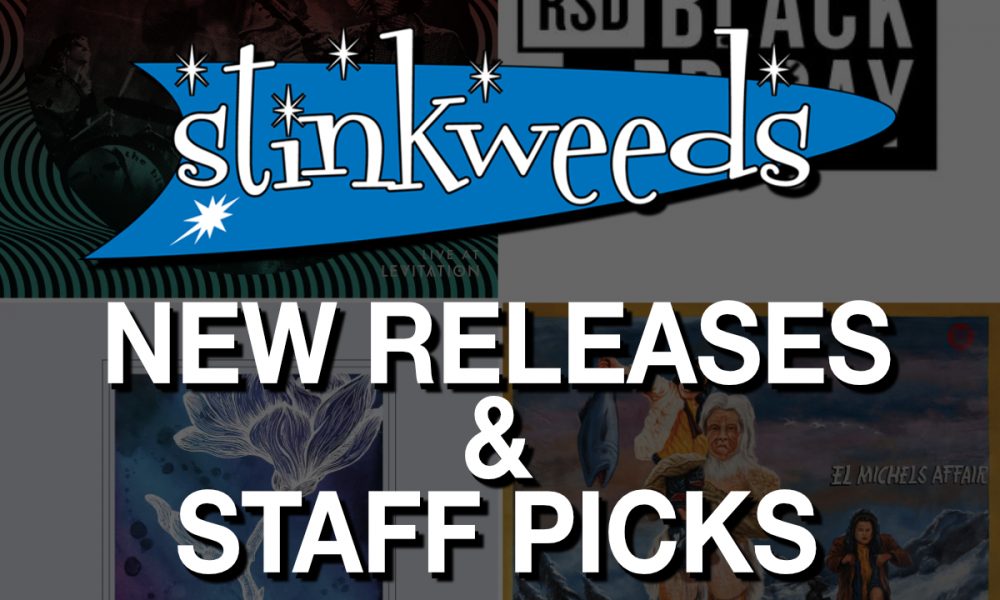 RSD Black Friday – Check the complete list here. We will have most of everything. Titles go fast, one per customer. All sales are IN PERSON, starting Friday at 8AM. NO phone orders!

Jason Isbell and The 400 Unit – Georgia Blue CD (Southeastern)
“Georgia Blue is a labor of love. On election day 2020, when I saw that there was a good chance the state of Georgia might go blue, I came up with an idea: to record an album of Georgia-related songs as a thank you to the state and donate the money to a Georgia-based non-profit organization. I will admit my motivations were a bit selfish. For years, I’ve been looking for an excuse to record these songs with my band and some friends. The songs on this album are some of my favorite Georgia-related songs, but the tracklist is not meant to be comprehensive. I would love to cover Outkast and 2 Chainz, but I don’t think the finished product would be very good. We’re a rock band, so we covered rock songs. We have roots in blues and R&B, so we enlisted some brilliant artists to help us pull off songs by Precious Bryant, James Brown, and Gladys Knight. My favorite part of the Georgia Blue recording process was having the opportunity to work with these very special artists, and I thank them: Amanda Shires, Brittney Spencer, Adia Victoria, Brandi Carlile, Julien Baker, Bèla Fleck, Chris Thile, Steve Gorman, Peter Levin, and John Paul White. I hope you enjoy listening to these recordings as much as we enjoyed making them. Keep listening to good music and fighting the good fight.” [Special RSD Black Friday vinyl pressing is also available.]

Helmet – Live And Rare CD/LP (earMUSIC)
Live archive release. On January 27th, 1990, Helmet entered the stage of New York’s equally famous and infamous CBGB’s. What followed was an explosive live show, set during the earliest days of the band’s career. Getting ready to release their debut album Strap It On in March that year, Helmet propelled themselves through a staccato-heavy set of tracks that would soon earn them worldwide acclaim in the punk scene.

The Black Angels – Live At Levitation LP (Reverberation Appreciation Society)
Limited multicolor vinyl LP pressing. Levitation (formerly known as Austin Psych Fest) began as a simple idea in a Black Angels tour van in 2007 – “let’s invite all our favorite bands and all our friends, for our version of a music festival.” The first Austin Psych Fest was held in March 2008 and expanded to a three-day event the following year. From there the festival quickly developed into an international destination for psychedelic rock fans, with lineups spanning the fringes of indie rock, from up-and-comers to vintage legends, and capped off with headlining performances from The Black Angels each year.

The Colorist Orchestra & Howe Gelb ft. Pieta Brown – Not On The Map LP (Dangerbird)
Recently reissued on CD – now available on limited-edition clear vinyl. Avant-garde chamber pop ensemble The Colorist Orchestra has stuck thus far to reimagining other artists’ works. Led by Aarich Jespers and Kobe Proesmans, the group uses traditional classical and bespoke instrumentation, often played in unorthodox ways, to meticulously rework an invited artist’s music into new styles and forms. However, Not On The Map, their collaborative album with Giant Sands’ Howe Gelb, breaks new ground for the ensemble as they come forth with an entire album of original collaborations. Aarich Jespers describes the album as “soft and dark.” “The layer of low, muted toms is present in almost every song. The tempo of the album is also rather slow, ideal for sitting with a glass of whiskey in hand.”