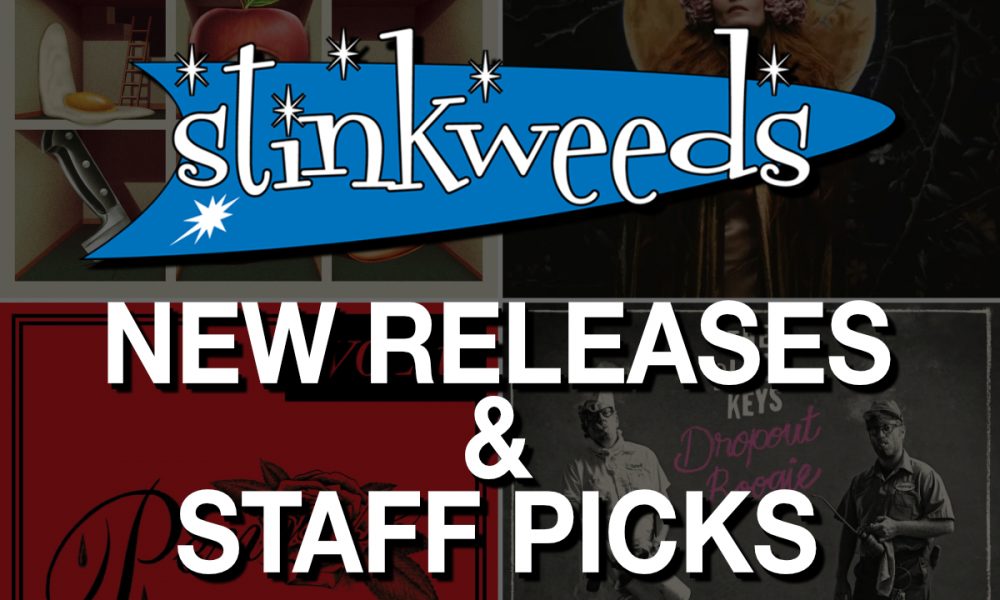 Killer Mike – R.A.P. Music [Reissue/2012] 2xLP (Watertower Music)
R.A.P. Music, the fifth studio album by rapper Killer Mike was originally released in 2012 and is finally back in-print on vinyl. Production was handled by rapper and producer Jamie “El-P” Meline; the album was the first collaboration between Killer Mike and El-P, who would later form the critically acclaimed duo Run The Jewels. [A limited-edition green color vinyl pressing is available.]

The Black Keys – Dropout Boogie CD/LP (Nonesuch)
After 10 albums, the last five of which have gone top 10 or better, six Grammy awards, and sold-out tours around the world, The Black Keys are back: The duo, called “one of the best rock ‘n’ roll bands on the planet” by Uncut, delivers its eleventh studio album, Dropout Boogie. Ushered in by lead single, “Wild Child”, Dropout Boogie features collaborations with Billy F. Gibbons (ZZ Top), Greg Cartwright (Reigning Sound), and Angelo Petraglia (Kings Of Leon). As they have done their entire career, the duo of Dan Auerbach and Patrick Carney wrote all the material in the studio, and the new album captures several first takes that hark back to the stripped-down blues rock of their early days making music together in Akron, Ohio, basements. [An indie store exclusive white color vinyl pressing is available. Includes bumper sticker while supplies last.]

Monophonics – Sage Motel CD/LP (Colemine)
Monophonics cordially invite you to attend the grand re-opening of the once thriving, once vibrant establishment, the legendary Sage Motel. A place where folks experience the highs and lows of human existence. A place where big dreams and broken hearts live, where people arrive without ever knowing how they got there. It’s where folks find themselves at a crossroads in life. [An indie store exclusive transparent orange color vinyl pressing is available.]

Kevin Morby – This Is A Photograph CD/LP+MP3 (Dead Oceans]
Produced by Sam Cohen (who also worked on Morby’s Singing Saw and Oh My God), This Is A Photograph features musical contributions from longtime staples of Morby’s live band, as well as old friends and new collaborators alike. If Oh My God saw Morby getting celestial and in constant motion and Sundowner was a study in localized intent, This Is A Photograph finds Morby making an Americana paean, a visceral life and death, blood on the canvas outpouring. As Morby reminds us early on, time is undefeated. So, what do we do while we’re still here? This is a photograph of that sense of yearning. [A limited-edition ‘gold nugget’ color vinyl pressing is available.]

Lyle Lovett – 12th Of June CD/LP (Verve)
Lyle Lovett’s first album in over 10 years, 12th Of June, combines Lovett’s famed gift for storytelling with his customized fusion of jazz, country, western swing, folk, gospel, and blues elements in his music. It’s a much-anticipated new entry to a 14-album career in which he became the winner of the Americana Music Association’s inaugural Trailblazer Award in 2014. His other career distinctions have included being named Texas State Musician and a member of both the Texas Heritage Songwriters’ Association Hall of Fame and the Texas Cowboy Hall of Fame.

Tank And The Bangas – Red Balloon CD/LP (Verve)
Best New Artist Grammy nominee and critically acclaimed band Tank And The Bangas return with their third studio album, Red Balloon. The new long-player was born out of a pandemic-ordered break from the band’s rigorous touring schedule. The hiatus gave the band space to grow, allowing them to reunite as a more unified group. This new work pushes the band to a new level, shedding light on their unique observations and reflecting on the ills of America while also celebrating the beauty of Black life. “This has been one of the best attempts thus far at capturing what happens when we’re all playing at the same time,” notes the band. “Red Balloon is coming straight for your heart and your neck. It’s going to make you bop and think and love, hopefully, and even love people that look different.”

Florence + The Machine – Dance Fever CD/2xLP (Republic)
Florence + The Machine’s fifth studio album, Dance Fever was written and produced through the haze of two lockdowns in London and NYC with producers Jack Antonoff and Dave Bayley (Glass Animals). It sees Florence at the peak of her powers, coming into a fully realized self-knowledge, poking sly fun at her own self-created persona, playing with ideas of identity, masculine and feminine, redemptive, celebratory, stepping into her place in the iconic pantheon. The LP nods to dance, folk, ‘70s Iggy Pop, longing-for-the-road folk tracks a la Lucinda Williams or Emmylou Harris and more, ultimately arriving somewhere that Florence describes as “Nick Cave at the club.” [An indie store exclusive grey color vinyl pressing, is available.]

Maserati – 37:29:24 [Reissue/2001] CD/LP+MP3 (Temporary Residence)
Maserati is a band from Athens, Georgia whose sound is best described as a combination of post-rock and psychedelic influences. Their music is instrumental, relying on the standard rock instrumentation of guitar, bass, and drums.

Moderat – MORE D4TA CD/LP (Monkeytown)
Created largely during a time when touring (and most traveling) was off the table, MORE D4TA is an album that wrestles with feelings of isolation and information overload-issues that have become particularly pronounced over the past two years. The ten songs on MORE D4TA are rooted in collaboration, but long before any of its tracks were laid down, Moderat spent months hanging out and getting musically reacquainted, indulging in extended bouts of experimentation, and slowly fleshing out ideas as they dove into modular composition, field recordings and other sonic oddities. But no matter how far the band ventures into music’s outer realms, they always wind up back in their own unique soundworld, a place where emotive pop and fluttering electronic soundscapes walk hand in hand. [A deluxe 180gm vinyl pressing is available.]

Amyl and The Sniffers – Comfort To Me 2xLP (ATO)
Double clear smoke color vinyl pressing. The second album from Amyl and The Sniffers, is both heavier and more awesome than their debut. MOJO Magazine raved, “Skin-shedding, lethal, self-sufficient, cool – no wonder Amy Taylor digs snakes. With Comfort To Me, she proves she can be whoever she wants while The Sniffers confound preconceptions of how a great rude and righteous rock n’ roll band can still be.”

Alex Chilton – High Priest [Reissue/1987] LP (Bar/None)
Limited-edition sky-blue color vinyl repress with rare vacation photos. “What it lacks in polish, it more than makes up in charm, verve and just plain ol’ soul. This could be what rock ‘n’ roll is all about” – Trouser Press. 1987’s High Priest was the first full-length album since 1979’s Like Flies On Sherbert from Big Star front man Alex Chilton.

Dälek – Precipice 2xLP (Ipecac)
Recently release on CD – now available on vinyl (including an indie store exclusive gold color pressing). For their 2022 release – and eighth album overall – Precipice, Dälek unleashes a work that is practically bristling with fury and power. Predominantly the work of the core duo, Will Brooks, aka MC Dälek and Mike Manteca (Mike Mare), Precipice features a guest appearance of Adam Jones of Tool on one of the album’s tracks.

The Dillinger Escape Plan-  Irony Is A Dead Scene [Reissue/2002] 12”+MP3 (Epitaph)
Limited orange with black and white splatter color vinyl pressing of the third EP by the mathcore band.

Keb’ Mo’ – Good To Be… 2xLP (Rounder/UMGD)
Released earlier this year on CD – now available on vinyl (including an opaque red color pressing). Written partially in Nashville and partially in the Compton house 5x Grammy-winner Keb’ Mo’ grew up in, Good To Be… weaves together past and present into a heartwarming tapestry spanning more than 40 years of sonic evolution. Joined by a variety of collaborators, including Vince Gill, famed producer Tom Hambridge, Darius Rucker, and Kristin Chenoweth, Good To Be… is a deeply cohesive and optimistic collection of music about appreciating what you’ve got, where you come from, and who you get to share it with.

Roxy Music – Stranded [Reissue/1973] LP (Republic)
Roxy Music – Country Life [Reissue/1974] LP (Republic)
Vinyl reissues of Roxy Music’s third and fourth albums. Stranded gave Roxy Music their first #1 album in the UK and brought with it an undeniable presence that would see the American audience take note. It was becoming all too clear that Roxy Music was ahead of their time. Country Life is deemed to be Roxy Music’s most consistent and sophisticated album. Musically and lyrically, the album has been considered more cynical and hard rocking than their previous work.

School Of Seven Bells ‎– SVIIB [Reissue/2016] LP (Vagrant)
Color vinyl reissue. Throughout 2012 School Of Seven Bells was working on a follow up to the critically acclaimed Ghostory. When producer/guitarist Benjamin Curtis was diagnosed with T-Cell Lymphoblastic Lymphoma in 2013 the band took a break. Prior to passing, Benjamin had recorded his portion of the record in its entirety, both before he was diagnosed and after, between treatments. Alejandra Deheza picked up where they left off and finalized what would become 2016’s SVIIB, the band’s fourth and final album.

Christian Death – Evil Becomes Rule (Season Of Mist)
With the release of their seventeenth studio album, Christian Death shows no signs of faltering or slowing down. The godfathers of death rock have simultaneously perfected and redefined their signature sound, which has served as a core inspiration for many bands of both the past and present, such as Danzig, Celtic Frost, and Type O Negative, to name just a few. Evil Becomes Rule isn’t merely a musical endeavor, but an artistic expression that blends elements of gothic rock, post-punk, and dark pop, cultivating a poetic aesthetic that is certain to continue to influence the next wave of gothic rock.
Bad Brains – Self Titled LP reissue (Org)
Limited transparent red colored vinyl LP pressing. Bad Brains is the self-titled debut studio album recorded by American hardcore punk/reggae band Bad Brains. Recorded in 1981 and released on (then) cassette-only label ROIR on February 5, 1982, many fans refer to it as “The Yellow Tape” because of its yellow packaging. Though Bad Brains had recorded the 16 song Black Dots album in 1979 and the 5-song Omega Sessions EP in 1980, the ROIR cassette was the band’s first release of anything longer than a single.
COMING NEXT WEEK!
MAVIS STAPLES + LEVON HELM – Carry Me Home CD/LP
HARRY STYLES – Harry’s House CD/LP
PUSHA T – It’s Almost Dry CD
VAN MORRISON – What’s It Gonna Take CD/LP
CAVE IN – Heavy Pendulum CD/LP
ARCA – Kick Ii, Iii,Iiii, Iiiii CD/LP
JOHN DOE – Fables In A Foreign Land CD/LP
GRANT LEE PHILLIPS – All That You Can Dream CD/LP
LAURA JANE GRACE (Tanya Donelly) – Strange Mornings In The Garden CD/LP
CLAYPOOL LENNON DELIRIUM – Monolith Of Phobos LP
ARRESTED DEVELOPMENT – For The Fkn Love LP
KNXWLEDGE – 1988 LP (colored)