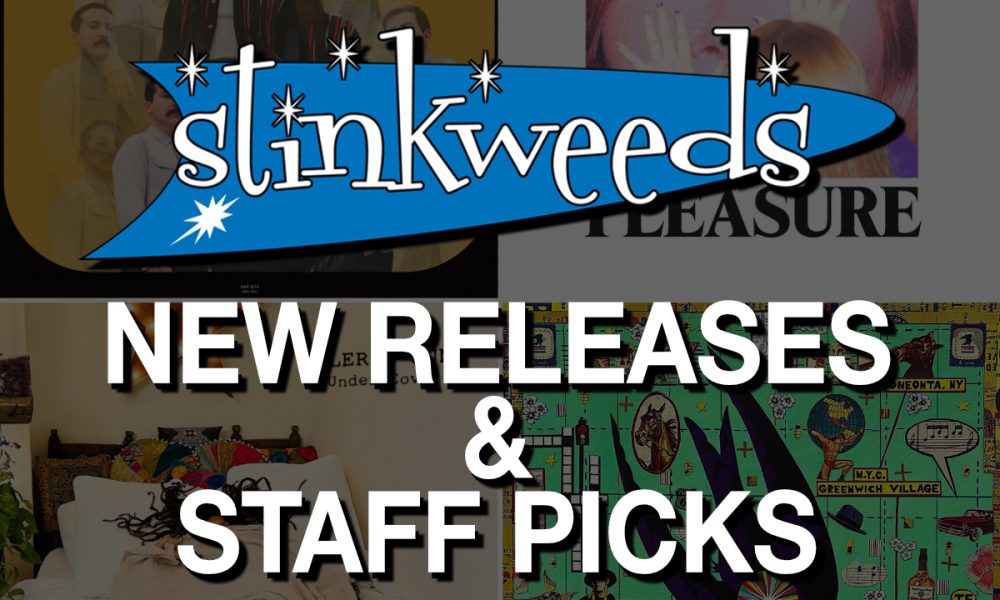 THEE SACRED SOULS – Thee Sacred Souls CD/LP (Penrose)
For Thee Sacred Souls, the first time is often the charm. The band’s first club dates led to a record deal with the revered Daptone label. Now, the breakout San Diego trio is ready to deliver yet another landmark first with the release of their self-titled debut. Produced by Bosco Mann (aka Daptone co-founder Gabriel Roth), Thee Sacred Souls is a warm and textured record, mixing the easygoing grace of sweet ’60s soul with the grit and groove of early ’70s R&B, and the performances are utterly intoxicating, with Lane’s weightless vocals anchored by the rhythm section’s deep pocket and infectious chemistry. Hints of Chicano, Philly, Chicago, Memphis, and even Panama soul turn up here, and while it’s tempting to toss around labels like “retro” with a deliberately analog collection like this, there’s also something distinctly modern about the band that defies easy categorization, a rawness and a sincerity that transcends time and place.
KENDRICK LAMAR – Mr Morale & The Big Steppers LP (Interscope)
Double vinyl LP pressing is finally here! Mr. Morale & the Big Steppers is Kendrick’s fifth studio album. The album features narration by Whitney Alford and Eckhart Tolle, and guest appearances from Blxst, Amanda Reifer, Sampha, Taylour Paige, Summer Walker, Ghostface Killah, Baby Keem, Kodak Black, Sam Dew, Tanna Leone, and Beth Gibbons of Portishead. Lamar reunited with frequent collaborators Sounwave, J. Lbs, DJ Dahi, and Bekon for the majority of the album’s production.
STEVE EARLE AND THE DUKES – Jerry Jeff CD/LP (New West)
Steve Earle has been creating intimate and personal music for well over four decades now. His songwriting has wound itself along a path from Texas to Tennessee and his education came in the form of learning from the best. 2009’s Grammy-nominated record, TOWNES was a tribute to his dear friend and mentor, Townes Van Zandt. Ten years later Earle released, GUY, an album concentrated on paying homage to the late Guy Clark and the indelible friendship that they had formed in stories told through song. 2022 welcomes the release of JERRY JEFF. A 10-song collection of songs written by the gypsy songman, Jerry Jeff Walker. Featuring hits like, “Mr Bojangles” and “Gettin’ By”, Earle & The Dukes honor the late Texan by amplifying the concept and sound of each song with a full-band recording.
BRAXE + FALCON – Step by Step EP LP (Smugglers Way)
Alain and Stephane Queme, or Alan Braxe and DJ Falcon, are indisputable architects of the French Touch – the emotive house music conjured from looped samples with an inimitable Gallic flare that emerged from Paris in the mid 90s.
In 2022 these two originals will present their first ever collaboration as Braxe & Falcon in the form of the Step By Step EP, released on Smugglers Way. The release represents a sublime distillation of their shared musical essence, a revelatory realization and a compelling expansion only conceivable for them at this point in time.
MUSE – Will Of The People CD/LP (Warner)
This album was created in Los Angeles and London and is influenced by the increasing uncertainty and instability in the world. A pandemic, new wars in Europe, massive protests & riots, an attempted insurrection, Western democracy wavering, rising authoritarianism, wildfires and natural disasters and the destabilisation of the global order all informed Will Of The People. It has been a worrying and scary time for all of us as the Western empire and the natural world, which have cradled us for so long are genuinely threatened. This album is a personal navigation through those fears and preparation for what comes next.
JULIA JACKLIN – Pre Pleasure CD/LP (Polyvinyl)
Pre Pleasure, the beautiful new full-length album from Australian native Julia Jacklin, finds the musician at her absolute peak, delivering ten of the most personal, raw, and devastating songs of her career. Featuring stand-outs such as “Lydia Wears A Cross,” “Love, Try Not To Let Go,” and the driving “I Was Neon,” the album is a clear portrayal of Jacklin’s captivating strength as a lyricist, and her undeniable talents as one of the most gifted songwriters of the decade.
SILK SONIC – An Evening With Silk Sonic LP (Atlantic)
LP version is finally here! An Evening with Silk Sonic is the debut studio album by American R&B duo Silk Sonic, composed of recording artists Bruno Mars and Anderson. Paak. Recording sessions for An Evening with Silk Sonic took place in 2017 and between early 2020 to mid-2021 at Shampoo Press & Curl Studios.
LUPE FIASCO – Drill Music In Zion CD/LP (1st & 15th Prod)
Twisting and contorting the English language to fit the meter and his every whim, Lupe Fiasco uses his superb lyrical skill to process the changing world in which he lives. Drawing connections between the concrete and spiritual in his hometown of Chicago, Lupe announces Drill Music in Zion, his 8th full length album. The product of a burst of thoughtful spontaneity, Lupe created the new album over a short period, diving into a folder of beats sent by his longtime producer Soundtrakk and emerging with a fully-realized album in just three days.
BLONDIE – Against The Odds 1974-1982 3CD/4LP (Capitol)
From the first-ever authorized and in-depth archive in Blondie’s history, this 3CD/4 LP black vinyl set features the very best of the outtakes and rarities from the Super Deluxe Collector’s Edition, remastered from the original analog tapes and cut at Abbey Road Studios. Included is a (164 pg book for CD version) 112-page book featuring an exhaustive look at Blondie’s international notoriety via picture sleeves and regional pressings
MADLIB – Medicine Show 3 Beat Konducta In Africa LP (Madlib Invazion)

THE DRUMS – Portamento LP (Frenckilss)
RSD Essential limited reissue on clear vinyl.
CHRIS FORSYTH – Evolution Here We Come CD/LP (No Quarter)
To wit, if you think you know already what you’ll be getting into here-heady, Television-esque multi-guitar jams played with motorik precision and a fiercely American intensity: you know, a Forsyth record-well, go ahead and think that. Only… maybe the pulsing bass, curiously lurching drumbeat, and lunar synth squiggling of Sun Ra Arkestra maestro Marshall Allen that opens “Experimental & Professional” will set you back on your heels. But just for a moment, before Ryan Jewell’s drums and Tortoise alum Douglas McCombs’s bass twine into perfect alignment and then guitars-played by Forsyth and Tom Malach (of Garcia Peoples)-start chipping and hammering, twittering and sparring, the whole thing managing to evoke Remain in Light without sounding remotely like it.
WET – Pink Room LP (Secretly Canadian)
Wet’s most natural-feeling and playful songs to date. They’ve toured with The 1975, Florence + the Machine, and Toro y Moi.
VALERIE JUNE – Undercover CD/LP (Fantasy)
Under Cover is a special collection of cover songs curated and performed by GRAMMY-nominated artist Valerie June. Features singular interpretations of some of her favorite songs including Mazzy Star’s “Fade Into You,” Frank Ocean’s “Godspeed,” Nick Drake’s “Pink Moon,” and more.
MARCUS KING – Young Blood CD/LP (American)
25-year-old GRAMMY-nominated artist Marcus King releases his new album Young Blood, produced by Dan Auerbach of The Black Keys. He has toured with The Marcus King Band for over 10 years, as well as tours with Chris Stapleton, Greta Van Fleet, and Nathanial Rateliff. He’s released 3 LPs with The Marcus King Band before his GRAMMY-nominated 2021 solo debut LP, El Dorado.
THE BLED – Found In The Flood LP (Vagrant)
Limited edition colored reissue. Found In The Flood was the second studio album from Arizona hardcore / punk band The Bled, originally release in August 2005.
DELICATE STEVE – After Hours LP (Anti)
Now available on LP! Written and recorded on a white 1966 Fender Stratocaster that reignited his love for the instrument, Delicate Steve’s warm and captivating album, After Hours, marks a first for Steve Marion, an earnest, easygoing collection that revels in the simple joys of plugging in and playing. The songs are sweet and breezy here, pairing vintage soul grooves with mesmerizing, wordless melodies, and Marion’s production work is subtle and restrained, stepping back in all the right places to let the album’s masterful performances speak for themselves. In another first, Marion teamed up with outside musicians on the record, bringing in renowned bassist Shahzad Ismaily (Yoko Ono, Marc Ribot) and famed Brazilian percussionist Mauro Refosco (David Byrne, Atoms For Peace) to help flesh out the arrangements and stretch his sonic boundaries. The result is a dreamy, introspective album built for late night comedowns and deep dive soul searching, a cinematic, escapist fantasy for the wee hours of the morning that draws on everything from Bill Withers and Sly Stone to Pharoah Sanders and Salvador Dali as it explores memory and nostalgia, instinct and intuition, serenity and transcendence.
MOBY – Play LP (D.E.F.)
Double vinyl LP pressing. Play is the fifth studio album by electronic musician Moby, originally released in 1999. Moby’s goal for Play was to return to this style of music, blending downtempo with blues and roots music samples. Originally intended to be his final record, the album was recorded at Moby’s home studio in Manhattan, New York. Play was both a critical success and a commercial phenomenon. The album introduced Moby to a worldwide mainstream audience, not only through a large number of hit singles that helped the album to dominate worldwide charts for two years, but also through unprecedented licensing of its songs in films, television shows, and commercials. Play eventually became the biggest-selling electronica album of all time, with over 12 million copies sold worldwide.
MAVIS STAPLES – We’ll Never Turn Back LP (Anti)
Limited 15th Anniversary aqua blue vinyl LP pressing. We’ll Never Turn Back is the seventh studio album by gospel and soul singer Mavis Staples. Recorded in 2007 and produced by roots rock and blues musician Ry Cooder, it is a concept album with lyrical themes relating to the Civil Rights Movement of the 1950s and 1960s.
COMING NEXT WEEK!
YUNGBLUD – Self-Titled CD/LP
STEREOLAB – Pulse Of The Early Brain (Switched On Vol 5) CD/LP
CALEXICO – Garden Ruin LP reissue
CODEINE – Dessau LP reissue
LEAN YEAR – Sides CD/LP
NOFX – White Trash CD/LP
PIANOS BECOME TEETH – Drift LP
DAVID SYLVIAN – Manofon LP
MEGADETH – Sick, The Dying and the Dead CD/LP