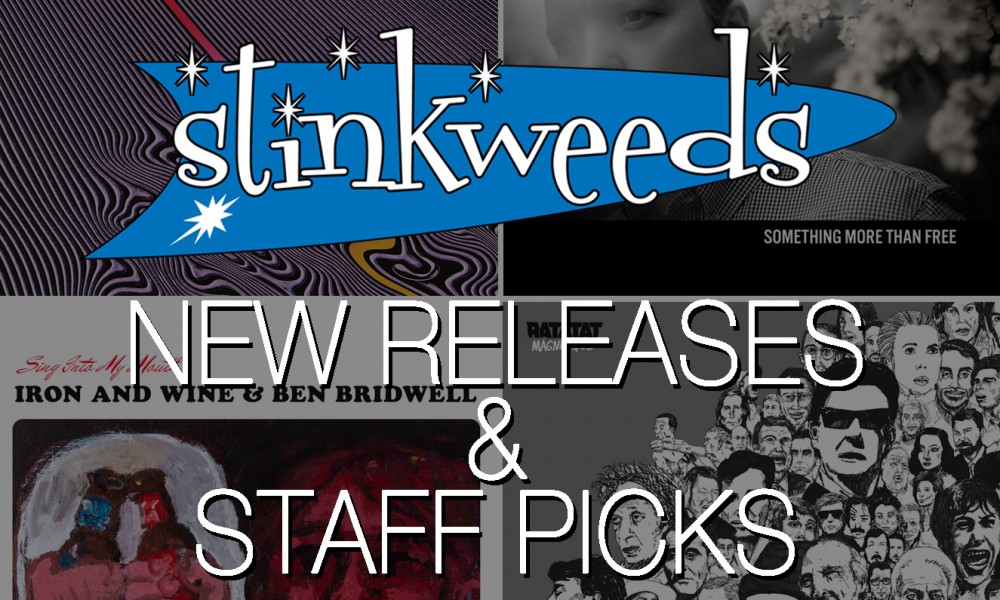 The Bird And The Bee – Recreational Love CD/LP (Rostrum)
The fourth album from the bird and the bee, Recreational Love, came to life over a half-decade of songwriting and recording. “We didn’t mean to take so long but life ended up getting in the way, in a great way,” says vocalist Inara George, who formed the Los Angeles-based duo with multi-instrumentalist Greg Kurstin in 2005. In the midst of pursuing other projects — George also sings in the indie-folk supergroup the Living Sisters, Kurstin’s a Grammy Award-nominated producer who’s recently worked with Sia, Lykke Li, and Charli XCX — the two met most Friday mornings at Kurstin’s studio to dream up their latest batch of finely textured retro-pop. With a hint of R&B adding some warm grooves this time around, Recreational Love captures the easy intimacy of their collaboration and lets listeners slip into the band’s own charmed and secret world.

Carlton Melton – Out To Sea CD/2xLP+CD (Agitated)
Out To Sea sees Carlton Melton expand the psychedelia and free outrock sound of their previous output to its furthest horizons. Huge rhythms, outta space riffage, sparkling synths, pastoral passages, searing shards of molten guitar, smothered ambience and gentle guitar-picking all flow together into waves of sound to lap at the shores of your senses.

The Chemical Brothers – Born In The Echoes CD/2xLP (Astralwerks)
“Collaborators return for Born In The Echoes, the pair’s eighth album and first since Further. But here the Brothers largely bend the singers to their will, their voices subservient to the power of the songs. St Vincent’s contribution to ‘Under Neon Lights’, for example, is chilling (‘And she moves to suicide / In and under neon lights’), her voice eventually cut to electronic shreds and fed stuttering back into the mix like a malfunctioning car alarm. They pull a similar trick with London singer Ali Love (who guested on ‘We Are The Night’ single ‘Do It Again’) on ‘EML Ritual’, his vocals pitch-shifted and layered to create the unsettling effect of too many late nights, echoing lyrics about losing your mind (“I don’t know what to do / I’m going to lose my mind”). These two tracks brilliantly marry Further’s brooding electronica with the unsettling feel of the darkest psych-rock. But the real highlights are those that sound least like anything the Chems have done previously, as they burrow further down the rabbit hole, emerging somewhere between early Pink Floyd, minimal techno oddball Ricardo Villalobos and experimental London electro group White Noise, who formed in 1968” – NME.

Galactic – Into The Deep CD/LP+MP3 (Provogue)
The New Orleans funk institution return with a new album, produced and arranged by Galactic’s Ben Ellman and Robert Mercurio. Into The Deep finds Galactic joined by a number of special guests including Macy Gray, Mavis Staples, JJ Grey, Ryan Montbleau, David Shaw of The Revivalists, Maggie Koerner, Brushy One String and Charm Taylor. “We look for uniqueness and a quality that makes the people we collaborate with distinctively who they are,” Mercurio said of their collaborations on the album.

Iron And Wine & Ben Bridwell – Sing Into My Mouth CD/LP (Black Cricket)
Longtime friends Ben Bridwell of Band Of Horses and Iron And Wine’s Sam Beam unveil their first-ever collaborative album, Sing Into My Mouth, an homage to 12 songs that have had indelible influence on both of its creators. Classics interpreted range from Talking Heads’ “This Must Be The Place (Naive Melody),” Sade’s “Bulletproof Soul,” and El Perro del Mar’s “God Knows (You Gotta Give To Get)” the original having recently been featured on HBO’s Girls to deep cuts like Them Two’s “Am I a Good Man?”

Jason Isbell – Something More Than Free CD/2xLP+MP3 (Southeastern/Thirty Tigers)
“When Jason Isbell released the album Southeastern in 2013, a promising and talented singer-songwriter turned into one of the most popular and acclaimed artists in Americana music. Isbell first gained recognition in the band Drive-By Truckers. While his contributions were excellent, his later solo releases were spotty. With Southeastern, a newly sober Isbell truly blossomed. Something More Than Free proves that Southeastern was no fluke. Isbell IS one of America’s great artists. Like its predecessor, Something More Than Free is stark and simple. There’s no fancy instrumentation. What there is so perfectly matched to the songs you have to make a point to notice it at all. The focus is on lyrics and melody.” – Knox News

Flo Morrissey – Tomorrow Will Be Beautiful CD/LP (Glassnote)
“If you’re after a quick way to feel ancient, just think about how 20-year-old Londoner Flo Morrissey discovered the likes of Joanna Newsom, CocoRosie, and Devendra Banhart in her dad’s car when she was nine or 10 years old. Recently reissued documentary The Family Jams chronicles the innocent days of freak folk, the painfully amateur footage mirroring a shambolic summer tour spent rejoicing in the hands. A decade on, a pristine redux of the collective’s influence manifests in Morrissey’s debut, aided by the production of scene original Noah Georgeson. Complementing Morrissey’s piercing melismatics are softly thumbed acoustic guitars, very familiar harp motifs, and cosmic accents, along with a plush string section and period wardrobe.  Although Morrissey reaches back a decade and way beyond, to the likes of Karen Dalton, Nick Drake, and Vashti Bunyan, Tomorrow Will Be Beautiful feels like an accurate representation of right now. She’s part of a raft of privileged British musicians who can afford to be earnest and wide-eyed about the world, but it’s something she does better than most of them.” – Pitchfork

MS MR – How Does It Feel CD/LP (Columbia)
Sophomore album by this New York-based duo consisting of vocalist Lizzy Plapinger and producer Max Hershenow. Plapinger is also known for her work as co-founder of the New York City/London-based Independent record label Neon Gold Records. Their music has been characterized as indie pop, alternative rock, dream pop, and dark wave.

Ratatat – Magnifique CD/LP (XL)
Following up on the experimental sounds of LP3 and LP4, Ratatat return to their core guitar-driven sound on Magnifique. “So much of Ratatat’s appeal lies in what it doesn’t do: On the band’s fifth album, Brooklynites Mike Stroud and Evan Mast built sleek, propulsive instrumentals using a spare palette of guitars, synthesizers and simple percussion in such a way that the music sounds both triumphant and understated. These are rock instrumentals that needn’t overcompensate for their lack of words; they don’t strain to be heard or scramble to stand out, but instead convey coolness that seems effortless.” — NPR

Tame Impala – Currents CD/2xLP (Interscope)
Currents is the third album by Australian epiphany pop auteur, Kevin Parker, known to many as Tame Impala. “Kevin Parker of Tame Impala has said that listening to the Bee Gees after taking mushrooms inspired him to change the sound of the music he was making. Parker also suggests that being put in a box as a psych musician was another factor in deciding to go against that grain. ‘I don’t like the idea that I’m a one-trick pony, even if I am!’ he says. ‘No matter what else I do, I have to make sure that ‘Elephant’ isn’t Tame Impala’s biggest song anywhere.” – NME

White Reaper – White Reaper Does It Again CD/LP+MP3 (Polyvinyl)
“For some people, what makes a song really great is how good it sounds when you’re driving a car. Meaning, is this something you’re gonna play when you’re driving around and you need to show your pals something really sick and everyone will dig? Or if you manage to steal the aux cord from whoever’s driving there better be a reason why they shouldn’t throw you out of the car. A good reason would definitely be White Reaper. White Reaper is a band from Louisville, KY that play thrashy but shamelessly fun rock for you and your friends. Their new record, White Reaper Does It Again features the band playing 12 tracks of distorted rock to drive for miles to. On ‘Sheila,’ their singer Tony Esposito jams and chugs through the song’s verse, before a synth line surfs in for the chorus, something you really want to cruise with. It’s a track that’s well-written and perfect for driving your car to the beach, the moon, or wherever possible.” – Noisey

The Cocteau Twins – Tiny Dynamine/Echoes In A Shallow Bay [Reissue/1985] LP+MP3 (4AD)
The Cocteau Twins – The Pink Opaque [Reissue/1986] LP+MP3 (4AD)
With a history of releasing singles between albums, the two EPs of Tiny Dynamine and Echoes In A Shallow Bay were originally released two weeks apart back in November 1985. Seen as companion pieces, they both acted as a precursor to their fourth studio album, Victorialand. 30 years later, they’re now being married together on to one piece of vinyl, completed with reformatted artwork. A year later, in 1986, The Pink Opaque brought together the best of the Cocteau Twins’ early works to become their first official release in the US. Already a cult band on college radio, some classics like “Pearly-Dewdrops’ Drops” and “Aikea-Guinea” were given new mixes for this release, while it also featured “Millimillenary,” the first run out for incoming band member Simon Raymonde.


Zero 7 – Simple Things [Reissue/2001] 2xLP (Atlantic)
HQ-180gm vinyl reissue of the debut album by the British electronica duo. Simple Things features vocals by Sia Furler (on tracks “Destiny” and “Distractions”), Mozez (on “I Have Seen,” “Simple Things” and “This World”) and Sophie Barker (on “Destiny,” “In the Waiting Line” and “Spinning”). The album peaked at #28 on the UK Charts Top 75, staying in the charts for 43 weeks.