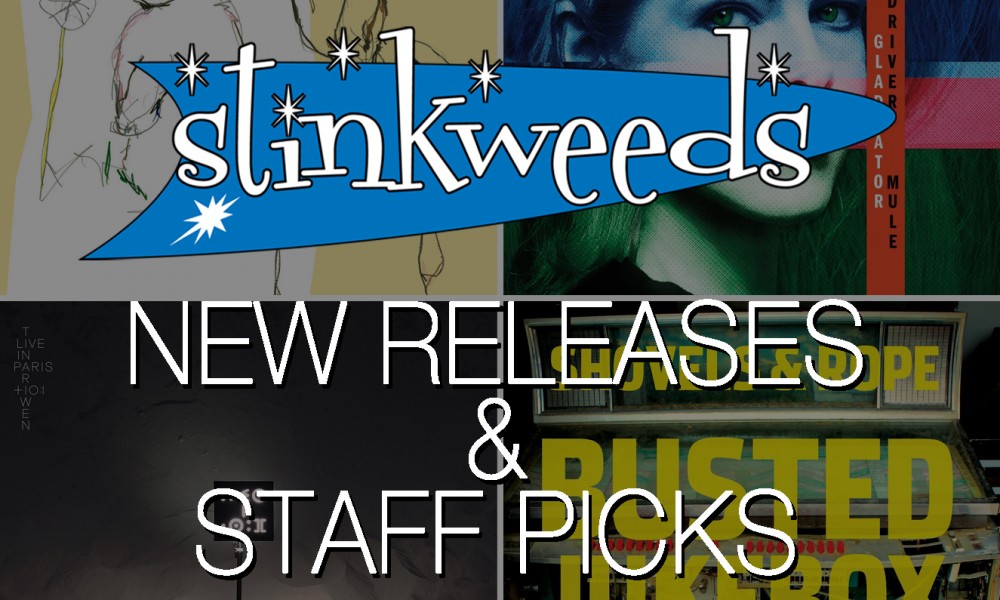 kimber – tinariwen
lindsay – neko case, beat happening
dario – shye ben tzur, jonny greenwood and the rajasthan express
jeff – six organs of admittance
THIS WEEK’S NEW RELEASES
Adele – 25 CD/LP (XL/Columbia)
“‘Hello’ doesn’t just introduce 25; in many ways, it sums up the album. On 25, the rage and heartache of 21 are replaced by longing: for connection, for youth, for reconciliation and for lifelong bonds. Like other songs on the album, ‘Hello’ is filled with thoughts of distance and the irrevocable passage of time, of apologies and coming to terms with the past. Musically, ‘Hello’ has verses with just voice and piano followed by huge, ringing choruses; similarly, the album as a whole switches between organic, unplugged ballads and booming modern pop.” – The New York Times Music

Arca – Mutant CD (Mute)
New album from Kanye West and Björk affiliate Arca. Spanning 20 tracks, “Mutant is about sensuality and impulsiveness as escape routes out of rigidity,” the Venezuelan producer explained in a press release. “Softness as a weapon when the mind attacks itself.” Vinyl due January 22.

Beat Happening – Look Around CD/2xLP+MP3 (Domino)
Formed in the early ‘80s in Olympia, Washington by Calvin Johnson, Heather Lewis and Bret Lunsford, Beat Happening combined a primitive pop sound with a D.I.Y. attitude and inspired countless artists along the way. The community that arose around the band and their label, K Records, was in many ways, the sonic antithesis of their Seattle neighbors (and friends) but was no less influential. Look Around is a remastered, double album anthology, handpicked by the band. It’s a great starting point for the uninitiated as well a refreshing reminder to those who caught the wave the first time around.

Neko Case – Truckdriver Gladiator Mule 8xLPbox (Anti)
Limited 180 gram vinyl 8LP box set. Now more than 20 years into that calling, Neko Case is the consummate career artist -fearless and versatile, with a fierce work ethic and a constant drive to search deeper within herself for creative growth. Nowhere is that clearer than in Truckdriver, Gladiator, Mule, a stunning vinyl box set of Case’s complete (so far) solo discography. All eight titles–The Virginian (1997), Furnace Room Lullaby (2000), Canadian Amp (2001), Blacklisted (2002), The Tigers Have Spoken (2004), Fox Confessor Brings the Flood (2006), Middle Cyclone (2009), and The Worse Things Get, the Harder I Fight, the Harder I Fight, the More I Love You (2013)– are remastered from their original analog tapes and made available on 180g black vinyl, some for the first time in years, or ever. The set also includes an 80-page, limited-edition, full-color book of photography, designed and curated by Case herself. “The release of this set gives listeners an excuse to appreciate the scope of one of the most individual and passionate artists making music today,” says Anti- label head Andy Kaulkin. “When you take it all in, Neko’s journey from punk/country torchbearer to avant pop icon has been staggering. This box makes a strong case for her fierceness of vision, pristine musical craft, unflinching lyrics, and of course…That voice!”

Julia Kent – Asperities CD (Leaf)
Vancouver-born and New York-based, acclaimed cellist Julia Kent rose to prominence with Rasputina and Antony & The Johnsons. Her extensive résumé includes recent work with Swans, Aidan Baker, Rachel Grimes, Rutger Zuydervelt, Barbara Morgenstern, Library Tapes and Khan of Finland. Asperities is the artist’s fourth solo album. As the title suggests, this is a record born of conflict: internal, personal and global. Universal themes. The build of pressure and the threat of violent release. Modern guilt. Modern fears. Looped cello, electronics and found sounds create a world where the technological and the organic merge in perfect symbiosis, the layers of sound peeling back to reveal a beating, bloody human heart at its center. Vinyl version due December 18.

M83 – Digital Shades Vol. 1 [Reissue/2007] CD/LP (Mute)
M83 – Saturdays = Youth [Reissue/2008] CD/LP (Mute)
Digital Shades Vol. 1 is the fourth studio album by M83. The mostly instrumental album was originally released on Mute in 2007, and features only founding member Anthony Gonzalez.
Old fans will note a substantial difference between Saturdays = Youth and M83’s previous releases; the album is more shoegazey in texture and more pop in construction. While the galactic, deep space vibe is still there, the overall aesthetic is more Cocteau Twins a la My Bloody Valentine rather than another addition to the towering electronic post-rock tradition that Mogwai and Sigur Rós perfected. The record draws heavily from the likes of Tears For Fears and Cocteau Twins, as well as classic John Hughes teen movies.

Shovels & Rope – Busted Jukebox: Volume 1 CD (New West)
Shovels & Rope’s Busted Jukebox: Volume 1 is a collaborative effort between the duo and their close friends. The ten song collection finds the band covering well known songs or tracks they have written or performed with other artists in the past. Collaborators include Shakey Graves, Lucius, J Roddy Walston, Butch Walker and more.

Shye Ben Tzur, Jonny Greenwood and the Rajasthan Express – Junun CD/2xLP (Nonesuch)
Junun is an album from composer/musician Shye Ben Tzur, guitarist Jonny Greenwood, and the Rajasthan Express, a group of Indian qawwali musicians. Recorded earlier this year in a makeshift studio inside the 15th-century Mehrangarh Fort in Jodhpur, India, the album was made with Radiohead’s producer Nigel Godrich, who worked with the ensemble to create this two LP/CD album. The album features Ben Tzur’s compositions, which combine ecstatic, devotional Sufi qawwal musical traditions and his native Hebrew.

Tinariwen – Live In Paris CD (ANTI-)
Traveling to exotic lands is nothing new for Tinariwen. The Saharan blues band have performed the world over bringing their signature mix of hypnotic rock guitar with the traditional instruments and vocal stylings of their native Tuareg roots to their adoring fans. But this night in Paris would be different, and this live recording captures the magic. Vinyl edition due December 18.

John Zorn – Cerberus: The Book Of Angels Volume 26 CD (Tzadik)
This is the Big Band Masada project you’ve been waiting for. Led by composers Sam Eastmond and Nikki Franklin, The SPIKE Orchestra is a large ensemble that draws on a wide range of influences including Duke Ellington, Frank Zappa, Carl Stalling, Zorn and more. Melding jazz, rock, klezmer, cartoon and the avant-garde into a compelling and cohesive vision, this new Angels installment is one of the most imaginative and manic masterpieces in the whole series. An outrageous and explosive swinger that will thrill even the most hardened skeptic.

The Besnard Lakes – The Golden Lion 12”+MP3 (Jagjaguwar)
Three brand new tracks as a precursor to a new album due in 2016. “On ‘Golden Lion,’ Besnard Lakes focus their lush energy on a sunnier, catchier sound. Jace Lasek’s clean falsetto is more alive when paired with high-flying guitars, and alongside the band’s blanketed, nonlinear arrangements, he sounds like he’s studied the Bee Gees and Brian Wilson. But there is an ease here that Besnard Lakes haven’t experimented with. ‘You are a golden lion,’ Lasek sings, and the sweet melody is so strong that the abstract lyrics become a compliment. It’s unclear if this is a love song. As a symbol, the golden lion recalls the Tarot card of Strength, but the song’s adherence to a classic melody dissolves any doubts. If ‘Golden Lion’ isn’t about loving another person, it’s about loving the purest elements of pop.” – Pitchfork

Butthole Surfers – Electriclarryland [Reissue/1996] 2xLP (Plain)
Originally released in 1996, Electriclarryland features the Surfers only top 40 hit with the song “Pepper”. Although the sound on this album continues the more streamlined approach they started with Independent Worm Saloon, this record is by no means mainstream, even with the hit. With pile driving rockers, pop-punk raves, acid freakouts and their demented sense of humor and bizarre perspective intact, the Surfers take no prisoners. Three sides of music with the fourth side featuring etchings by Gibby Haynes.

Dr. Dre – Compton (A Soundtrack By Dr. Dre) 2xLP (Aftermath)
Now available on vinyl. “Musically, the album is a reminder that Dre’s palette and appetite for sound has always been eclectic, and rather than retread, we hear him pushing into new territory. At one moment, he’s sampling an obscure modern funk band from Italy (for ‘One Shot One Kill’) and the next, lifting a guitar riff from a random Turkish psychedelic burner. Throughout, session musicians polish out the edges, and Dre continues to lean on live keys and bass to fill out chunky bottom ends.” [BNM/8.8] – Pitchfork

Six Organs Of Admittance – Hexadic II LP/Cassette (Drag City)
Hexadic II simultaneously explores the same charts and paths that gave birth to its predecessor, while creating music of a totally different order. The Hexadic II songs have direct correlates to the Hexadic songs, yet are much more than mere acoustic versions. Think of them as distant cousins to the songs on Hexadic, obsessed with Greek choir, the desert, and the sea.

Kelley Stoltz – In Triangle Time LP (Castle Face)
Recently released on CD – now available on vinyl. Silver-tongued songsmith and true American treasure Kelley Stoltz presents a 2015 collection of instant classics with just a hint more synthery than 2013’s Double Exposure. For those not yet in the fan club, Kelley is like a Ray Davies/Brian Wilson/Tom Petty power pop Cerebus from another dimension where well placed tambourines, handclaps, and wry observations are a universal language. Criminally under-appreciated, Kelley’s face should be on Amoeba-bucks for his contributions to the pop canon-the black-lipstick-smeared stand-out and lead-off track “Cut Me Baby” could be his walk-on music for the acceptance speech.

The Wainwright Sisters – Songs In The Dark 2xLP (PIAS)
Released last week on CD – now available on vinyl. After collaborating with members of Cibo Matto and the Dirty Three for 2012’s Come Home To Mama, folk artist Martha Wainwright is taking a more familial approach to her next LP. Specifically, she’s teamed up with sister Lucy Wainwright Roche to release an album called Songs In The Dark as, fittingly enough, the Wainwright Sisters. In addition to their own musical family tree, the folk-flecked album also includes the Wainwright Sisters’ “dark, mysterious, and beautiful” take on number made famous by Woody Guthrie and Jimmie Rogers.
NEXT WEEK’S NEW RELEASES
In addition to over 120 separate, limited edition titles coming out for Black Friday, these will also be available!
BJORK – Vulnicura Strings CD
LOVE – Reel To Real CD/LP
MOGWAI – Central Belters (best of) CD
MR LIF – Phantom CD/LP
THEY MIGHT BE GIANTS – Why CD
TY SEGALL – Ty Rex LP
WILLIAM ONYEABOR – LP reissues
SUNN O))) – Kannon LP
RUN THE JEWELS – Meow The Jewels LP