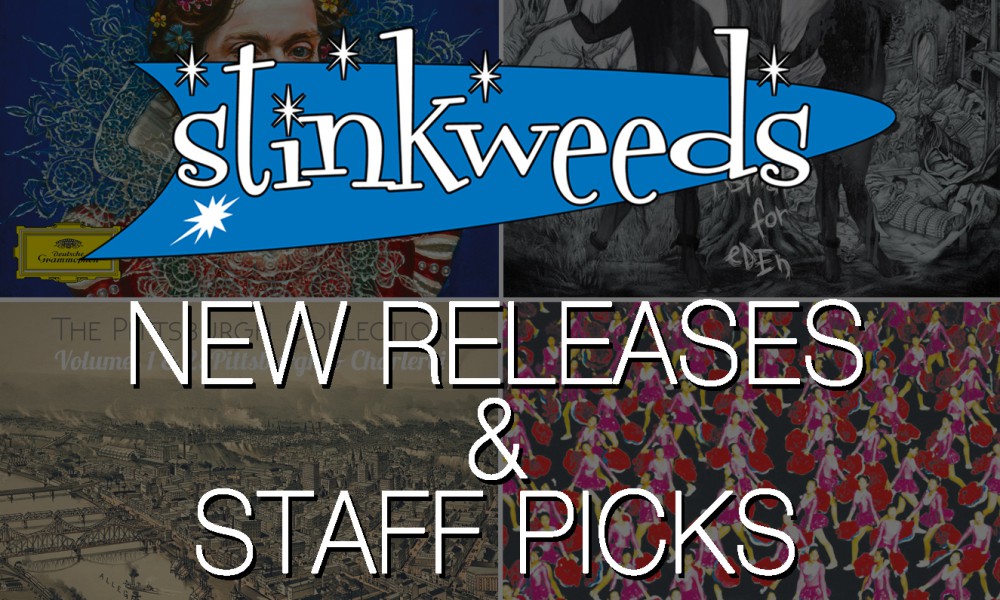 THIS WEEK’S NEW RELEASES
Dälek – Asphalt For Eden CD (Profound Lore)
The first new album since 2009’s Gutter Tactics marks the return of the cult hip-hop/noise originators after a long hiatus.Vinyl edition due May 6.

Nicolas Godin – Centrepoint CD/LP+CD (Because Music)
Solo album from the French musician best known as one-half of Air. Godin was inspired by the work of pianist Glenn Gould’s performances of Bach when making the album. Each track uses a different Bach piece as a jumping-off point. Godin says, “We (Air) weren’t surprising ourselves anymore, like other bands after ten years or more. The big challenge for an artist is to have a reason to be, because there are already plenty of records out there. I’d made a statement with Air and I wanted to go back to the classical world, to grow up musically, to renew myself.”

Greys – Outer Heaven CD/LP+MP3 (Carpark)
Outer Heaven is a massive leap forward for Toronto post-punks Greys. Delivering on the promises made on 2015’s Repulsion EP, the band tempers their trademark onslaught of discordance with new textures and subtle dynamics, building a more spacious and melody-driven environment atop their noise rock foundation. “Outer Heaven’s heightened ambitions are best measured in terms of density rather than sprawl: the most bracing songs here pack in more radiant guitar textures, a greater lyrical depth, and sharper hooks without sacrificing Greys’ innate moshability and punk-schooled economy. Ironically, the more self-consciously outré material feels staid by comparison: the sudden grindcore shocks of ‘Strange World’ can’t quite force the song to shake off its dirge-y gait, and though the drum machine-ticked ‘My Life As A Cloud’ taps into the spectral beauty of Halcyon Digest-era Deerhunter, its trickling guitar outro closes this highly charged album on an oddly resigned note. But even if Greys are still learning how to stretch out with purpose, Outer Heaven serves as a most welcome reminder of indie rock’s iconoclastic potential, from a band committed to the belief that it could be your life” – Pitchfork. [Limited copies also pressed on white color vinyl.]

Captain Beefheart & His Magic Band – Lick My Decals Off, Baby [Reissue/1970] LP (Rhino)
Captain Beefheart – The Spotlight Kid [Reissue/1972] LP (Rhino)
Captain Beefheart & His Magic Band – Clear Spot [Reissue/1972] LP (Rhino)
Limited edition vinyl reissues of Captain Beefheart’s fourth, sixth, and seventh albums. Lick My Decals Off, Baby was originally released on Frank Zappa’s Straight Records label. The follow-up to Trout Mask Replica (1969), it is regarded by some critics and listeners as superior, and was Van Vliet’s personal favorite.The Spotlight Kid is the only album formally credited solely to Captain Beefheart. Often cited as one of the most accessible of Beefheart’s albums, it is solidly founded in the blues but also uses instruments such as marimba and jingle bells that are not typical of that genre. With Clear Spot, Captain Beefheart was after a more commercial sound, hence his enlisting ofproducer Ted Templeman and engineer Donn Landee, who also created hits for artists such as the Doobie Brothers, Carly Simon and Van Morrison.