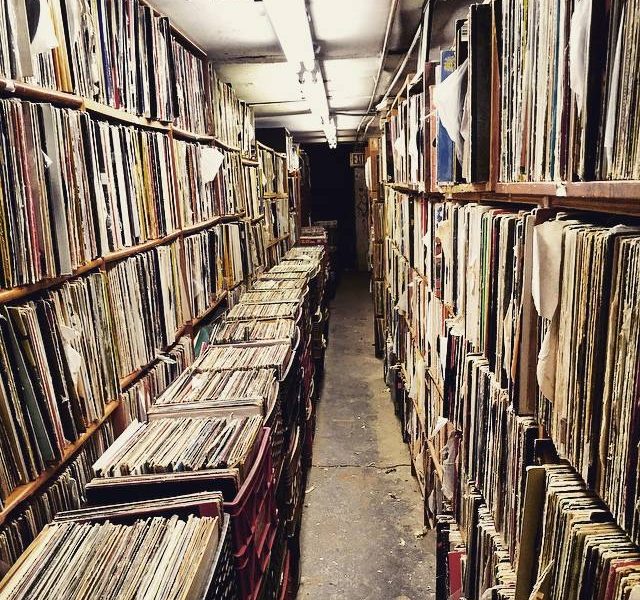 Alphabetized Into Obscurity: A Journey Into the Unknown Vol. 6

Are we in danger of losing our sense of exploration? Will the convenience of information at our fingertips dull our courage to reach into the unknown. That same courage that it takes to walk into a restaurant without consulting Yelp might walk a fine line with our courage to peer into dark corners, where unknown treasures or horrors may lurk. I am certainly guilty of this. It is rare that I will buy an album without giving it a listen first. I don’t think there is anything wrong with this. I consider it to be a smart way to shop. However, this could be hindering my willingness to pay a couple bucks for anything unanchored by previous knowledge or reference.

This is why we take the time to explore the unknown, in this, our 6th installment of the Alphabetized Into Obscurity, where we use only our eyes, our ears and our sense of curiosity to discover the lost and forgotten records that somehow find their way into our store. There is a vast world of music and it is all too easy to find the really good stuff. But, we shouldn’t forget; there’s also some really really good bad stuff. 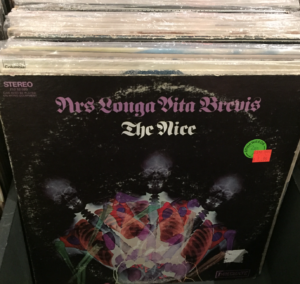 Now, this is why we do this! The Nice was an earlier project of the great and recently departed keyboardist, Keith Emerson. Admittedly, I’m not the biggest fan of progressive rock, but I can’t deny the importance and influence of Mr. Emerson. Also, this album is fucking awesome! Released in 1968, it captures more of the raw psychedelic tone of it’s era. There are still plenty of Prog-y twists and turns, but there is a significant bite to this album. The vocals are weird and often out of place; the riffs are more rooted in rhythm and blues and the reverb and distortion is cranked up for full blown headiness. I can’t help but think that this album is a real gem that has gone unnoticed. And, here’s the kicker, this was in our sale bin, priced at $1.99! 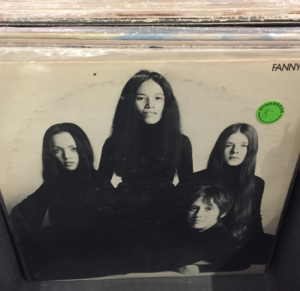 It seems every time I revisit this series, I find some very significant album or band. There is a real historical and social significance to the band, Fanny. They were only the third all female band to sign to a major label and the first to release a full length album. Perhaps it’s sad to think that it took until the early 70s for an all female band to release a full length on a major label, but surely this wasn’t for a lack of groups or talent. It’s no secret that the music industry has always been a real “boys club.” But, I’ll spare you the ranting about this fact, in written form. Just ask any of us how we feel about this at the shop and we’ll gladly go off on this subject. I’d rather focus on the merits of this album without the context of it being a “girl band.” This has all the trappings of a great early 70s album, with it’s nods to early R&B, soulful, powerhouse vocals and plenty of chops, grinding out heavy solos and driving rhythms. It’s hard to pin down an exact categorization or influence. There’s a little southern rock, there’s plenty of Fleetwood Mac pop elements and often times, some heavier moments that are reminiscent of MC5 and a few guitar solos that foreshadow upcoming trends in heavy metal. Perhaps this mastery of so many different styles was the hindering factor in any future success for the band. After their breakup in 1975, some of the members went on to start other groups and founding member June Millington went on to produce albums from such influential female acts as Cris Williamson (Featured in the first Alphabetized Into Obscurity) and 90s queercore band Bitch and Animal. She now runs the Institute for Musical Arts, a non-profit organization supporting girls and women in music. So yeah, ad that to your list of organizations to support and while you’re at it, give Fanny a listen! 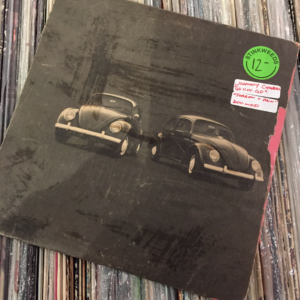 This is as much a found, folk art discovery as it is a really fun listen. For about as long as I can remember working at this shop, this little 45 has popped up, now and again, with little thought given to it’s cryptic, homemade cover, a black and white photo of two V.W. bugs and an even more mysterious back cover with a photo of a well groomed young man, seemingly taken in the early 60s along with words written roughly in pen, “Best Wishes, Johnny Cymball (with two LLs, not 1. Also, I looked up pictures of Johnny Cymbal…I’m pretty sure that’s not him).
Now, this might have gone unnoticed, since our 45 bin is rife with oddball cover art and cryptic writing. But, something so strangely intriguing and at the same time, unassuming, could only cross my path a number of times before I’m going to wonder what the heck it is. Given it’s D.I.Y. cover, I was expecting some esoteric noise or lo-fi folk. What I got was perhaps the most commercially appealing piece of music we’ve probably ever carried in this store. If you don’t already know, Johnny Cymbal was a Rock N’ Roll hit machine in the early to mid 60s, having published over 200 songs and topping the charts with his smash hit Mr. Bass Man (Later made popular by the Muppets band, Dr. Teeth and the Electric Mayhem, featuring Scooter on Vocals). What we have with Go V.W. Go is that same kind of shallow lyricism that leaves nothing to interpretation or even deeper thinking. Pretty much take any song from that era about any kind of car and apply it to a Volkswagen. There’s racing, bragging, references to car parts and, of course, ogling girls. The musical elements are just as predictable and formulaic as the content. So, what does that leave us with?…just a good, wholesome, fun song about America’s love for the automobile…even it it’s made by the Germans. 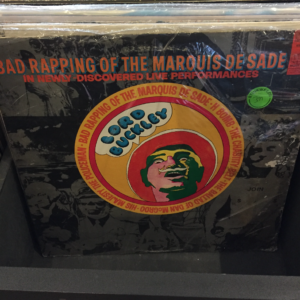 Lord Buckley – The Bad Rapping of the Marquis De Sade [1986]

Now, I’ve been familiar with Lord Buckley since I was a high school aged teenager. As some teenagers are inclined to do, I had quite a love for the “beat” culture of the 40s and 50s. Lord Buckley was a very odd and therefore appropriate fixture of the hipster scene. At first glance, one might think he was some sort of anachronistic character of colonial English origin. But, when he would open his mouth to speak, it would rapidly go from British aristocrat, addressing the audience as “My lords and my ladies of the royal court” to a rapid paced sort of word jazz, with all the affectations and hipster expressions of this time, carried along with a syncopated swing one might expect from a Max Roach drum solo. To add to this strange juxtaposition of proper gentleman meets college dropout, refer addict, the subject of his monologues was often references to historical figures or events. Sometimes he would rework entire historical speeches as if to translate them to some strange culture that only exists in a 1940s Jazz club. His speeches are great tributes to this era. He died at the young age of 54 in 1960, never able to witness the trajectory of this language he had such a palatable knowledge of. He may not have been the one to invent this language, but his interpretation of it gave it such exuberance and style, that his influence can be traced to similarly charismatic performers, alive today. Tom Waits comes to mind. 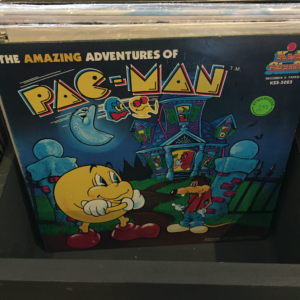 The Amazing Adventures of Pac-Man [1982]

Let’s unpack this. We’re all familiar with the intellectual property of Pac-Man. Asked to describe exactly what it is, one might say it was a video game, popular in the 80s that involves a yellow orb-like character, with a mouth, who’s only objectives are to travel through a maze, eating as many little dots as possible, balanced out with some fruit and occasionally eating ghosts that are persistently haunting and trying to kill you. In the early days of video games, you didn’t really need more than that to keep you loading in the quarters. However, our capitalist society has never been one to leave well enough alone. So, the great minds at “Kid Stuff Inc.” decided to expand on this universe and put a little back story behind this character. I’ll make this brief. Basically, Pac-Man is a resident of Pacville, where the “major industry of pacville is the picking, packing and purchasing of fruit.” A malicious gang of ghosts decide to steal all the fruit in pacville and hide them in their haunted house. Of course, it is up to our hero to retrieve all of the fruit.

Artistically, you could describe this album as “phoned-in.” However, if you’re a sucker for 80s, 8bit music, cheesy synth sounds and just awful awful songs performed by overly enthusiastic adults doing ridiculous voices, then this is the album for you. Or, maybe you’re just a big fan of the 80s and need something to hang on your wall. Going into this one, I sort of knew I wasn’t unlocking any great piece of art, ironic or otherwise. But, having played a lot of Pac-Man in my younger years, It gave me pause to think that I have never once considered the back story of Pac-Man. But, I find a strange comfort to know that someone took the time to, not only, have that thought, but to let it incubate and hatch. This isn’t the first album in this series that elicits this strange admiration for the underappreciated creative mind. While we are often surrounded by albums created by confident, well liked individuals with cool ideas and cool outfits to match, it can serve to keep a grounded sense of our taste to occasionally explore the lesser appreciated artists; the ones who find their muse in a faceless orb, trapped in a maze, haunted by ghosts. Perhaps you find it hard to relate to that narrative. But, look a little deeper. Maybe you can.