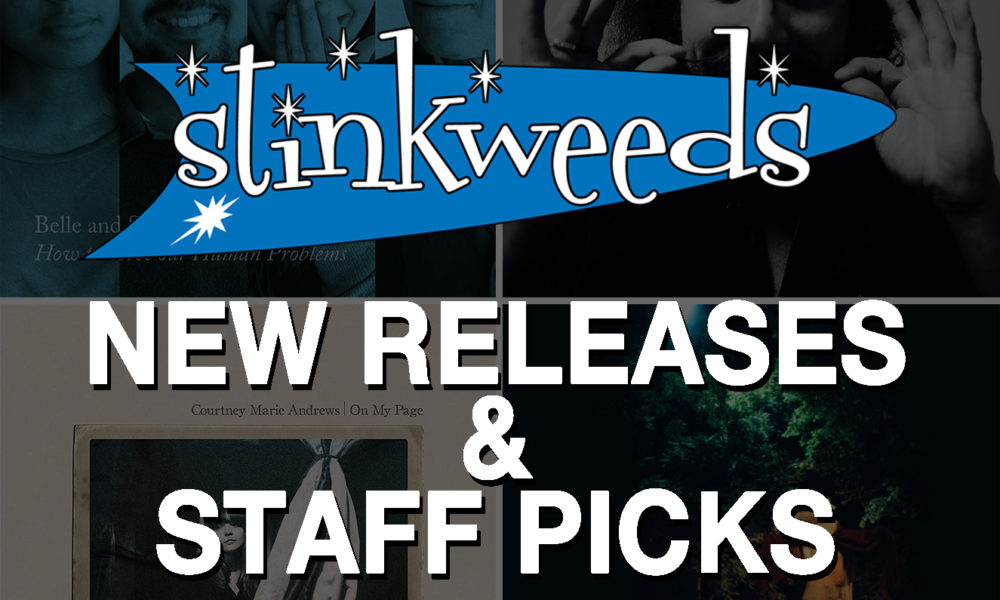 Courtney Marie Andrews – On My Page [Reissue/2013] CD/LP (House Arrest)
Courtney Marie Andrews’ predecessor to the highly successful Honest Life (2016) is back in-print on CD and available on vinyl for the first time. For a decade or so Courtney was a session and backup singer and guitarist for nearly 40 artists – from Jimmy Eat World to Damien Jurado – but she never stopped writing her own material. Picking up admirers like Ryan Adams (who called her “a phenomenal songwriter”) along the way, she quietly earned a reputation as a songwriter’s songwriter.

Jim James – Tribute To 2 CD/LP+MP3 (ATO)
After releasing the politically charged solo album Eternally Even in 2016, My Morning Jacket frontman Jim James returns with Tribute To 2, a collection of cover songs that reverberate with fresh meaning. Blurring the boundaries of time and genre, James interprets songs made famous by a wide variety of artists – ranging from early 20th century standards by Ray Noble and Al Bowlly (“Midnight, The Stars And You,” “Love Is The Sweetest Thing”) and 1960’s songs by Willie Nelson and Sonny & Cher to Emerson, Lake & Palmer’s 1970 breakthrough hit “Lucky Man” and 1990s releases by Abbey Lincoln and Diane Izzo. Also included are covers of songs by The Beach Boys, Elvis Presley, Bob Dylan, Abey Lincoln and Irving Berlin. [Limited gold colored vinyl pressing also available.]

Kendrick Lamar – Damn [Collector’s Edition] CD (Aftermath)
Includes new cover art and a revised (reversed) track list. “I think like a week after the album came out, [fans] realized you can play the album backwards…It plays as a full story and even a better rhythm… It’s something that we definitely premeditate while we’re in the studio,” Kendrick said to MTV. “I don’t think the story necessarily changes, I think the feel changes…The initial vibe listening from the top all the way to the bottom is…this aggression and this attitude. You know, ‘DNA,’ and exposing who I really am. You listen from the back end, and it’s almost the duality and the contrast of the intricate Kendrick Lamar. Both of these pieces are who I am.”

Shovels & Rope – Busted Jukebox: Volume 2 CD (New West)
The second installment of the collaborative effort between the critically acclaimed duo and some of their favorite musicians and friends. Busted Jukebox: Volume 2 again finds the band covering well-known songs or tracks they have either performed or arranged with other artists in the past. Features collaborations with Brandi Carlile, John Moreland, Hayes Carll, Nicole Atkins, Rhett Miller and more. [180gm vinyl edition due February 9.]

Swingin’ Utters – Drowning In The Sea, Rising With The Sun CD/2xLP (Fat Wreck Chords)
This 33-song anthology serves as a testament to the Utters’ peerless punk rock attack.

Chris Thile – Thanks For Listening CD (Nonesuch)
New studio recordings of ten songs originally written as Songs Of The Week on A Prairie Home Companion. Thile manned almost all of the stringed instruments on Thanks For Listening and is joined by guest singers Sarah Jarosz, Gaby Moreno, and Aoife O’Donovan. “Right now, with how easy it is to be the talker on social media, how hard it is to maintain focus or give something enough attention to appreciate it, we’re in a place where listening is a precious commodity,” says Thile. “Thanks For Listening is a celebration of people who haven’t switched off, despite being given every reason to do so.” [Vinyl edition due December 15.]

Belle and Sebastian – How To Solve Our Human Problems (Part 1) 12”+MP3 (Matador)
The first installment of three new EPs. The How To Solve Our Human Problems EP project is the latest installment in a career that has always pursued a singular and delightful vision of what pop represents and what it can achieve, a career that has seen them triumph against the odds to win a Brit award, be one of the first bands to curate their own festival, and play at the London residence of the US ambassador. Belle and Sebastian’s new music has the timeless blend of joy and melancholy that has always characterized them.