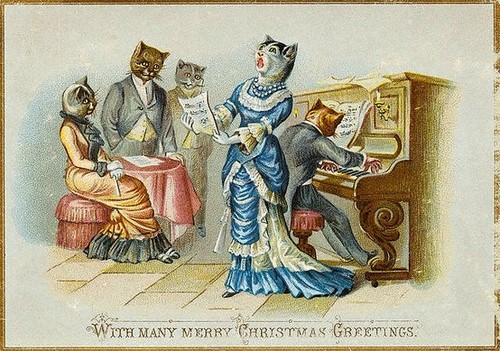 Merry Kitschmas! How the Holidays Inspire the Best of the Worst In Music

While walking around a very popular seasonal display of lights in the Phoenix area, I realized a few things about holiday music. There is A LOT of it and there really seems to be no set of standards as to what is good or bad. It just sort of is and we all accept that it is and always will be. This particular holiday light show is meticulously prepared with care and seemingly a huge budget. But, the soundtrack seemed like an “anything goes” kind of situation, going from classic Bing Crosby Christmas tunes, to Mannheim Steamroller Christmas “Metal” to the ever dreaded Paul McCartney “Wonderful Christmas Time.” Surely some time and attention could have been paid to this playlist, to ensure a magical event full of wistful memories and anticipation for family and Holiday cheer. Instead, it seems someone typed “Christmas” into spotify and let it run wild. This got me thinking about how Holiday music is made. For most musicians (at least any with a successful, lasting career) songs and albums are a process that can take many months, even years to complete. From the inception of a song to a fully realized “track” the process of trial and error, cutting and editing is not something to be taken lightly. So, what of Holiday music?

The Holiday season is a very “short order” season. Aside from the gifts we give and receive and the memories we make with others, everything has a sort of disposable nature to it. If not disposable, it is plastic and lacquered and made to be stored away for 11 months out of the year, only to be quickly dusted off and hung for a few weeks. I have found this to be the case with the music, as well. Much of it is rooted in nostalgia and autonomy that comes with songs registered in the public domain. But, the execution is often hurried and plastered on. No smart producer is going to spend more than a few weeks on something that will only sell for one month out of the year. “Get a house band in here, have some big name singer phone in these old songs, slap a bow on it and call it a day!”  There-in lies the true magic of holiday music.

Let’s explore some of the older, kitschy examples of this. 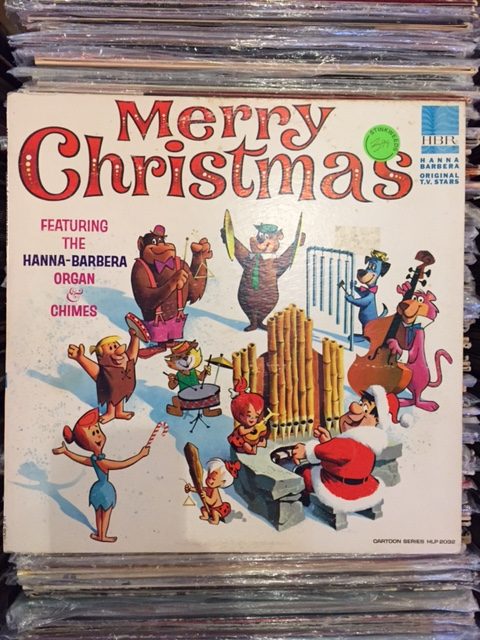 Obviously, expectations are never too high when purchasing a Holiday album. But, looking at this album cover, there are, no doubt, going to be some expectations. For instance, one might think that all the lovable characters on the cover might be represented throughout the recording. We’ve all owned albums based on our favorite cartoons and comic books, where we hear our loveable friend’s and hero’s voices reenact the most famous tropes and gags that we’ve come to know and love. Well, this is Christmas and there’s no time for that sort of thing! Our dear producer had very simple guidelines for this one. “Get me an organ player and some bells, play some Christmas songs, slap a picture with all the characters on it and say they’re the ones playing the music! Boom! Done! No need to pay the actors on this one.” 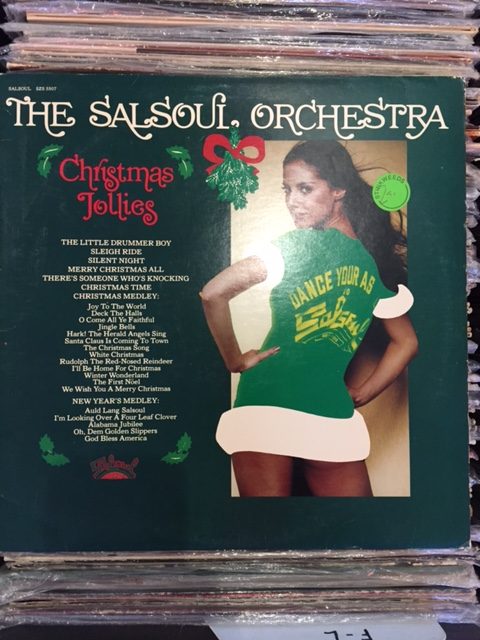 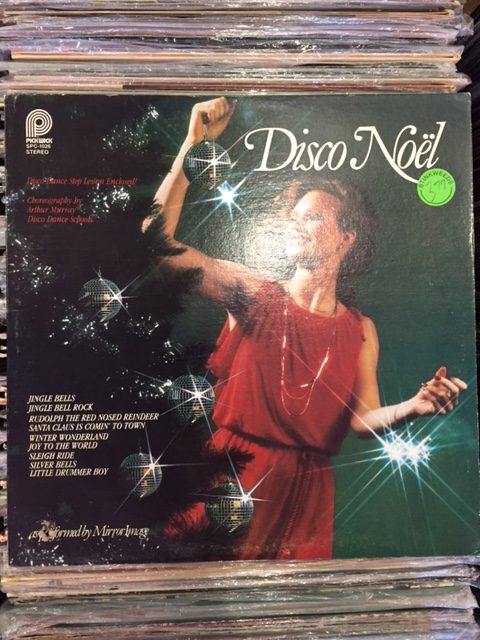 Now, I’ve reviewed holiday albums on this blog before and one of those albums was a Christmas Disco album. And, of course, it was just horrible. What I didn’t realize is how popular this kind of album was. It could be it’s own genre of music, there’s so many of them! Here we have two such albums. From first glance, you can see just how much work goes into these. Both covers feature a model and CLEARLY superimposed Christmas ornamentation. They couldn’t even be bothered to do a photo shoot! Just as the arranger couldn’t be bothered to take any artistic liberties with these songs. It’s not hard to sing a Christmas song and put the emphasis on the up beat, instead of the down beat. And, it’s not hard to find a drummer who can play sixteenth notes on a high hat and quarter notes on a kick drum. And, that’s pretty much all you get, with this one. But, like those of the Dadaist movement or the simplistic pop art of Andy Warhol, it’s one thing to say that you could do something and it’s another to actually do it. 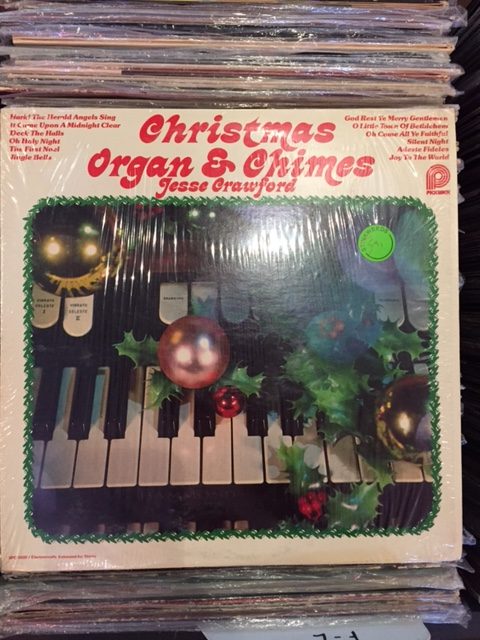 “Hey! Bring that Organist back in! We’re going to cut a quick one for the adults! …No. Same songs! Just no cartoon characters on the cover!” Yeah, trust me!” 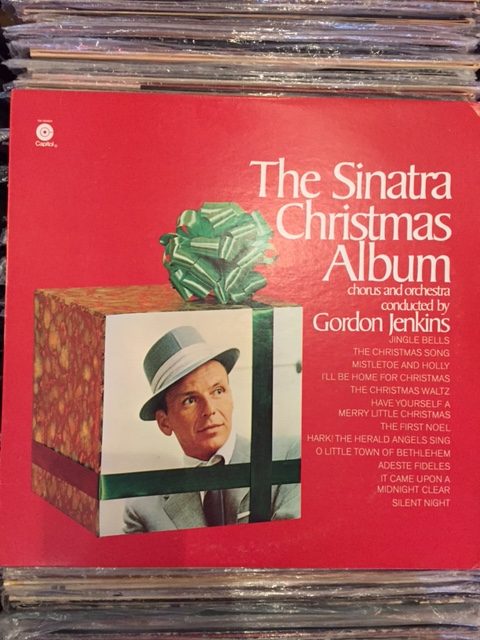 Now, here’s where I might get a little grief from some readers. I’ll admit to being a bit of a grinch when it comes to the vocal stylings of Sinatra. I’m more partial to the subtle, nuanced voices of a Mel Torme or a Tony Bennet. But, I will not discount that Sinatra is clearly a talented singer and performer. I just happen to think he leans on the performance, more than the singing. With the exception of this album. As we discussed in the prologue, public domain is the name of the game. For those unfamiliar, “public domain” refers to artistic properties that belong to the public and not the artist. There’s a lot of legalese about how something becomes public domain, but the long and short of it is old songs and dead composers equals you don’t have to pay to record the songs. But, you do have to pay for Sinatra! And, like anything, time is money. So, what has our crafty producer done here? Almost as if Sinatra was charging “per word” the producer gives us extended intros and for pretty much every song, an entire verse and/or chorus is sung by a choir, instead of the star of the show. And, as for old blue eye’s performance? Well, he’s a professional and professionals only need to do one take…with a contractually obligated 20 minute bourbon break, in between.

Friends, it is not my intention to bash the holidays or discourage you from enjoying these single serving musical treats. This is, of course, all in good fun. In fact, that’s what gives these albums their value. The holiday season is a time to put aside our pretensions and tastes and try to relate to the world, as a whole. Let’s eat some terrible fruit based foods! Let’s sit around and watch TV we don’t care about! Let’s spend more time talking about the weather outside than we’re actually spending in that weather! This is all in the spirit of togetherness. The rest of the year is your time to be you; weird and colorful as you are. And, your local record store will be right there waiting for you, with thoughtful, esoteric, polarizing art that draws that wedge between you and your loved ones, but also serves to lower expectations of perfect gift giving “we’re just happy you could make it, dear!”
But, if you find yourself needing to connect your love of music and your family’s love of the holidays, perhaps holiday music is the answer. Maybe you’ll find a common ground as you all cringe together under the lights and decorations, sipping your almond milk coco, warmed by a fire in the company of your loved ones.

Happy Holiday Season from Stinkweeds
[All of these albums are for sale, at Stinkweeds Records. Please, get them out of here]