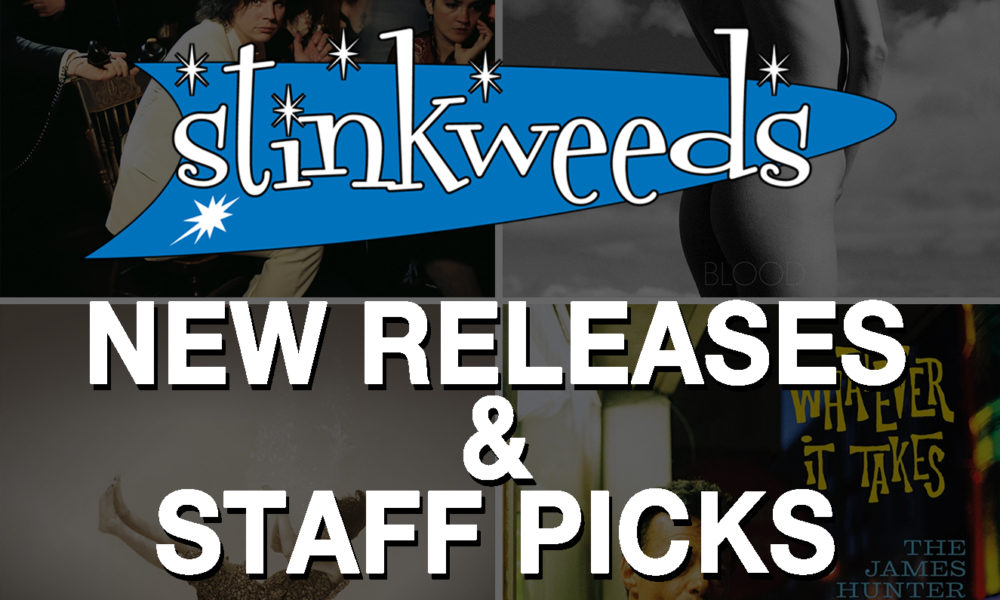 Bardo Pond – Volume 8 CD/LP+MP3 (Fire)
Volume 8 is the brand-new album from the neo-space rock stoner drone outfit. It’s a euphoric transcendental journey to a mountain top nirvana, a psychedelic tapestry that slowly unwinds as they travel onwards into the inner mind. A 40-minute opus delivered from a hail of reverb soulfully caressed by a ceremonial flute, that makes way for a shroud of Weld–era Neil Young fog. Bardo Pond is your rather ruffled tour guide to this far off place, this distant sense of wonderment at the crossroads with bewilderment.

Bat Fangs – Bat Fangs CD/LP+MP3 (Don Giovanni)
Slick and sick visions channeled from the midnight mirror world. Acid-soaked hard-rock to thrill the living and raise dead. Rooted in the pop-metal of time beyond memory, the tunes are dark and spiritually corrupted, but also boldly anthemic. They deliver thunder and feedback, wild energy and melodic uplift. Music meant to lay waste to the airwaves and unfold the collective cranium.

The BellRays – Punk Funk Rock Soul Vol. 2 CD/LP (U&Media)
Punk. Funk. Rock. Soul. The main ingredients in a potent witch’s brew that the Bellrays have been mixing for a long time now.

Anna Burch – Quit The Curse CD/LP+MP3 (Polyvinyl)
The deceptively complex pop of Quit The Curse marks the debut of this Detroit singer/songwriter. The nine tracks come on sugary and upbeat, but their darker lyrical themes and serpentine song structures are tucked neatly into what seem at first just like uncommonly catchy tunes. Burch’s crystal clear vocal harmonies and gracefully crafted songs feel so warm and friendly that it’s easy to miss the lyrics about destructive relationships, daddy issues and substance abuse that cling like spiderwebs to the hooky melodies. [Limited colored vinyl pressing also available.]

Pearl Charles – Sleepless Dreamer CD/LP (Kanine)
Pearl Charles has been playing music since she was 5 years old. At 18, she formed the country duo The Driftwood Singers with Christian Lee Hutson, singing and playing guitar and autoharp. At 22, she joined garage rock band The Blank Tapes on drums. After two fun-filled years immersed in the rock and roll lifestyle, she decided it was time to pursue her own songwriting, and began developing the songs that formed her eponymous debut 2015 EP. Her music career has been a chronological progression from old time music to ‘60s garage and psychedelia, ‘70s country rock and now ‘80s soft rock. Drawn to poppy hooks and catchy choruses, Charles draws on what she loves about each era while developing her unique style as a solo artist on her first full-length Sleepless Dreamer. The title-track single finds Charles refining the breezy, country-tinged pop which she demonstrated a knack for on her EP.

Kyle Craft – Full Circle Nightmare CD/LP+MP3 (Sub Pop)
Ever since his debut album Dolls Of Highland was released in 2016, Kyle Craft has been a critic’s dream. Based in Portland, Oregon he serves up all the observational, storytelling talent with none of the attitude that so often comes with male singer-songwriter territory. His second album, Full Circle Nightmare, is entirely autobiographical. Sonically, thematically, lyrically, it’s a huge leap forward from his 2016 release. The title Full Circle Nightmare refers to a moment where Craft saw his life for what it is and told himself to be satisfied. He described his debut record as: “like walking down this long hall of bizarre characters and surreal experiences, moving through the spider web of love and loss.” This album is when you get to the end of that hallway, turn around and see all the stuff you’ve been through, then walk through the door, close it and start a new chapter in an even crazier hallway. A straight-up rollicking rock ‘n’ roll album, it traverses all the different nuances of the genre; from the bluegrass twang of “Exile Rag,” to the gothic style of “Gold Calf Moan,” it’s a timeless piece that could exist in any of the past five decades.

Field Music – Open Here CD/LP+MP3/Cassette (Memphis Industries)
The two years since Commontime have been strange and turbulent. If you thought the world made some kind of sense, you may have questioned yourself a few times in the past two years. And that questioning, that erosion of faith – in people, in institutions, in shared experience – runs through every song on the new Field Music album. But there’s no gloom here. For Peter and David Brewis, playing together in their small riverside studio has been a joyful exorcism. Open Here is the last in a run of five albums made at the studio, an unprepossessing unit on a light industrial estate in Sunderland. Whilst the brothers weren’t quite tracking while the wrecking balls came, the eviction notice received in early 2017 gave the brothers a sense of urgency to complete the recording.

Hookworms – Microshift CD/LP (Domino)
Microshift is a record that largely pulls back the dense fog of guitars and Modern Lovers-esque blasts of organ that have become Hookworms’ hallmark, replaced instead by a plethora of electronics and synthesizers.

The James Hunter Six – Whatever It Takes CD/LP+MP3 (Daptone)
There is a common theme on Hunter’s sixth album. Whatever It Takes is not a record about infidelity, shallow seductions, fleeting backdoor trysts, or any of the other common clichés of R&B. These are poetic testaments to truer love. Loyalty, devotion, humility, and the inevitable regret of those who take love for granted.

Julian Lage – Modern Lore CD/LP (Mack Avenue)
Modern Lore finds Julian Lage playfully flipping the script he followed on his acclaimed 2016 album, Arclight. That album – produced, like Modern Lore, by Lage’s friend and collaborator, the singer-songwriter Jesse Harris – was his first trio set on electric guitar and found Lage inspired by the sounds and the attitude of the freewheeling, pre-bebop jazz era, when, as he puts it, “country music and jazz and swing were in this weird wild-west period.” This time he incorporates the sensibility, if not the outright sound, of early rock and roll, a similarly hybrid form driven by rhythm, personality and a passion for the electric guitar.

Steve Reich – Pulse/Quartet CD (Nonesuch)
Pulse (2015) is performed by the International Contemporary Ensemble (ICE) – an artist collective committed to transforming the way music is created and experienced – and Quartet (2013) is played by the Colin Currie Group, an ensemble led by percussionist Colin Currie that specializes in the music of Steve Reich; these are also the ensembles that gave the world premiere performances of the respective works. [Vinyl edition due March 30th.]

Rhye – Blood CD/LP (Loma Vista)
Blood is the much-anticipated sophomore album from romantic soul-pop group Rhye following 2013’s acclaimed Woman. Themed around the aftermath of love, Blood alluringly pairs the band’s sultry, subtle, funky brand of soul music with the warm, powerful, and totally unique vocals and lyrics of frontman Mike Milosh. “We’ve spent the last few years on the road translating the Woman album from a bedroom project into a full live experience. With Blood, it’s been the opposite process; the music and sounds were really born out of the live environment and are built for performance,” commented Milosh. “It takes a lot of courage to be vulnerable in front of an audience night after night. I use the same courage on every song on this record.”

The Wood Brothers – One Drop Of Truth CD/LP (Honey Jar)
The Wood Brothers’ sixth outing dives headfirst into a deep wellspring of sounds, styles and influences. Whereas their previous outings have often followed a conceptual and sonic through-line, here the long-standing Nashville-based trio treat each song as if it were its own short film.