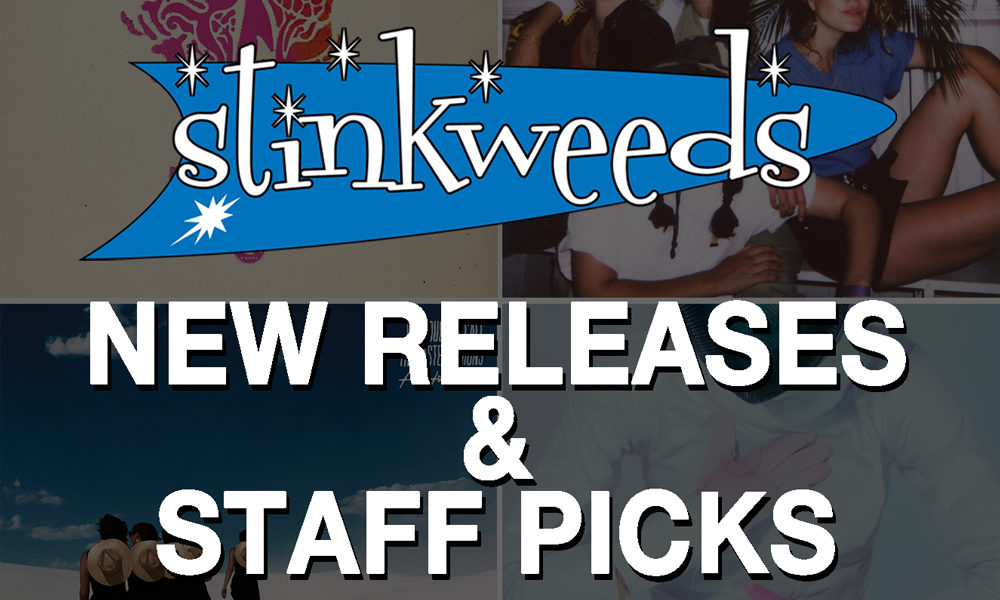 Blackberry Smoke – Find A Light CD/2xLP (3 Legged/Thirty Tigers)
Within Blackberry Smoke’s catalog, Find A Light is distinctive in several notable ways. The record sounds heavier than other albums; in fact, vocalist/lead guitarist Charlie Starr characterizes the churning, scorched-blues album opener, “Flesh And Bone,” as “maybe the heaviest song we’ve ever recorded.” And its title has deep significance to the record’s overarching themes. “Most of our albums have been named either for a song on the album or a lyric, and this time I didn’t want to do that,” Starr says. “I thought, ‘What headspace is humanity in as a whole?’ That’s pretty hard to argue with that. I think everybody is hoping and looking for something better right now.”

Diet Cig – Over Easy [Reissue/2015] CDEP/12” (Father/Daughter)
Diet Cig is a pop rock band from New Paltz, NY, fronted by Alex Luciano with Noah Bowman of Earl Boykins on drums. The five charming songs on their 2015 debut EP Over Easy, written by Alex in the comforts of her bedroom, capture the innocence of adolescence and infatuation with consistent sing-a-long lyrics and thrashing drums.

Eels – The Deconstruction CD/2×10” (PIAS America)
The Eels’ twelfth studio album and first in four years, The Deconstruction, was performed by E (Mark Oliver Everett) and longtime collaborators Koool G Murder and P-Boo alongside The Deconstruction Orchestra & Choir. It was produced by E, with some songs produced by Mickey Petralia for the first time since 1998’s Electro-Shock Blues. Eels mastermind E says of the new album, “Here are 15 new Eels tracks that may or may not inspire, rock or not rock you. The world is going nuts. But if you look for it, there is still great beauty to be found. Sometimes you don’t even have to look for it. Other times you have to try to make it yourself. And then there are times you have to tear something apart to find something beautiful inside.”

Hinds – I Don’t Run CD (Mom & Pop)
Hinds’ breakout debut Leave Me Alone (2016) was an album of party anthems drenched in metaphors. Follow-up I Don’t Run is the Madrid-based band’s return with an honest reflection on a period that changed their lives beyond their wildest imaginations. Co-produced by Hinds and Gordon Raphael (The Strokes, Regina Spektor), and engineered by Grammy winner Shawn Everett (Alabama Shakes, Perfume Genius, The War On Drugs, John Legend), the record shows a bigger, better, faster, funnier, more dexterous Hinds. With this second even more accomplished LP they continue their quest to own their narrative – one of sisters doing it for themselves. CD now, vinyl next week.

Hop Along – Bark Your Head Off, Dog CD/LP+MP3 (Saddle Creek)
Self-produced and recorded at The Headroom in Philadelphia by guitarist Joe Reinhart and Kyle Pulley, Hop Along’s third album Bark Your Head Off, Dog features the familiar sounds that have always made the band allergic to genre: grunge, folk, punk, and power pop all appear, with inspiration from ELO to Elvis Costello to ‘70s girl group vocal arrangements. This time around, they’ve added strings, more intricate rhythms, lush harmonies (featuring Thin Lips’ Chrissy Tashjian), along with a momentary visit with a vocoder. In more than one place, Mark Quinlan drums like he’s at a disco with Built To Spill. Most significantly, Bark Your Head Off, Dog shows the band at its strongest and most cohesive.

Sarah Shook & The Disarmers – Years CD/LP+MP3 (Bloodshot)
Years solidifies the point: Sarah Shook & The Disarmers have moved from getting people’s attention to commanding it. The bands’ new album-with its sharpened songwriting, unique perspective, deepened sound and roll-up-your-sleeves attitude-will grab you by the collar and put a defiant finger to your chest. It is resolute, blunt, and unflinching.

Son Volt – The Search [Reissue/2007] CD/2xLP (Transmit Sound)
Son Volt was one of the most instrumental and influential bands in launching the alt-country movement of the 1990’s. Originally released in 2007, and out of print for the past several years, this deluxe reissue of The Search features bonus content. [Limited colored vinyl pressing also available.]

Underøath – Erase Me CD/LP (Fearless)
Underøath return with their first new album in eight years – the Matt Squire-produced (Panic! At The Disco, 3OH!3) Erase Me. Right out of the gate, “It Has To Start Somewhere” burns like a rail dragster achieving top speed before hurling itself straight into the sun. “Wake Me” is almost pop that overshadows whatever manufactured nine-person co-writing session is currently being marketed on streaming-service playlists. “Rapture” feels like prog rock that traverses generations near and far, while Chris Dudley’s electronics drive “No Frame” into universes unknown. Even the first single, “On My Teeth,” seemingly sends a warning to listeners to protect their necks. Underøath may have tempered the punishing riffage of their previous releases, but they doubled-down on the urgency. Erase Me is the apex where melodic heft, indefatigable power, spatial resonance and arcane electronic textures converge to reveal a band that’s positively fearless. [Limited edition 180gm colored vinyl in special packaging also available.]

The Wonder Years – Sister Cities CD/LP (Hopeless)
The Philadelphia natives return with their new studio album of testimonials on love, loss, and finding commonalities in the human experience despite cultural differences.

Wye Oak – The Louder I Call, The Faster It Runs CD/LP+MP3 (Merge)
Wye Oak’s fifth album pursues a litany of modern malaises, each track diligently addressing a new conflict and pinning it against walls of sound, with the song’s subject and shape inextricably and ingeniously linked. A gripping and powerful set of songs built with melodies, movement, and emotions that transcend even the best of their catalogue. [Limited pressing on beige/blue colored vinyl also available.]

David Bazan/Sean Lane – Rare Coins LP (15 Passenger)
The Rare Coins Series spotlights an established artist who, in turn, chooses an up-and-coming artist they’d like to share a split release with. Fans not only receive new music from the artist they love, but also get a chance to hear music chosen by this artist. David Bazan was the lead singer for Pedro The Lion and a member of the band Headphones. Sean Lane is a drummer/percussionist. He’s played in bands such as Perfume Genius, and with David Bazan and Noah Gundersen. Limited gold colored vinyl pressing.

Zola Jesus – Okovi LP (Sacred Bones)
Released last September on CD – now available on vinyl. Nika Roza Danilova has been recording music as Zola Jesus for more than a decade. For the majority of that time, she’s been on Sacred Bones Records, and Okovi marks her reunion with the label. Fittingly, the 11 electronics-driven songs here share musical DNA with her early work on the label.