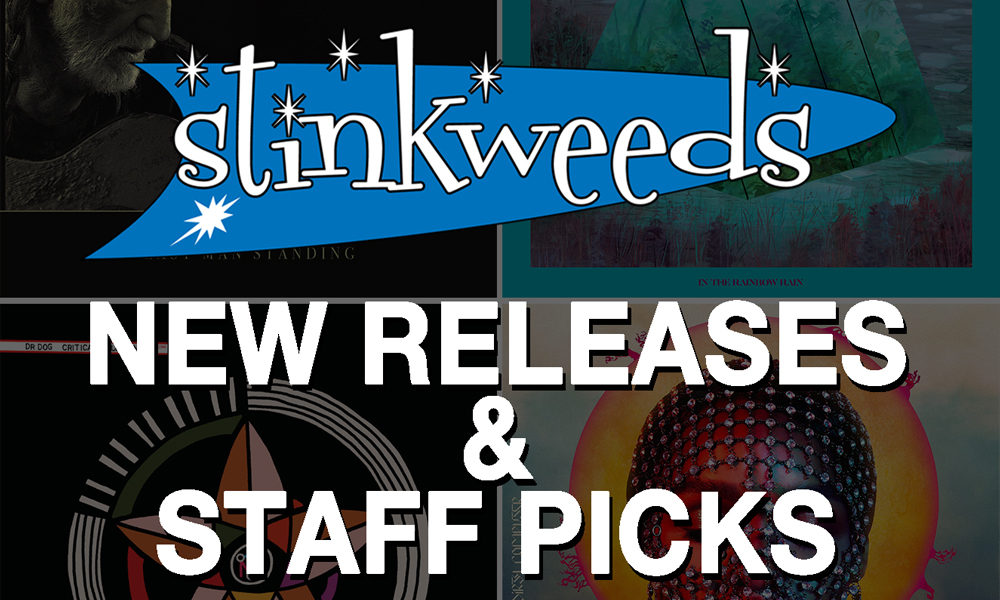 Dr. Dog – Critical Equation CD/LP (We Buy Gold)
“The guiding principle on Dr. Dog’s upcoming tenth album, Critical Equation, singer and guitarist Scott McMicken tells NPR, was a blunt one: ‘Fuck Dr. Dog.’ ‘I say that with as much love as you can have for anything,’ he says. ‘We’re different people now than we were 10 years ago, and we’ve grown so much as a band, but in certain areas we were stuck … we needed to blow it up and we needed some help doing that.’ This means going dark, without providing the sense of relief you might have in the past. This means subverting people’s expectations for your subverted expectations. “Listening In,” from Critical Equation, seems to say that the only way around paranoia, anxiety — around roadblocks — is to confront your fears and obstacles head on, to listen closely and decide your next move. The song, which opens the album, sneaks and creeps to a bobbing minor-key melody from bassist Toby Leaman, a slow kick-snare beat from drummer Eric Slick, and an anxious guitar chord progression by Frank McElroy. McMicken enters on barely a whisper, singing of hearing voices from pets and voices from the night sky. His nerves seem frayed, but he isn’t quite ready to admit why.” – NPR

God Is An Astronaut – Epitaph CD/LP (Napalm)
Ever since forming 16 years ago, Irish quartet God Is An Astronaut has reigned as one of the premier instrumental groups with their fusion of intense rock instrumentation, ethereal and emotional soundscapes, awe-inspiring dynamics, and transfixing melodies. The band’s ninth emotive opus, Epitaph, is a record that both sees a progression in their sound while still remaining true to their ethos that helped define them. The opening title track, “Epitaph”, sets the mood. There is pain and loss at work here, but not pain and loss that are given in to. Sparse piano motifs face energetic rhythms, shimmering guitar coatings, and eruptions of dense fury breathe life into a journey of melancholic longing. There is the release experienced when a troubled existence ends in “Mortal Coil” coupled with the somber foreshadowing that is “Winter Dusk.” The album changes direction slightly with “Seánce Room” and the music on this highway is taking you someplace meaningful and special – someplace where near and far blur and stars weep over tragedies.

Grouper – Grid Of Points CD/LP (Kranky)
Not long after recording her tenth album Ruins, Liz Harris traveled to Wyoming to work on art and record music. She found herself drawn towards the pairing of skeletal piano phrasing with spare, rich bursts of vocal harmony. A series of stark songs emerged, minimal and vulnerable, woven with emotive silences. Inspired by “the idea that something is missing or cold,” the pieces float and fade like vignettes, implying as much as they reveal. She describes them as “small texts hanging in space,” impressions of mortality, melody, and the unseen—fleeting beauty, interrupted. Grid Of Points stands as a concise and potently poetic addition to the Grouper catalog.

Janelle Monáe – Dirty Computer CD (Bad Boy)
New album and follow up to The ArchAndroid (2010) and The Electric Lady (2013). Includes the singles “Make Me Feel” and “Django Jane”. “It was obvious as soon as Janelle Monáe dropped the video for her new song ‘Make Me Feel’ that Prince was a major influence on Dirty Computer. The future soul singer had a close relationship with the late icon, so his having an impact on her music is far from surprising. It looks like Prince’s contributions to Monáe’s new LP were more than inspirational, however, as he reportedly contributed to the production of Dirty Computer.” – Consequence Of Sound

Willie Nelson – Last Man Standing CD/LP (Sony Legacy)
First album of all Willie Nelson originals in 22 years. Arriving just in time for his 85th birthday, Last Man Standing, comprised entirely of songs newly-penned by Willie (and longtime collaborator and producer Buddy Cannon), is the worthy successor to 2017’s God’s Problem Child, which showcased seven Nelson-Cannon compositions. An album that acknowledges the transience of time while marveling at the joy, beauty and surprise the world has to offer, Last Man Standing finds Willie Nelson rolling at a creative peak, writing and singing and playing with the seasoned wit and wisdom that comes from the road.

Okkervil River – In The Rainbow Rain CD/LP (ATO)
On Okkervil River’s new album, In The Rainbow, bandleader Will Sheff makes a startling left turn from their critically-lauded and inward-looking 2016 album Away, crafting an exuberant declaration of hope. In place of Away’s somber strings and acoustic textures, In The Rainbow Rain is full of dazzling color, spattered with starbursts of electric guitar, big blooms of synth, and a chorus of backing vocals. It’s a buoyant and playful record, but also open and emotionally vulnerable. Sheff says, “I wanted to make a record where a sense of kindness felt encoded into the music.” Akin to a modern secular gospel record, highlights include driving, melodic anthems “Love Somebody” and “Pulled Up The Ribbon,” and “Famous Tracheotomies,” which chronicles notable figures who’ve endured the titular procedure, including Gary Coleman, Dylan Thomas, Ray Davies, and Sheff himself. “In places, the record deals with heavy things like trauma and betrayal and shame, but, actually, it’s supposed to be a good time,” says Sheff. “I hope it’s something fun, that makes people feel happier.” [Limited edition white colored vinyl pressing also available.]

Pharaoh Overlord – Zero CD/LP (Hydrahead)
Pharaoh Overlord steer an exceedingly singular course on Zero. Augmented by Antti Boman (Demilich) and Hans Joachim Irmler (Faust), the psychedelic supergroup (consisting of members from Circle) have taken their oeuvre to a whole new psychiatric plateau on their ninth studio album. Libido-driven arithmetics do not apply on these aberrant tracks. Zero provides an offbeat rock and roll implosion, with its sonic realm contorting inwards like a sapient voice muffled by the gentle void of cyberspace. What the album really has to offer more than anything is exposure to genuine ingenuity.

Speedy Ortiz – Twerp Verse CD/LP+MP3/Cassette (Carpark)
“Necessary brattiness” is the motto for Speedy Ortiz’s dauntless new collection of songs, Twerp Verse. The follow-up to 2015’s Foil Deer, the band’s latest indie rock missive is prompted by a tidal wave of voices, no longer silent on the hurt they’ve endured from society’s margins. But like many of these truth-tellers, songwriter, guitarist and singer Sadie Dupuis scales the careful line between what she calls being “outrageous and practical” in order to be heard at all. “You need to employ a self-preservationist sense of humor to speak truth in an increasingly baffling world,” says Dupuis. “I call it a ‘twerp verse’ when a musician guests on a track and says something totally outlandish – like a Lil Wayne verse – but it becomes the most crucial part. This record is our own twerp verse, for those instances when you desperately need to stand up and show your teeth.” The record pulls from the most elastic pop moments in Squeeze’s Argybargy and the seesawing synth-rock of Deerhoof and the Rentals. Tuned smartly to the political opacity of the present, Twerp Verse rings clear as a bell. [Limited pink colored vinyl pressing also available.]

Twin Shadow – Caer CD/LP (WB)
Twin Shadow, the project of George Lewis Jr., is back with his fourth album Caer (pronounced: ka-air). Falling is a theme that surfaces throughout the record, which is why Lewis called it Caer – the Spanish word for “to fall.” The album serves as a powerful lens through which he explores his own personal sense of falling, as well as what he has observed about a world that feels as if it’s declining. On a larger scale, Caer feels extraordinarily current, given what’s going on culturally and politically right now. “The patriarchy is falling apart,” Lewis says. “Our perceptions of who we are as human beings, because of technology and machines, are falling apart. We’re living at a breaking point, and a lot of the themes on the album are talking about these fault lines.” Lewis refers to such fissures on “Saturdays” (which features Haim). “It’s a love song,” he says. “‘Saturdays’ is the heaven place you go to when you’re in love or even with friends, feeling your youth. But it’s also about my feeling that the world is starting to tear itself apart and maybe we’re falling through the cracks. But when you’re lying in bed next to someone you care about, none of that seems real.”

Ben Frost – All That You Love Will Be Eviscerated 12” (Mute)
Limited edition 12” single. The title track comes from The Centre Cannot Hold, recorded over ten days by Steve Albini in Chicago. The music exists not in space, but in a space; it is a document of an event, of a room, and of the composer within it. It is music that is not fully controlled and appears to be anxiously, often violently competing against its creator. It is an attempt to materialize a kind of liquid music.

Massive Attack – Heligoland [Reissue/2010] 2xLP (Virgin)
Vinyl reissue of the fifth studio album by British trip-hop duo. The record features the singing of Horace Andy plus invited vocalists: Tunde Adebimpe of TV on the Radio, Damon Albarn of Blur and Gorillaz, Hope Sandoval of Mazzy Star, and many others.