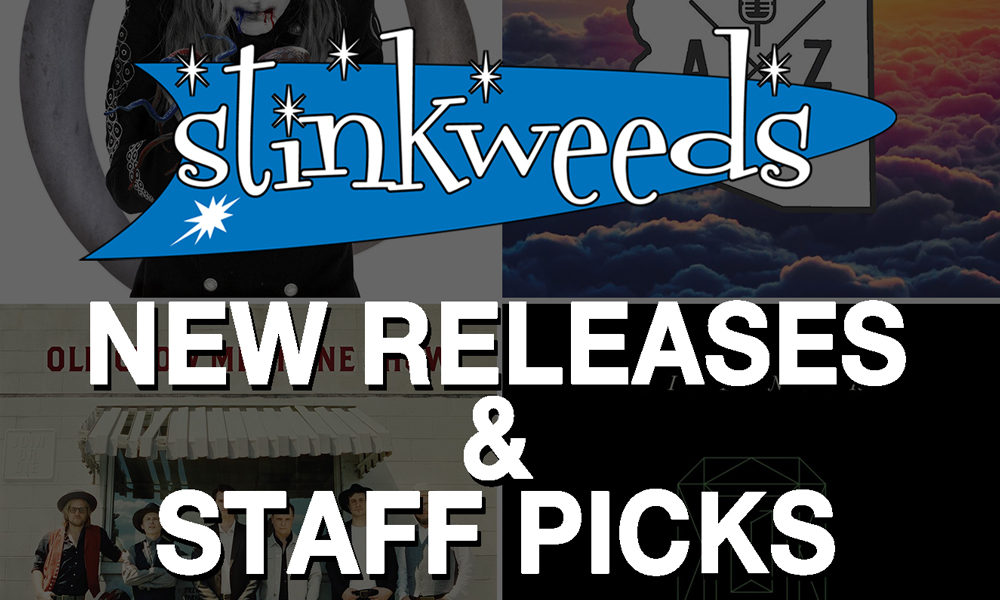 Exitmusic – The Recognitions CD/LP (Felte)
While many couples can trace the real time rise and fall of their relationship back to social media feeds and harried phone calls, Aleksa Palladino and Devon Church have channeled the highs and lows of their storybook courtship into something else entirely: the explosive, discomforting confessionals of Exitmusic. The mercurial project started the year they got married (2004) and all-but-imploded during their recent divorce, but not before the duo wrapped its most fully realized collection of beautifully damaged music yet titled The Recognitions.

Joshua Hedley – Mr. Jukebox CD/LP (Third Man)
With the release of his highly anticipated debut album Mr. Jukebox via Third Man Records, Joshua Hedley embraces the role he was born to play: this generation’s classic country champion. The heartbreaking, distilled, defiantly classic country he plays is a beacon for ‘60s honky-tonk devotees everywhere. Album opener “Counting All My Tears” carves out the collection’s gloriously tear-jerking territory from the jump. As “oooooohhhs” and “aaaaahhhs” serve as spine-tingling harmonies – a classic-country flourish carried throughout Mr. Jukebox – lonely piano is joined by a familiar cast including steel and of course, fiddle. Title track “Mr. Jukebox” is a swinging nod to those beloved machines – both inanimate and breathing – that dependably play a lot of songs for a little money. It’s impossible to listen to the tune and not smile thinking of Hedley’s years logged in cover bands on Nashville’s Lower Broad. When asked what he hopes listeners get out of Mr. Jukebox, Hedley doesn’t hesitate. “I just want people to remember they have feelings, and that they’re valid,” he says. “Not everything is Coors Light and tailgates.”

Kimbra – Primal Heart CD/LP (WB)
As humans, we inherently seek, crave, and thrive on love. We just chase it like a predator or dawn on the heels of darkness. The primordial bond between instinct and passion drives Kimbra’s third full-length album, Primal Heart. Co-produced with Grammy winning producer John Congleton (Lana Del Rey, St. Vincent), the music represents a leap in confidence for the singer. Lead single, “Everybody Knows” elegantly stiches together metronomic xylophone, woozy synths, and an unpredictable bass thud as her voice takes center stage, blossoming from delicate verses into a definitive hook. Elsewhere on the record, a tribal stomp, finger-snaps, and video game-style flourishes warble under Kimbra’s spellbinding delivery during “The Good War.” The ebullient and energetic “Black Sky” slips into a noir-ish croon for “Past Love.” She also teams up with Skrillex on the world music-induced global spiral of “Top Of The World.” The album seamlessly tempers moments of bass-heavy empowerment and strength with intimate vulnerability, covering a gamut of emotions and moods.

Lord Huron – Vide Noir CD/2xLP (Republic)
Vide Noir was written and recorded over the past two years at Lord Huron’s Los Angeles studio and informal clubhouse, Whispering Pines, and was mixed by Dave Fridmann (The Flaming Lips/MGMT). Singer, songwriter and producer Ben Schneider found inspiration wandering restlessly through his adopted home of L.A. at night. A true multi-media artist, Schneider has once again created an adorned world to inhabit within Vide Noir: the album is accompanied by a wealth of imagery, films and immersive experiences crafted to expand upon its narratives and themes.

Mien – Mien CD/LP (Rocket Recordings)
Debut album by the exciting new four piece band comprised of The Black Angels’ Alex Maas, The Horrors’ Tom Furse, Elephant Stone’s Rishi Dhir and The Earlies’ John-Mark Lapham. “It would be impossible to imagine a better line-up than these four veterans of psych and indie-rock, and the product of their hard work is every bit as brilliant as you’d imagine. Fuzzy-headed psychedelic swirls, thumping percussion and chugging, kosmische riffs.” — Picadilly [Limited colored vinyl pressing also available.]

Old Crow Medicine Show – Volunteer CD/LP+MP3 (SME Nashville)
Roots band Old Crow Medicine Show return with their first album of original material since 2014’s Grammy-winning Remedy. The songs on Volunteer illustrate themes that resonate far beyond Old Crow Medicine Show’s diverse fan base, while also showcasing the depth in the group’s songwriting. An album highlight “Look Away” inspired by The Rolling Stones, is Ketch Secor’s homage to his love for the history, both sorrowful and joyful, of the South. “A World Away” is an upbeat homage to refugees, an extremely relevant subject matter that Secor has been writing about since he was young. “Dixie Avenue” pays a playful tribute to the Virginia location where Secor and bandmate Critter Fuqua fell in love with music. The album’s final track, the bittersweet love song “Whirlwind,” could easily tell the tale of how Old Crow Medicine Show built a successful career from the ground up. While trends in music have come and gone, Old Crow Medicine Show has maintained their sense of integrity, continuing to share their infectious hybrid of traditional mountain music across the country.

Post Animal – When I Think Of You In A Castle CD/LP+MP3 (Polyvinyl)
Like most band’s in Chicago’s inclusive music community, Post Animal got their start playing DIY basements and small rock clubs. With their wavy and warped first project 2015’s Post Animal Perform The Most Curious Water Activities EP and then 2016’s memorable singles collection The Garden Series, the band showcased mesmerizing and infectious pop melodies. Between their impressive early releases and their wild live shows which feature the band members sharing lead vocal duties, Post Animal have unquestionably solidified themselves as one of Chicago’s most exciting up-and-coming acts. [Limited colored vinyl pressing also available.]

The Black Lips – The Black Lips [Reissue/2002] LP (Bomp!)
Limited edition ‘starburst’ colored vinyl reissue. The Black Lips came screaming out of Atlanta, Georgia with this their self-titled debut album. Their eponymous debut album is heavy on ‘60s psychedelia and garage rock and they show glimpses here of the niche they would expand upon on future releases.

The Creation – We Are Paintermen [Reissue/1967] LP (Numero)
The Creation’s only LP, cut from the original mono masters for the first time since 1967. Producer Shel Talmy masterfully captured every bow scrape, tom rattle, and mod growl before the UK quartet imploded after two brilliant, but short years. Originally issued only in Germany, We Are Paintermen collects the Creation’s first three singles and adds a handful of period covers culled from the band’s raucous stage show. Pressed on heavy-weight colored vinyl to make even the most seasoned collector sweat. Limited colored vinyl pressing also available.

Mike Donovan – How To Get Your Record Played In Shops LP/Cassette (Drag City)
The Peacers / Sic Alps lead singer Mike Donovan steps out from behind the ash-stained curtain for his second solo album in the past five years. The Donovan oeuvre is not something you’re meant to think about—instead, enjoy the soupy soak, sliding beneath its opaque and filmy surface to discover the sensual world in the moat below. But if you had time to think, you might reflect that this music blooms from ’neath the gritty carpet of the USA herself, sighted psycho-acoustically via SF futures and pasts, through rose-colored lenses shoved in and now cracking at the edges, amid hoots and cries from mystery pursuers in the historical, but now-less-than-fully-existent boho jungle.

Erasure – World Beyond LP (Mute)
Following on from the release of World Be Gone in May 2017, Erasure present its companion piece, World Beyond, a completely re-recorded version of the album featuring classical interpretations of the tracks.

Jonny Greenwood – Phantom Thread [Original Motion Picture Soundtrack] 2xLP (Nonesuch)
“Greenwood is a student who revels in homework. Like [Paul Thomas] Anderson during the early conception of a film, there is allowance for open channels of influence from sources of curiosity. For this tale, Anderson studied the lives, if not the styles, of famous fashion designers Cristóbal Balenciaga and Christian Dior and the obscure gothic fairytales of M. R. James and Beatrix Potter’s The Tailor of Gloucester. In coordination close and far, Greenwood absorbed the musical trends of the 1950s, gleaning from Nelson Riddle and the full string-section jazz arrangements of Ben Webster, as well as Glenn Gould’s Bach recordings. The outcome rolls though accentuation of the haunting, beguiling and exhilarating, the delicate and intensifying, the fanciful and ominous, sewn with the discretion of a tailor to accompany the precise tone of every scene.” – Under The Radar

Tim Heidecker – Too Dumb for Suicide: Tim Heidecker’s Trump Songs LP (Jagjaguwar)
“Well here it is. About one year in the making, all my Trump songs in one place. Most of these songs were written and recorded quickly, with the blood still boiling from whatever indignity or absurdity had popped up on my newsfeed that day.”