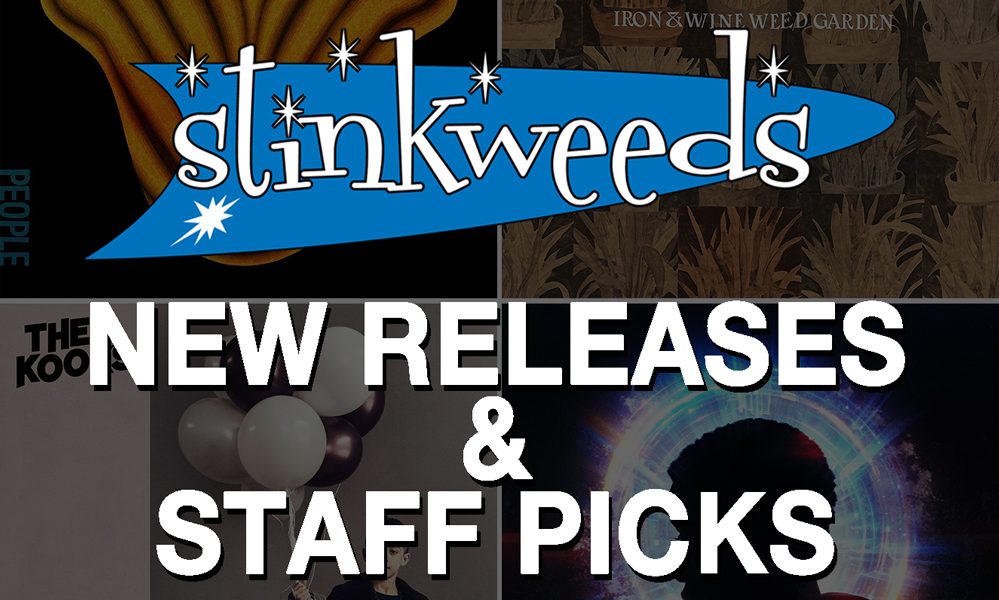 Iron & Wine – Weed Garden CDEP/12”+MP3 (Sub Pop)
Iron & Wine follow up their 2018 Grammy-nominated full-length Beast Epic with Weed Garden, a collection of material that began about three years ago. The six-song EP features songs that were part of the writing phase for Beast Epic but went unfinished. They were part of a larger narrative for principal songwriter Sam Beam, who ran out of time to get them where they needed to be for inclusion on Beast Epic. Weed Garden also includes the fan favorite “Waves Of Galveston”. While on tour last fall, the final pieces of material took shape and a sense of urgency prevailed in bringing these characters full circle. To resolution. To completion. In January, Beam and company hunkered down in Chicago at The Loft recording studio to capture these six songs. No more, no less.

The Kooks – Let’s Go Sunshine CD/2xLP (Lonely Cat/Awal Recordings)
The Kooks’ bold new long-player Let’s Go Sunshine distills their timeless sound into its purest form while pushing it forward into a more expansive and mature space. It’s a moving, energizing and timelessly melodic record that’s incisive in its portrait of modern British urban life. The heart and soul of the album lies in its hymns of lost innocence, fading relationships and the process of break-up and recovery. It’s the sound of an ambitious, confident band stepping out and making a statement with their definitive album. Let’s Go Sunshine sees the band cement their status as true bastions of British guitar pop and take their rightful place at the table next to the celebrated bands that influenced them in their infancy, over a decade ago. [Limited white colored vinyl pressing also available.]

Amos Lee – My New Moon CD/LP (Dualtone)
Singer/songwriter Amos Lee says his seventh studio album My New Moon is “a dedication…it’s an offering – an altar of sorts to those who have shared their sorrows with me.” It is a product of profound human experiences; loss, grief, hope, healing, love, sorrow, and rejuvenation. Each track on My New Moon takes a journey through these intense and personal experiences. The album reflects the darkness and the light that we all both experience and bring into the world, and how through these personal experiences and hard times, we grow more connected to one another.

Mass Gothic – I’ve Touted You Long Enough CD/LP+MP3/Cassette (Sub Pop)
I’ve Tortured You Long Enough is the tongue-in-cheek title of Mass Gothic’s second album. Husband/wife duo Noel Heroux (Hooray For Earth) and Jessica Zambri have always dipped in and out of each other’s creative spaces, advising on their respective outputs and supporting one another. But, until this record, they had never completely committed to doing an entire album as a duo, sharing an equal load. The result is a record packed with the tension, chaos and beauty of a fluid and cathartic two-way conversation. In a universe that increasingly threatens our abilities to communicate and coexist, their creative union isn’t just inspired but important. The final product recalls the frantic energy of Animal Collective and the celestial torch-bearing of Bat For Lashes and reveals a remarkable arc. It begins from a place of uncertainty, disquiet, and self-doubt, and concludes with the comfort in knowing that you can be both independent and successful in a relationship.

Alkaline Trio – Is This Thing Cursed? CD (Epitaph)
According to Alkaline Trio, new album Is This Thing Cursed? is a cousin or sibling to 1999’s Maybe I’ll Catch Fire. Dan Andriano explains, “the songwriting process is almost like what it was back in the day. We would just kind of write a song, be excited about it, then move on. We wrote in that spirit in the studio. I really feel like we made a record that the old school fans are going to dig.” [Vinyl edition due October 19.]

The Band – Music From Big Pink [Reissue/1968] CD/2xLP/CD+Blu-ray Audio+2xLP+7” (Capitol)
In celebration of the 50th Anniversary of The Band’s landmark debut album, Music From Big Pink has been digitally remastered and reissued on CD and vinyl featuring a new stereo mix of the album, produced by Bob Clearmountain from the original four-track analog master. This new mix achieves a striking clarity and incorporates some previously unreleased chatter from the studio sessions. For the LP, Chris Bellman cut the vinyl lacquers for the album’s new stereo mix at 45rpm at Bernie Grundman Mastering, expanding the album’s vinyl footprint from one LP to two.

Big Red Machine – Big Red Machine CD/LP/Cassette (Jagjaguwar)
New collaboration between Bon Iver’s Justin Vernon and The National’s Aaron Dessner. Each song includes a large number of collaborators via the PEOPLE platform. PEOPLE is a steadily growing group of international artists who have come together to create and share their work freely, with each other and everyone. It was born out of a wish to establish an independent and nurturing space in which to make work (generally around music) that is collaborative, spontaneous and expressive in nature and where all unnecessary distractions or obstacles that get in the way are removed.

Anna Calvi – Hunter CD/LP+MP3 (Domino)
The third album from Anna Calvi, is the embodiment of the feeling of truly letting go. For the experimental, art-rock singer-songwriter it was a catharsis, and an opportunity to be more truthful than she ever had been before. It was time to stop holding back. Unapologetic and no prisoners spared, Hunter is an album of harder percussion, darker lyricism, and more thrashing guitars than Calvi has used before, walking us through a journey exploring power within femininity, transcending sexual taboos and breaking the laws of gender conformity.

Darwin Deez – 10 Songs That Happened When You Left Me With My Stupid Heart CD/LP (Lucky Number)
An equal mix of indie, wacky, Beck, and Fleetwood Mac, Brooklyn’s Darwin Deez is skilled at mixing sunshine pop with some indie attitude and lo-fi dissonance, but he’s been known to drive audiences crazy with his offbeat, Napoleon Dynamite-like dance routines.

Mogwai – KIN [Original Motion Picture Soundtrack Music] CD/LP+MP3 (Temporary Residence)
The staggeringly prolific force that is Mogwai return less than a year after their standout new album, Every Country’s Sun, to provide the soundtrack to the anticipated, acclaimed new sci-fi major motion picture, KIN. Like their beloved soundtracks to Atomic and Les Revenants, KIN uses the band’s original score as the genesis and point of departure for an expanded, fully developed album of new songs. KIN is cinematic maximalism and synth-rock minimalism delivered with the signature introspective grace that has defined and refined Mogwai’s decades-long reputation. [Limited colored vinyl pressing also available.]

Jake Shimabukuro – The Greatest Day CD (JS Productions/Mailboat)
Jake Shimabukuro is well known in Hawaii and Japan due to his early solo career in the early 2000’s and his international fame that happened in 2006 when a video of him went viral, playing a rendition of “While My Guitar Gently Weeps” was posted on YouTube without his knowledge. He returns with a new album, The Greatest Day.

Still Corners – Slow Air CD/LP (Wrecking Light)
Evoking the atmospheric sounds Still Corners are known for, Slow Air continues the band’s journey with an album full of tension and brooding all the while wrapped in a reverb laden dream.

Tash Sultana – Flow State CD/LP+MP3 (Mom + Pop)
Tash Sultana is a young, dynamic Melbourne artist. Her vocals shine with a magical quality, she has a natural gift for melody and her instrumental dexterity is from another planet. Sultana enjoys eschewing musical boundaries, including the very notion of what a solo multi-instrumentalist can do. This fearless DIY ethos comes through now more than ever in the 15 instruments used to create her highly-anticipated album Flow State. [Limited deluxe colored vinyl pressing also available.]

Swingin’ Utters – Peace And Love CD/LP (Fat Wreck Chords)
The rebellious spirit of the Swingin’ Utters is as present as ever on Peace And Love, although the band looks and sounds a little bit different this time around, thanks to their new rhythm section of Tony Teixeira on bass and Luke Ray on drums. It’s also been four years since the Utters’ last full-length, so all three songwriters in the band had a stockpile of material when they headed into the studio. “This is, by far, our absolutely most political record we’ve ever done. We don’t generally write very pointedly political songs. We tend to be a little more vague and abstract. But this one is pretty pointedly disgusted and pissed off and really directly attacking these fuckin’ people in office.”

Thou – Magus CD/LP (Sacred Bones)
While sonically Magus may be a continuation of 2014’s Heathen, thematically it stands as a stark rebuttal, a journey beyond the principles of pleasure and pain. FFO alienation, absurdity, boredom, futility, decay, the tyranny of history, the vulgarities of change, awareness as agony, reason as disease.

Wild Nothing – Indigo CD/LP (Captured Tracks)
From the opening drum beat, chiming guitar, and sweeping synth of “Letting Go” to the Bryan Ferry vocal turn on “Oscillation” to the ’80s-heavy blips, clicks, and strut of “Partners in Motion,” it’s clear that Indigo is at once vintage Wild Nothing and a bold, new leap into a bigger arena. [Limited blue colored vinyl pressing also available.]

David Bazan – Care LP+MP3 (Polyvinyl)
As much of a follow-up to 2005’s synth-heavy Headphones album as it is to 2016’s Blanco, Care (2017) also finds David Bazan getting back to the calm minimalism of early Pedro The Lion. Produced, recorded, and mixed by Bazan and legendary Oregon-based producer Richard Swift, bare synthesizers dominate the tracks, giving Care an intimate, personal sound. The vocals are close, mirroring the experience from the front seat at a house show. Steady, sparse beats tie the ten tracks together, thrumming a boom-tap, boom-tap like a thread.

Faust – The Faust Tapes [Reissue/1973] LP (Superior Viaduct)
Faust stand among the most influential creative forces to have emerged from Germany in the late ’60s and early ’70s. Along with Can, Agitation Free, Neu! And others, Faust rejected the Anglo-American norms of rock ‘n’ roll to start a back-to-basics and uniquely Teutonic revolution in sound-later dubbed by the UK press with the semi-derogatory term “krautrock”.

Soundgarden ‎– A-Sides [Reissue/1997] 2xLP (A&M)
Available for the first time on vinyl as a 180gm double-LP-set, A-Sides is a 1997 compilation album spanning Soundgarden’s career up that point and last official release until 2010’s Telephantasm. The 17-track collection gathers classic material from Ultramega OK (1988), Louder Than Love (1989), Badmotorfinger (1991), Superunknown (1994) and Down On the Upside (1996) like “Loud Love”, “Jesus Christ Pose”, “Outshined”, “Rusty Cage”, “Spoonman”, “Black Hole Sun”, “The Day I Tried to Live”, “Fell On Black Days” and “Blow Up The Outside World” plus “Bleed Together” which appeared on import copies of the “Burden In My Hand” single.