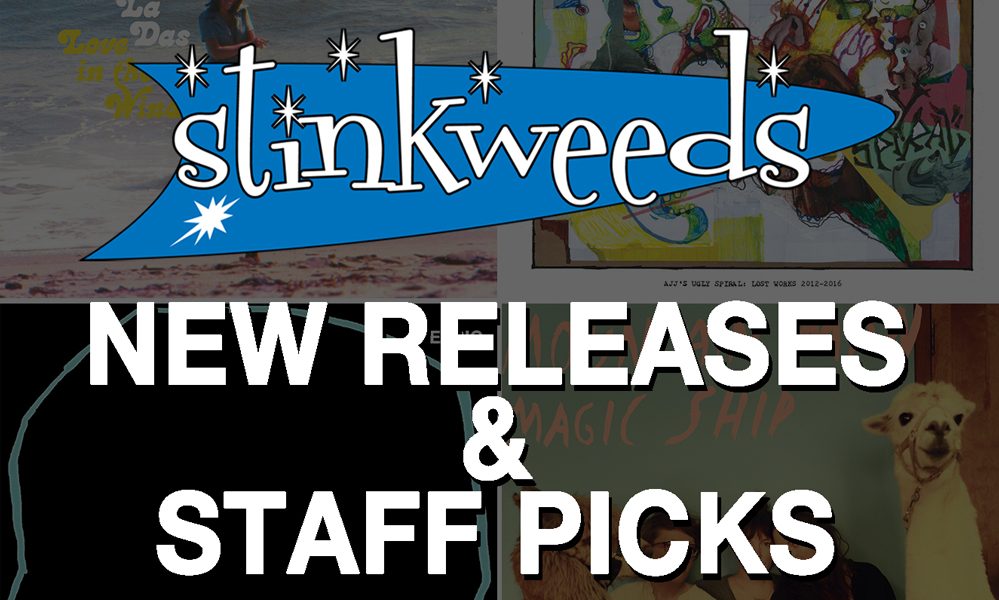 Carl Broemel – Wished Out CD/LP (Stocks In Asia)
Years before Carl Broemel joined My Morning Jacket – the Grammy-nominated, globetrotting rock band featuring his guitar playing, saxophone solos, harmony singing, pedal steel riffs, and songwriting support – he wrote his very first songs in his Indiana bedroom. From the start, he was a multi- instrumentalist with a singer’s gift for melody. A sideman capable of handling a frontman’s job. As his guitar-playing career blossomed, Broemel continued writing songs of his own, carving out a personal, introspective sound that reached beyond My Morning Jacket’s sonic landscape. With his third solo album, Wished Out, he merges articulate, pensive songwriting – including ruminations about science, love, the passing of time, and the grind of the artistic struggle with energetic, rock-inspired songs.

Christine and The Queens – Chris CD/2xLP+CD (Because Music)
Christine and The Queens’ eagerly anticipated second album Chris was written, arranged and performed by French singer/songwriter/producer Héloïse Letissier and follows-up her already-iconic debut record Chaleur Humaine. “Chaleur Humaine was about teenage years, most of it,” says Letissier. “Loneliness, really true feelings, and there is a softness in the way I wrote as well, because I was properly introducing myself.” Chris arrives on different terms. “It gets to be a bit more exhilarating, because I get to say, okay, I’ve been introduced now. I get to be more confident, and it matches what happened in my life as a woman.

Denzel Curry – TA13OO CD/LP (Loma Vista)
Denzel Curry’s highly-anticipated third album TA13OO is presented in three acts: Light, Gray and Dark. Each early single represents one of the album’s acts, as “Sumo” represents Light, “Clout Cobain” represents Gray, and “Percs” represents Dark, which come together cohesively to form TA13OO. Across the three sections of TA13OO, Denzel explores topics including molestation, the presidential election, fame, hatred, paranoia, revenge, love, the current state of music and personal tales of his own near-death experiences. Sonically, the album ranges just as widely as its subject matter, sounds of paranoia, fear of loss, brooding melancholy and mood swings straight from hell all find their way onto TA13OO. The album bridges the gap between the older generation of hip-hop and the budding generation of SoundCloud rappers that he helped birth in sound and style, all while commanding respect from them both with lethal lyricism and deeply personal storytelling. [“Red slushy” colored vinyl pressing also available.]

Metric – Art Of Doubt CD/2xLP (BMG)
Toronto rockers Metric emphasize guitars on Art Of Doubt, a collection of 12 new songs packed with massive riffs, driving rhythms and raw/smooth vocals – all elements of the band’s instantly identifiable signature sound. Produced by Justin Meldal-Johnsen (M83, Beck, Nine Inch Nails), Metric’s seventh LP addresses a climate of cultural and political anxiety while refusing to give despair the upper hand. In many ways, it’s the most Metric album the band has ever made as Emily Haines, Jimmy Shaw, Joshua Winstead and Joules Scott-Key rediscover their shared love of music and how good they are at making it together. “This felt like the culmination of a lifetime spent playing together and trusting each other and going for it,” Shaw says. [Limited white colored vinyl pressing also available.]

Mutual Benefit – Thunder Follows The Light CD/LP (PIAS America)
Thunder Follows The Light contemplates the ongoing destruction of the outer world and how it shapes the storms of our inner ones. There are meditations on the environment, collective struggle, death, rebirth, reasons to believe it’s worth the fight. For nearly a decade, Jordan Lee aka Mutual Benefit has crafted pop experiments blending orchestral instrumentation and ambient electronic sounds. Thunder Follows the Light is a testament to the power of music as a space for collective processing and emotional response. Like his other releases, it is a highly collaborative document. Its sprawling chamber folk features many returning collaborators – violinist Jake Falby, guitarist Mike Clifford, percussionist Dillon Zahner – as well as first-time players – vocalist Johanne Swanson (of Yohuna), drummer Felix Walworth (of Told Slant), saxophonist Gabriel Birnbaum (of Wilder Maker).

AJJ – Ugly Spiral: Lost Works 2012-2016 CD/LP (SideOneDummy)
Since 2004, the folk/punk (not folk-punk) band has been a sort of desert prophet, emerging regularly from the 120° Arizona heat to take America to task for all the hypocrisies it won’t admit. White privilege, violent impulses, religious madness.

Amy Helm – This Too Shall Light CD/LP+MP3 (Yep Roc)
During the This Too Shall Light sessions, Amy Helm was literally taken 3,000 miles out of her comfort zone – leaving the family studio in Woodstock, NY for Los Angeles, CA’s iconic United Recording Studios, the same compound where The Beach Boys recorded Pet Sounds. It was there that Helm began her collaboration with Joe Henry, the three-time Grammy-winning producer known for his work with artists like Bonnie Raitt, Elvis Costello and Lizz Wright. Together, in just four days, the pair traversed decades of material, stretching from early ‘70s Allen Toussaint through contemporary Americana darlings the Milk Carton Kids. [Limited colored vinyl pressing also available.]

MIKE – Renaissance Man CD/LP (Lex)
Born in New Jersey, MIKE moved to London with his mother before settling in The Bronx for the remainder of his later teenage years. Both regions have had an audible influence on the young rapper’s music – in England, he was immersed in grime and the music of King Krule, and in the United States, he was turned on to Earl Sweatshirt and MF DOOM.

The Necks – Body CD (Northern Spy)
“The Necks’ 20th album is as laser-focused on repetition as ever. But for the first time, the trio indulges its rock’n’roll instincts, resulting in one of the most powerful albums in the band’s catalog.” [8.0] – Pitchfork

Sha La Das – Love In The Wind CD/LP+MP3 (Daptone)
Direct from Staten Island, the Sha La Das (a play on their surname, Schalda) is a musical family in every sense of the phrase. Real-deal, shoot-from-the-hip group harmonies rooted in doo wop, blues and soul. The band is comprised of Patriarch, Bill – who honed his skill and cultivated his ear for harmonies at an early age, singing on the streets of Brooklyn with other neighborhood kids – and his sons Will, Paul and Carmine, all musicians in their own right (The Extraordinaires, Swivs, Paul And The Tall Trees).

Sumac – Love In The Shadow CD/LP+MP3 (Thrill Jockey)
Listeners who followed the Northwest trio Sumac down the tangled briar of mathematical riffs and hypnotic battery on The Deal or through the unfettered eruptions and methodical dissonance of What One Becomes are aware that Sumac eschews the conventional balladry typically associated with odes to our spiritual connectedness. Saccharine sweetness or fatalistic tales of unrequited affection are nowhere to be found on third full-length album, Love In Shadow.

Thalia Zedek Band – Fighting Season CD/LP+MP3 (Thrill Jockey)
Thalia Zedek is an unparalleled voice in rock music. Her music straddles the line between intimate and visceral. Zedek has received wide acclaim for her intense vocal performances and guitar playing in past projects Come, Uzi, Live Skull, and most recently her new trio E with Gavin McCarthy (Karate) and Jason Sidney Sanford (Neptune). Since the dissolution of Come, Zedek has focused her solo efforts on more vulnerable, stripped back arrangements. Her new album Fighting Season combines the grit of her past with the fragility of her solo releases, spinning tales of discord and struggle from the personal to the political and featuring performances by old friends Chris Brokaw (Come) and J. Mascis (Dinosaur Jr.).

Death Grips – Year Of The Snitch LP (Harvest)
Recently released on CD – now available on vinyl. Year Of The Snitch is the sixth studio album by experimental the hip-hop group comprised of Stefan Burnett (aka MC Ride) and production team Zach Hill and Andy Morin. “In the process of trying to sabotage their career at every turn, Death Grips became career artists. Regardless of how you classify their prolific output thus far, the noise-rap art project has averaged one album per year, with enough variation and quality control to make their ‘will they or won’t they break up’ shtick background noise. They’re industrious, downright reliable, even. So, on their 10th release in seven years, Year Of The Snitch, Death Grips stay politically agnostic, persistently agitated—in a word, noided. It’s kinda quaint. Maybe even comforting.” – Pitchfork [Limited indie-only clear vinyl pressing also available.]

MC5 – Total Assault: 50th Anniversary Collection 3xLP (Atlantic)
The MC5 only released three albums, but they were ferocious, adventurous, and confrontational enough to secure the group’s place as one of the greatest rock ‘n’ roll bands ever. This year is the 50th anniversary of the recording of the band’s incendiary debut, Kick Out The Jams, which was recorded live over two nights at Detroit’s Grande Ballroom in October 1968. To celebrate, Total Assault: 50th Anniversary Collection collects all three of the band’s albums pressed on colored vinyl. Along with Kick Out The Jams, the set also includes Back In The USA (1970) and High Time (1971).

Pile – Odds And Ends LP (Exploding In Sound)
Never afraid to switch styles, Pile’s music has morphed over the years, embracing both the ferocious and gentle sides of punk, indie, folk, and noise rock, delivering their own brand of gnarled intensity.