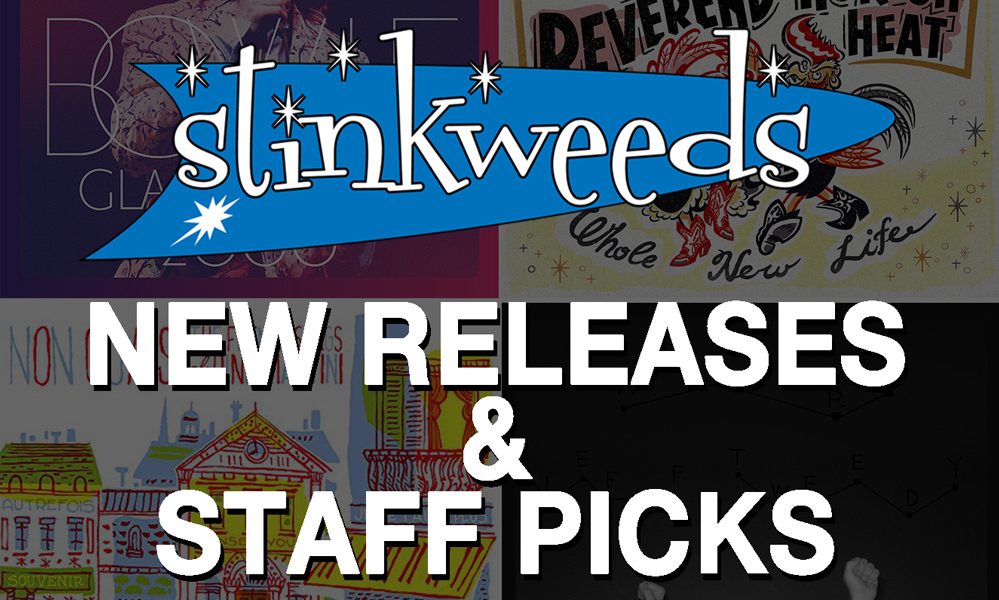 Reverend Horton Heat – Whole New Life CD/LP (Victory)
Jim Heath and longtime confidant and slap-bass general Jimbo Wallace have polished up their twelfth release, Whole New Life, which Heath calls “the most positive material I have ever written. It focuses heavily on rock and roll but there is a human interest parallel – songs about growing up poor, vices, marriage, having children and walking the rapturous streets of America.” Call it a new twist on an old sound, Whole New Life was recorded between Fun Guy Studios and Modern Electric in the band’s hometown of Dallas. The 11-track rumination features new drummer Arjuna ‘RJ’ Contreras. The Texas based jazz pupil came to the band’s attention from a friend’s reference in the summer of 2017 and brought a whole new backbeat to the legendary rockabilly administration. After clicking with Contreras, Heath hired a new pianist in 2018, Matt Jordan, to flesh out the sound with the pomp and power of Jerry Lee Lewis and Little Richard. “I love playing with these guys, it truly is a whole new band, so the title fits perfectly,” Heath adds. “Whole New Life brought out something in me where I am screaming more and making more throaty sounds. It’s got some Louisiana feel to it, a bit of gruff and some Roy Orbison style in it.”

Jeff Tweedy – Warm CD/LP (dBpm)
Jeff Tweedy presents, Warm, an 11-track solo album of all new material, recorded at Chicago’s now legendary studio, The Loft (with help from some of his usual collaborators – Spencer Tweedy, Glenn Kotche and Tom Schick). Warm follows the acoustic retrospective release, Together At Last (2017), and Wilco’s 2016 album, Schmilco. Tweedy describes lead single “Some Birds” as, “like a lot of songs on Warm, being a confrontation between self and shadow self simultaneously feeling I’m to blame and not to blame, present and gone, and utterly confused, but determined to hold someone accountable.” From the liner notes: “Warm’ is one of the most joyful, celebratory, infectious collections of songs I’ve heard in a long time. It’s intimate and yet vast and feels lovingly made, by actual people, in some particular place, and not inside a computer. Also in there, I think, is the spirit of Jeff’s father, Bob Tweedy, who passed away in 2017.” – George Saunders

Neil Young – Songs For Judy CD (WB)
Recorded during Neil Young’s fabled November 1976 solo acoustic tour of the US, the archival 23-track live collection Songs For Judy includes performances of all-time classics like “Heart Of Gold”, “After The Gold Rush” and “The Needle And The Damage Done”, along with a number of rarer selections, including one song, “No One Seems To Know”, that has not appeared on any previous official release. “Campaigner”, recorded on November 22nd, 1976 at Boston’s Music Hall, serves as the album’s first “single”. Curated by director Cameron Crowe and producer/photographer Joel Bernstein, both of whom contribute to the fascinating liner notes, Songs For Judy marks the debut release from Young’s Reprise Records imprint, Shakey Pictures Records. “The tour had been so satisfying, and so different from all that rock would become in the ensuing years, something indelible was captured in our humble collection,” explains Crowe. “Listening to it today is a little like discovering postcards from home. It was a precious time in Neil Young’s journey, a breath of oxygen in between some of his biggest adventures.”

The 1975 – A Brief Inquiry Into Online Relationships CD/2xLP (Dirty Hit)
Singer Matty Healy on the new 15-track record to NME: “Our first three albums are the story of a person; it’s always kind of been my story. It spanned adolescence to maturity, success and trying to mediate the two, and the third one is where we are now.” He ambitiously adds to Uproxx: “If you look at third albums, [Radiohead’s] OK Computer or [The Smiths’] The Queen Is Dead, that’s what we need to do. I want a legacy. I want people to look back and think our records were the most important pop records that a band put out in this decade.”

David Bowie – Glastonbury 2000 2xCD/2xCD+DVD/3xLP (Rhino)
This release documents Bowie’s legendary Sunday night headline performance on June 25th at the most famous festival on earth. The package includes the full 21 song greatest hits set and for the first time, a DVD of the entire show (only 30 minutes of which has ever been broadcast on TV) including the Glastonbury performance of “Heroes”, a highlight of the record-breaking David Bowie Is… exhibition and the only track that has been previously released.

Foxwarren – Foxwarren CD/LP (ANTI-)
Foxwarren’s backstory reads like a page torn from the manual of rock & roll authenticity. They are siblings and childhood friends who formed a band in college. They went on to live as roommates and recorded an album in the basement of a rented house. Even the band’s namesake comes from the brothers (Avery and Darryl) Kissick’s family home. The band’s self-titled debut is subtle and thoughtful, it draws parallels to frontman Andy Shauf’s solo work while leaning on collaboration and looseness rather than Shauf’s meticulous arrangements. Where Shauf leaves space for orchestration, Foxwarren take time to ruminate on passages and themes. Propped up by warm driving rhythms and a familiar voice, and colored with soft electronics and coarse guitars, Foxwarren is a record that ultimately hinges on sincerity.

Jaco Gardner – Somnium LP+MP3 (Polyvinyl)
Released last week on CD – now available on vinyl. Somnium is not necessarily representative of Jacco Gardner’s new Lisbon surroundings in an obvious sense but more a depiction and projection of his thoughts and dreams whilst spent walking the streets; which he did whilst thinking about the books he’d been reading and imagining those worlds put to sound. Jacco has been known to create swirling psychedelic pop boosted by his rich, resonate and baroque voice but on Somnium, his vocals are gone and in their place is an equally seamless melodic exploration but an instrumental one with a synthesized sci-fi edge.

The Roots – Undun [Reissue/2011] LP (Def Jam)
Despite being rap veterans at the time, The Roots maintained a sense of artistic urgency, crafting this conceptual album with a loose narrative that follows Undun’s imaginary protagonist, Redford Stevens, through a journey of imbalance, self-reflection, and triumph. Couched in an impoverished setting, it is an existential concept album entirely produced by Roots’ drummer Questlove featuring stellar guest features from Big K.R.I.T, Bilal, Phonte, and more, and vocals from the group’s formidable MC, Black Thought.