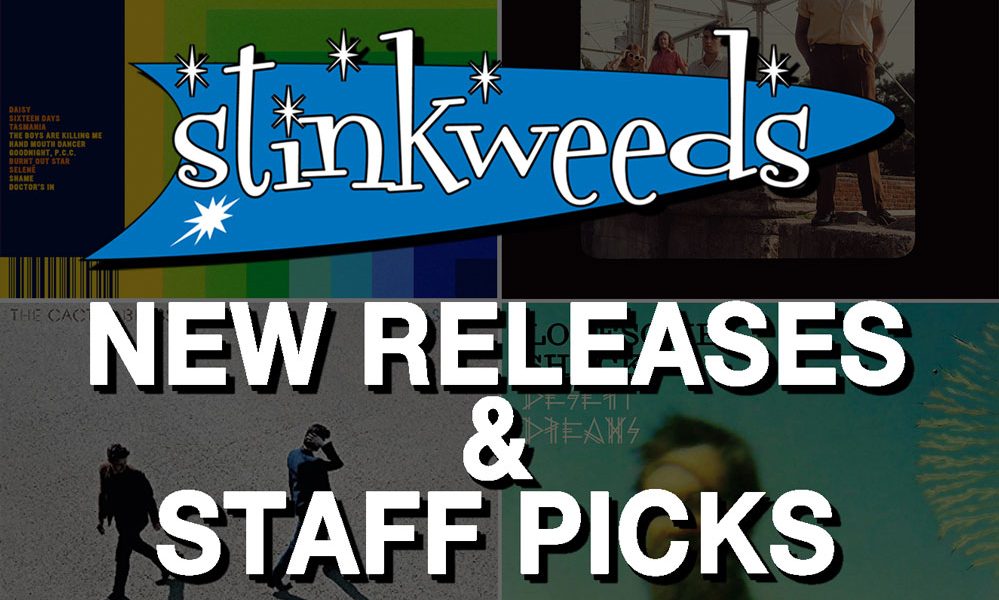 Lonesome Shack – Desert Dreams CD/LP (Alive)
With a sound that is raw, expressive, and strange, Lonesome Shack’s music is part hill country blues, part urban folk rock, and owes as much to Alan Wilson’s Canned Heat as it does to Junior Kimbrough. The trio is led by Ben Todd, a finger picking guitarist who has spent time living in a shack in the NM desert where he learned how to play old blues and banjo tunes from vintage recordings. Desert Dreams sounds like rock city meets backwoods boogie, desert blues meets jungle grooves.

Tom Petty and The Heartbreakers – The Best of Everything: The Definitive Career-Spanning Hits Collection 1976-2016 2xCD/4xLP (Geffen)
This collection of personal favorites and important milestones is the first anthology to span Petty’s entire career, from the first album to Mudcrutch 2. The album contains 38 tracks including the hits “Free Fallin’, American Girl, “You Don’t Know How It Feels”, You Wreck Me: and many more. The album also includes two unreleased tracks, “The Best of Everything (Alternate Version)” and the previously unreleased and unheard “For Real”.

L.A. Witch – Octubre CD/LP (Suicide Squeeze)
Octubre may be a record about unhealthy infatuations and debilitating love, but it’s also an inadvertent statement on the past and permanence. Originally offered to the world as a surprise digital release, it might suggest a kind of ephemera, but the underlying motive is to reinvent and bring a new life to these seminal songs from the band’s early years. Reimagined and reshaped, these songs not only represent the band’s beginnings but also serve as a teaser for the band’s future output.

Delicate Steve – Till I Burn Up CD/LP (ANTI-)
Some of the first people to recognize Delicate Steve’s (aka Steve Marion) unique musical talents were renowned artists such as David Byrne, Dirty Projectors, tUnE-yArDs, Mac DeMarco, Dr. Dog, and elder statesmen like Lee Ranaldo and Built to Spill. Steve is likely the only guitarist who has cut records with Sondre Lerche and Death Grip’s Zach Hill, been handpicked to open a sold out North American tour for Tame Impala and then provided guitar for a Paul Simon record. Now the acclaimed guitarist is back with his fifth solo studio album, Till I Burn Up. “On the (mostly) instrumental albums he’s released as Delicate Steve, Marion’s guitar playing is always in the spotlight, but never hogging it – rather, his luminous leads form the emotional undercurrent around which everything else flows. What makes Marion a guitar hero isn’t just his technical wizardry, but his music’s mission to help you through dark times.” – Pitchfork

Frankie and The Witch Fingers – ZAM CD/2xLP (Greenway)
Frankie and The Witch Fingers’ fifth LP, ZAM, bleeds beyond borders and boundaries. Its opening preternatural sounds bubble up out of the primordial soup, spilling into our world, invading the inner recesses of the listener’s mind. Like a two-headed snake wrapped around the skull, the album pendulates between winding instrumentals and dancey riffs that pop like supernovas out of the black void. Just when a song goes one way, it propels another through long stretches of a cosmic inferno. Basically, fans of King Gizzard and Ty Segall will eat this up!

Hand Habits – Placeholder CD/LP (Saddle Creek)
Meg Duffy grew up in a small town in Upstate New York and cut her teeth as a session guitarist and touring member of Kevin Morby’s band. The Hand Habits project emerged after Meg moved to Los Angeles; it started as a private songwriting outlet but soon evolved into a fully-fledged band with Meg at the helm. Hand Habits’ debut album, Wildly Idle was entirely self-produced and recorded in Meg’s home during spare moments when they weren’t touring. Wildly Idle is a lush, homespun collection of folk songs that found Meg in an exploratory state as an artist moving out on their own for the first time. Two years later, Hand Habits has returned with their sophomore album, Placeholder. To make this album, Meg chose to work in a studio and bring in collaborators, entrusting them with what had previously been a very personal creative process. Over the course of 12 tracks, Meg emerges with new confidence as both a bandleader and singer. This album is as tender and immediate as anything Meg’s ever written, but it’s also intensely focused and refined, the work of a meticulous musician ready to share their singular vision with the world.

Hozier – Wasteland, Baby! CD/2xLP+MP3 (Columbia)
Wasteland, Baby! is the sophomore album from Grammy-nominated Irish singer-songwriter Hozier. The 14-track collection is released on the heels of his September 2018 EP, Nina Cried Power whose title track is also included on Wasteland, Baby! and features vocals from Mavis Staples and instrumentation by Booker T. Jones. The track was highlighted as one of President Barack Obama’s favorite songs of 2018. “I think musically it’s a logical step forward from previous records” Hozier told NPR.

Yves Jarvis – The Same But Different Means CD/LP (ANTI-)
Yves Jarvis is a recasting of Montreal-based musician Jean-Sebastian Audet. Audet previously created under the name Un Blonde. Each aspect of Audet’s work is immensely personal, and Yves Jarvis reflects this literally. Yves is Audet’s middle name, while Jarvis is his mother’s last name. His music is idiosyncratic neither by design or by chance; it just is. It mutates and shifts, as he does, through cycles and phases. Yves Jarvis new record, The Same But By Different Means, is a new cycle. With it, Audet continues to create music that is at once warm, haunting, and unfamiliar while remaining singularly inviting and kind – a mélange that reflects both comfort and its counterpart.

Royal Trux – White Stuff CD/LP (Fat Possum)
Royal Trux’s first album of new songs since 2000’s Pound For Pound not only maintains the magic chemistry between Jennifer Herrema (vocal, Moog, guitar, melodica) and Neil Hagerty (vocal, guitar) but expands upon it greatly with their natural ability to give us something unexpected, necessary, and truly unique. Their own formidable and informed imaginations…the same two creative minds that brought us (to name a few) Twin Infinitives, Cats And Dogs and Accelerator, are present in the unadulterated, exhilarating energy that has the album listed on most highly anticipated albums of 2019 lists. Royal Trux find innovation in their Bitches Brew aesthetic which now defines the standard mash-up approach so commonly ascertained and claimed by the majority of musicians that whether cognizant or not have followed in Trux’s very large footsteps: “everything in the pot whether you like it or not,” deriving from world music, punk rock, jazz, metal, electronic, southern, teeny-bop and all the rest. In the tradition of the blues, through appropriation and re-evaluation, Royal Trux changed the way we think of music. Their return is nothing short of glorious.

Teen – Good Fruit CD/LP+MP3 (Carpark)
If Teen’s 2016 album Love Yes was a bursting, harmony-infused synthpop thesis on embracing love, then its follow-up, the even more joyous and melodic Good Fruit, is its opposite, a look at what happens after love fades. The Lieberson sisters – Teeny, Lizzie, and Katherine – have, with their fourth album, crafted a dynamic, hook-stuffed take on the oft-trodden breakup album; as on prior releases, there are frequent meditations on death, capitalism, and womanhood. While recording Good Fruit, the sisters employed a self-described “reductive approach,” strove to create space within their songs, and, for their first time, self-produced the album (save a few co-productions from Francis, who also played on some songs). These techniques explode the glistening, sprinting glamour of “Only Water”, a deceptively upbeat number about death and the loss of a loved one. They inform Good Fruit’s handful of ballads too, including “Pretend”, which rings with a vast, unsettling static fuzz even as Lizzie beautifully recounts the disappointment of realizing a partner wasn’t all she’d built them up to be.

Robert Forster – Inferno CD/LP (Tapete)
Inferno is the former Go-Betweens singer-songwriter and guitarist first solo album since 2015 and is only his second album over the last eleven years.

King Gizzard & The Lizard Wizard – Cyboogie b/w Acarine 7” (ATO)
King Gizzard & The Lizard Wizard return with their first new music since 2017. “Cyboogie” is a step in a new direction for Gizz with five of the seven members playing synth on the track and not a guitar in sight. It’s an incredibly fun, upbeat disco boogie track reminiscent of Stevie Wonder, Devo, Trans era Neil Young and everything that is good.

Smoke DZA x Pete Rock ‎– Don’t Smoke Rock [Reissue/2016] 2xLP (Babygrande)
Red colored vinyl reissue. With an illustrious career spanning three decades, producer Pete Rock can freely decide who he wants to work with. Having already produced for the likes of Jay Z, Kanye West, Nas, Common, Cypress Hill, Method Man, Redman, and Jim Jones, just to name a few, Pete Rock has undoubtedly solidified himself as a contender for ‘the greatest producer of all-time.’ When Harlem’s rising star Smoke DZA landed on Pete’s radar, he knew DZA had something special that could not be ignored.