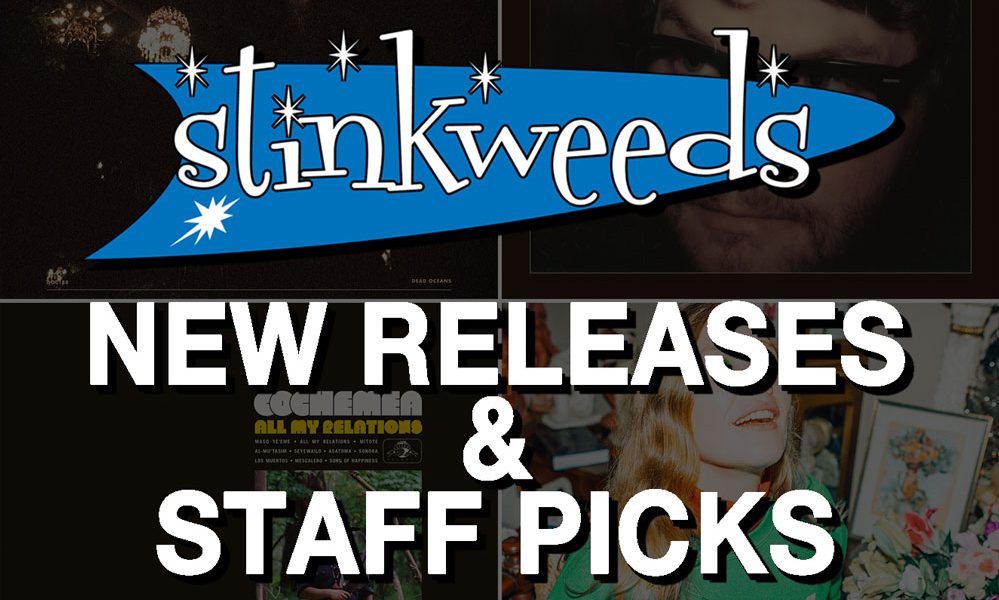 The Claypool Lennon Delirium – South Of Reality CD/2xLP+MP3 (ATO)
South Of Reality, The Claypool Lennon Delirium’s epic sophomore album might be just the antidote this sick world needs. Music so potent it could repel an asteroid impact from space, these seasoned warriors of psychedelia have crafted timeless songs that may as well be chiseled in stone. The monolithic dream team’s new record was produced by Les Claypool and Sean Lennon themselves, and engineered and mixed by Claypool at his own Rancho Relaxo studio in Sonoma County, California. Claypool and Lennon told Rolling Stone that South Of Reality “feels like an organic extension of Monolith Of Phobos, blending the wildly surreal and psychedelic with satirical social commentary.” Additionally, Rolling Stone called new track “Blood And Rockets”, “a sprawling epic that finds Lennon and Claypool crooning and snarling, respectively, over spacey synths and chiming guitars.”

Martin Frawley – Undone At 31 CD/LP+MP3 (Merge)
Whether one seeks it out or it simply presents itself, change is an inevitability. Should one embrace it? Grapple with it? Fight it? These are the questions Martin Frawley unpacks as he steps into the spotlight for Undone At 31, his first album as a solo artist and the start of a new chapter for the Melbourne songwriter. Those familiar with Frawley’s time as co-leader of Twerps will take comfort in hearing his deceptively simple songwriting is still intact, but the big reveal on Undone At 31 is how new instrumentation and influences seamlessly expand his playground. It might take several listens for one to realize Frawley is singing “Something About Me” over just violin, Moog, and a Graceland-esque bassline, or to appreciate the PB+J pairing of Fender Rhodes and lap steel on “Where The Heart Is”, which serves as the album’s twist ending.

Lily & Madeleine – Canterbury Girls CD/LP (New West)
Lily & Madeleine Jurkiewicz create candid music with deep emotional and personal resonance. The sisters, who record under the moniker Lily & Madeleine, boldly explore what it means to be women in the 21st century and aren’t afraid to use their music to call out injustice or double standards. This fearless approach has permeated their three albums, which are full of insightful lyrics and thoughtful indie-pop. But with their fourth studio album, Canterbury Girls – named after Canterbury Park, located in their hometown of Indianapolis – the sisters are coming into their own as women and musicians as the explore new sonic vistas. “Supernatural Sadness” is an irresistible slice of bubbly, easy-going disco-pop; the urgent “Pachinko Song” hews toward interstellar synth-pop with driving rhythms, and “Can’t Help The Way I Feel” is an effervescent, Motown-inflected number. Vocally, the sisters also take giant leaps forward. The dreamy waltz “Self Care” is a rich, piano-heavy track on which their voices intertwine for soulful harmonies, while the meticulous “Just Do It” has a throwback, ‘70s R&B vibe.

Telekinesis – Effluxion CD/LP+MP3 (Merge)
The fifth full-length album Michael Benjamin Lerner has recorded as Telekinesis is perfect, unfussy power pop – romantic and hopeful and skittish and fresh and familiar, with hooks in all the right places. Its title, Effluxion, comes from the Latin term meaning “to flow” and captures the spirit in which the album was made: hooks flow in, hooks flow out. Effluxion is, in the purest way, a back-to-basics album – not just in its reaffirmation of the sound and style that made Lerner an indie wunderkind a decade ago, but in the way it was created. Using the same now-discontinued MacBook microphone he used to record his earliest tracks, he holed up in the basement of his West Seattle home and put the album together piece by piece over the past two years, playing every instrument.

And The Kids – When This Life Is Over CD/LP+MP3 (Signature Sounds)
Praised by NPR for “striking vocals [that] rival the vibrato and boldness of Siouxsie Sioux… and music that’s both fearless and entertaining,” And The Kids return with a bold continuation of their chunky indie rock meets blissful new wave sound, while finding inspiration in exploring the total freedom of mortality’s fate.

Feels – Post Earth CD/LP+MP3 (Wichita)
Post Earth follows Feels’ Ty Segall-produced 2016 eponymous debut which earned the band wide acclaim. Produced by Tim Green (the former guitarist of punk iconoclasts Nation of Ulysses, who has worked with Sleater-Kinney, Bikini Kill, Joanna Newsom, and Jawbreaker), Post Earth is a call to arms, interspersed with frustration and hope, and strikes a perfect balance musically between noise and energy, breath and space with a mix of angular, interweaving guitars, lush vocal harmonies, heavy bass and pummeling drums – at times hearty and loud, and at others stunningly harmonic and calm.

Julia Jacklin – Crushing CD/LP+MP3 (Polyvinyl)
The second full-length album from the Australian singer/songwriter album was formed from sheer intensity of feeling, an in-the-moment narrative of heartbreak and infatuation. And with her storytelling centered on bodies and crossed boundaries and smothering closeness, Crushing reveals how our physical experience of the world shapes and sometimes distorts our inner lives.

Julian Lage – Love Hurts CD/LP (Mack Avenue)
Hailed as one of the most prodigious guitarists of his generation, Julian Lage has spent more than a decade searching through the myriad strains of American musical history via impeccable technique, free association and a spirit of infinite possibility. Though only 31, the New York-based musician boasts a long, prolific résumé as sideman (alongside such icons as Gary Burton and John Zorn), duo partner (with Nels Cline, Chris Eldridge and Fred Hersch), and as soloist and bandleader.

Murray A Lightburn – Hear Me Out (Dangerbird)
Murray A Lightburn, singer of The Dears, delivers his second solo album Hear Me Out. A Lush, romantic strings-and-soul record, unabashedly inspired by ’50s crooners, ’60s girl groups, Muscle Shoals, and Motown.

Modeselektor – Who Else CD/LP (Monkeytown)
Modeselektor returns with their first new album since 2011. Who Else offers next level production and as always a properly varied sequence of grime, techno, hip-hop and other styles. It is the sound of the duo rambling, raving, and experimenting.

R. Stevie Moore – Afterlife CD/LP (Bar/None)
R. Stevie Moore is a pioneer of home recording, a do-it-yourself musical aesthetic that took root and blossomed in the 1970s. RSM was an early adopter – since 1968 he’s cranked out hundreds of album-length recordings as a growing cult discovered him over the decades. He’s a pop craftsman who never feared cheap technology. Afterlife is RSM’s A-game collection. Some recent songs, some reimagined nuggets, all polished to pop perfection.

Our Native Daughters – Songs Of Our Native Daughters CD (Smithsonian Folkways)
Songs of Our Native Daughters gathers together kindred musicians Rhiannon Giddens, Amythyst Kiah, Leyla McCalla, and Allison Russell in song and sisterhood to communicate with their forebears. Drawing on and reclaiming early minstrelsy and banjo music, these musicians reclaim, recast, and spotlight the often unheard and untold history of their ancestors, whose stories remain vital and alive today.

Sleaford Mods – Eton Alive CD/LP (Extreme Eating)
Sleaford Mods are one of the most important, politically charged and thought-provoking duos currently making their mark on the UK music scene and beyond.

Fruit Bats & Vetiver – In Real Life (Live At Spacebomb Studios) LP (Spacebomb)
Eric D. Johnson and Andy Cabic have a lot in common. Two kindred spirits with a common affinity for songwriting that embraces a range of feeling, strong on melodies paired with thoughtful lyrics and catchy hooks. Over the years, they’ve played in each other’s bands (Fruit Bats and Vetiver), on one another’s albums, scored films together, and toured the world with one another. In Real Life documents their musical relationship and recent duo touring as part of the ongoing Live At Spacebomb series.

X – Los Angeles [Reissue/1980] LP (Fat Possum)
Four decades after their inception, one thing is clear: X was not only one of the most influential bands to crash out of the punk movement of the late ’70s, but the group’s music continues to be sonically groundbreaking today.