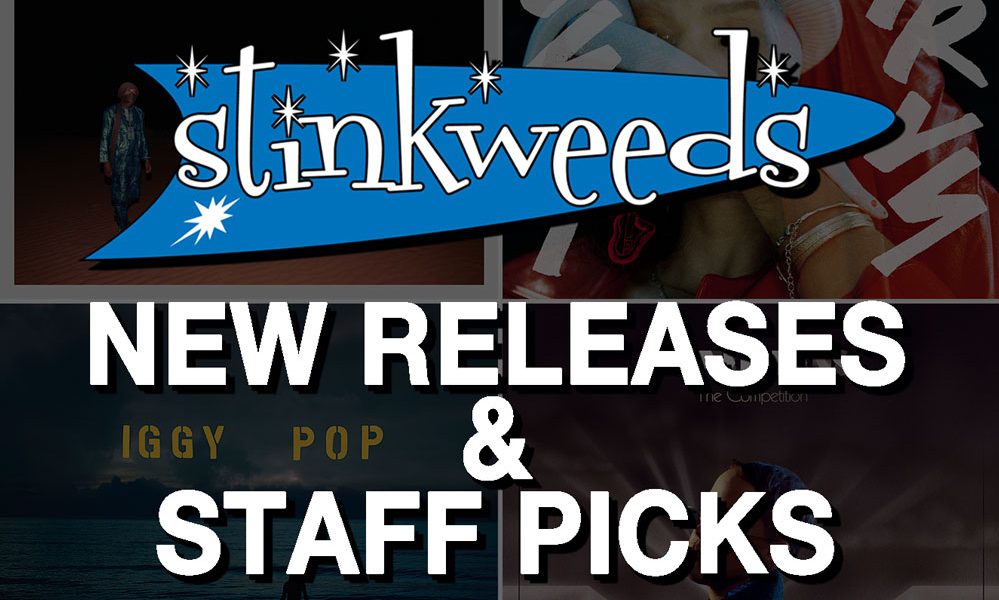 Tinariwen – Amadjar CD/2xLP (ANTI-)
“Amadjar” means “the unknown visitor” in the language of Tamashek, the one who seeks hospitality and who’s condemned to an inner exile, within a territory or within himself. The story of Amadjar, the ninth Tinariwen album, was recorded in a natural setting. Bassist Eyadou plays a lot of acoustic guitar; percussionist Said tries his hand at new instruments; Abdallah exhumes songs that he’s never played on stage with Tinariwen. And that violin that appears on several songs and reminds you of the traditional imzad – it’s played by Warren Ellis, the violinist in Nick Cave’s band and one of several western guests on the album. We also hear the mandolin and charango of Micah Nelson (son of the country music giant Willie Nelson, and Neil Young’s guitarist), and the guitars of Stephen O’Malley (Sunn O)))), Cass McCombs and Rodolphe Burger.

Bat For Lashes – Lost Girls CD/LP (Bat For Lashes)
Lost Girls is another brilliant full-length in Natasha Khan’s incredible, acclaimed discography, mixing sounds she’s always loved – heavy bass lines, synth arpeggios, Iranian pop beats, cascading choruses – with some of her finest songwriting to date. It’s an album full of romance, a homage to Los Angeles where the album was recorded, to being a kid in the ‘80s, to films that touched and changed her life. Spanning 10 tracks, Lost Girls sees Khan dreaming up her own fully formed parallel universe, creating an off-kilter coming of age film in which gangs of marauding female bikers roam our streets, teenagers make out on car hoods and a powerful female energy casts spells and leave clues for us to follow. The women of Lost Girls are parallel to one of Khan’s previous female protagonists, the tough, darkness-driven Pearl, from her 2009 lauded album Two Suns. Within the women of Lost Girls and the character Nikki Pink, Khan unfolds elements of herself; within these songs, we do the same. [Limited indie store exclusive vinyl pressing also available.]

Frankie Cosmos – Close It Quietly CD/LP+MP3 (Sub Pop)
Close It Quietly takes the trademark Frankie Cosmos micro-universe and upends it, spilling outwards into a swirl of references that’s a marked departure from earlier releases, imagining and re-imagining motifs and sounds throughout the album. The band’s fourth studio release is a manifestation of their collaborative spirit: Greta Kline and longtime bandmates Lauren Martin (synth), Luke Pyenson (drums), and Alex Bailey (bass) luxuriated in studio time with Gabe Wax, who engineered and co-produced the record with the band. Recording close to home – at Brooklyn’s Figure 8 Studios – grounded the band, and their process was enriched by working closely with Wax, whose intuition and attention to detail made the familiar unfamiliar and allowed the band to reshape their own contexts.

Lower Dens – The Competition CD/LP (Domino)
The Competition, the fourth album from Lower Dens, is a pop album with a concept both emotionally and politically urgent. The title is lead singer/songwriter Jana Hunter’s term for a socio-psychological phenomenon that, in different ways, binds us all. Modern capitalism by nature generates a psychosis that accelerates our insecurities and anxieties to the point of total overload, corroding our intimacies, our communities, and our senses of self. The album draws on influences ranging across decades of Western pop music and chronicles messy, vulnerable humanity at a time of upheaval and chaos – through immersive, four-minute songs meant to give pleasure as much as provoke self-examination. It channels an urgent, restless desire to connect. [Limited clear vinyl pressing also available.]

Iggy Pop – Free CD/LP (Concord/Loma Vista)
While it follows the highest charting album of his career (2016’s Post Pop Depression), Free has virtually nothing in common sonically with its predecessor – or with any other Iggy Pop album. On the process that led him and principal players Leron Thomas and Noveller to create this uniquely somber and contemplative entry in the Iggy Pop canon, Iggy says: “This is an album in which other artists speak for me, but I lend my voice. By the end of the tours following Post Pop Depression, I felt sure that I had rid myself of the problem of chronic insecurity that had dogged my life and career for too long. But I also felt drained. And I felt like I wanted to put on shades, turn my back, and walk away. I wanted to be free. I know that’s an illusion, and that freedom is only something you feel, but I have lived my life thus far in the belief that that feeling is all that is worth pursuing; all that you need – not happiness or love necessarily, but the feeling of being free. So this album just kind of happened to me, and I let it happen.”

The Highwomen – The Highwomen CD (New Elektra)
The Highwomen is a new, highly anticipated, collaborative movement formed by Brandi Carlie, Natalie Hemby, Maren Morris and Amanda Shires. “Anyone can be a Highwoman,” Belinda Carlile notes. “Its about banding together, abandoning as much ego as humanly possible, holding one another up and amplifying other women every chance we get. Shoulder to shoulder.  One push, one love.” Continually demonstrating the importance of inclusion and collaboration, The Highwomen are joined by several guest musicians, vocalists and songwriters across their eponymous album. The project features Sheryl Crow (background vocals, bass), Yola (vocals, background vocals), Dave Cobb (acoustic/electric guitar), Jason Isbell (acoustic/electric guitar), Phil Hanseroth (bass, background vocals), Tim Hanseroth (guitar, background vocals), Chris Powell (drums) and Peter Levin (piano and keyboards) with songs written by Carlile, Hemby, Morris, Shires, Isbell, the Hanseroth twins, Rodney Clawson, Lori McKenna, Miranda Lambert and Ray LaMontagne among many others.

Melanie Martinez – K-12 CD/LP (Atlantic)
K-12 marks singer Melanie Martinez’s long anticipated follow-up to her RIAA platinum certified, 2015 debut album, Cry Baby. Produced by Michael Keenan with the exception of one song produced by Kinetics & One Love (who previously collaborated with Martinez on such hits as “Dollhouse” and “Carousel”), the album serves as a soundtrack companion to an eerily enchanting new musical film, written, directed, and starring Martinez. Shot on location in Budapest, Hungary, K-12 sees Martinez starring as Cry Baby, a strong and sensitive girl who is sent off to a disturbing sleepaway school hidden underneath a grandiose façade.

Miles Davis – Rubberband CD/2xLP (WB)
Miles Davis shocked the music world in 1985 when he left Columbia Records after 30 years to join Warner Bros. Records. In October of that year, he began recording the album Rubberband in Los Angeles at Ameraycan Studios with producers Randy Hall and Zane Giles. The musical direction Davis was taking during the sessions marked a radical departure, with the inclusion of funk and soul grooves; with plans to feature guest vocalists Al Jarreau and Chaka Khan. Eventually, the album was shelved and Davis went on to record Tutu, leaving the Rubberband songs unheard and untouched for over 30 years. It was finished by the original producers Hall and Giles; with Davis’ nephew, Vince Wilburn, Jr., who played drums on the original sessions for the album in 1985-86.

Death Cab For Cutie – The Blue EP CDEP/12”+MP3 (Atlantic)
New EP release from the eight-times Grammy Award-nominated alt rock band. Along with all new tracks “Kids In ’99” and “Blue Bloods” – produced by Peter Katis (The National, Interpol, Kurt Vile) – the EP also includes “To The Ground” and “Before The Bombs”, produced by Rich Costey during the recording sessions for the band’s critically acclaimed ninth studio album, Thank You For Today and held for this planned subsequent EP. The fifth track on the project, “Man In Blue”, was self-produced by the band itself. [Limited blue colored vinyl pressing also available.]

Adam Green – Engine Of Paradise CD/LP (30th Century Records)
Adam Green is an artistic polymath – a songwriter, filmmaker, visual artist, and poet. As part of New York’s downtown anti-folk scene at the end of the nineties, Green made up one half of The Moldy Peaches, who later enjoyed mainstream success via the 2007 Grammy-winning Juno soundtrack. As a solo artist, Green has recorded 10 albums, many of which have become cult hits.

Paul & The Tall Trees – So Long CD/LP (Big Crown)
Paul Schalda is a poet, perhaps a bit of a tortured soul, a hopeless romantic, and a guy from Staten Island. That last bit might not make sense to people who aren’t from New York. His music seems to embody the unexpected overlap of The Band’s Americana, Ian MacKaye’s unhinged emotion, Otis Redding’s raw soul, and the doo-wop melodies his father, Bill Schalda Sr. (a member of Brooklyn vocal group, The Montereys). [Limited colored vinyl pressing also available.]

Sandro Perri – Soft Landing CD/LP (Constellation)
While Perri is rightly celebrated as one of the most singular producers in contemporary music (Boomkat) for his widely varied electronic work, his foundations as a guitarist have always anchored his ‘solo’ albums in one form or another. On Soft Landing, Perri’s guitar playing is at the smoothly, expressively rambling heart of these tunes – while his recording and mixing acumen as a (self) producer is also on brilliant display.

Throbbing Gristle – D.o.A.: The Third And Final Report Of Throbbing Gristle [Reissue/1978] 2xCD/LP+MP3 (Mute)
Throbbing Gristle ‎– Greatest Hits – Entertainment Through Pain [Reissue/1981] 2xCD/LP (Mute)
Expanded double-CD reissues (colored vinyl editions include the bonus tracks via download). Throbbing Gristle’s innovative working methods are deeply ingrained in the collective consciousness of… everything. The band’s subversive dismantling of systems of social control impacted culture well beyond their time. One of the most politically and sonically antagonistic bands of all time, Throbbing Gristle has left an impact on music, culture and the arts that is immeasurable and still felt today.

Various Artists – Blue Note Records: Beyond The Notes DVD/Blu-ray (Eagle Rock Entertainment)
Beyond the Notes is a revelatory journey behind the scenes of one of the most important labels in the history of jazz – and by extension, that of American Music – Blue Note has been home to groundbreaking legends as well as present-day luminaries. Founded in New York in 1939 by German Jewish refugees, the history of the label goes beyond the landmark recordings, encompassing the pursuit of musical freedom, the conflict between art and commerce and the idea of music as a transformative and revolutionary force. The Swiss filmmaker Sophie Huber gained her filmmaking experience as a member of an award-winning Berlin film collective, for which she co-directed several films before directing her debut feature documentary, the critically acclaimed Harry Dean Stanton: Partly Fiction, which premiered at the Venice Film Festival in 2012. Blue Note Records: Beyond The Notes is Sophie’s second documentary.

Guster – Keep It Together [Reissue/2003] LP (Nettwerk)
Guster is a band whose signature wit, matchless charm and dynamic style continues to chart new sonic and lyrical pathways with each album. 2003’s Keep It Together saw the band return on a new label with prime production courtesy of Ron Aniello (Lifehouse), Roger Moutenot (Yo La Tengo, Sleater Kinney) and David Henry.

LCD Soundsystem – Yeah [Reissue/2003] 12” (DFA)
Vinyl reissue of the second 12” from LCD Soundsystem, packaged in the original artwork from the 2003 UK edition.