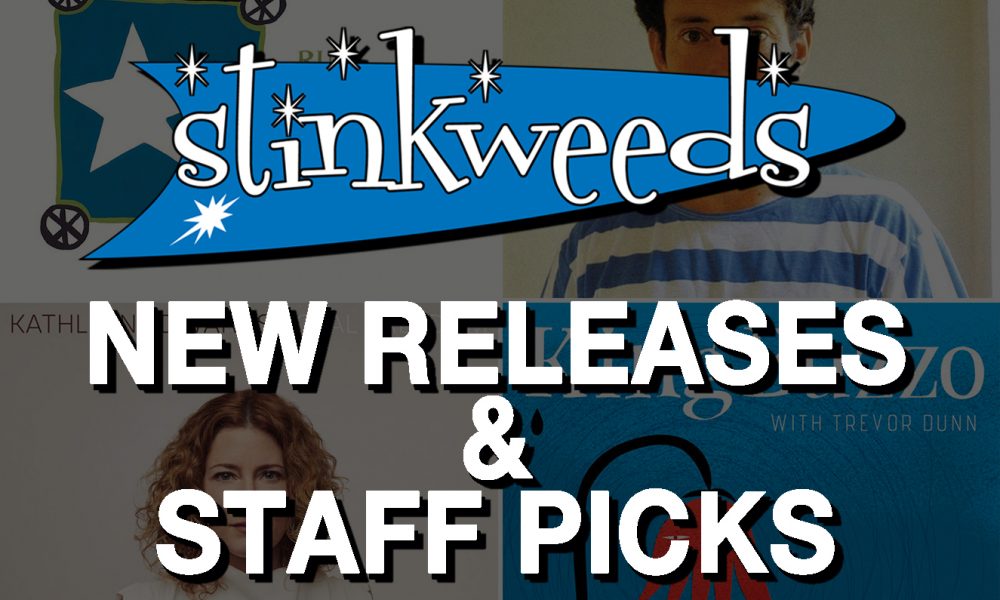 King Buzzo – Gift Of Sacrifice CD/LP (Ipecac)
Gift Of Sacrifice is the second solo acoustic album from legendary grunge progenitor King Buzzo aka Buzz Osborne, frontman for the legendary Melvins. Buzz is accompanied throughout the record by Trevor Dunn (Mr. Bungle, Fantomas) who is credited on the album cover. A different kind of animal, Gift Of Sacrifice follow’s up Buzz’s last solo album, 2014’s This Machine Kills Artists.

Kathleen Edwards – Total Freedom CD/LP (Dualtone Music Group)
Edwards makes her long-anticipated return to music with her fifth studio album, Total Freedom. Written and recorded in Canada and Nashville with longtime collaborator/guitarist, Jim Bryson, and Grammy-winning songwriter/producer, Ian Fitchuk, Total Freedom is both a return to form and a “hard reset,” one that empowered Edwards to write and perform entirely on her terms. For inspiration, she turned to Bob Seger, who’s “Against The Wind” struck a chord with her: “The song just reveals itself in such an effortless way. I was like, ‘That’s how I want to feel on these songs being written: that’s how I want it to feel when I play it start to finish.'”

Bill Frisell – Valentine CD/2xLP (Blue Note)
The debut recording of guitarist Bill Frisell’s trio with bassist Thomas Morgan and drummer Rudy Royston is a wide-ranging 13-song set that mixes Frisell originals new & old, jazz standards, traditional songs, and covers. Valentine explores the creative freedom of the trio format and the profound musical relationship between these three musicians after years of touring.
The Knife – Shaking the Habitual: Live At Terminal 5 CD+DVD (BFD)
Shaking the Habitual: Live at Terminal 5 was filmed at the titular New York City venue. The film is, finally, a fitting end to The Knife’s long career, and with its dancers, costumes, and intricate stage set-ups, it celebrates all of the eccentricity that made them so great. May their legacy rest in power, and also in spandex.
Primitive Man – Immersion CD/LP (Relapse)
True to Primitive Man’s ethos, every moment on their extreme, terrifying and confrontational new album Immersion is overwhelming; from the sonic pummeling on the album opener “The Lifer” to the brooding, unnerving guitars whirring throughout “Entity,” Immersion builds and builds. The tension throughout the record is palpable – hair raising tracks such as “Menacing” push and pull constantly, shifting from passages of harsh doom to an endless corridor of horrid screaming, blast beats, and a formidable low end.
Goldfrapp ‎– Supernature [Reissue/2005] LP (Mute)
Limited translucent green colored vinyl pressing. Described by The Guardian as “a brash, beautiful celebration of love and dancing” whilst Rolling Stone declared Supernature “toxic and delicious and will make you do bad things – and like it.”
King Gizzard & The Lizard Wizard feat. Mild High Club – Sketches Of Brunswick East [Reissue/2017] LP (ATO)
Limited yellow and blue colored vinyl LP pressing of the eleventh studio album by Australian psychedelic rock band King Gizzard & The Lizard Wizard, and the third by Mild High Club. The title is a reference to the Melbourne suburb of Brunswick East and Miles Davis’ 1960 LP Sketches Of Spain, which inspired the album’s jazz-oriented sound. The album is a collaboration with Mild High Club, and is prominently jazz-based. It was nominated for Best Jazz Album at the ARIA Music Awards of 2017.
Ramones ‎– It’s Alive [Reissue/1979] 2xLP (Rhino)
2019 remaster on double vinyl. This Ramones 1977 New Year’s Eve show from the Rainbow Theatre in London draws material from the band’s first three studio albums, Ramones (1976), Leave Home (1977), and Rocket To Russia (1977). It is the last album to feature all four original band members: Dee Dee Ramone, Joey Ramone, Johnny Ramone, and Tommy Ramone. Originally released in 1979.

Jonathan Richman – I, Jonathan [Reissue/1992] LP (Craft Recordings)
As a founding member of the influential proto-punk band The Modern Lovers, Richman built a reputation for conveying authentic emotions and storytelling with his music. Stepping out as a solo artist in the ‘80s, he  continued this aesthetic with simple and sparse rock and roll arrangements, and straightforward lyrics about mundane topics. 1992’s I, Jonathan includes the fan favorites “I Was Dancing In The Lesbian Bar”, “That Summer Feeling”, and “Parties in the U.S.A.”.

Biffy Clyro – A Celebration Of Endings CD (WB)
“This is a very forward-looking album from a personal perspective and a societal perspective,” explains frontman Simon Neil. “The title is about seeing the joy in things changing, rather than the sadness. Change means progression and evolution. You can retain everything you loved before, but let’s lose the bad shit. It’s about trying to take back control.” Sonically, Biffy Clyro playfully push the outer reaches of their sound to the extreme – often in the case of the same song.

Fantastic Negrito – Have You Lost Your Mind Yet CD (Cooking Vinyl)
After winning his second Contemporary Blues Album Grammy for the acclaimed Please Don’t Be Dead, Fantastic Negrito is back with his new album Have You Lost Your Mind Yet? This record focuses on mental health, while providing commentary on the political and social state of America. Lead track “I’m So Happy I Cry” features fellow Tiny Desk winner, Tank, from Tank and The Bangas. Additional focus tracks include “Chocolate Samurai”, “Searching For Captain Save A Hoe (featuring E-40)” and “How Long?” which see him exploring hip-hop, R&B, and rock in a way like never before, providing a glimpse into the full versatility of Fantastic Negrito as an artist.

Bruce Hornsby – Non-Secure Connection CD (Zappo Productions)
Bruce Hornsby is on a roll. After taking the music world by surprise with his wide-ranging, critically acclaimed 2019 album Absolute Zero, the singer, songwriter, composer and bandleader returns with a follow-up that picks up where its predecessor left off. Non-Secure Connection features 10 new songs exploring a broad range of themes, from civil rights to computer hackers, mall salesmen to the tribulations of youth basketball. Hornsby plays piano, of course, but the songs on Non-Secure Connection also feature Hornsby’s electric sitar and Chamberlin, along with guitars, horns, strings and subtle samples from sources as varied as minimalist composer John Cage and Scottish rockers Franz Ferdinand. Like Absolute Zero, Non-Secure Connection also features a wealth of collaborators: singer James Mercer of The Shins and Broken Bells, singer and poet Jamila Woods, Living Colour guitarist Vernon Reid, Bon Iver leader Justin Vernon and the late Leon Russell, who appears thanks to a demo that he and Hornsby recorded together more than 25 years ago.

Rumer – Nashville Tears CD (Cooking Vinyl)
Southern American folklore tells of song-catchers: individuals who possess a spiritual, almost supernatural, connection to the music of a culture. They gather important songs and preserve them, providing voices to give them life and ensuring they’re remembered. Rumer is such a song-catcher. On Nashville Tears, Rumer immerses herself in the catalog of Hugh Prestwood, a songwriter whose name is spoken with reverence by his colleagues. An album to savor, Nashville Tears collects 15 of Prestwood’s finest songs, many never recorded until now, revealing truths of the heart, both intimate and universal, realistic and romantic. The record is launched with the folk-rich melody “Bristlecone Pine”, a tale of becoming immortalized in death by being buried the feet of neglected but steadfast tree as old as history itself. “This is one of my favorite songs from the album,” Rumer notes. “I love the atmosphere and the imagery, and the musicians who played on the song brought so much talent and energy to it. I love songs about the natural world and I love that this is a song about a tree.”