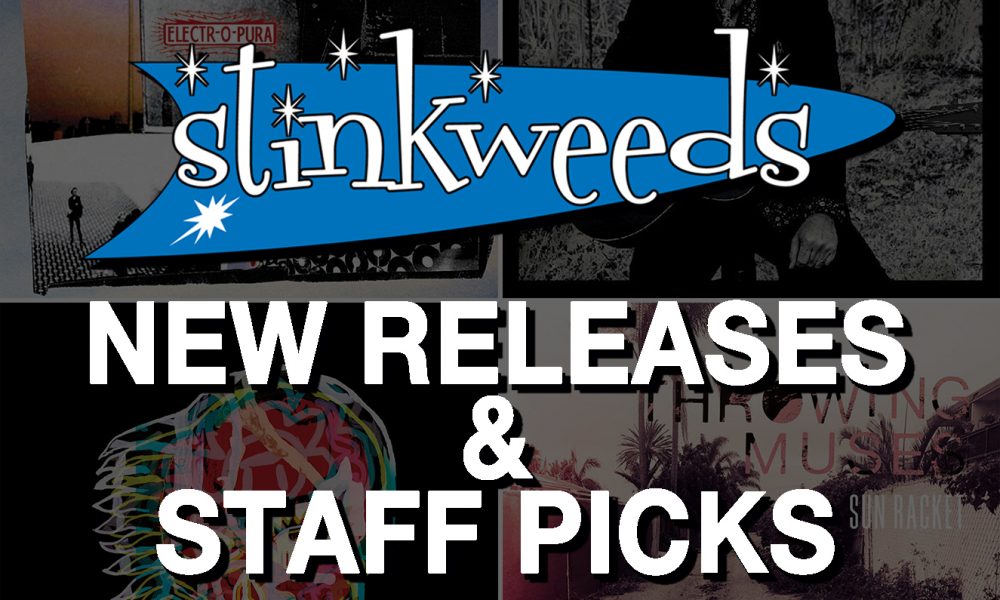 All Them Witches – Nothing As The Ideal CD/LP (New West)
All Them Witches have built a career out of playing music that cannot be pigeonholed into one specific genre. Nothing As The Ideal was recorded in Studio 2 at the world famous Abbey Road with the help of longtime mixing engineer Mikey Allred. The history and vibe of that setting laid the groundwork for what was to come. The band’s signature psychedelic blues riffs, relentless drums, melodic bass lines and non-linear lyrics are all present. The resulting album is a thought provoking head banger that is the band’s most cohesive album to date. [Limited edition picture disc vinyl pressing also available.]

Grant-Lee Phillips – Lightning, Show Us Your Stuff CD/LP+7”+MP3 (Yep Roc)
Lightning, Show Us Your Stuff is a turbulent and highly musical rumination that finds the veteran singer-songwriter addressing the strange fragility of life. His tenth solo release bears the markings of his prolific output, a melodic prowess and an ear for lyric in everyday conversation. The album offers a salve to a wounded world, struggling to regain equilibrium. This is GLP at his most reflective, wrestling with the most pertinent of questions.

Thor & Friends – 3 CD/LP (Joyful Noise)
Thor & Friends – 4 CD/LP (Joyful Noise)
Polymath percussionist Thor Harris inaugurated Thor & Friends in the autumn of 2015 after five years of touring as the percussionist of iconic avant-rock ensemble Swans. The project is intended as a vehicle for experimentation with the conceptual vocabulary of American Minimalism collaborating with a rotating cast of Austin based musicians. The ensemble has three core members, Thor Harris, Peggy Ghorbani and Sarah Goat Gautier – with its line-up expanding and contracting with the flux of compositional and improvisational contexts. Thor & Friends draws on classic Minimalist composers, including Terry Riley and Steve Reich, but also amalgamate such diverse influences as Brian Eno, Aphex Twin, Moondog and The Necks around a polyrhythmic core of mallet-struck instruments, primarily marimba, xylophone and vibraphone.

Aesop Rock – Float [Reissue/2000] 2xLP (Rhymesayers)
Available in three different, limited edition colorways. In 2000, Aesop Rock released his first official album, Float, following his steady ascent in the underground from two previous releases, the collection of works CD of lore, Music For Earthworms (1997), and the Appleseed EP (1999). And, while every album Aesop has done since then has captured his continual evolution as both a producer and a writer, Float was undeniably exceptional in its own right.

Jack Johnson ‎– Brushfire Fairytales [Reissue/2000] LP+HDCD (Everloving)
Remastered by Bernie Grundman from the original analog tapes, this is a true AAA edition pressed at RTI on HQ Vinyl 180g for unsurpassed quality and long life. A must for audiophiles and beach bums alike.

Rex Orange County – Bcos U Will Never B Free [Reissue/2015] 2xLP (Rex Orange County)
Vinyl reissue of the debut album by singer-songwriter and multi-instrumentalist Rex Orange County. Written and recorded in his bedroom at the age of 16, it caught a wave of interest when it was self-released digitally in 2015. Its lo-fi textures and hi-def emotions led to a hook up with Tyler, The Creator who asked the teenager born Alex O’Connor to come to Los Angeles, where he wrote and sang on two tracks on the album that became Flower Boy.

Yo La Tengo – Electr-O-Pura [Reissue/1995] 2xLP+MP3 (Matador)
For Electr-O-Pura’s 25th anniversary, the 58 minute master has been expanded into a 2xLP edition for the highest quality audio. Now in a gatefold sleeve. Reuniting with Painful producer and engineer Roger Moutenot, Yo La Tengo’s Ira Kaplan, Georgia Hubley and James McNew set up shop at Alex the Great studios in Nashville, TN to record their seventh studio album Electr-O-Pura. Chock full with moments of pop gold like “Tom Courtenay”, melancholic ballads such as the gorgeous, Hubley-fronted “Don’t Say A Word (Hot Chicken #2)”, and sweeping, feedback-laden jams like the show-stopping “Blue Line Swinger”, Electr-O-Pura expands on the venturous songwriting established on Painful with stunning craft and a deepened exploration of contrasting textures, moods and atmospherics.

Josiah Johnson – Every Feeling On A Loop CD/2xLP (ANTI-)
Josiah Johnson – a former and founding member of The Head And The Heart – releases his debut solo album Every Feeling On A Loop. On lead single “Nobody Knows”, Johnson sings for people to have courage in sharing and receiving the truths of their hearts. The messages, like the man himself, are a welcome breath of air. “A lot of the growth documented on this album is about taking responsibility for how I’m showing up in the world, and that song was about taking responsibility for how I care for myself,” Johnson says. “Part of my experience with addiction was that I was having a hard time, but I wasn’t raising my hand to get the help I needed.” With time, though, came clarity. Although the music came regularly, Johnson still allowed himself to fantasize about a life never returning to professional music. He still contemplates earning a degree in social work. Yet, the songs kept bubbling up. On Every Feeling On A Loop, lush musical arrangements and harmonies support Johnson’s baritone crooning. At times, the songs sound like prayers. At others, his exuberance feels like the euphoria he’d always sought, this time hard-earned and wiser. He says he feels like a new person making it, charting his journey out of the dark into the wide-awake of the morning, using the magic that was his all along.