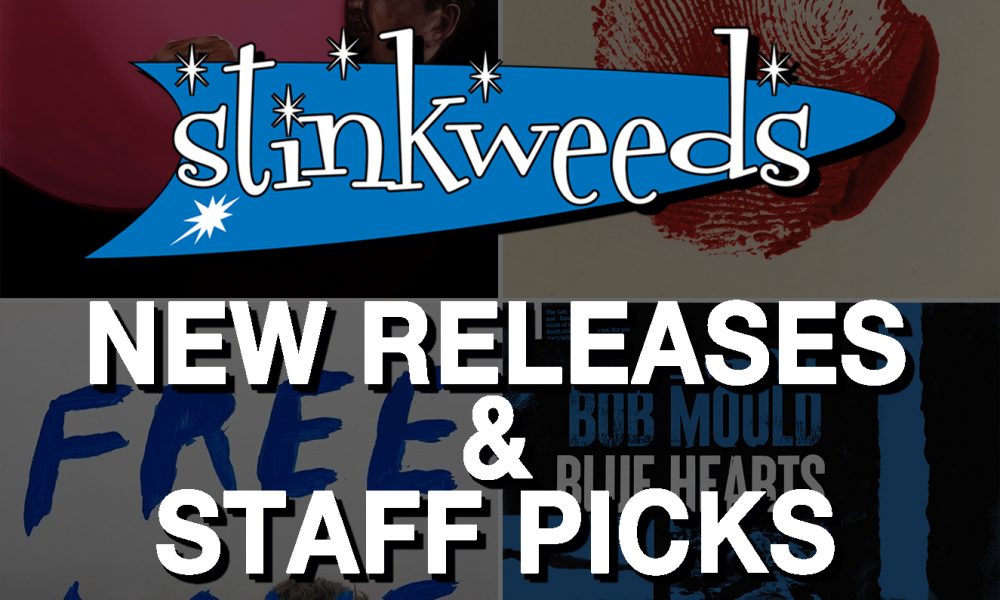 Deftones – Ohms CD/LP (WB)
Multiplatinum, Grammy Award-winning alternative rockers Deftones are back with their ninth studio album. Ohms is an other-worldly body of work meticulously crafted by the five-piece band. It is a magnificent tour de force and their first album in four years following 2016’s critically acclaimed Gore. The band, which includes Chino Moreno, Frank Delgado, Stephen Carpenter, Abe Cunningham, and Sergio Vega, has produced a dense LP with every member firing on all cylinders. Available on ltd edition gold vinyl.

IDLES – Ultra Mono CD/LP (Partisan)
Following Brutalism (2017) and Joy As An Act Of Resistance (2018), two releases that garnered global critical acclaim, Idles return with their highly anticipated third album – Ultra Mono. Sonically constructed to capture the feeling of a hip-hop record (including production contribution from Kenny Beats), the album doubles down on the vitriolic sneer and blunt social commentary of their past work. Not far beneath the surface of their self-admitted sloganeering lies a deeply complex and brutally relevant album that chews up clichés and spits them out as high art for the masses. This is momentary acceptance of the self. This is Ultra Mono. [Deluxe vinyl edition with gatefold packaging and a 28 page debossed Ultra Mono catalogue also available.]

Bob Mould – Blue Hearts CD/LP+MP3 (Merge)
In the winter of 2019, Bob Mould bucked the era’s despair with his most melodic, upbeat album in ages, Sunshine Rock. Cut to spring of 2020, and he has this to say: “We’re really in deep shit now.” That sentiment informs the new full-length album, Blue Hearts, the raging-but-catchy yin to Sunshine Rock’s yang. Recorded at the famed Electrical Audio in Chicago with Beau Sorenson engineering and Mould producing, Blue Hearts nods to Mould’s past while remaining firmly planted in the issues of the day.

Sylvan Esso – Free Love CD/LP (Loma Vista)
Free Love thrives on collaborative frisson – two people pushing one another into new territories with the shared assurance of knowing they’re in good company, a sort of trust fall in reverse. Yes, these 10 songs are some of electro-pop duo Sylvan Esso’s most direct. And most delicate. And most intricate. And most urgent. Free Love carries the confidence of two people delighted to be all those things, together, at once. Tantalizing opener “What If” is a brief, minimal and enticing track which finds Amelia Meath singing over spacious synth-bleeps, “Oh life, dying out/ And the oceans turn to clouds.” Available in limited edition colored vinyl.

Blitzen Trapper – Holy Smokes Future Jokes CD/LP+MP3 (Yep Roc)
Singer-songwriters have been tackling existential questions about life and death since time immemorial…or at least the 1960s. But when it came to Blitzen Trapper’s newest album, Holy Smokes Future Jokes, front man Eric Earley looked beyond mere existence – or even the end of it – to contend with grander cosmic explorations: namely, the intermediate period between a person’s separate lives on earth, “and what it means to escape the cycle of birth and rebirth,” he explains. Inspired by the experimental tome, Lincoln In The Bardo and The Tibetan Book Of The Dead, Earley’s lyrics take the listener on a wild and dramatic journey through rivers of waist-high water in the aftermath of a tragic car wreck and the hazy morning before a murderous moment, and from getting blitzed to the point of extinction inside a masonic temple to a stop for chips and dip before the apocalypse.

Will Butler – Generations CD/LP+MP3 (Merge)
In the five years since Will Butler released his debut album, Policy, he’s toured the world both solo and as a member of Arcade Fire, released the Friday Night live album, recorded and released Arcade Fire’s Everything Now, earned his master’s degree in public policy from Harvard, hosted a series of touring town halls on local issues (police contracts, prison reform, municipal paid sick leave, voting rights), and spent time raising his three children. Generations is a meditation on Butler’s place in society and history. According to Butler, “A big chunk of this record is asking: What’s my place in American history? What’s my place in America’s present? Both in general…but, also extremely particularly: me as Will Butler, rich person, white person, Mormon, Yankee, parent, musician of some sort, I guess.”

Reckless Kelly – American Jackpot/American Girls 2xCD (No Big Deal)
For nearly 25 years, Reckless Kelly has graced the musical landscape with a high-powered form of Americana, equally rooted in raw passion, refined musicianship, and gritty authenticity. With the dual release of two new albums – American Jackpot and American Girls – the Idaho-bred band presents a beautifully detailed portrait of their beloved country, turning their nuanced songwriting to its many glories and tragedies. While one batch of songs centers on slice-of-life storytelling and the other explores the complexities of human connection, the collective body of work unfolds with a profound and often eye-opening attention to the subtleties of American life. [Vinyl edition due October 16.]

Surfer Blood – Carefree Theatre CD/LP (Kanine)
Carefree Theatre is Surfer Blood’s fifth studio album and marks a return to their first label Kanine Records. Written and recorded in South Florida, it’s the first record the band has released since John Paul Pitts, the singer and main songwriter moved back to the state. It’s an album not as much looking back as coming full-circle. The Carefree Theatre in West Palm Beach, FL was the only venue in town for most of the band’s childhood; it’s where kids would go for everything from touring punk bands to community theater productions. It was the kind of experience that would expose a 21-year-old songwriter to a world outside of Florida, and inspire him to start a band and tour the country. [Limited edition blue colored vinyl pressing also available.]

Omar Rodriguez-López – The Cloud Hill Tapes Pts. I, II & III 3xLP (Clouds Hill)
During the 2000s Rodríguez-López released an astonishing variety of solo works. On these recordings the artist used pieces that had accumulated over the years. However, what has so far been missing is a release that brings together the pieces from that era. This wait now has come to an end. These recordings of three sessions dating from the years 2018 and 2019 and taken at the “Clouds Hill Studio” are now being gathered together as a triple-vinyl LP box set. Part I features eight pieces, and Parts II and III six pieces each, which have been entirely newly arranged, produced by Johann Scheerer, and performed by Omar Rodríguez-López and a range of guest musicians.

Prince ‎– Sign O’ The Times [Reissue/1987] 2xCD/2xLP (WB)
Overflowing with musical ideas and topical lyrics that sound just as relevant today as they did when they were initially released, Prince’s iconic double album Sign O’ The Times captures the artist in a period of complete reinvention and innovation. The final 16-track album included just some of the countless songs Prince recorded in the prolific period of 1985-1987, which saw the dissolution of his band The Revolution, the construction of his innovative recording complex, Paisley Park, and the creation (and ultimate abandonment) of the albums Dream Factory, Camille, and Crystal Ball. [Available in a wide variety of configurations: Standard, Expanded, Deluxe and Super Deluxe. The Deluxe edition adds 13 singles mixes and edits. The Super Deluxe edition contains 92 audio tracks, of which 63 are previously unreleased, including 45 studio tracks from Prince’s legendary Vault. A limited edition peach colored double-vinyl pressing is also available.]

Bill Callahan – Gold Record LP (Drag City)
Recently released on CD – now available on vinyl. The abiding humanity of latter-day Callahan is highlighted by dark plumes of caustic wit upending standards of our everyday life and the songs that celebrate it: the job, the wife, the TV, the neighbors. Bill slips easily into his characters, whether they’re easy people or not – and the cross-hatch of their light and shadow is unpredictably entertaining in the manner that belongs only one singer in this whole wide world: we’re still talking about Bill Callahan.

Dashboard Confessional – MTV Unplugged 2.0 LP (Hidden Note/MTV Unplugged)
Celebrating 20 years of Dashboard Confessional in 2020 – available on vinyl for the first time. Recorded in 2002 on the era-defining show MTV Unplugged, DBC’s performance holds a significant place in their lore. The set was released as the iconic emo band’s first live album on the heels of studio releases The Swiss Army Romance, The Places You Have Come To Fear The Most, and the So Impossible EP. This performance showcases re-imagined versions of seminal tracks such as “Hands Down” and “So Impossible” which receive a full-band treatment for the first time. [Limited brick and mortar indie store-only multi-colored splatter vinyl edition also available.]

The Weeknd – After Hours 2xLP (XO)
Now available on vinyl. The Weeknd’s latest chapter, After Hours, features the global hits “Heartless” and “Blinding Lights”. Filtering R&B, pop, and hip-hop through an ambitious widescreen lens, The Weeknd quietly took over popular music and culture on his own terms. As a result, the multi-platinum two-time Grammy Award winner has emerged as one of the most successful and significant artists of the 21st century.

Tricky – Fall To Pieces CD (!K7)
“Tricky has always worn his bruised heart on his sleeve. His brilliantly desolate debut album, Maxinquaye, was inspired by his mother, who died when he was four years old, and a song like ‘Strugglin’’ laid bare in excruciating detail his experiences of pain, darkness, and toil. Fall To Pieces, which contains some of the most darkly moving music that Tricky has produced since that debut album, was produced in the shadow of tragedy. Tricky’s daughter Mazy died in 2019 as he was beginning work on a new record. Here, on his 14th studio album, he translates that unimaginable loss into moments of nauseatingly raw emotion. However personal the burden of Tricky’s grief, his collaborators have played a significant role in shaping the sound and feel of the album. Marta Złakowska, who Tricky discovered in a Krakow bar after a singer dropped out of his Polish tour, has the perfect voice for a Tricky vocal foil, her spectral tones the wisp of smoke to his cigarette-end mutter, while Marie-Claire Schlameus’s cello and Kristof Hahn’s slide guitar creep around the arrangements with the finesse of art thieves.” – Pitchfork