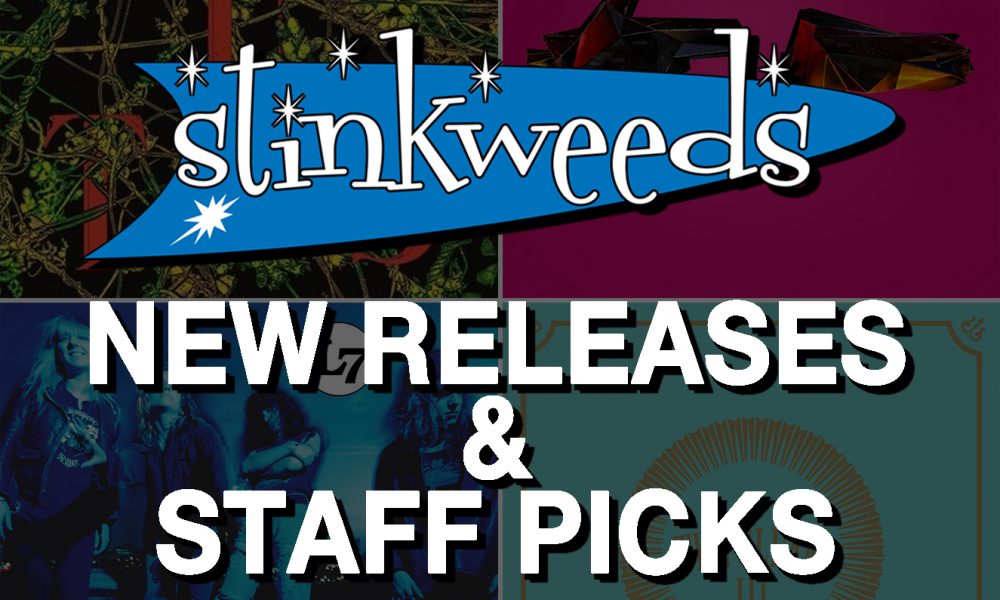 Run The Jewels – RTJ4 CD/2xLP (BMG)
Run The Jewels, the lauded duo of El-P and Killer Mike, return with their feverishly anticipated new album, Run The Jewels 4. The eleven song, 40 minute powerhouse is their most ferocious and focused effort to date, and sports a lineup of all-star guests including Pharrell Williams, Mavis Staples, 2 Chainz, Zack de la Rocha, Josh Homme, DJ Premier, and Greg Nice. Recorded primarily at Rick Rubin’s Shangri-La Studios and the iconic Electric Lady Studios in NYC, RTJ4 represents two years of intensive writing, recording, distilling, and amplifying the most potent elements of their music. The result is a collection of wall-to-wall bangers illuminating the group’s unique ability to straddle the worlds of pointed social commentary and raw, boisterous fun.

Osees – Protean Threat CD/LP (Castle Face)
From the pits as a quick booster between protein pills and recycled sweat beverage anthems to assist the listener to not worship at the altar of violence and greed, to not offer oneself up for free, to stand up and be vigilant! Truth will not be found in the speeches and photo ops of the overlords— stand strong and together under the gaze of the oppressors.Stand vigilant, united with those who don’t have the same privileges. Demand respect and a peaceful life for all. This recording is at the apogee of scuzz—punk anthem amulets for the ears and heart, a battery for one’s core. Be strong. Be human. Be love.

Cults – Host CD/LP (Sinderlyn)
Cults’ utterly mesmerizing new album, Host, was written more collaboratively than ever before and recorded primarily with live instruments for the first time. The collection marks the start of a bold new chapter for the band, one fueled by an ever-deepening trust and a boundless appetite for growth and experimentation. The songs here are deceptively charming, with lush, airy arrangements that belie their dark, weighty lyrics, and the production is rich and multifaceted to match, blending retro and futuristic palettes into a spellbinding swirl of high-def indie rock and lo-fi bedroom pop. As its title suggests, Host is an exploration of the sinister dynamics at play in a parasitic relationship, but rather than dwell in the discomfort, the record charts a cathartic journey towards freedom and self-reliance, reveling in the power that comes from standing your ground and declaring independence in the face of exploitation and manipulation.

L7 – Smell The Magic [Reissue/1990] CD/LP+MP3 (Sub Pop)
This 30th-anniversary edition of the ‘90s underground rock classic Smell The Magic (which originally came out as a six-track 12″/nine-track CD) includes all nine songs from the album, remastered and available together on vinyl for the first time. A multitude of rock music scenes populated the expanse of Los Angeles in 1989: hardcore punk, industrial goth, roots rock, and Sunset Strip hair metal, to name a few. L7 fit into none of them, creating their own unique blend of punk and hard, hooky rock loaded with humor and cultural commentary. Originally released in 1990, Smell The Magic is a landmark of ’90s feminist rock.

Arca – &&&&& [Reissue/2013] 12” (Pan)
For anyone who can remember, Arca’s &&&&& was a moment. Its 25-minute stretch of coiling, contorted grime and glitch; dub and hip hop dropped with the buzz of an impending co-production credit on Kanye West’s Yeezus in 2013. It included cuts of sound and beats that were too weird for that pop project, while becoming a piece of experimental art that what would come to define what is by now broadly known as a ‘post-club’ sound. Its music that is as visceral as it is experimental; madeas much for the mind, as it is for the body

Neil Young – The Times CDEP (WB)
The Times is a moving and topical solo acoustic performance, a unique collection of songs, filmed at home during lockdown as part of the raw and personal, Fireside Sessions series. The Porch Episode is the sixth session and is available only on Neilyoungarchives.com. The songs included on the seven-song EP are “Lookin’ For A Leader – 2020”, “Alabama”, “Campaigner”, “Ohio”, “Southern Man”, Bob Dylan’s “The Times They Are A-Changin’” and closes with “Little Wing” from Young’s recently released Homegrown.

The Archaeas – The Archaeas LP (Goner)
Beginning as a one witch band, Archaeas now perform as a perfectly-balanced rock trio with frightening power, reflecting punk rock ‘n’ roll from the last fifty years-AC/DC, Johnny Thunders’ Heartbreakers and The Dead Boys through The Reatards and Carbonas, even early Ty Segall-but The Archaeas are young enough to soak up sounds, attitudes, riffs and turnarounds from other bands and songs and still push them into their own Battle Royale.

Charli XCX – how i’m feeling now CD/LP (Atlantic)
London-based singer/songwriter is quickly proving an unqualified phenomenon with her edgy, yet addictive Charli XCX approach. Since her first critically-acclaimed track, “Nuclear Seasons” in 2011, Charlotte Aitchinson has released a plethora of singles, mixtapes, and psychedelic pop culture collage videos. Her latest release, how i’m feeling now is a completely unique project. Written, recorded and released in quarantine due to the COVID-19 pandemic, the album invites collaboration in a new way, as fans were welcomed to give feedback on every aspect of the record; from contributing to videos, to songwriting choices, to single selection and more.

El Ten Eleven – Tautology 3xCD/3xLP (Joyful Noise)
Experiencing an unexpected tragedy or loss often provokes a period of self-reflection, a time to contemplate one’s own place and purpose in the world. That was true for El Ten Eleven’s Kristian Dunn. When a beloved family member passed, Dunn found his own reflections on life emerging in the music he composed. Those expressions led to the creation of Tautology – a sonic meditation on the arc of human life, composed in three parts. Over the course of three discs, Tautology is, in Dunn’s words, a representation of life from the teenage years, through middle-age, until the end of life. The sounds on the album echo Dunn’s own experiences, veering from aggressive metallic riffs to blissful ambient soundscapes. And while there are shared melodies and harmonies through all three records, each one has its own distinct qualities. [Limited ultra-clear vinyl pressing also available.]

GA-20 – Love Vol. 1 7″ (Colemine)
These four tunes show the wide range of the group, ranging from mellow in the world of groups like The Wood Brothers to raw, electric blues more kin to early Black Keys LPs.

Fenne Lily – Breach CD/LP (Dead Oceans)
Breach is an expansive, candid, frequently sardonic record that deals with the mess and the catharsis of entering your 20s and finding peace while being alone. Fenne wrote Breach during a period of self-enforced isolation pre-COVID, after a disjointed experience of touring Europe, followed by a month alone in Berlin. The album deals largely with “loneliness, and trying to work out the difference between being alone and being lonely.” Although its subject matter is solitude, it sounds bigger and more intricate than anything she’s previously released.

Brad Mehldau Trio – Suite: April 2020 CD/LP (Nonesuch)
While sheltering at home with his family in the Netherlands during the COVID-19 pandemic, pianist and composer Brad Mehldau wrote twelve new songs about what he was experiencing; he was able to record them safely in an Amsterdam studio, together with interpretations of three tunes that mean a great deal to him personally. It resulted in the new solo album, Suite: April 2020.

The Avett Brothers – The Third Gleam LP (Loma Vista)
Limited 180gm vinyl pressing. Grammy Award-nominees The Avett Brothers release the highly-anticipated third installment in their ongoing Gleam series. The Third Gleam marks a return to The Avett Brothers’ roots, both sonically and in form with Seth and Scott Avett playing as a trio with longtime bassist Bob Crawford, and follows in the band’s tradition of sharing what’s on their minds and in their hearts as their lives, and the world around them, continue to evolve. Seth and Scott express that while The Third Gleam was recorded ahead of the pandemic and social reform movements that have swept the nation, the new music captures their personal experiences and perspectives on themes that are undeniably universal and timely. Throughout the eight-song collection, the band delves into isolation, incarceration, and injustice, as well as resilience, redemption, and love, offering a gleam of hope in a dark and uncertain time.

Joyce Manor ‎– Songs From Northern Torrance LP+MP3 (Epitaph)
Songs From Northern Torrance, the latest album from acclaimed California-based four-piece Joyce Manor, is a 10-track compilation of early material that offers a glimpse into the band’s humble beginnings as an acoustic two-piece. Originally recorded between 2008 and 2010, many of the tracks have become fan favorites over the years previously existing in a live setting, or on rare CD-Rs sold by the band during their early days on the road. Opaque yellow colored vinyl pressing.

Los Retros – Everlasting 12” (Stones Throw)
The new EP from Los Retros, aka Mauri Tapia, is a vulnerable, yet stylistically-rich collection of songs built around his impeccable curatorial ear and a natural instinct for updating vintage hooks and song structures. Across Everlasting, he reflects on a newfound sense of spirituality, love and positivity through five intimate, nostalgia-inducing songs that channel a variety of influences from soul and funk, to psychedelic rock.

Ministry – Every Day Is Halloween: Greatest Tricks [Reissue/2010] LP (Cleopatra)
Gold vinyl repress. Industrial legend Al Jourgensen revisits highlights from the Ministry canon and throws a spin on classics of yesteryear on this 2010 anthology. Features versions of fan favorites “Every Day Is Halloween”, “N.W.O.”, “Jesus Built My Hotrod” plus covers of songs by Black Sabbath, AC/DC, The Rolling Stones, Jimi Hendrix and more.

Mirah – You Think It’s Like This But Really It’s Like This [Reissue/2000] 2xLP+MP3 (Double Double Whammy)
20th anniversary remastered vinyl reissue, expanded with a compilation album of album covers from artists like Mount Eerie, Half Waif, Shamir, y La Bamba, and more. “I didn’t know I was making a record,” recalls the singer, songwriter, recording artist and producer, 20 years later, on the reissue of her now classic debut full-length, You Think It’s Like This But Really It’s Like This, originally released in 2000 by K Records. Some days, she’d be at home experimenting with four-track home-recording. Other days, she’d be over at Dub Narcotic’s giant warehouse space, in its wide open second floor studio, the Big Room, meeting up with friends like Phil Elverum (who she had collaborated with in The Microphones, and who co-produced the record), Khaela Maricich (of the Blow, who sings on some of the songs), and really, whichever cast of friends were around and wanted to play music.

Various  – What Is This That Stands Before Me (Sacred Bones)
To celebrate the 50th anniversary of both the self-titled Black Sabbath album and ‘Paranoid,’ Sacred Bones is proud to present ‘What Is This That Stands Before Me?’, a compilation of Sabbath covers recorded by artists from across our roster. Black Sabbath stands at the crossroads of every Sacred Bones employee and artist’s musical taste, and it was a great pleasure for us to work together to reimagine some of their most beloved songs. Here you’ll find Sabbath through the filter of the post-Soviet darkwave of Molchat Doma, the experimental folk of Hilary Woods, the laid-back psych of Moon Duo, and a half dozen more genres besides. Satan’s coming ’round the bend.

Valium Aggelein – Black Moon (Numero Group)
Duster side project! Just as Duster’s landmark debut album Stratosphere was making its first orbit, Clay Parton, Dove Amber, and Jason Albertini tracked a largely improvised companion capsule under their Valium Aggelein alter ego. An ode to ’70s Kosmische, Hier Kommt Der Schwartze Mond is a skeletal space nap for the prozac generation. Remixed and remastered from the original 16 track analog tapes, the 1998 album has been adjoined by 15 period-appropriate bonus tracks. A fuzzy masterpiece, hidden in plain sight, by the most important slowcore band of all time.