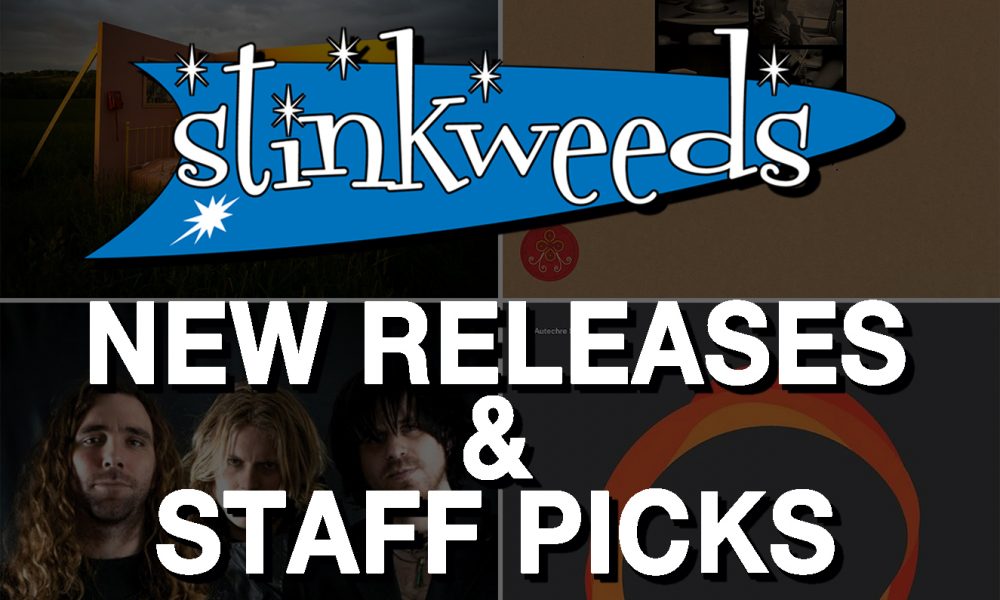 Autechre – Sign CD/2xLP+MP3 (Warp)
Practically pocket-sized in comparison to their sprawling torrent of live material and radio recordings in recent years, Sign is a return to the sort of concision found circa Exai and their earlier albums. Effectively they’ve gotten better to grips with their live set-up, and the hyper ideas found in their work-in-progress demonstrations on the five volume Elseq and eight hours of NTS Sessions have been refined into moments of crystalline ambient baroque beauty and liquid-limbed swag on Sign. After their music has undergone what could be called a growth spurt in recent years, the acrid plasma of their complex, hyper-inorganic systems feels to congeal, create more intricate snaps across the album.

Fuzz – III CD/LP (In The Red)
Charles Moothart, Ty Segall and Chad Ubovich are Fuzz. III was recorded and mixed at United Recording under the sonic lordship of Steve Albini. Keeping the focus on the live sounds of the band, the use of overdubs and studio tricks were kept to a minimum. Albini’s mastery in capturing sound gave the trio the ability to focus entirely on the playing while knowing the natural sounds would land. It takes the essential ingredients of “guitar-based music” and “rock and roll power trio” and puts them right out on the chopping block. It was a much more honest approach for the band—three humans getting primitive, staying primitive.

Deep Sea Diver – Impossible Weight CD/LP (ATO)
Impossible Weight, the third full-length from Deep Sea Diver, is a work of sublime highs and mesmerizing lows, its restless intensity both unsettling and transcendent. Co-produced by bandleader Jessica Dobson and Andy D. Park, the album’s lush textures and mercurial arrangements reveal the limitless imagination of Dobson’s guitar work (which she’s previously shown in playing lead guitar for Beck and The Shins) and fully illuminates the power of her vocals. “I’d never produced a record before and I started out with low expectations for myself, but at some point I realized, ‘I can do this,'” Dobson recalls. “I decided to completely trust my voice and make really bold decisions in all my production calls – just push everything to the absolute outer edges.”

Various Artists – Blue Note Re:imagined 2xCD/2xLP (Blue Note/Decca)
Legendary labels Decca Records and Blue Note have joined forces for Blue Note Re:imagined; a new collection of 16 classic tracks, reworked and newly recorded by a selection of the UK scene’s most exciting young talents. A bridge between the ground-breaking label’s past and future, the project features contributions from a rollcall of acclaimed jazz, soul and R&B acts like Shabaka Hutchings, Ezra Collective, and more, as well as Jorja Smith, who reworks St Germain’s “Rose Rouge”.

beabadoobee – Fake It Flowers CD/LP (Dirty Hit)
Earning the 2020 Brit Award for Rising Star, beabadoobee has navigated the world of global touring, viral fame and musical creation to work towards a dazzling debut album. Fake It Flowers is a testament to this. Bea adopts a mature sound, where her familiar warm, fuzzy lo-fi lies between strings and melodies, bringing the raw honesty of her DIY roots into a new era.

Goldmund – The Time It Takes CD/LP (Western Vinyl)
Pennsylvania native Keith Kenniff’s output as Goldmund has established him as one of the preeminent composers of minimal piano-based ambient music alongside peers like Hauschka, Dustin O’Halloran, and even Ryuichi Sakamoto, who himself once described Kenniff’s work as so, so, so beautiful. His recordings tread sincerely along paths laden with dusty timbres, diffuse synthesizer, and soaring string textures tinted by the muted glow of a cloudy analog sky above. On The Time It Takes, Goldmund’s newest book of aural polaroids, Kenniff somehow manages to deepen the emotionality of his already affecting project, creating a space in which to unfold the sorrows of a troubling age and revel in the hope and beauty that follow thereafter. In this sense, The Time it Takes tackles grief head-on, unadorned by themes of escapism or pastorality, and marks another entry in an impressively consistent body of work.

Kevin Morby – Sundowner CD/LP (Dead Oceans)
“Ever a songwriter with a sense of journey, Morby’s lyrics mix the autobiographical with abstractions of the everyday, iconography is given entirely new meaning as you witness an artist’s wonderfully unique perspective. Within the sound of Sundowner you are taken outside to look upon a wonderful vista, feel the gravel crunch under your feet, the wind running through your hair as a chime sings in the distance. The instrumentation and guitar playing in particular can sometimes feel like a serenade, to encapsulate such place and time easily lends credit to the talent of this songwriter and all of a sudden, you are a sundowner too.” – Clash Music [Limited opaque yellow colored vinyl pressing also available.]

Tobin Sprout – Empty Horses CD/LP (Fire)
Artist, illustrator, writer and lo-fi innovator, Tobin Sprout was the super-productive partner of Robert Pollard in the legendary Guided By Voices. The gifted songwriter returns with a pensive, expansive part autobiographical new album Empty Horses. Here he’s part Townes Van Zandt, part John Prine, part Robbie Robertson at his retrospective best. The album is a meticulously observed study of America and Americana (not the music, but the state of mind). An alternative American Songbook, if you will, a collection of laments to simpler times and the struggle for what’s right, peppered with an examination of faith and the search for a sense of justice. Close up and personal, Empty Horses is a poignant carefully etched experience, a rolling journey in modern times, nodding back to tradition, a personal snapshot filled with honesty.

Reckless Kelly – American Jackpot/American Girls 2xLP (No Big Deal)
Recently released on CD – now available on vinyl. For nearly 25 years, Reckless Kelly has graced the musical landscape with a high-powered form of Americana, equally rooted in raw passion, refined musicianship, and gritty authenticity. With the dual release of two new albums – American Jackpot and American Girls – the Idaho-bred band presents a beautifully detailed portrait of their beloved country, turning their nuanced songwriting to its many glories and tragedies. While one batch of songs centers on slice-of-life storytelling and the other explores the complexities of human connection, the collective body of work unfolds with a profound and often eye-opening attention to the subtleties of American life.