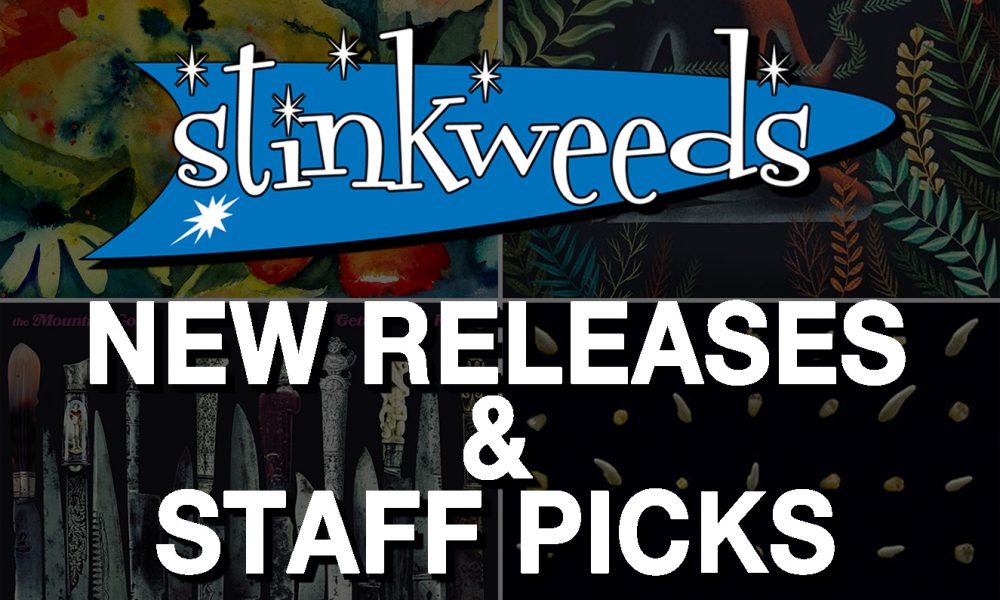 Clipping – Visions Of Bodies Being Burned CD/2xLP+MP3 (Sub Pop)
Visions Of Bodies Being Burned contains thirteen scary stories disguised as rap songs, incorporating as much influence from Ernest Dickerson, Clive Barker, and Shirley Jackson as it does from Three 6 Mafia, Bone Thugs-N-Harmony, and Brotha Lynch Hung. Clipping are never critical of their cultural references. Their angular, shattered interpretations of existing musical styles are always deferential, driven by fandom for the object of study rather than disdain for it. Clipping reimagine horrorcore – the purposely absurdist hip-hop subgenre that flourished in the 1990s – the way Jordan Peele does horror cinema: by twisting beloved tropes to make explicit their own radical politics of monstrosity, fear, and the uncanny.

Gorillaz – Song Machine, Season One CD/LP/2xLP+CD (WB)
Song Machine, Season One is Gorillaz’s newest concept which started in January 2020, releasing brand new material episodically – as and when it happens – and has continued throughout the year. The ongoing and ever-evolving process has seen our favorite characters joined by an expanding roster of collaborators captured live in Kong Studios and beyond. The result is an 11-track collection (and 17 on the Deluxe Edition) embracing a myriad of sounds, styles, genres and attitudes from a breath-taking line-up of guest artists including Beck, Elton John, Robert Smith, ScHoolboy Q, St. Vincent, Peter Hook, 6LACK, Leee John, Georgia, Ovtavian, Kano, Roxani Arias, Fatoumata Diawara, Slowthai and Slaves. [Indie store exclusive vinyl pressing available.]

Mountain Goats – Getting Into Knives CD/LP+MP3 (Merge)
On the first of March 2020, John Darnielle, Peter Hughes, Matt Douglas, and Jon Wurster, aka The Mountain Goats band, visited legendary studio Sam Phillips Recording in Memphis, TN. Darnielle armed his band with new songs and reunited with producer Matt Ross-Spang who engineered last year’s In League With Dragons. In the same room where The Cramps tracked their 1980 debut album, The Mountain Goats spent a week capturing the magic of a band at the top of its game. The result is Getting Into Knives, the perfect album for the millions of us who have spent many idle hours contemplating whether we ought to be honest with ourselves and just get massively into knives.

Pallbearer – Forgotten Days CD/LP (Nuclear Blast)
Carefully plotted throughout 2019, the quartet’s fourth long player eschews the compositional maximalism that hoisted predecessor Heartless aloft for the heaviest groove and the most visceral hooks to come out of the Arkansans to date. Spread across eight towering tracks, Forgotten Days sees Pallbearer embracing their roots again, but this time with a doom-infused metallic spark that’s infectious and transcendent. Indeed, this album is everything a Pallbearer fan could love.

Adrianne Lenker – Songs And Instrumentals CD/LP (4AD)
Songs And Instrumentals are two distinct collections, both written and recorded in April 2020 after Big Thief’s March tour was abruptly cut short due to COVID-19. After returning to the states from Europe, frontman Adrianne Lenker decamped to a one room cabin in the mountains of western Massachusetts. “I grew really connected to the space itself,” says Lenker. “The one room cabin felt like the inside of an acoustic guitar – it was such a joy to hear the notes reverberate in the space.” With a hankering to capture the feel of the space, Lenker enlisted the help of engineer Philip Weinrobe, gathering a mass of tape machines, a binaural head, and a pile of XLR cables.

Loma – Don’t Shy Away CD/LP+MP3 (Sub Pop)
Don’t Shy Away is shot through with revelations, both joyful (“Given A Sign”) and sober (the clear-eyed title track), and winds from moment to moment with confidence and humor. Like Loma’s first effort, there’s a tangible and sensuous feeling of place; insects sing in the trees, an ill-fitting door creaks in the wind. But there’s also a daring and hard-won wisdom, underlined by Cross’s benevolent clarinet, which often sounds like an extension of her singing voice. “Ocotillo”‘s desert landscape unreels into a blazing sun; “Elliptical Days” seems to ascend endlessly like Escher’s circling monks; the jubilant “Breaking Waves Like A Stone” appears out of a haze of synthesizers that pulse like fireflies. A series of guests wander through these absorbing soundscapes, including touring members Emily Lee (piano, violin) and Matt Schuessler (bass), Flock Of Dimes/Wye Oak’s Jenn Wasner, and a surprisingly bass-heavy horn section. Brian Eno mixed the mantra-like “Homing,” which concludes the album.

Beastie Boys – Beastie Boys Music CD/2xLP (Capitol)
Beastie Boys Music is a new 20-song collection covering the Grammy Award winning and multi-platinum selling Beastie Boys’ recording career. The release is a companion piece to the critically acclaimed documentary Beastie Boys Story, currently nominated for five Emmys, and the group’s best-selling Beastie Boys Book, which ascended to No. 1 on The New York Times Best Sellers List. Spanning the group’s 30 plus year career, the set includes “Fight For Your Right”, “Brass Monkey”, “Paul Revere” and “No Sleep Till Brooklyn” from their debut Licensed To Ill, “Shake Your Rump” and “Hey Ladies” from their 1989 reinvention Paul’s Boutique and “So What’Cha Want” and “Pass The Mic” from 1992’s Check Your Head.

Bruce Springsteen – Letter To You CD/LP/2xLP (Columbia)
Letter To You is Bruce Springsteen’s new studio recording with the E Street Band and is a rock album fueled by the band’s heart-stopping, house-rocking signature sound. Recorded at his home studio in New Jersey, Letter To You is The Boss’ twentieth studio effort, and his first album with the E Street Band since 2012’s High Hopes and their first performances together since 2016’s The River Tour. Letter To You includes nine recently written Springsteen songs, as well as new recordings of three of his legendary, but previously unreleased, compositions from the ’70s, “Janey Needs a Shooter”, “If I Was The Priest”, and “Song For Orphans”. Springsteen is joined on Letter To You by Roy Bittan, Nils Lofgren, Patti Scialfa, Garry Tallent, Stevie Van Zandt, Max Weinberg, Charlie Giordano and Jake Clemons. [Indie store only deluxe double-LP edition available.]

Magik Markers – 2020 CD/LP (Drag City)
Here we are in 2020, exploding like a dream. Processing today’s numbed nation, considering mysteries of growing up and being older (like a memory of the future from your youth (not how you expected, but still your life)), Magik Markers rub upon their roots, art-noise jamming their way into non-linear song-sense and raw, beautiful music all at once.

Plants and Animals – The Jungle CD/LP (Secret City)
Shop favorite, Plants and Animals return with their first new album in 4 years. The Jungle starts with electronic drums that sound like insects at night. A whole universe comes alive in the dark. It’s beautiful, complex and unsettling. Systematic and chaotic. All instinct, no plan. Voices taunt, “yeah yeah yeah.” This tangled time in which we find ourselves reflected back in shadows.

Actress – Karma & Desire CD/LP (Nina Tune)
Karma & Desire — a follow up to critically acclaimed records AZD, Ghettoville, Hazyville, and more — includes collaborations with Sampha, Zsela, Aura T-09 (co-runs Evar Records with John Frusciante), Vanessa Benelli Mosell and Rebekah Christel. The album will be accompanied by ‘a broken romance espionage ethereal short film‘ by creative director and performance artist Lee Nachum aka Bootee that explores a number of dichotic themes. These themes are to be revealed across the campaign (and beyond) through both digital and physical creative marketing ‘moments’, which kicked off with a surprise 49min audio file from Actress entitled “88”. “88” was revealed by Actress in July and made available to stream and download for free through Bandcamp before retreating into the ether as quickly as it came. The release marked the first new music from the producer (outside of his Young Paint alias) since 2018’s team-up with the London Contemporary Orchestra,

Chavez – Gone Glimmering 2LP (Matador)
Gone Glimmering, the debut album from Chavez, is back in print and expanded to include the tracks from the band’s Pentagram Ring EP on vinyl for the first time. The double LP features a gatefold sleeve and new artwork. Part of Matador’s ongoing Revisionist History series that includes releases from Pavement, Yo La Tengo, Guided By Voices and many more, the reissue will be accompanied by archival music videos, never-before-seen clips and newly recorded interviews with Chavez’s Matt Sweeney and Clay Tarver.

Wallows – Remote CDEP/12” (Atlantic)
Following the success of their debut album, Nothing Happens, and summer smash “Are You Bored Yet?” (feat. Clairo), Wallows release their new quarantine-made EP titled Remote. Lead track is quirky love song, Nobody Gets Me (Like You). It’s a sun-kissed ‘80s inspired bundle of joy which is upbeat and instant. [Limited pink colored vinyl pressing also available.

Boy Pablo – Wachito Rico CD/LP (U OK/777)
The artistic project of 21-year-old singer-songwriter and multi-instrumentalist Nicolas Muñoz, the debut LP from Boy Pablo takes its title from a Chilean expression that translates “to fondness for a handsome boy”. A hybrid conceptual and autobiographical record, it traces the ebbs and flows of the titular character’s love story while threading this narrative through with the Norwegian bedroom pop sensation’s own experiences as a young person, blurring the identities of Wachito Rico and the real-life Nicolas Muñoz into one curious, indistinguishable whole.

John Frusciante – Maya CD/LP (Timesig)
John Frusciante releases the first instrumental electronic album under his own name on Aaron Funk’s Timesig label. The record is dedicated to his cat Maya who recently passed away, a fellow traveler in his otherwise solitary music making sessions. He says, “Maya was with me as I made music for 15 years, so I wanted to name it after her. She loved music, and with such a personal title, it didn’t seem right to call myself Trickfinger, somehow, so it’s by John Frusciante.”

Skullcrusher – Skullcrusher 12” (Secretly Canadian)
Skullcrusher is, by all accounts, an exploration of the ways you become yourself when you aren’t looking – and how that feels once you start paying attention. It’s a quiet power; a hushed celebration of the tiny, understated subtleties that culminate into knowing yourself. On her debut EP, songwriter Helen Ballentine offers an airy, intense, and unflinchingly open collection of songs written about – and from – one of life’s in-between gray areas, a stretch of uncertainty and unemployment, and the subsequent search for identity.

Freddie Gibbs and The Alchemist – Alfredo LP (ESGN)
After releasing the critically acclaimed Banada album in 2019, Freddie Gibbs returns with The Alchemist behind the boards for what is being hailed as one of the best albums in 2020 with, Alfredo. A play on both Freddie and Alchemist’s names, the project also boasts features from Rick Ross, Tyler, The Creator, Benny The Butcher, and Conway the Machine.