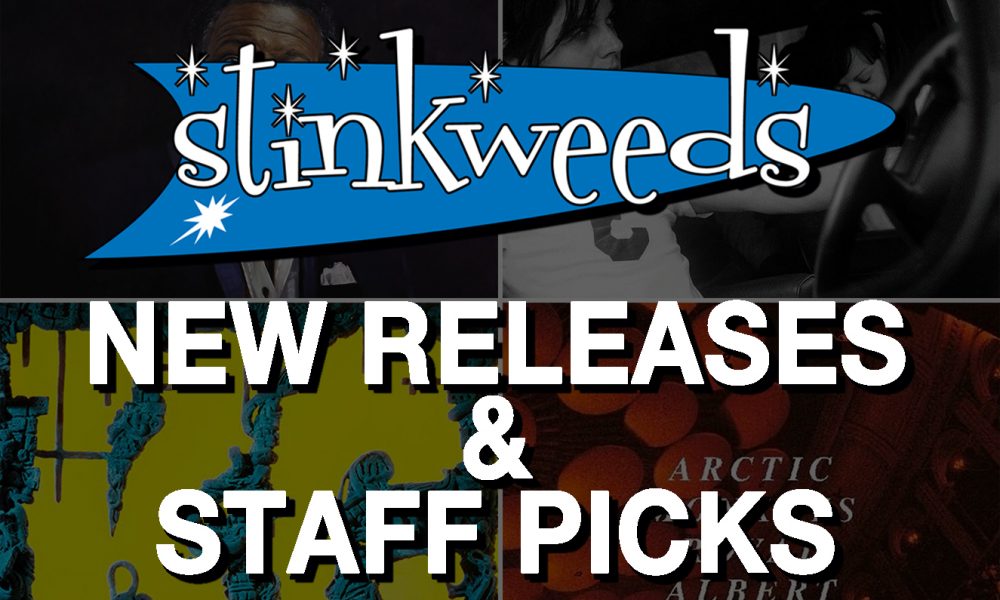 Arctic Monkeys – Arctic Monkeys Live At The Royal Albert Hall 2xCD/2xLP+MP3 (Domino)
Recorded at the start of the band’s Tranquility Base Hotel + Casino tour, Arctic Monkeys Live At The Royal Albert Hall features 20 of the band’s finest moments to date. “On June 7, 2018 we played a very special show at London’s Royal Albert Hall,” notes the band. “All the proceeds from that memorable night were donated to War Child UK in support of the vital work they do protecting, educating and rehabilitating children who have experienced the trauma of conflict and the horror of war. The situation that was bad in 2018 is now desperate and those children and their families need our help more than ever. To enable War Child UK to reduce their funding deficit and continue their valuable work, we are happy to be able to release a live album, recorded that evening at The Royal Albert Hall. All proceeds will go direct to the charity. We thank all our fans in advance for their support of this release and in turn for their support of War Child UK.”

Lee Fields & The Expressions – Big Crown Vaults Vol 1 CD/LP (Big Crown)
There are always a handful of unreleased songs that didn’t make their way to albums. Listening back to these gems Big Crown decided to launch a new series entitled Big Crown Vaults and the first volume features the music of Lee Fields & the Expressions. These tunes were cut during the Special Night & It Rains Love sessions. Listening to these tracks you can imagine how difficult some of these decisions were in the first place to leave them off the albums. An absolute standout is “Regenerate,” a song that finds Lee in the country soul realm, a style that Mr Fields, a North Carolina native, flourishes in. A drum break starts the song and then drops into a chorus where El Michels, Paul & Big Bill Schalda belt out the earworm chorus. People who have seen Lee perform live in the last decade might have been lucky enough to hear his rendition of Little Carl Carlton’s “Two Timer”. For those of you who haven’t heard it, Big Crown Vaults has got you covered. A faithful version of the song showcases Lee’s gorgeous voice and the Expression’s unwavering groove. Another treat on here is the fuzzed out funk banger “Do You Know” where Fields uses his platform to address some of our societal woes in a “Make The World” style. A deeper from the vaults number is “Out To Get You”, an instrumental that Lee never laid down vocals to. Even as just a rhythm track it stands as a testament to The Expressions musical prowess, the band that created 5 studio albums with Lee Fields which will go down in history as stone classics.
King Gizzard and The Lizard Wizard – K.G. CD (KGLW)
King Gizzard & The Lizard Wizard return with new album K.G., their sixteenth since forming in 2010. In the wake of a global pandemic, it’s a collection of songs composed and recorded remotely after the six members of the band retreated to their own homes scattered around Melbourne. K.G. is a pure distillation of the King Gizzard sound, one that cherry picks the best aspects of previous albums and contorts them into new shapes via defiantly non-western rock scales. K.G. is the second volume in the band’s “microtonal” series that began with 2017’s Flying Microtonal Banana. “FMB was one of the purest and most enjoyable recording experiences we’ve had, and the ideas just kept coming,” explains de facto bandleader/multi-instrumentalist Stu Mackenzie. “It’s almost like an album that normal people make.” [Vinyl edition due December 11.]

The White Stripes – The White Stripes Greatest Hits CD/2xLP (Third Man)
The first-ever official anthology of recordings from the iconic rock duo, Jack and Meg White, is an essential career-spanning collection highlighting 26 previously released songs – from late ‘90s flashes of brilliance through early 2000s underground anthems, masterful MTV Moon Man moments, Grammy-grabbing greatness, and worldwide stadium chants…the songs here are as wide-ranging as you can imagine. In an era of streaming where the idea of a “Greatest Hits” album may seem irrelevant – that an act’s most streamed songs are considered their de facto “hits” – we wholeheartedly believe that great bands deserve “Greatest Hits” and that a large part of Third Man Records’ and The White Stripes’ successes have been built on zigging when the rest of the music business is zagging. Thus, for a great band with great fans, a greatest hits compilation for The White Stripes is not only appropriate, but absolutely necessary.

Calexico – Seasonal Shift CD/LP (City Slang)
Calexico’s ’Seasonal Shift’ is less of a Christmas album and more of a cross cultural seasonal celebration. The themes are based around that familiar end of year feeling, of reflection, of ceremony and of recognition of the year gone by and changes it brought for better and for worse. It contains a few cover songs including classics by John Lennon & Yoko Ono and Tom Petty, a few more special guests and a whole load of good will. It’s heartfelt but fun, and earnest but celebratory. It features Calexico in an assortment of guises, referencing Portuguese Fado and Old Mexican Folk Songs, from the stripped back 2 man skeleton to the full party of international collaborators including artists like Bombino, Gaby Moreno, Gisela João, Nick Urata (DeVotchKa) and Camilo Lara.

Deafheaven – 10 Years Gone CD/2xLP+MP3 (Sargent House)
Deafheaven are celebrating the first decade of their illustrious career with a new studio-recorded live album, 10 Years Gone. There is no denying the absolute power of Deafheaven’s live show. Since the days of their now-legendary 2010 demo, the band put on raw performances that combined the sonic assault of black metal with an uplifting emotional quality. The latter comes through in frontman George Clarke’s throat-shredding vocals, which are even more visceral and affecting in person. [Limited double green and yellow colored vinyl pressing also available.]

Margo Price – Perfectly Imperfect At The Ryman CD/2xLP (Loma Vista)
In 2018, Margo Price claimed her rock star status at the Mother Church of Country Music. She was headlining the Ryman Auditorium for the first time ever, in a sold-out run of three nights that she had admittedly spent more time planning than her wedding. Now, Margo revisits the career-changing residency with the release of the live album, Perfectly Imperfect at The Ryman. With special guest appearances from Jack White, Emmylou Harris and Sturgill Simpson.
Emma Ruth Rundle & Thou – May Our Chambers Be Full CD/LP (Sacred Bones)
Stemming out of an offer from Roadburn Festival organizer Walter Hoeijmakers, mutual acquaintances, and a shared love of each other’s output, May Our Chambers Be Full is the first recorded document of collaboration between Emma Ruth Rundle and Thou. While their solo material seems on its face to be quite disparate, both groups have spent their respective careers lurking at the outer boundaries of the heavy metal scene, the artists having more in common with DIY punk and it’s spiritual successor, grunge. [Limited dark purple colored vinyl pressing also available.]

Secret Machines – Awake In The Brain Chamber CD (TSM)
In a world turned upside down, The Secret Machines are back, and looking for light in the chaos. Awake In the Brain Chamber, the band’s fourth LP and first recorded output in more than ten years, is the sound of things falling apart, with the hope of dawn touching the horizon. If there is a crack in everything, Curtis and Garza are more interested in the light coming in. Curtis’ darkly prophetic lyrics speak of isolation and fear, while Garza’s frenetic, pounding drum beats sound of the four horsemen. But just when things look their worst, the Machines’ beautifully ethereal space-rock takes us away to a different, safe destination: A place with angels, where dreaming is alright, and life blooms from a new disaster.

Bonobo – Black Sands [Reissue/2010] 2xLP (Ninja Tune)
Limited double red colored vinyl pressing in gatefold jacket. Influenced by the divergent, bass-driven strands of the UK electronic music scene at that time, multi-instrumentalist Simon Green artfully fitted those evolving sounds into his own wider vision on Black Sands. Ten years on, the record stands as the launch pad for Green’s stealthy but unstoppable rise to being one of the biggest electronic artists of our times.

S. Carey ‎– All We Grow [Reissue/2010] LP+MP3 (Saddle Creek)
All We Grow was and is a convergence of S. Carey’s young lifetime spent immersed in music: his Waltz For Debby-era Bill Evans inflected jazz tendencies; his performance degree in classical percussion from the University of Wisconsin, Eau Claire; his central role in the gale force power of the Bon Iver live show; his hints of Mark Hollis’ Talk Talk.

Com Truise – In Decay, Too 2xLP+MP3 (Ghostly Int’l)
In Decay is a compilation album by American electronic musician Seth Haley’s project Com Truise, originally released in 2012. The record is a collection of tracks that, before its release, were only available as demos found on Haley’s internet mixtape series Komputer Kasts and his SoundCloud account. These early tracks, some of which were produced before the release of Cyanide Sisters (2010), showcase Haley exploring an electropop funk music sound that would later come to define the Com Truise project.

MisterWives – Superbloom 2xLP (Fueled By Ramen)
Recently released on CD – now available on vinyl. An intensely personal reflection on growth in unexpected places, New York City-based group MisterWives’ Superbloom is a 19-track epic (including five tracks also featured on the group’s 2019 EP Mini Bloom), that marks a moment of major transformation for frontwoman Mandy Lee and her bandmates. “This album unfolds my journey of finding a superbloom within the barren desert and the needed juxtaposition of the two in order to grow,” says Lee. Inspired by a trip to California’s Antelope Valley, Lee comments on the title track single, “Standing amongst the vast and vibrant flowers that weren’t supposed to grow in the desert terrain, I was moved by its beauty and accurate representation of where I was at in life. Just like the flowers, I had grown in unexpected places. After experiencing a not-so-graceful and incredibly turbulent fall to rock bottom, I picked myself up and slowly grew through the pain. I felt an awful lot like these resilient little poppies that came out the other side against all odds – and I think that deserves congratulations.” [Limited yellow colored vinyl pressing also available.]
N*E*R*D ‎– Nothing [Reissue/2010] 2xLP (Interscope)
Tenth anniversary vinyl reissue. Sonically, Nothing was inspired by the late ‘60s and early ‘70s and features production from Daft Punk, and The Neptunes.
McCoy Tyner ‎– The Real McCoy [Reissue/1967] LP (Blue Note)
Limited 180gm vinyl LP pressing. In 1967, pianist McCoy Tyner was ready for a new start, leaving seminal John Coltrane Quartet and Impulse! Records two years prior. His Blue Note debut, The Real McCoy, firmly established him as a creative force. The album features a world class quartet with Joe Henderson (tenor sax), Ron Carter (bass) and Elvin Jones (drums).
COMING NEXT WEEK
AVALANCHES – We Will Always Love You CD/LP
BELLE AND SEBASTIAN – What To Look For In Summer CD/LP
BORIS W/MERZBOW – 2r0i2p0 CD/LP
INTERPOL – Our Love To Admire LP reissue
KILLS – Little Bastards CD/LP
PUSCIFER – Existential Reckoning CD/LP
JOJI – Nectar CD/LP
KACY + CLAYTON / MARLON WILLIAMS – Plastic Bouquet CD/LP
STURGIL SIMPSON – Cuttin Grass CD/LP
FOUR TET – There Is Love In You LP
LAURA JANE GRACE – Stay Alive CD/LP
GUIDED BY VOICES – Styles We Paid For CD/LP
MUMFOR AND SONS – Delta Tour EP
O SEES – Panther Rotate CD/LP
M WARD – Think of Spring CD/LP
KELLY FINNIGAN – A Joyful Sound CD/LP
KILLERS – Imploding The Mirage CD/LP
YOUNG MARBLE GIANTS – Colossal Youth reissue CD/LP
JAMIE XX – In Colour LP reissue
KAMASI WASHINGTON – Becoming Soundtrack LP