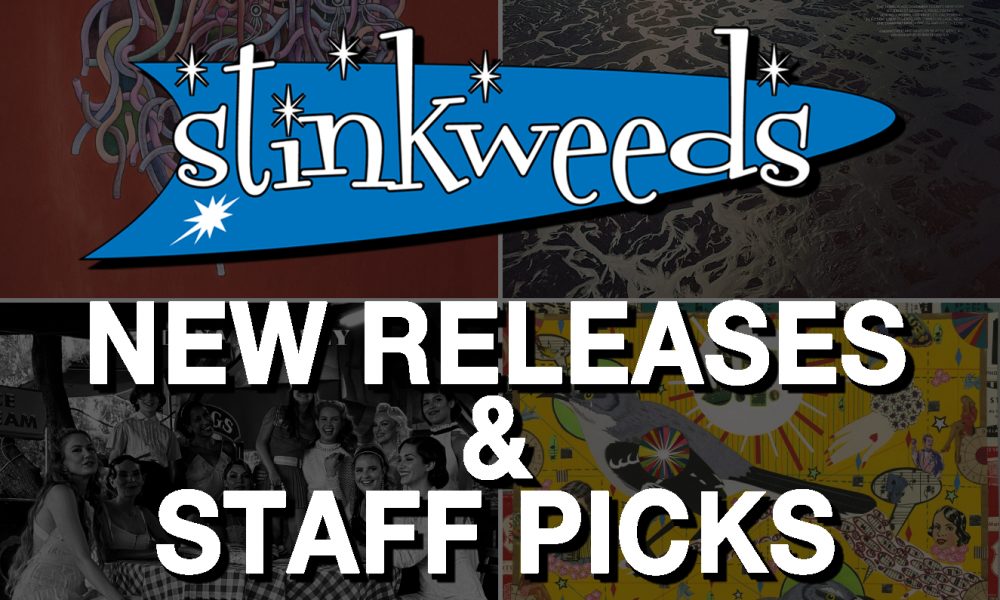 Steve Earle and The Dukes – J.T. CD/LP (New West)
On August 20, 2020 the world lost an amazing light with the passing of Justin Townes Earle. Justin was a vibrant songwriter who could play the blues, country, and rock ‘n’ roll all in the same song. In his short career, Justin released eight albums and one EP that all manage to sound classic and yet inventive. Justin’s father, Steve Earle, pays tribute to his son by recording an album of songs written by Justin titled, J.T. the album consists of ten Justin Townes Earle songs as well as one song written by Steve. J.T. features such fan favorites as “Harlem River Blues”, “Far Away In Another Town” and “Champagne Corolla” along with lyrically heavy songs like, “The Saint Of Lost Causes” and “Turn Out My Lights”. J.T. is a loving tribute to a loved son and beautiful songsmith who left this earth too early. But in his wake, Justin left a wealth of beauty. All proceeds from this release will be put into a trust for Justin’s daughter, Etta.

Fleet Foxes – Shore CD/2xLP (ANTI-)
Fleet Foxes return with their fourth full-length album Shore, bringing the dark sophistication of 2017’s Crack-Up to new heights with a soulful, sun-shined hue and fresh rhythmic vitality. The songs have dark themes of loss and struggle, but contain an uplifting lyrical power and sense of musical joy that remind us we can make it through the toughest of times. The 15-song, 55-minute album was initially inspired by frontman Robin Pecknold’s musical heroes such as Arthur Russell, Nina Simone, Sam Cooke, Emahoy Tsegué-Maryam Guebrou and more who, in his experience, celebrated life in the face of death. “I see “shore” as a place of safety on the edge of something uncertain, staring at Whitman’s waves reciting ‘death,'” commented Pecknold. “Tempted by the adventure of the unknown at the same time you are relishing the comfort of the stable ground beneath you. This was the mindset I found, the fuel I found, for making this album.” [A limited edition indie store exclusive vinyl pressing is also available.]

Valerie June – The Moon And Stars: Prescriptions For Dreamers CD/LP (Fantasy)
Released last week on CD – now available on vinyl. Produced by Jack Splash (Kendrick Lamar, Alicia Keys, John Legend) and Valerie June, The Moon And Stars: Prescriptions For Dreamers achieves a transcendent effect thanks in no small part to the splendor of its sound, an exquisitely composed tapestry of folk, soul, gospel, country, blues, psychedelia, and time-bending symphonic pop. The result is a selection of songs both ornate and elegant, each moment crafted with a profound awareness of what’s most essential in creating enduring beauty. The follow-up to June’s widely adored The Order Of Time – a 2017 effort that earned the admiration of Bob Dylan and landed on best-of-the-year lists from the likes of Rolling Stone and the New York Times – The Moon And Stars: Prescriptions For Dreamers is a potent catalyst for that kind of magic. With her spellbinding vocals and infectious sense of wonder, Valerie June gently eases the listener into a far more charmed state of mind, one that quickly restores a powerful feeling of joyful possibility.

Loretta Lynn – Still Woman Enough CD/LP (Legacy/Sony)
The American music icon’s 50th studio album (excluding her ten studio duet collaborations with Conway Twitty), Still Woman Enough celebrates women in country music. From her homage to the originators, Mother Maybelle Carter and the Carter Family (via her cover of “Keep On The Sunny Side”) through a new interpretation of her very first single, “I’m A Honky Tonk Girl”, Loretta Lynn acknowledges her role in the continuum of American country music while her duets with Reba McEntire and Carrie Underwood (“Still Woman Enough”), Margo Price (“One’s On The Way”) and Tanya Tucker (“You Ain’t Woman Enough”) find her sharing the musical torch with some of the brightest lights and biggest stars in contemporary pop-country. The album premieres 13 new Loretta Lynn recordings, intimate and electrifying performances of a career-spanning selection of songs illuminating different aspects of her repertoire.


Painted Shrines – Heaven and Holy LP (Woodsist)
Jeremy Earl (Woods) and Glenn Donaldson (Skygreen Leopards, The Reds, Pinks & Purples) met sometime in the mid-oughts and bonded over a love of tambourines and DIY sounds. They shared many stages since, and their first serious collaboration was on the 2011 Woods album Sun & Shade. Around 2018, Earl was restless in upstate NY and accepted an invite to record in Donaldson’s studio in an undisclosed rural coastal town in Northern California. In a week they emerged with nearly an album’s worth of hazy folk-rock and psych-pop with touches of more outré lo-fi noise. Jeff Moller (The Papercuts) added bass, and they put the finishing touches on during quarantine. Heaven And Holy ebbs and flows like coastal fog between songs and dreamy instrumentals, splitting the difference between The Clean’s Unknown Country and The Byrds’ Fifth Dimension.

Chad VanGaalen – World’s Most Stressed Out Gardener CD/LP+ MP3 (Sub Pop)
2020 was a terrible year for gardening. It was terrible for peppers, it was terrible for tomatoes, it was terrible for the condition of the soul. But Chad VanGaalen somehow raised a garden all the same: carrots and sprouts and broccoli and a revivifying new album, all of them grown at home. He likes to eat directly off the plant, he says – “I get down on my knees and graze. It’s nice to feel the vegetables in your face” – and the 13 songs on World’s Most Stressed Out Gardener were harvested with just such a spirit: in their raw state, young and vegetal, at the very moment, they were made. What that means is that the Calgary songwriter’s new album is a psychedelic bumper crop. A collection of tunes that does away with obsessiveness, the anxiety of perfectionism, in favor of freshness and immediacy – capturing the world as it was met while recording alone at home over a period of years. “Don’t overthink it,” VanGaalen told himself again and again, despite the push/pull love/hate of his relationship with songwriting. “I’m always trying to get outside of the song – but then I realize I love the song.” This is a record that gleams with VanGaalen’s musical signatures: found sound, reverb, polychromatic folk music that is by turns cartoonish and hyperphysical – like ultra-magnified footage of a virus or a leaf.

Chris Cornell – No One Sings Like You Anymore CD/LP (A&M)
A posthumous collection of ten cover songs which Chris Cornell personally selected and sequenced to celebrate artists and songs that inspired him. Recorded by Cornell in 2016, the album, which is his last fully completed studio album, features his renditions of John Lennon’s “Watching The Wheels”, Ghostland Observatory’s “Sad Sad City”, Harry Nilsson’s “Jump Into The Fire”, Carl Hall’s “You Don’t Know Nothing About Love”, Electric Light Orchestra’s “Showdown”, Terry Reid’s “To Be Treated Rite”, Lorraine Ellison’s “Stay With Me Baby” (originally released for HBO’s show Vinyl), “Get It While You Can”, popularized by Janis Joplin, “Patience” originally by Guns N’ Roses, and a new studio recording of “Nothing Compares 2 U”, written by Prince.

Lana Del Rey – Chemtrails Over The Country Club CD/LP (Interscope)
Chemtrails Over the Country Club marks Lana Del Rey’s sixth studio album and follow-up to 2019’s Norman F**king Rockwell. Del Rey spoke about the project in Interview Magazine, “From the top, we knew what Norman was. But with Chemtrails, it was like, ‘Is this new folk? Oh, god, are we going country?’” [The deluxe CD box set edition includes a 12-page photobook, six lithos, and an embroidered iron-on patch.]

Guided By Voices – Propeller [Reissue/1992] CD/LP (Scat)
Propeller was the fifth album by Guided By Voices, and was intended to be the group’s last. Released as a limited edition of 500 LPs in 1992, the album featured handmade covers and blank labels to keep expenses as low as possible. Their other albums hadn’t sold much, why would this one? Robert Pollard had a family to support and his musical aspirations had not exactly been a boon to their bank account. As fate would have it, the band wound up releasing an album chock full of gems Pollard had stockpiled, and for the first time sounded distinctly like the band that fans have since come to love. Propeller also marks the return of Tobin Sprout to the GBV fold, along with an increased songwriting presence.

Mint Julep – In A Deep And Dreamless Sleep CD/LP (Western Vinyl)
Created slowly over a years-long span that encompassed the recording of 2019’s Stray Fantasies, wife and husband duo Hollie and Keith Kenniff deliver In A Deep And Dreamless Sleep, a distinctly hazier chapter of their technicolor pop venture Mint Julep. Where the former album bore a crystalline latticework of defined pop structure, the latter blunts the sharpness and softens the glare, striking a balance between songcraft, and Hollie’s solo material, as well as Keith’s output as Goldmund. In A Deep And Dreamless Sleep assumes a more aerated form, exuding a heavy fog of shoegaze sensibility, though the infectious pop know-how of its precursor remains firmly intact.

Dizzee Rascal – Boy In Da Corner [Reissue/2003] 2xLP (XL)
English rapper/producer Dizzee Rascal’s brash, bold debut album, Boy In Da Corner sounded like the future when it won the Mercury Prize in 2003, and it still does today. Often teetering on the brink of either cracking a smile or bursting into tears while delivering his boastful, wistful, and dread-filled rhymes, the hormonally charged voice of East London’s Dizzee Rascal is instantly recognizable. It seems as though Dizee was rewriting the UK underground rulebook, slipping from hip hop into garage with ease. With prototype distorted electronic kid 606 beats, to an array of distorted beats and wobblying basslines, grime was here to stay

Green Day – Insomniac: 25th Anniversary 2xLP (Reprise)
This 25th anniversary double vinyl reissue includes a bonus LP (with etched B-side) featuring eight rare or never previously released live tracks from the Prague stop of the Insomniac world tour on March 26, 1996 plus cover art printed on prismatic silver foil. The Berkeley pop-punks’ 1995 album served as the band’s highly anticipated fourth release overall and follow-up to their breakthrough major label debut Dookie from the year prior. With Insomniac the group took everything that was great about its predecessor, i.e. its simplicity, hooks, lack of pretension and disdain for authority, and upped the ante with darker motifs and heavier songs. It resulted in yet another quality collection of uncompromising punk rock with breakneck drumming, pounding bass, catchy riffs and snot-nosed vocals.

Karmina Walker – Waking The Dreaming Body CD/LP/CASS (Keeled Scales)
Tucson artist Karima Walker has long nurtured a duality within her work as a musician, developing her own sonic language as a sound designer in tandem with her craft as a singer/songwriter. The polarity within her music has never been as articulately explored, or imbued with as much intention, as on her new album, Waking The Dreaming Body.