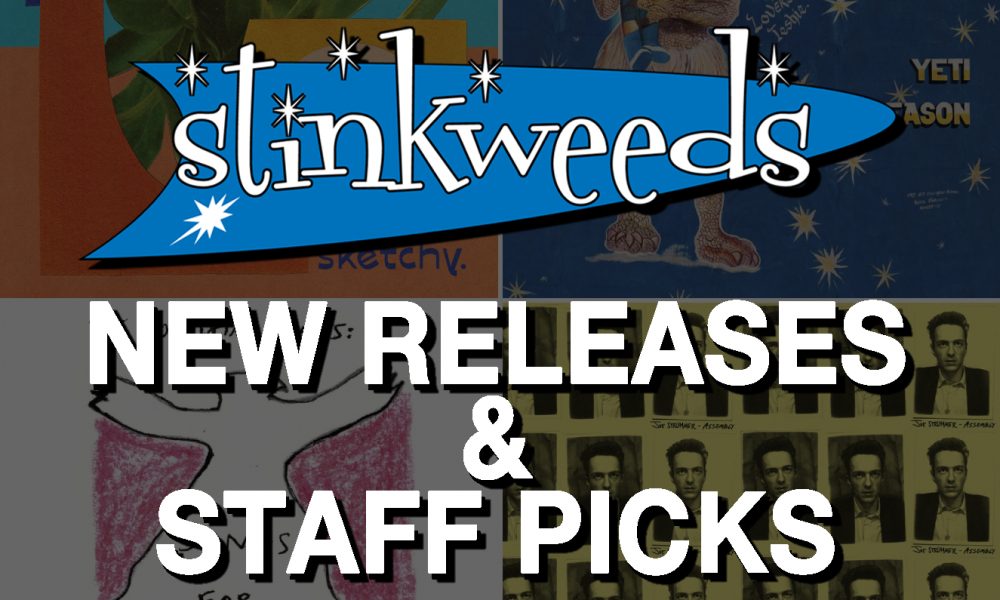 Tomahawk – Tonic Immobility CD/LP (Ipecac)
On their 20th anniversary, Tomahawk finally return with their fifth full-length album, Tonic Immobility. The guys – guitarist Duane Denison (the Jesus Lizard, Unsemble), vocalist Mike Patton (Faith No More, Mr. Bungle, Fantômas), drummer John Stanier (Helmet, Battles), and bassist Trevor “field mouse” Dunn (Mr. Bungle, Fantômas) – survey where they’ve come from only to leap ahead once more. “Tonic Immobility is almost a summary of everything we’ve done,” states Duane. “There are references to previous things spread throughout the album as well as new territory. On any of our albums, you’ll find those faster, high energy, abrasive, and dissonant songs. You’ll also find the slower, atmospheric, groove- and tension-based moments too. There’s always been a touch of, dare I say, Latin music in the form of Bossa Nova or flamenco-influenced guitar. All of those things appear on this record.” Indie exclusive version available.

El Michels Affair – Yeti Season CD/LP (Big Crown)
Fresh off of their 2020 offering Adult Themes, El Michels Affair is back with a new full-length release. Titled Yeti Season, this newest album has everything we’ve come to expect from EMA’s patented cinematic style of instrumental soul music. Where Adult Themes inspired a soundtrack to an imaginary film, Yeti Season brings us to a different place in time—with new inspirations. Taken with Turkish-styled funk and an almost Mumbai-esque take on soul, El Michels Affair offers us a different kind of drama and imagination with Yeti Season. Indie exclusive version available.

The Antlers – Green To Gold CD/LP (ANTI-)
Perhaps what distinguishes Green To Gold from the rest of The Antlers’ canon is its, well, sunniness. Conceived and written almost entirely in the morning hours, Green To Gold is the band’s first new music in nearly seven years, and easily their most luminous to date. “I think this is the first album I’ve made that has no eeriness in it,” Peter Silberman asserts. “I set out to make Sunday morning music.” Unlike other Antlers albums, Silberman didn’t feel compelled to turn a human experience into a circuitous mythology. He chose a more direct approach: documenting two years in his life, without overthinking or obscuring what the songs were about. “Most of the songs on Green To Gold are culled from conversations with my friends and my partner. It’s less ambiguous about who’s speaking and who’s listening,” says Silberman resolutely. “I think the shift in tone is the result of getting older,” Silberman adds. “Green To Gold is about this idea of gradual change,” he sums up. “People changing over time, struggling to accept change in those they love, and struggling to change themselves. And yet despite all our difficulty with this, nature somehow makes it look easy.” Indie exclusive version available.

Tune-Yards – Sketchy CD/LP+MP3 (4AD)
Tune-Yards’ 2018 release I Can Feel You Creep Into My Private Life, was a self-reflexive question mark at the end of a decade of outspoken, polyphonic indie music. From 2009 to 2018, Tune-Yards (both Merrill and her partner and collaborator Nate Brenner) released four critically acclaimed albums, travelled the world relentlessly to play live shows, and composed the psychedelic score to Boots Riley’s surrealist cinematic masterpiece Sorry To Bother You. “We had really been non-stop hustling,” Merrill reflects. “And when we’re hustling, we’re complicit in all of the systems that I really don’t believe in.” Interrogating these systems and her role within them had left Merrill feeling heavy with guilt and grief and lost about how to move forward as a musician. But then she began to rediscover the joy in making music. Inspired by the Beastie Boys Book and Questlove’s Creative Quest, Merrill and Nate began jamming daily for hours in their home rehearsal studio “like athletes.” They ditched computer screens for live instruments (Merrill on drums, Nate on bass) and before long full songs started to emerge. Unlike the lyrical introspection of their previous outing, on the project’s fifth studio album Sketchy, Merrill balances self-inspection and reflection with bombastic rallying cries, reminiscent of the furious tones of early days Tune-Yards. The result is a colorful and joyous record with lyrics that cut to the bone. [A limited indie store only exclusive vinyl pressing is also available.]

Citizen – Life In Your Glass World CD/LP (Run For Cover)
Citizen has always eluded definition. The Toledo, Ohio-based four-piece have been making dynamic, wide-ranging guitar music for over ten years, challenging expectations with each new album and refusing to fit neatly in a box. [A limited galaxy blue and green color vinyl pressing is also available.]

The Mountain Goats – Songs For Pierre Chuvin CD/LP+MP3 (Merge)
Surprise-released in April of 2020, Songs For Pierre Chuvin is the Mountain Goats’ first all-boombox album since 2002’s All Hail West Texas. “I dedicate this tape to everybody who’s waited a long time for the wheels to sound their joyous grind: may they grind us into a safe future where we gather once again in rooms to sing songs about pagan priests & hidden shelters, and where we see each other face to face,” says John Darnielle. “Hail the Panasonic! Hail the inscrutable engines of chance! Hail Cybele!”

Neil Young – Young Shakespeare CD/LP/LP+CD+DVD (Reprise)
Just two months after the release of his seminal album After The Gold Rush, Neil Young played a solo show at The Shakespeare Theater in Stratford, CT on January 22, 1971. The show was filmed and recorded, and the concert shown on German TV later in 1971. In 2020, while Neil and his team were reviewing his Archive for future projects, Neil revisited the 16mm film and audio recording of this show that had been preserved in the Archive for almost 50 years. Piecing together the tapes and footage, Neil realized that he had the full concert – the film of which is the earliest live footage of Neil performing that is known to exist. Young Shakespeare is “one of the purest sounding acoustic performances we have in the Archive” states Neil Young, and is released almost exactly 50 years after the original performance.

Ben Howard – Collections From The Whiteout CD/2xLP (Republic)
British singer-songwriter Ben Howard – whose music has drawn comparisons to Nick Drake and John Martyn – returns with his fourth studio album, Collections From The Whiteout. Produced with Aaron Dessner (The National, Sharon Van Etten, Taylor Swift), it marks the first time that the BRIT Award winner and Mercury Prize nominee has opened his studio doors to an outside collaborator.

Loney dear – A Lantern And A Bell CD (Real World)
New album from Loney dear, aka singer/songwriter/multi-instrumentalist Emil Svanängen. Real World label founder Peter Gabriel says: “Sad soulful melodies that create space in your head that fill with memories, dreams and tenderness. I am very proud that we are working with such a gifted songwriter. When you’re isolating, what better than to be wrapped up in these beautiful imaginative constructions — the work of a master.”  [Vinyl edition due April 30.]

Serpentwithfeet – Deacon CD/LP+MP3 (Secretly Canadian)
Serpentwithfeet is not only imagining but exploring a world wherein Black love is paramount. His new album, Deacon, is “a study rather than a story,” delving into Black, gay love and the tenderness present in the best companionships, romantic or otherwise. Fully self-actualized and more devoted than ever to personal fulfillment, Deacon highlights his growth as a songwriter, which he credits to taking a more straightforward approach to expression. Spending time with pop songwriters and observing how they traverse language encouraged serpent to take more risks lyrically, resulting in more purity.

Spoon ‎– Gimme Fiction [Reissue/2005] CD/LP/2xCD/2xLP+MP3 (Matador)
Spoon make some of the catchiest, most confident rock ‘n’ roll of any group around. Their fifth full-length is nothing short of a dizzying, soulful masterpiece, easily the most expansive work in their career. Gimme Fiction is a sprawling, exhilarating, filler-free album of keenly focused artistic vision and ambition. [The deluxe anniversary edition includes the 2015 remastered version of the original album, a second disc with 12 previously unreleased demos, a digital download of nine bonus tracks, and a full-color book containing photos and an extensive oral history of the making of the album by The A.V. Club’s Sean O’Neal. A limited red and white split-color vinyl pressing is also available.]

Xiu Xiu – OH NO CD/2xLP (Polyvinyl)
For nearly two decades, Xiu Xiu has made music for the moments when life’s harsh realities meet its existential mysteries. A profound sense of emotional vulnerability weaves its way throughout the dozen albums the group has made, but also a spirit of openness and experimentalism as they peer into the sonic unknown, creating moments of catharsis by harnessing bursts of noise and other uncommon sounds. OH NO, the group’s newest album, is an album of duets, with Jamie Stewart sharing the spotlight with an array of guests who have made an impact on him personally and musically. Sharon Van Etten’s tentative musings open the album, and from there vocalists from across the musical spectrum, including Circuit des Yeux’s Haley Fohr, Liz Harris, Alice Bag, Chelsea Wolfe, Owen Pallet, and Twin Shadow’s George Lewis Jr., all drift into Xiu Xiu’s distinctive soundworld. [A limited-edition solid cream/solid scarlet color vinyl pressing is also available.]

The Clean ‎– Unknown Country [Reissue/1996] LP+MP3 (Merge)
The Clean ‎– Mister Pop [Reissue/2009] LP+MP3 (Merge)
In 1978, The Clean were the seeds of New Zealand punk. In the years since, they have carved out a big sandbox for everyone to play in, and their influence resonates not only in NZ but around the world. A group that thrives when free of expectations, The Clean’s Robert Scott, Hamish Kilgour, and David Kilgour are, as Tape Op described, “a casually wonderful band.”

Panic! At The Disco ‎– Death Of A Bachelor [Reissue/2015] LP (Fueled By Ramen)
Limited silver color vinyl reissue of the fifth studio album by Panic! At the Disco – their first as a solo project.

Steep Canyon Rangers – Arm In Arm LP (Yep Roc)
The Asheville, North Carolina’s Grammy winner’s new album, Arm In Arm, finds the band in a unique position where their sound is much more Americana than their bluegrass origins. Produced by Brandon Bell (Zac Brown, John Prine) and featuring Oliver Wood of The Wood Brothers and Michael Bearden (music director for Michael Jackson), the Rangers continue to hone their craft with unlikely collaborators while developing a sound that is uniquely their own.

Ennio Morricone – “Exorcist II: The Heretic” (Florescent Green) (Jackpot Records)
1977 original soundtrack LP for the horror sequel – music composed by Ennio Morricone. In one of his first forays into big budget Hollywood, Ennio Morricone handed in one of his weirdest, eeriest scores. From the beautiful to the absolutely demented, while still playing in the same sandbox. Once you get to the deranged Satanic prog rock of “Magic And Ecstasy,” it hits you: this is the craziest we’ve ever heard Morricone. And it’s amazing.

Grandaddy – The Sophtware Slump … On A Wooden Piano LP (Dangerbird)
Modesto, CA’s influential indie-rock group Grandaddy celebrates the 20th-anniversary of their classic second LP, 2000’s The Sophtware Slump with a brand-new solo piano recording of the album by principal songwriter Jason Lytle. The candid arrangements reveal new layers of meaning embedded in The Sophtware Slump’s melancholy and touching vision of the future. With a meticulous yet scruffy sound that continues to draw comparisons to a post-millennial OK Computer – and which Pitchfork called a “sad, quaint, low-key Y2K-era classic” – The Sophtware Slump, now heard as a solo piano album, is a chance to let the songwriting shine. This is not a record made up of demos or rough sketches; it is a shadow sibling to a record that inspired a generation in the earliest days of the 21st century.  Available on indie exclusive clear vinyl.