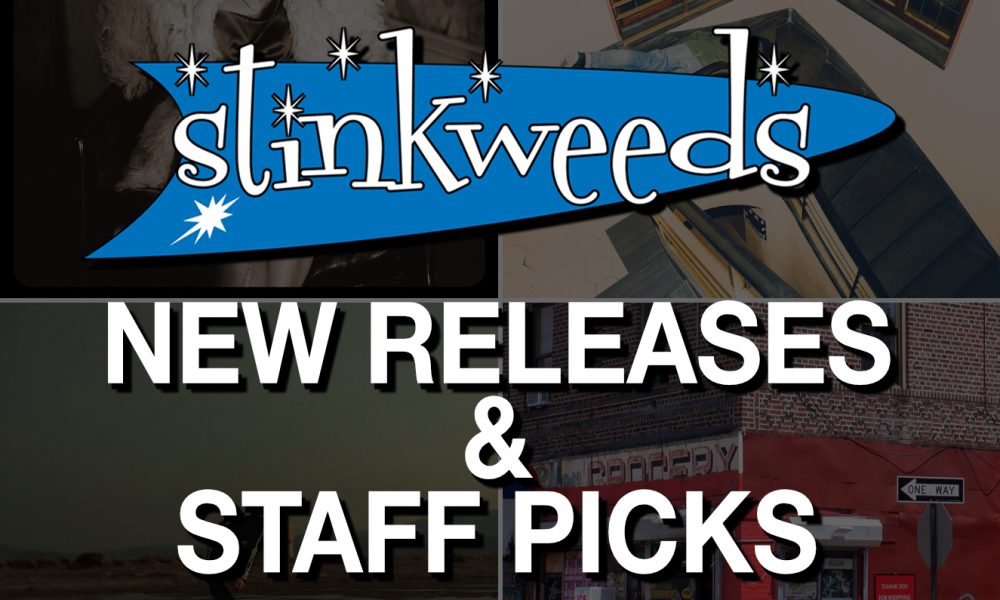 Phoebe Bridgers – Copycat Killer 12″ (Dead Oceans)
SUPER LIMITED!! Copycat Killer is a 12″ featuring 4 exclusive new versions of songs from Phoebe Bridgers’ wildly acclaimed Punisher. Collaborating with arranger Rob Moose (Sufjan Stevens, The National, Bon Iver, Vampire Weekend, Jay-Z), these are brand new orchestral arrangements of the songs Kyoto, Savior Complex, Chinese Satellite and Punisher, all given a luscious revamp that is sure to delight any fans of Phoebe’s album and serve as perfect gateway for new listeners into what makes her one of the most special artists of 2020 and beyond. Available on black and mountain blast colored vinyl.

The Black Keys – Delta Kream CD/2xLP (Nonesuch)
Limited edition indie exclusive vinyl version available while supplies last. The Black Keys follow-up 2019’s Let’s Rock with their tenth studio album, Delta Kream. The record celebrates the band’s roots, featuring eleven Mississippi hill country blues standards that they have loved since they were teenagers, before they were a band, including songs by R.L. Burnside and Junior Kimbrough, among others. The duo recorded Delta Kream at Auerbach’s Easy Eye Sound studio in Nashville; they were joined by musicians Kenny Brown and Eric Deaton, long-time members of the bands of blues legends including R. L. Burnside and Junior Kimbrough. The album takes its name from William Eggleston’s iconic Mississippi photograph that is on its cover. The full circle Delta Kream release is a fitting tribute to these architects of hill country blues and further recognition of their enduring contributions to American music. [A limited-edition indie store exclusive vinyl pressing is also available.]

St. Vincent – Daddy’s Home CD/LP (Loma Vista)
Limited edition indie exclusive vinyl version available while supplies last. Daddy’s Home, the sixth album from St. Vincent, is the latest facet of an ever-evolving artist regarded by many as the most consistently innovative and intriguing presence in modern music. Warm Wurlitzers and wit, glistening guitars and grit, with sleaze and style for days. Taking you from uptown to downtown with the artist who makes you expect the unexpected. “Daddy’s Home collects stories of being down and out in downtown NYC,” Clark notes. “Last night’s heels on the morning train. Glamour that’s been up for three days straight.” The album was first teased in late 2020 when Clark completed an interview with Mojo. “I felt I had gone as far as I could possibly go with angularity,” she said of the album’s creation process, which she mentioned represents a “tectonic shift.” She continued with: “I was interested in going back to the music I’ve listened to more than any other – Stevie Wonder records from the early ‘70s, Sly And The Family Stone. I studied at the feet of those masters.”

Damien Jurado – The Monster Who Hated Pennsylvania CD/LP (Maraqopa)
On The Monster Who Hated Pennsylvania, Damien Jurado gathers up ten stories of people determined not to be broken by their dire circumstances. The world is a liar, the stars are a must, he sings over brushed drums, a circling bassline, and acoustic guitar on “Helena”, which opens his 17th album, the first release from Damien’s own Maraqopa Records. Dire circumstances have long been fixtures of Jurado’s songs, which are filled with ghosts, killers, cruel lovers, and the occasional UFO cult or false messiah. But here, the scenes are earthy, drawn from ordinary but no less immense calamities: hurricanes moving toward town, strained connections, amnesiacs in the front yard.

Current Joys – Voyager CD/LP+MP3 (Secretly Canadian)
Voyager, the seventh LP from Current Joys, rattles with the live-wire feeling that’s thrummed through all of Rattigan’s previous releases: quavering, scream-itself-hoarse vocals and self-interrogation via song. But here, that bristling, sentimental rock ‘n’ roll cacophony is overlaid with a soundtrack orchestra guiding it along. It’s an odyssey, a grand-sounding journey of self-discovery spread across sixteen tracks. Part ekphrasis, part personal, it’s Rattigan learning new ways to understand his own feelings and identity while inspired by the highly stylized, striking storytelling of filmmakers like Alfred Hitchcock, Terrence Malick, Agnès Varda, and Andrei Tarkovsky.

Sons Of Kemet – Black To The Future CD/2xLP (Impulse!)
Black To The Future finds the UK-based jazz quartet at their most dynamic – showcasing harmonically elegant arrangements and compositions, coupled with fierce, driving material that will be familiar to initiated fans. This album features prominent UK vocalists and a strong emphasis on lush compositions and arrangements. Guest artists include Kojey Radical, Moor Mother, and more.

Tokimonsta – Oasis Nocturno CD/2xLP (Young Art)
Over the last 10 years, Grammy-nominated producer/DJ Tokimonsta has made an indelible mark on electronic music, and on pop culture at large. Toki’s journey gained global attention after having starred in Netflix series Explained. She was diagnosed with a rare, potentially fatal disease known as Moyamoya. After an astonishing recovery and monumental few years, her last critically acclaimed release, Lune Rouge, was nominated for a Grammy Award as 2019’s Electronic Album of the Year.

Ryan Adams – Wednesdays LP (Pax Americana)
Recently released on CD – now available on vinyl. Ryan Adams’ first album in three years, Wednesdays, is purely raw, vulnerable, and honest. The music takes you on a deep dive exploring the complex heart of Ryan Adams, through a journey of love, pain, and heartbreak. The album so effortlessly creates an immediate connection with anyone who has ever experienced love lost – the type of love that haunts you in quiet places of your mind. While the lyrics walk you through the vast emotional layers of grief, they also remind you of the rich memories of a love that will forever remain a part of you.

Aesop Rock – Long Legged Larry 7” (Rhymesayers)
Green color vinyl pressing. Here’s some things you should know about Larry: His legs are long. His heart is true. His heroics are unmatched. Leaky faucet? Stolen bike? Trouble with your math homework? Fear not! Larry is here and he’s got what it takes to ease your troubles. We can’t keep this green guy away from a good cause! The song “Long Legged Larry” details three instances where Larry’s valiance shines.

John Andrews & The Yawns – Cookbook LP (Woodsist)
John Andrews is picking flowers from each corner of his life and presenting you with an unusual bouquet. His imaginary band The Yawns are back. Third time’s a charm. In hockey terms, they call it a ‘hat trick’. Three years in the making and we have Cookbook, the third, and most colorful record from your favorite New Hampshire based craftsman. The lyrics are simple and endearing, inspired by mid-century love songs. His inspirations are across the board. If his subconscious was a bootleg taper, life would be the show. At any rate, it doesn’t sound like a record made in New Hampshire, but make no mistake, this is a dyed-in-the-wool Yawns record, refreshingly straightforward yet full of character. It’s less of a crowded honky tonk, and more of an empty, poignant speakeasy.

The Get Up Kids ‎– Four Minute Mile [Reissue/1997] LP (Doghouse)
Vinyl reissue of the debut album by the Kansas City, Missouri emo/punk band. Four Minute Mile was well-received, if not a major commercial success. The album helped the band develop a national fanbase, as well as garnering a bidding war over the band from several major labels, including Geffen Records, Sub Pop Records and Mojo Records.

Juan Wauters – Real Life Situations LP (Captured Tracks)
Transparent ruby color vinyl. References to radio abound on Real Life Situations, and with good reason: the album spans genres, narrators, languages, and perspectives with the ease of spinning a rotary knob. Until recently, Wauters had viewed his solo project as just that – a singular expression of his artistic vision. A trip through Latin America while recording his last album, however, laid the groundwork for a different approach. Inviting local musicians to contribute to the songs he was working on produced a collection unlike any of his previous work, infused with the musical traditions of each country he’d visited.

Matthew E. White and Lonnie Holley – Broken Mirror: A Selfie Reflection LP (Spacebomb)
Magenta color vinyl pressing. Broken Mirror: A Selfie Reflection is a timely callout to the power of collaboration, of kindred spirits connecting in crowded rooms. More important, though, is this collision of two profoundly Southern artists, meeting to shed expectations of generation and genre, scene and situation and exchange truth, wisdom, and energy.

Juliana Hatfield – Blood CD/LP+MP3 (American Laundromat)
Blood is Juliana Hatfield’s 19th solo studio album of originals, and a deep dive into the dark side. The album is a brutal and critical look at modern human psychology and behavior, at personal and societal sickness. “I think these songs are a reaction to how seriously and negatively a lot of people have been affected by the past four years,” says Juliana. “But it’s fun, musically. There’s a lot of playing around. I didn’t really have a plan when I started this project.” “Chunks” and “Had A Dream” are gritty and abrasive while “Mouthful Of Blood” and “Gorgon” are groovy and ultra-melodic. All of it is eminently hummable and thought-provoking. Sophisticated but catchy. Challenging but danceable. “I always love coming up with melodies and then trying to fit words into them-it’s like doing a puzzle,” says Juliana. “And I always find places to use the Mellotron flutes and strings, on every album, because those sounds are so beautiful to me. They are a nice counterpoint to the damaged lyrical content.”

Various Artists – Rust Side Story Vol 24 LP (Numero)
The third installment of Numero’s ode to lowrider souldies, Rust Side Story compiles highly sought after sweet soul singles from the Buck Eye State. Prepare for a low and slow ride from Youngstown to Dayton, Cleveland to Columbus, Toledo to Cincinnati, all soundtracked with silky falsettos and dreamy harmonies.