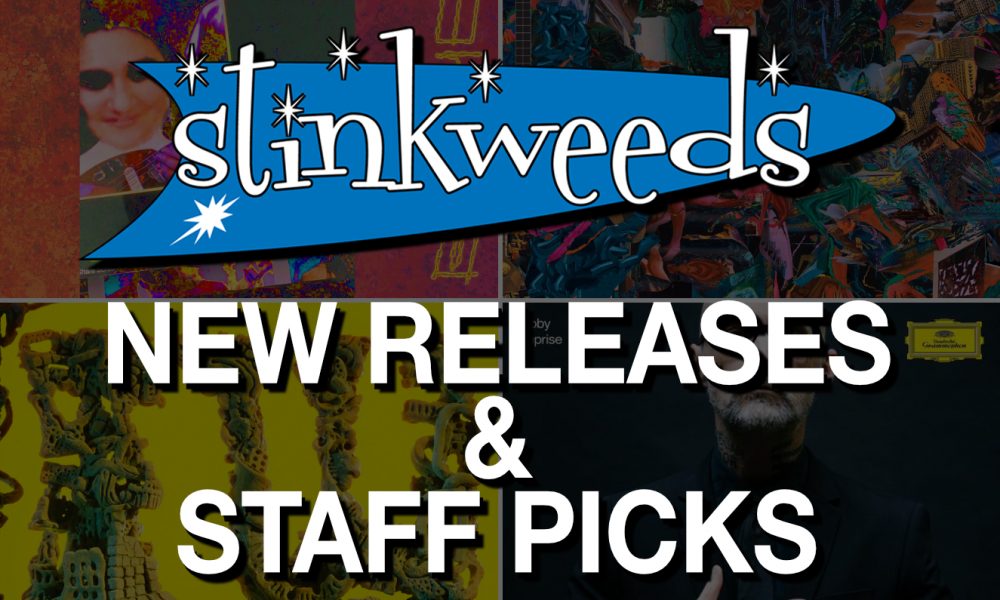 Bachelor – Doomin Sun CD/LP/CASS (Polyvinyl)
Bachelor, the new project from Melina Duterte (Jay Som) and Ellen Kempner (Palehound), is not a band, it’s a friendship. In January of 2020, the duo packed the entirety of Duterte’s recording equipment into two cars and headed to a rental house in Topanga, CA where over the course of two weeks, they wrote and recorded their debut album Doomin’ Sun. In this space, Kempner and Duterte hybridized their individual songwriting talents, producing a collection that slips between moods with ease and showcases their lyrical prowess.

PJ Harvey – The Peel Sessions 1991-2004 LP (Island)
Reissue on vinyl of the 2006 collection of PJ Harvey sessions with the late BBC Radio 1 DJ John Peel, spanning recordings from the start of her career in 1991 up to 2004. Originally released two years after Peel’s death in 2004, the record came with a tribute message from Harvey in the liner notes which read, “More than I would ever care to admit for fear of embarrassment to both sides, but I sought his approval always. It mattered. Every Peel Session I did, I did for him. It is with much love that I chose these songs, in his memory. A way of saying ‘Thank You,’ once more. Thank You, John.”

Fountains of Wayne – Welcome Interstate Managers LP (Real Gone Music)
Limited edition red vinyl pressing. It’s the most popular album by one of the greatest power pop bands of all time…and it’s never seen a widespread vinyl release. Welcome Interstate Managers was hailed a classic from the day it came out in 2003, and featured Fountains of Wayne’s biggest hit with “Stacy’s Mom.” The song craft and lyrical wit of Chris Collingwood and the late, great Adam Schlesinger have never been sharper; there’s not a bad song on this record and lot of them (e.g. “Bright Future in Sales;” “Hackensack”) rise to the same lofty perch as “Stacy’s Mom.” Real Gone Music presents this landmark album in a 2-LP set pressed in red vinyl at Gotta Groove Records, and housed inside a gatefold jacket with two printed inner sleeves featuring lyrics. Also included as a bonus track: the non-LP b-side to the “Stacy’s Mom” single, “Elevator Up!” One of the 21st century’s greatest rock albums.

Lou Barlow – Reason To Live CD/LP (Joyful Noise)
Available on indie exclusive blue LP, while supplies last. After decades on the road and the never-ending hustle of life as an artist, Lou Barlow has tapped into a new confidence in the chaos. In 2021, the concept of balance feels particularly intimidating. Now more than ever, it’s clear life isn’t just leveling out a pair of responsibilities. Instead, we’re chasing after a flock of different ideals with a butterfly net. On Barlow’s new solo album, Reason to Live, he has come to an understanding of that swirl rather than trying to contain it.

Limited edition Silver Anvil version available while supplies last. Freewheeling six-headed freak-rock movement King Gizzard & The Lizard Wizard return with 17th album “L.W.” Serving as both a standalone work and a companion piece to 2020 predecessor K.G., L.W. sees the Melbourne based innovators produce a truly original album. As the band enter their second decade, the creative future of this most 21st century of outfits only promises to be bolder, madder and more imaginative than ever.

King Gizzard and the Lizard Wizard – Teenage Lizard LP (We Are Busy Bodies)
Available on ltd edition pink and clear vinyl, while supplies last. Ltd to 1,000. King Gizzard & The Lizard Wizard launched a Bootlegger Series with their 2017 release, Polygondwanaland, that saw a ton of really unique formats. When they announced a 2020 version with multiple options, We Are Busy Bodies decided it wanted to participate. Having seen the band many times and owning all of their records, creativity was key. The We Are Busy Bodies version of Teenage Gizzard features a pink and clear colour version of the album along with a secret 7″ featuring different live versions of two songs recorded at four different concerts.
Alex Somers – Siblings 1 and 2 LP (Krunk)
Musician, composer, producer and visual artist Alex Somers releases his debut album Siblings in tandem with his other debut album Siblings 2. Two double albums housed in a beautiful single sleeves, Siblings and Siblings 2 have been a long time coming, being written between 2014-2016. Siblings and Siblings 2 have 13 hauntingly beautiful, impressionistic tracks apiece, the records draw on the composer’s main musical interests – film composition, ambient, post-classical, post-rock and electronica.

Maserati – Passages LP (Temporary Residence)
Maserati – Rehumanizer LP (Temporary Residence)
Maserati – VII LP (Temporary Residence)
Vinyl reissues, available in limited edition colored versions, while supplies last.
Har Mar Superstar – Roseville CD/LP (Love Online)
Welcome to Roseville, the 7th studio album by Har Mar Superstar. Sean Tillmann’s latest collection of songs is a career-defining culmination of life and musical experiences that were heavily influenced by 70s AM gold artists including Todd Rundgren, Elton John, Carole King, David Bowie, Paul McCartney, Genesis, Hall and Oates, Meat Loaf, Dory Previn, and ELO. The album came together in the late months of 2020 and is the first true collaborative effort of the whole touring band. It was distance recorded by all of the members in their home studios and the band’s home base, Mid City Studio, in Minneapolis. It has been described as an “existential homecoming” that chronicles Tillmann’s return to life as a Minnesotan over the last 5 years.

Moby – Reprise CD/LP (Deutsche Grammophon)
Available on limited edition gray LP while supplies last. Moby’s eclectic career has cast him in the roles of electronic dance music pioneer, singer/songwriter, producer, activist, and restaurateur, but for his latest venture he presents his music in a whole new light. Together with Deutsche Grammophon, he is releasing an album of his best-known tracks in stunning new arrangements for classical instruments – featuring Moby himself and a stellar lineup of collaborators from across the musical spectrum. Always a daring and imaginative thinker, Moby’s first classical collaboration happened in October 2018, when he performed a selection of his songs alongside the LA Phil with conductor and friend, Gustavo Dudamel. This was the inspiration for the current project, which features not only full orchestral versions but new electronic arrangements, as well as sophisticated smaller-scale acoustic interpretations.

The Beths – Jump Rope Gazers LP (Carpark)
Everything changed for Auckland, New Zealand’s The Beths when they released their debut album, Future Me Hates Me, in 2018. They quit their jobs, said goodbye to their hometown, and devoted themselves entirely to performing across the globe. Songwriter/lead vocalist Elizabeth Stokes worked on The Beths’ second LP, Jump Rope Gazers, in between these intense periods of touring. Like their earlier music, the album tackles themes of anxiety and self-doubt with effervescent power pop choruses and rousing backup vocals, zeroing in on the communality and catharsis that can come from sharing stressful situations with some of your best friends. Their most emotive and heartfelt work to date, Jump Rope Gazers stares down all the hard parts of living in communion with other people, even at a distance, while celebrating the ferocious joy that makes it all worth it.

Caamp – Live From Newport Music Hall 12″ (Mom+Pop)
Caamp’s ‘Live from Newport Music Hall‘ album was recorded during their 3- night run leading into New Year’s Eve. It features 5 live songs that capture the energy of the band’s electric live set. The tracklist includes a fan-favorite ‘No Sleep’ which amassed 16 million streams and ‘Peach Fuzz’ which reached #1 at AAA radio. In 2019, Caamp released their chart-topping album, By and By which was featured in Billboard, NPR, Rolling Stone and more. Caamp made their TV debut on Jimmy Kimmel Live! and performed on CBS This Morning Saturday. On the heels of the album release, Caamp hit the road on their sold out North American Fall Tour and performed at numerous festivals and venues worldwide. Live from Newport Music Hall captures the special moment where Caamp returned back to their hometown city of Columbus, bigger than they’ve ever been before. Available on indie exclusive colored vinyl.
Dungen – Ta Det Lugnt LP Reissue (Subliminal Sounds)
Exclusive Special Deluxe Limited Edition Psychedelic Multicolor Splatter Vinyl edition. Presented in its original 2 x LP format and gatefold sleeve.
Daniel Davies – Spies 12″ (Sacred Bones)

Have you ever felt like you’re being watched? Have you felt unseen eyes staring at you, monitoring your every move? Composer and guitarist Daniel Davies reflects on this familiar paranoia on his new EP, Spies. Across its five stirringly atmospheric tracks, the frequent John Carpenter collaborator evokes the tingle you get on the back of your neck when you sense you’re under surveillance – a feeling some psychologists have dubbed the “psychic staring effect.  The songs for Spies were composed in the fall and winter of 2020, in the depths of pandemic lockdown. Working in isolation in his L.A. studio, Davies composed the five tracks entirely alone. With no collaborators, his gaze turned inward, and the songs feel intimate and intense.

Green Day – Nimrod LP reissue (Reprise)
LP reissue.  Retrospectively, Nimrod is noted for it’s musical diversity and experimentation, containing elements of folk, surf rock, and ska.
Travis – The Boy With No Name LP+7″ (Craft Recordings)
Limited vinyl LP pressing including bonus 7″ single, housed in a gatefold jacket. Having covered so much ground since their debut release ten years prior, 2007’s The Boy With No Name was Travis’ most eclectic album to date. Praised by the BBC for being the work of a band who “can afford to take risks.” Featuring the singles “Closer,” “Selfish Jean,” and “My Eyes.” This first vinyl reissue comes with a bonus 7″ of “Sailing Away,” a song originally hidden as a bonus track on the album’s CD release.