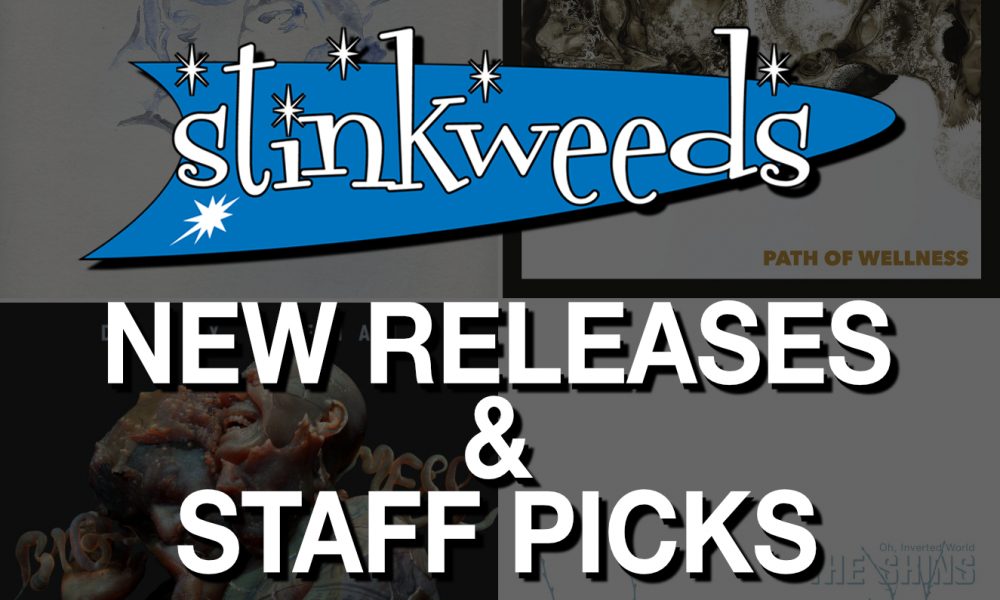 Portugal. The Man – Oregon City Sessions CD/2xLP (Approaching AIRballoons)
Archival release from the Alaskan indie rock/psychedelic rock band – a snapshot of young raw talent before they won awards, before they sold millions of records, before they headlined festivals. Just a couple kids from Alaska wanting to travel the world and play music.

The Shins – Oh, Inverted World [Reissue/2001] CD/2xLP+MP3 (Sub Pop)
Oh, Inverted World, the earth-shattering, indie-rock-redefining 2001 debut album by The Shins, is presented here in its finest form, dressed up all nice for its 20th birthday. The classic tunes get new life by way of a full remastering job under band leader James Mercer’s watchful eye, the art is given a little extra zest via a die-cut jacket and a classy inner sleeve, and the package is rounded off with a big ol’ booklet with vintage photos, handwritten lyrics, and more.

Arab Strap – As Days Get Dark LP (Rock Action)
Finally available on LP. “It’s about hopelessness and darkness,” says Aidan Moffat. “But in a fun way.” The Arab Strap frontman is speaking about the band’s 7th studio album and their first since 2005’s The Last Romance . The band who bought you the classic and legendary “The First Big Weekend” return with new music for the first time in 15 years. “It’s definitely Arab Strap, but an older and wiser one, and quite probably a better one.” The first track lifted from the new album ‘The Turning of Our Bones’ saw a much welcome return to form and proved very much that Arab Strap are back from the grave and ready to rave! As the band’s Malcolm Middleton told the Guardian newspaper when they profiled the band upon news of their return, “There’s no point getting back together to release mediocrity.”

Danny Elfman – Big Mess CD/2xLP (ANTI-)
Danny Elfman delivers his first solo album in thirty-seven years, titled Big Mess. Clocking in at 18 tracks, the sprawling, ambitious double album finds the Grammy and Emmy Award-winning composer breaking bold new ground as both a writer and a performer, drawing on a dystopian palette of distorted electric guitars, industrial synthesizers and orchestra in an effort to exorcise the demons brought about by four years of creeping fascism and civil rot. The songs on Big Mess combine both harmonically complex arrangements and simple high energy driving music with biting, acerbic wit as they reckon with the chaos and confusion of the modern world. [A limited-edition color vinyl pressing is available.]

Sleater-Kinney – Path Of Wellness CD/LP (Mom + Pop Music)
Sleater-Kinney’s follow-up to 2019’s The Center Won’t Hold is their first record to be recorded without Janet Weiss since the drummer joined the group in 1996. To round out the new record, Corin Tucker and Carrie Brownstein invited local Portland musicians to the studio. It is also their first self-produced album. [A limited-edition black opaque vinyl pressing is available.]

The Album Leaf – OST LP (Eastern Glow Recordings)
A collection of film works, features the full score of original music composed by Jimmy LaValle of The Album Leaf for the feature documentary, Ovarian Psycos. The 2016 film explores the origins of a women’s Latinx bicycle brigade in East Los Angeles, directed by Joanna Sokolowski and Kate Trumbull-LaValle.

Garbage – No Gods No Masters CD/2xCD/LP (Infectious Music/BMG)
Garbage – Shirley Manson, Duke Erikson, Steve Marker and Butch Vig – return with a new studio album, No Gods No Masters. “This is our seventh record, the significant numerology of which affected the DNA of its content,” says Manson. “The seven virtues. The seven sorrows and the seven deadly sins. It was our way of trying to make sense of how fucking nuts the world is and the astounding chaos we find ourselves in. It’s the record we felt that we had to make at this time.” Lead single “The Men Who Rule the World” is an incendiary indictment and call to arms, a typically powerful sonic display that sets the tone for the searing new record. A critique of the rise of capitalist short-sightedness, racism, sexism and misogyny across the world, the track is a forceful protest song and a clear statement of intent from a band who still believe in the power of dissent. [A limited-edition green color vinyl pressing, and deluxe CD version are available.]

Julian Lage – Squint CD/LP (Blue Note)
Hailed as one of the most prodigious guitarists of his generation, Julian Lage has spent more than a decade searching through the myriad strains of American musical history via impeccable technique and a spirit of infinite possibility. After notable Blue Note appearances on The Nels Cline 4’s Currents, Constellations (2018) and Charles Lloyd’s 8: Kindred Spirits (2020), the acclaimed Grammy-nominated artist makes his own Blue Note debut with Squint. Produced by Margaret Glaspy and Armand Hirsch, the dynamic 11-song set featuring nine originals showcases both Lage’s remarkable songcraft and adventurous sense of improvisation which takes flight in the company of his trusted trio with bassist Jorge Roeder and drummer Dave King (The Bad Plus).

A Few Stars Apart was recorded over 3 immersive weeks and the upshot is unmistakable: a sound that’s considered spacious, and beautifully lush. With Dave Cobb’s masterful production, every note is in service of the song. A testament to finding a human connection: between close family and friends as well as one’s own heart. These 11 songs reveal what it means to come home again, to be still, and to find community and yourself. [Available on limited edition colored vinyl].

Holy Sons – The Fact Facer LP reissue (Thrill Jockey)
Available on limited edition colored vinyl. Holy Sons is Emil Amos, a musician whose chameleonic tendencies and technical versatility has lead to him becoming an in demand multi-instrumentalist as a founding member of Grails and Lilacs & Champagne, as well as a member of Om and a hired gun for Jandek, to name a few.  The songs on The Fact Facer creep up on the listener, their fiercely addictive melodies unraveling slowly and purposefully. Jumping smoothly between many facets of Amos’ songwriting, the album does much to establish him as a talented multi-instrumentalist.  From the lysergic leads of Selfish Thoughts to the Danny Kirwan referencing solos of Transparent Powers and the skillful acoustic flourishes of The Fact Facer, Amos proves himself as adept and creative a guitarist as he is a drummer. It is telling that Amos has built up two Holy Sons bands simultaneously: one based in Portland and one based in New York.

AFI – Bodies CD (Rise)
California-based rock band AFI are back with their eleventh album, Bodies. The long-standing quartet – comprised of singer Davey Havok, guitarist- keyboardist Jade Puget, bassist Hunter Burgan and drummer Adam Carson – known for their unshakeable connection with their audience is a testament to the band’s knack for reinvention, renewal, and exploration, anchored by an unblemished authenticity. A place in rock ‘n’ roll history assured by magical musical androgyny, both post-modern and timeless, AFI remains guided by the flames of determination that defined their first ten albums and are sure to drive the next ten and beyond. [Vinyl edition due July 16.]

Pastor T.L. Barrett and The Youth For Christ Choir – Do Not Pass Me By Vol. 1 LP (Numero)
The final album in Pastor T.L. Barrett’s 1970s four-part suite of gospel funk LPs, Do Not Pass Me By finds the fiery preacher getting spaced out on God’s love. Accompanied by his Youth For Christ Choir, the eight-song record is buoyed by the seven-minute opus “Father Stretch My Hands”, later sampled by Kanye West on 2016’s The Life Of Pablo.

Rhiannon Giddens with Francesco Turrisi – They’re Calling Me Home LP (Nonesuch)
Now available on vinyl. Rhiannon Giddens (Carolina Chocolate Drops) and Italian multi-instrumentalist Francesco Turrisi, who both live in Ireland when they aren’t on tour, have been there since March 2020 due to the pandemic. The two expats found themselves drawn to the music of their native and adoptive countries of America, Italy, and Ireland during lockdown. Exploring the emotions brought up by the moment, Giddens and Turrisi decamped to Hellfire, a small studio on a working farm outside of Dublin, to record these songs over six days. The result is They’re Calling Me Home, a twelve-track album that speaks of the longing for the comfort of home as well as the metaphorical “call home” of death, which has been a tragic reality for so many during the COVID-19 crisis. The minstrel banjo, accordion and frame drums that have become characteristic of the pair’s sound are well represented on the album, but it’s the viola and cello banjo combination that captures unexpected emotion and intensity.

Of Montreal ‎– The Sunlandic Twins [Reissue/2005] 2xLP (Polyvinyl)
Red/orange swirl color vinyl pressing. Of Montreal’s seminal record, The Sunlandic Twins, arrived in April of 2005 as the follow-up to their breakthrough album, Satanic Panic In The Attic. To celebrate 15 years since its illustrious release, this brand-new edition features a redesigned gatefold jacket interior and five additional bonus tracks on side D to round out this superlative 23-song double-LP.

Oh Sees – The Chapel, SF 10.2.19 2xLP (Silver Current)
The Oh Sees at the peak of their prog obsession, super jammed out and totally dominating. The Chapel, SF 10.2.19 is a 53 minute, beautifully recorded, hi-fidelity live explosion of orc puke and kraut-gone-punk rock dominance by one of the rippingest bands of the 21st century. Two record set on limited edition cosmic black ice color vinyl with side D etching and faithfully (re)created TMOQ-style bootleg album art.

Marina – Ancient Dreams In A Modern Land CD (Atlantic)
On Marina’s new 10-track project, Ancient Dreams In A Modern Land, major themes range from the impending climate crisis doom, wealth disparity, gender and racial inequality to choosing yourself in a relationship. The new album is self-written and sees Marina (Welsh singer-songwriter Marina Lambrini Diamandis) co-producing six tracks for the first time alongside James Flannigan (Lana Del Rey, Dua Lipa) and Jenn Decilveo. The album was preceded by the release of three singles “Man’s World”, “Purge The Poison”, and the title track “Ancient Dreams In A Modern Land”. Vogue acclaimed “Since her idiosyncratic Family Jewels debuted in 2010, the singer-songwriter has attained one of pop’s most devoted followings…. ‘Man’s World’ advances her sound further, while retaining the ethereal hooks that have sustained Diamandis as one of the most consistently innovative acts in alt-pop.”
COMING NEXT WEEK!
JAMES – All The Colours of You CD/LP
KID CUDI – Man On The Moon III CD
SQUAREPUSHER – Feed Me Weird Things CD/LP
NICK CAVE / WARREN ELLIS – Carnage CD/LP
JASON COLLETT – Best Of LP
IGGY AND THE STOOGES – Jesus Love The Stooges LP
PHISH – LP on LP 01 LP
PHISH – LP on LP 02 LP
KING GIZZARD AND THE LIZARD WIZARD – Fishing For Fishies: Demos + Live LP
SELECTER – Too Much Pressure (40th Anniversary) LP
BURIAL – Chemz/Dolphinz 12″
LAMBCHOP – Showtunes LP