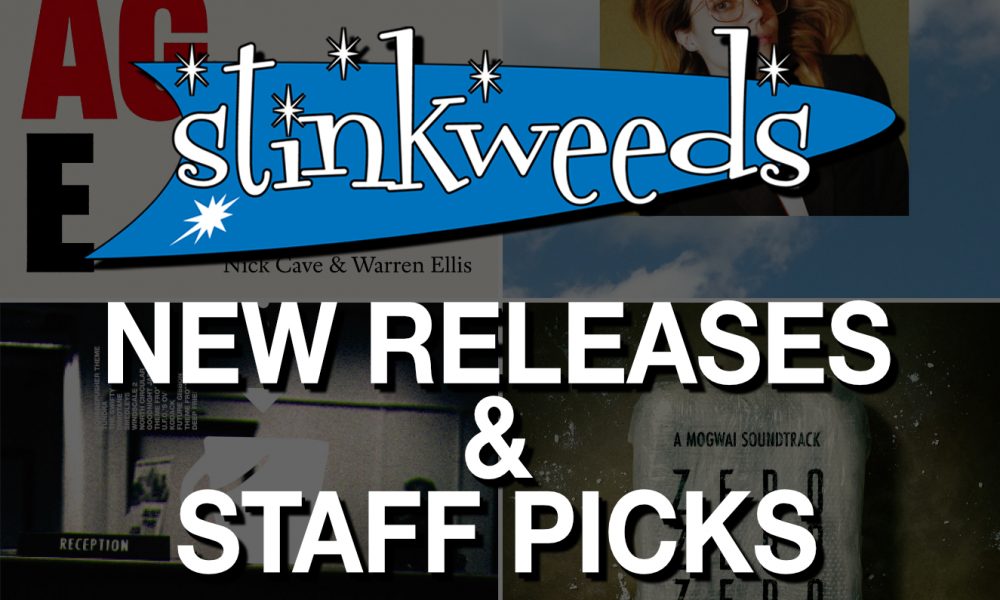 Nick Cave & Warren Ellis – Carnage (Goliath) CD/LP
Carnage is a new album by Nick Cave & Warren Ellis, recorded over a period of weeks during lockdown. Although the pair have composed and recorded many soundtracks together, and Warren is a long-term member of The Bad Seeds, this is the first time they have released an entire album of new songs as a duo. Cave describes the album as, “a brutal but very beautiful record nested in a communal catastrophe.” “Making Carnage was an accelerated process of intense creativity,” adds Ellis, “the eight songs were there in one form or another within the first two and a half days.”

Squarepusher ‎– Feed Me Weird Things [Reissue/1996] CD/2xLP+10” (Warp)
Squarepusher’s sonic masterpiece and debut mind-melter of an LP Feed Me Weird Things has been reissued on CD and vinyl and includes two extra tracks which were first released on the B-side of the Squarepusher Plays… EP and later featured on the original Japanese release of this album. [Available on black and limited-edition clear vinyl.]

Lambchop – Showtunes LP+MP3 (Merge)
In late 2019, Kurt Wagner was experimenting with something new, something that would eventually reveal itself as Lambchop’s Showtunes. By taking simple guitar tracks and converting them into MIDI piano tracks, “Suddenly I discovered I could ‘play’ the piano,” he says. “It was a revelation that from those conversions, I was able to manipulate each note and add, subtract, arrange the chords and melody into a form that didn’t have any of the limitations I had with my previous methods of writing with a guitar.” Removing these limitations led to a surprising new sound, something akin to show tunes but with edges sanded down and viewed through Kurt’s own specific lens.

Anna Fox Rochinski – Cherry LP (Don Giovanni) LP
Limited opaque red colored vinyl LP pressing. After spending nearly a decade recording and touring with the collaborative psych rock band Quilt, Anna Fox Rochinski has completed her first solo record, Cherry. Though this is her first solo outing, Quilt released three full length records on Mexican Summer between 2011-2016. Anna’s songs have been licensed and used for sync placement extensively, most recently in Netflix’s “You”, and Quilt signed a publishing deal with Third Side Music in 2016. Their music was featured in many press outlets including NPR and Pitchfork, and was performed live on KEXP, Late Night with Carson Daly, and NPR’s Tiny Desk.

Mogwai – ZeroZeroZero LP (Rock Action)
Available on indie exclusive white vinyl. To celebrate the acclaimed eight-part cocaine crime drama, ZeroZeroZero, and to meet the many requests received for it, Mogwai’s soundtrack to the series is available for the first time on double white vinyl and exclusively for Indie stores. Includes MP3 download. The soundtrack has only previously been available digitally. “…a masterful collection from a band who enter their second quarter century as essential as ever.” Clash Magazine UK 8/10

The Selecter – Too Much Pressure [Reissue/1980] 2xLP+7” (Chrysalis)
Vinyl reissue of the first album by the British ska band. Includes the bonus 7” single “On My Radio”.

Burial – Chemz/Dolphinz 12″ (Hyperdub)
Chemz is hooky, rushy and loved-up – both an unhinged premonition of unleashed post-pandemic joy, and a demonic flashback to past ecstasies in a hardcore style perfected in the UK. Chemz is a 12 minute rave monster that has ingested several tracks and incorporated them into its distended body. At the other end of the Burial bi-polar spectrum, Dolphinz is a desolate oceanic love letter to our underwater friends.

Iggy and the Stooges – Jesus Loves The Stooges LP (Cleopatra)

Limited colored vinyl LP pressing on black and gold vinyl. Collection featuring rare, raw and rockin’ studio recordings by the most important U.S. punk rock band – Iggy & The Stooges. Features the band’s unique twists on Dylan’s “The Ballad Of Hollis Brown,” Hendrix’s “Purple Haze” plus the Stooges classics “Jesus Loves The Stooges,” “I Wanna Be Your Dog,” “I’m So Glad” and more!

Kid Cudi – Man On The Moon III: The Chosen CD (Republic)
The seventh studio album by rapper Kid Cudi is the final installment of his Man On The Moon trilogy of albums (which includes 2009’s Man On The Moon: The End Of Day and 2010’s Man On The Moon II: The Legend Of Mr. Rager). The 18-track affair was produced mainly by Cudi himself and Dot da Genius, along with Plain Pat, Emile Haynie and Mike Dean, all of whom contributed to the previous two Man on the Moon albums. Guest vocalists include Phoebe Bridgers, Pop Smoke, Skepta and Trippie Redd.

King Gizzard and the Lizard Wizard – Fishing For Fishies: Live and Demos (Mad Dragon)
As a contribution to King Gizzard’s “Official Bootlegger” series, MAD Dragon is excited to announce Fishing For Fishies: Live and Demos. Featuring exciting live versions and never-before released demo tracks from King Gizzard’s audio archive. This exclusive release is limited to only 500 copies, on red vinyl. Once they’re sold, they’re gone! Following the environmental conservation message from the original ‘Fishing For Fishies,’ MAD Dragon has proudly partnered with Penn Environment. All proceeds form sales contribute to bring Pennsylvanians cleaner air, energy, and to protecting natural reserves across the state.
Islands – Islomania LP (Royal Mountain)
Limited green colored vinyl LP pressing. Over the course of ten groove-heavy songs, Islomania flits from the ridiculous to the sublime. Every song here begins bottled up, but there’s always a cathartic release by the end. There’s darkness and doubt in every crevice of this record, but there’s always a release,” Nick Thorburn says.