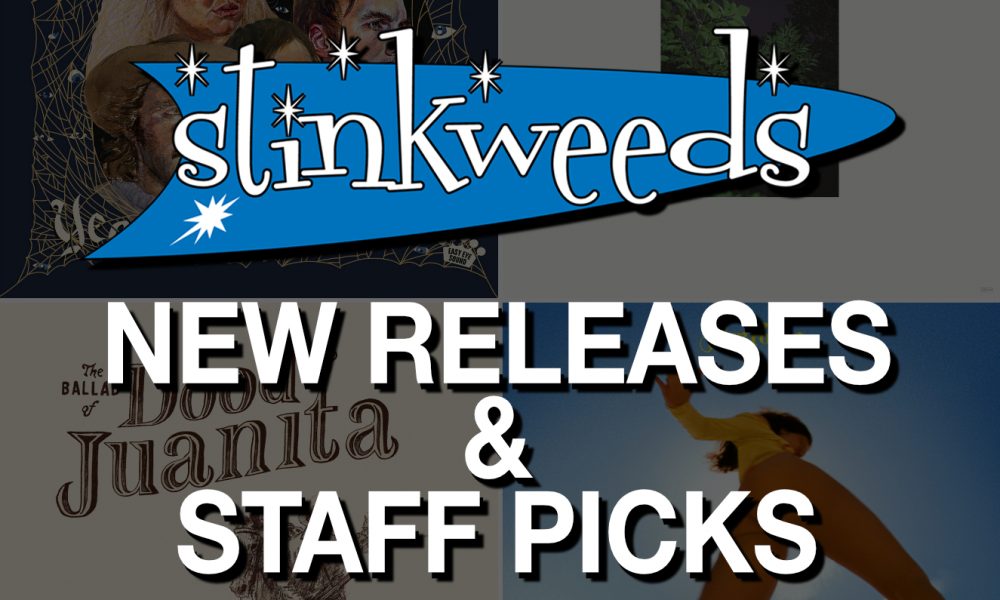 Shannon & The Clams – Year Of The Spider CD/LP/Cassette (Easy Eye Sound)
The widely anticipated and much ballyhooed garage rock idols, Shannon & The Clams’ new studio album, Year Of The Spider, is here! The band returned to Nashville to record with Dan Auerbach at his legendary Easy Eye Sound studio. Fresh off their standout album, Onion, and supporting tours with the likes of The Black Keys and Greta Van Fleet, they returned to the studio to craft their utterly unique vintage sound that incorporates wonderfully strange elements of doo-wop, classic R&B, garage psych and surf rock to produce this timeless gem from these perennial favorites. The band, fronted by Shannon Shaw and Cody Blanchard on lead vocals with Will Sprott on keyboards and Nate Mahan on drums, crafted an endlessly vivacious, ebullient and clever album from the kings and queen of the Bay Area garage punk scene.

Lorde – Solar Power LP (Republic)
Recently, in a surprise move, Grammy Award-winning, multiplatinum artist Lorde released her new song “Solar Power”. The track, which appropriately dropped timed to the only solar eclipse of the year, came alongside the announcement of her highly anticipated third studio album of the same name. Solar Power includes 12 tracks and is produced by Jack Antonoff, who she collaborated with on her chart-topping last album, Melodrama.

Sturgill Simpson – The Ballad Of Dood & Juanita CD (High Top Mountain)
CD now, vinyl in December. Inspired by such classic concept albums as Willie Nelson’s Red-Headed Stranger, Sturgill Simpson’s The Ballad of Dood & Juanita is the Grammy-winning singer/songwriter’s third album in twelve months, and his most ambitious project to date. Written and recorded in less than a week and featuring the same ace musicians who played on 2020’s Cuttin’ Grass albums, the record tells a classic American story of a Civil War-era couple torn apart by violence and reunited by love – what Sturgill calls “a simple tale of either redemption or revenge.” The Ballad Of Dood & Juanita is Simpson’s first album of all new original music since the release of 2019’s Grammy-nominated Sound & Fury. Special guest Willie Nelson is the featured lead guitarist on the track “Juanita.” [Vinyl edition due December 3.]

Villagers – Fever Dreams CD/LP+MP3 (Domino)
Villagers return with their fifth studio album, Fever Dreams. Written over the course of two years, the main bodies of the songs were recorded in a series of full-band studio sessions in late 2019 and early 2020. Over the course of the long, slow pandemic days, Connor O’Brien refined them in his tiny home studio in Dublin, and the album was then mixed by David Wrench (Frank Ocean, The xx, FKA Twigs). These are songs with the strange, melted shapes and the magical ambivalence of dreams. The intent of the songs is both mysterious and as clear as a bell. With Fever Dreams, there is a sense of a deepening mastery and an expanding reach by O’Brien. Inspiration for the album was found in many places and came in from all angles, from night swimming on a Dutch island to Flann O’Brien, Audre Lorde, David Lynch, L. S. Lowry via the library music of Piero Umiliani and Alessandro Alessandroni and jazz from Duke Ellington and Alice Coltrane. [An indie store limited-edition vinyl edition is available.]

Martha Wainwright – Love Will Be Reborn CD (Cooking Vinyl)
Love Will Be Reborn is songwriter Martha Wainwright’s first album since 2016’s Goodnight City, and the first since 2012’s acclaimed Come Home To Mama to feature so much original material. All eleven songs on the album were written by Martha. She wrote the title track a few years ago in what was a very dark time for her personally and it hints at the ache of recent years while capturing a sense of optimism for the future. She wraps her wondrous, trademark vocals around the heartbreak to dizzying effect. Recorded in Martha’s Montreal hometown, the album was made in the basement of café Ursa which also served as a studio and at PM Studios. Martha plays guitar and piano and enlisted the help of Toronto musicians Thom Gill (guitars, keys, back-ups), Phil Melanson (drums, percussion) and Josh Cole (bass). Pierre Marchand plays keyboards on “Love Will Be Reborn” plus two other tracks while Morgan Moore plays bass on several songs.

Devendra Banhart & Noah Georgeson – Refuge CD/LP (Dead Oceans)
Last spring, Devendra Banhart and Noah Georgeson started to make a record that was like nothing they had made before — an ambient album that would be both a haven from a suddenly terrified world and a heartfelt musical dialogue between two men who have been friends and collaborators for over two decades. Refuge is an album of profound meditative beauty which offers the listener a much-needed sense of peace and renewal. But while it was recorded in 2020 its roots go back much further — all the way to the start of their friendship and, beyond that, to the shared sounds and ethics of their childhoods.

Nathan Salsburg – Psalms CD/LP (No Quarter)
A collection of new arrangements of Biblical psalms composed and performed by acclaimed guitarist Nathan Salsburg. Following Third (2018) and Landwerk (2020), Psalms was born of a desire for some kind of rigorous and creative Jewish engagement. Though its origins were solitary, the album was recorded with many collaborators (James Elkington, Joan Shelley, Will Oldham, Spencer Tweedy) leading to a sweeping and lush conversation with the past.

Pile – Songs Known Together, Alone LP (Exploding In Sound)
Pile is currently known as a band but it started in 2007 as a solo project by Rick Maguire. Because of the circumstances of 2020, it temporarily returned to being a mostly solo operation and Rick recorded Songs Known Together, Alone, a reimagining of some of the band’s previously released material. Recorded live in a barn in upstate New York, Rick used the opportunity to explore new sounds and instrumentation, half of the songs were performed on guitar and a foot-pedal synthesizer and the other half performed on piano. The reimagined performances show Pile in a new light, and while the approach is unlike anything heard from the band before, the emotional charge is just as palpable.

Fink – IIUII CD/LP (R’coup’d)
IIUII is a retrospective, but it’s just as much about the here and now. To re-record those songs with the maturity that Fin and his band members have achieved is about viewing the past through the lessons it has taught, not just remastering and repeating it. This was a chance to listen back through all the records, appreciate them for what they are, separate from the usual demands of which songs work on stage – and then give each song the treatment it deserves. With a solid fan base worldwide, Fin and his band have played the venues and festivals they want, and if not plain sailing, then certainly they’ve been in a space where they can operate with confidence, soaring with shoegaze layers one minute, back to purist blues basics the next. Fin has also participated in a sideline in co-writes on records by the likes of John Legend, a few soundtracks and the occasional excursion into dub or techno to keep things interesting.

Emma Jean Thackray – Yellow CD/LP (Movementt)
The debut album by Emma-Jean Thackray feels exactly like the sort of thing we’ve been longing for over the last 12 months: a transcendent, human, shared experience. Across its 49 minutes, Yellow draws glowing lines between ‘70s jazz fusion and P-Funk, the cosmic invocations of Sun Ra and Alice Coltrane, and the gorgeous orchestration of the Beach Boys. “I wanted the whole thing to sound like a psychedelic trip,” explains Thackray. “You put on the first track, it takes you through this intense experience for almost an hour, and then you emerge on the other side transformed.” The result is an album that speaks the language of positivity, as rich lyrically as it is musically. You might best understand what Thackray does through reference to auteur figures like Brian Wilson or Madlib, who straddle instrumentation, arrangement and production in order to bring the sound in their head to fruition. As a composer, producer, singer, multi-instrumentalist and DJ, Emma is just as at home working with the London Symphony Orchestra as she is hosting her show on Worldwide FM. Production credits and collaborations include the likes of Squid, Makaya McCraven, BLU and Pinty.

James McMurtry – The Horses And The Hounds CD/2xLP (New West)
In James McMurtry’s new effort, The Horses And The Hounds, the acclaimed songwriter backs personal narratives with effortless elegance (“Canola Fields”) and endless energy (“If It Don’t Bleed”). This first collection in seven years spotlights a seasoned tunesmith in peak form as he turns toward reflection (“Vaquero”) and revelation (closer “Blackberry Winter”). Familiar foundations guide the journey. “There’s a definite Los Angeles vibe to this record,” McMurtry says. “The ghost of Warren Zevon seems to be stomping around among the guitar tracks. Don’t know how he got in there. He never signed on for work for hire.” [An indie store limited-edition vinyl edition is available.]

Deafheaven – Infinite Granite CD/2xLP+MP3 (Sargent House)
Over the course of their first ten years, Deafheaven’s music vacillated between tormented beauty and harmonic rage – a hybrid of black metal’s malice and shoegaze’s sublime wall-of-sound. On their fifth album, Infinite Granite, Deafheaven are no longer toying with the juxtaposition of pitting metallic abrasion against swirling grandeur. Quite the opposite: Infinite Granite is a bold and brave leap forward, a gorgeous and invigorating album brimming with style and splendor. In the context of their catalog, it takes on a whole other layer of defiant beauty.