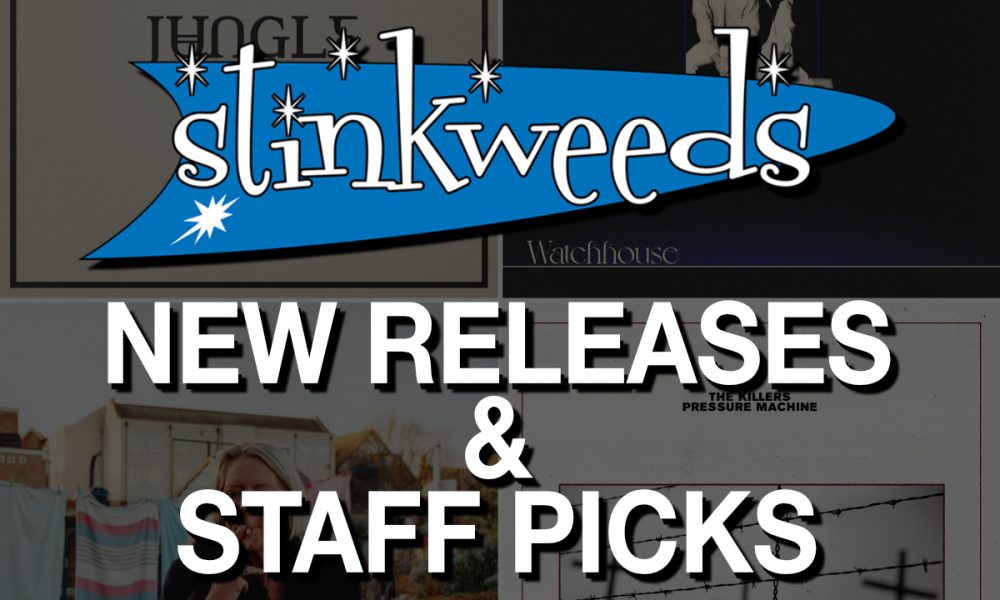 Jungle – Loving In Stereo CD/LP/Cassette (Caiola)
Jungle’s new album Loving In Stereo is the soundtrack for a summer quite unlike any other. The British producer duo has created a huge disco record for the post-social distancing age, with a life-affirming, dancefloor-igniting, sun-kissed celebration of all the things that make music irresistibly joyful. [A limited-edition indie store exclusive vinyl pressing, and value-added sticker sheet are available.]

Watchhouse – Watchhouse CD/LP (Tiptoe Tiger Music)
Andrew Marlin and Emily Frantz of Watchhouse – the critically acclaimed roots music duo who until recently were known as Mandolin Orange – deliver their new self-titled album. With the change of name comes an artistic rebirth: While still firmly rooted in poetic Appalachian folk, there’s a sonic adventurousness informed by American primitivism and ambient soundscapes that gives Marlin and Frantz’s songs a new, unknowable allure. Watchhouse is audacious, spectral music that wrestles with and finds magic in the relationships we build with our families, our society, our planet, and ourselves.

Snoh Aalegra – Temporary Highs In The Violent Skies CD (Roc Nation)
Snoh won Best New Artist at the 2020 Soul Train Awards and Best New R&B Artist at the iHeartRadio Music Awards. The artist is also a known commodity in the fashion space having worked with some of the biggest brands and designers in the world. [Vinyl edition due August 27.]

El Michels Affair Meets Liam Bailey – Ekundayo Inversions CD/LP (Big Crown)
There has always been a reggae influence in the music of El Michels Affair. From their cover of “Hung Up On My Baby” done in a reggae style, to the general sound and approach that permeates Leon’s production techniques. While recording Bailey’s 2020 Ekundayo album, they did some straightforward reggae tunes inspired by different eras alongside some modern R&B tracks that would fit more comfortably next to Frank Ocean than Jacob Miller. It is this same notion that old and new can live so comfortably together that birthed the idea of Ekundayo Inversions. [A limited-edition translucent red color vinyl pressing is available.]

The Killers – Pressure Machine CD/LP (Island)
The Killers’ seventh studio album, Pressure Machine, is about the small town of Nephi, Utah where frontman Brandon Flowers spent his youth. The songs are extremely personal and cover a spectrum of emotions in connection to growing up in a rural setting. The album was co-produced by the band, Shawn Everett, and Jonathan Rado (Foxygen), all of whom worked together on 2020’s Imploding The Mirage. When the Covid-19 pandemic shut down the promotional run and worldwide tour for Imploding The Mirage, “everything came to this grinding halt,” says Flowers. “And it was the first time in a long time for me that I was faced with silence. And out of that silence this record began to bloom, full of songs that would have otherwise been too quiet and drowned out by the noise of typical Killers records.”

Samia – Scout CDEP (Grand Jury)
Following the huge success of her The Baby and The Baby Reimagined albums, Samia’s brand new EP Scout showcases her diverse musical palate, traversing the plains of gloriously infectious pop and atmospheric indie before serving up a winsome ballad and a cover of When In Rome’s “The Promise” with Jelani Aryeh.

Scritti Politti ‎– Cupid & Psyche 85 [Reissue/1985] CD/LP (Rough Trade)
Scritti Politti ‎– Anomie & Bonhomie [Reissue/1999] CD/2xLP (Rough Trade)
Despite the series of radical shifts that underpinned its creation, Scritti Politti’s second album Cupid & Psyche 85 achieved the virtually impossible. While everything was scaled up – the ambition, the sound, the audience – the singular artistic vision that drove the group not only remained intact and undiluted in these bigger surroundings, but became more inventive, more adventurous and, ultimately, more beloved. The group erupted back into life with 1999s Anomie & Bonhomie. Recalibrated, re-evaluated, re-imagined and, eventually, rewarded. Anomie & Bonhomie is the heady results of this artistic rebirth. Illuminated by the band’s stylish pure pop spotlight, collaborations with Mos Def, Lee Majors and Wendy Melvoin give the record a neon-lit, nocturnal shimmer.

Sun Ra – Lanquidity 4xLP (Strut)
The definitive edition of Sun Ra’s classic Lanquidity album from 1978 with as a 4xLP box set editions. Recorded overnight at Bob Bank’s Blank Tapes on July 17, 1978 after the Arkestra had appeared on Saturday Night Live, the album is unique in the Ra catalogue. “Most critics felt that it was more of a fusion-inspired record,” explains Michael Ray. As the name suggests, the album is liquid and languid. Bob Blank continues, “Musically, it was very ad hoc and freeform. There were horn charts, but most tracks came out of improvised jams. Sun Ra just did his thing.”

Tori Amos ‎– Under The Pink [Reissue/1994] 2xLP (Atlantic)
Featuring the unforgettable “Cornflake Girl”, Under The Pink entered the UK charts at #1 upon its 1994 release, and “God” topped the US modern rock charts. This edition has been recut by producer Jon Astley and delivers the original track listing across two LPs.

Grateful Dead – Grateful Dead (Skulls & Roses): Remastered 2xLP (Grateful Dead)
For the Grateful Dead’s second live album, released in 1971 and two years after its predecessor Live/Dead, the band delivered an equally magnificent, but entirely different sound. Whereas Live/Dead was a perfect sonic encapsulation of the band at the peak of their primal Dead era, Skull & Roses captures the quintessential quintet, the original five piece band, playing some of their hardest hitting rock ‘n’ roll (“Johnny B. Goode”, “Not Fade Away”), showing off their authentic Bakersfield bona fides (“Me & My Uncle”, “Mama Tried”, “Me & Bobby McGee”), and some originals that would be important parts of the Dead’s live repertoire for the next 24 years (“Bertha”, “Playing In The Band”, “Wharf Rat”).

Pearl Jam – No Code [Reissue/1996] LP (Epic)
Vinyl reissue of Pearl Jam’s fourth album. No Code was more diverse than what the band had done on previous releases, incorporating elements of garage rock and worldbeat.

The Poets Of Rhythm – Discern/Define [Reissue/2001] 2xLP (Daptone)
As pioneers in the burgeoning modern funk scene of the ’90s The Poets of Rhythm created new standards, transcending the parameters lesser groups were defined by. With Discern / Define the Poets took their brand of classic funk to the next level by blending elements of rock, psychedelia, afro-beat, jazz and heavy, heavy drums to create a wholly original brand of transcendent, funky soul.

Joan Shelly – Ginko [Reissue/2012] LP (No Quarter)
Joan Shelly –Electric Ursa [Reissue/2014] LP (No Quarter)
Color vinyl pressings.  Originally released in 2012 and long elusive to fans, Ginko is the starting point for Shelley, now revered for her songwriting, “dazzling poetic imagery” (The Guardian) and “radiant sense of calm” (NPR Music). Electric Ursa was recorded out of the spotlight in Louisville, Kentucky. A quiet, 8-song record which brought her to the national stage, prompting Pitchfork to state that “while the album isn’t Shelley’s debut, it is her absolute arrival.”

Sasha – LUZoSCURA LP (Alkaane)
Sasha signals a new phase of his decade-spanning career with LUZoSCURA, an adventurous and essential compilation project that features newly-discovered emerging talent, as well as eminent artists and fresh material from Sasha himself.  Evolved from the eponymous playlist, LUZoSCURA began on Spotify as a stash of music sent to Sasha which didn’t meet the pace of his club sets, nor suit his venerated label LNOE. “The playlist thrived during lockdown,” highlights Sasha. “For the first time in over 20 years I had no reference point for banging club music, so I gravitated towards the LUZoSCURA playlist. I threw more energy into curating it because the sound felt right for that time, and I quickly realised I wanted to make some of my own music with this theme.”

Lucinda Chua – Antidotes LP (4AD)
Limited vinyl LP pressing. Lucinda is a multi-instrumentalist, producer, arranger and singer-songwriter based in South London with British, Malaysian and ancient Chinese heritage. She predominantly uses her voice, cello, effects and piano to write stunning pop ambient songs. Her debut EP Antidotes 1 was self-released in 2019, and was critically acclaimed by the likes of Pitchfork, Dazed and The Guardian. If Antidotes 1 was Lucinda building the landscape and scenery for her music, Antidotes 2 is her living within it. As the title suggests Antidotes is a safe haven; a place to heal and inclusive to all.