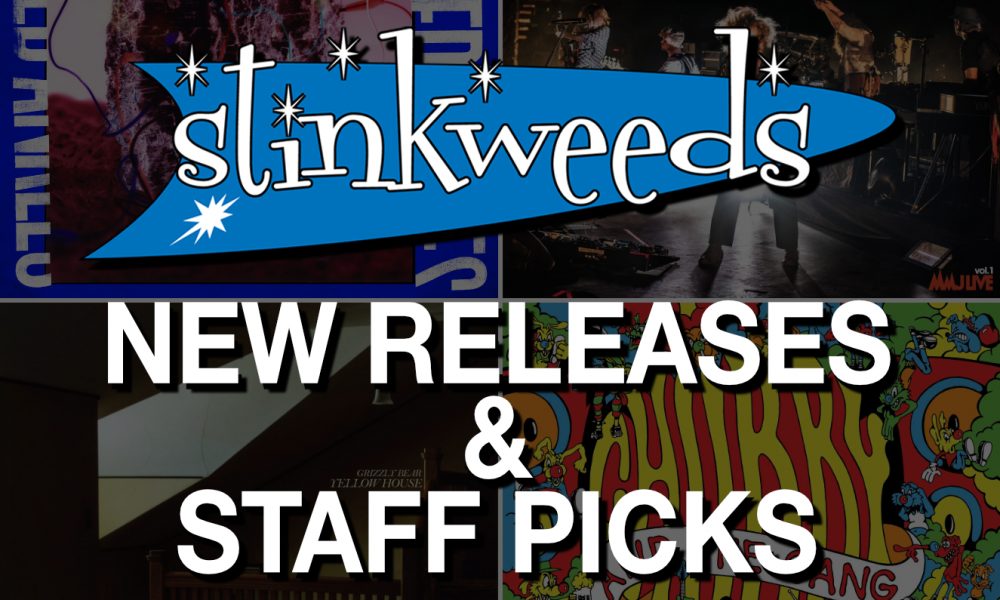 Chubby and The Gang – The Mutt’s Nuts CD (Partisan)
West London five-piece Chubby and The Gang are balanced by two energies – a casual “fuck it” on one side, an active “fuck off” on the other. For every moment of punk imperfection, there’s an intricate flurry of detail. For every enraged statement about modern life as war, there’s a lyric like “Hello heartbreak, my old friend” that catches you off guard. Made up of musicians from across the consistently thriving and criminally overlooked UK hardcore scene (ft. The Chisel, Big Cheese and more), Chubby and The Gang marinate its characteristic speed and sick-of-it-all energy in a mixture of ‘50s pop sounds. The result is a prickly take on the older, more melodic genres that punk derives from, chewing them up and spitting them out into something mangled but revitalized. [Vinyl edition due September 24.]

Liz Cooper – Hot Sass CD/2xLP (Sleepyhead)
Liz Cooper’s sophomore album Hot Sass marks multiple departures – from her 9-year home of Nashville, from her band addendum of The Stampede, and from the genre-based expectations she’s accumulated throughout her career. With these 12 new songs, Cooper comes into her own – both musically and as a person – embracing a newfound sense of independence, honesty, maturity and creativity. Hot Sass also features Cooper’s longtime bandmates and collaborators Joe Bisirri (bass), Ryan Usher (drums, percussion) and Michael Libramento (guitar, synthesizer). Cooper shares, “It’s me learning about what kind of woman I am and it’s not pretty all the time…I’m still processing these songs. Still reflecting. And I think that’s the thing – Hot Sass is just a stamp in time of what was happening in my life. I just want to continue making art that displays myself, the moments, and the people around me.” [A limited-edition grey color vinyl pressing is also available.]

Super Furry Animals – Rings Around the World: 20th Anniversary Edition CD/2xLP (BMG)
The fifth studio album from Welsh quintet Super Furry Animals is their most commercially successful to date. A musically eclectic record, incorporating pop, prog, punk, jungle, electronica, techno and death metal, Rings Around The World was shortlisted for the Mercury Music Prize in 2001 and named Mojo’s best album of the year.

Grizzly Bear – Yellow House (15th Anniversary Edition) 2xLP+MP3 (Warp)
Limited clear vinyl pressing. Grizzly Bear has come a long way. From its original incarnation as a one-man band of acoustic guitar, field tapes, and a drum machine to its current state as a full band complete with drums, multiple guitars, bass, woodwinds, effects pedals, all cradled by four-part harmonies, Grizzly Bear’s music has made the leap from charming lo-fi folk rock to breathtaking, experimental cinematic pop. Grizzly Bear is remarkable not just for its attention to detail but for the concern for how a song feels. Flush with heart and melancholy, the music is seductive and intimate, deep with hazy-eyed choruses, whistles, piano and banjo. The group’s 2006 Warp Records debut, Yellow House, melded the possibility of the digital age with the classic American songbook. “It’s one of those more timeless works, the ones that years down the line may linger and appear as if they could’ve come from any handful of eras at once.” – Stereogum

Karate – Karate [Reisssue/1996] LP (Numero)
Underground rock festered and splintered as it spread through the U.S. in the mid-’90s, the alternative boom giving rise to microcosmic regional scenes singularly focused on feral powerviolence or screamo songs about breakfast. Boston’s Karate emerged as a force that could grip a national youth movement whose disparate tastes still commingled in the inky pages of fanzines overflowing with florid prose and on concert calendars for volunteer-run DIY spaces, community centers, and bowling alleys. In this world, Karate’s music was an enigma, one equally inviting to sneering punks and highfalutin indie-rock aficionados. Their 1996 self-titled debut, issued on Southern Records, set the standard. Lasooing together white-knuckle posthardcore tension, sharply focused slowcore serenity, and resplendent jazz complexity, Karate eschewed settling in any one definiable style. But they certainly used the language of punk to get their point across; occasionally, guitarist Geoff Farina abandons his warm, hushed cadences for a hoarse shout that made him sound ragged, intensifying an aggression that burst out with every snaggletoothed guitar riff or drum snap that went off like canonfire.

My Morning Jacket – Live 2015 3xLP (ATO)
Limited color vinyl pressing. Widely considered one of the greatest live bands of their generation, My Morning Jacket has emerged as one of the most vital and reliably thrilling forces in American rock and roll. On Live 2015, their first live album in 15 years, MMJ showcase 16 hand-picked, explosive live performances recorded over the course of 2015’s The Waterfall Tour.

Snapped Ankles – Forest Of Your Problems CD/LP (Leaf)
“It’s hard to know where to start with Snapped Ankles. The London based four-piece is a group of forest folk descended from trees and hide their faces behind masks and ghillie suits. Forest Of Your Problems cover sports what I can only guess is a log cutting hooked up to alligator clips, seemingly a makeshift synth device. Aesthetics aside, Snapped Ankles still make music that’s accessible enough it’ll get stuck in your head whether you like it or not. Teeming with nature references, it’s obvious the group is talking about the environment on these songs, but what their exact message is can be hard to decipher.” – Post Trash

Directions – Echoes [Reissue/1997] 12”+MP3 (Temporary Residence)
In a musical history that spans nearly four decades, Ken Brown (aka Bundy K. Brown) was a member of noise-rock trio Bastro (along with David Grubbs and John McEntire) and a founding member of that group’s evolution into Gastr del Sol, before departing to form the iconic Chicago band, Tortoise. In 1995 Brown exited Tortoise to pursue several projects, including the group, Directions. After releasing one album on Thrill Jockey, the band went inactive, with Brown completing one final Directions release on his own before retiring the moniker. That record – a scarcely limited 12” called Echoes – would resonate with a diverse array of artists and producers, most notably Kieran Hebden (Four Tet).

Molly Lewis – The Forgotten Edge 12” (Jagjaguwar)
In the most literal sense, globally renowned whistler Molly Lewis makes her gorgeous and curious compositions out of thin air. New entrees into the exotica canon; sprawling, would-be Spaghetti Western scores; and a dash of Old Hollywood glamour – the whistle-led songs on her debut EP The Forgotten Edge are as complex, delicate and indelible as anything performed with viola or piano.

Nite Jewel – No Sun LP (Gloriette)
Born out of personal loss, the tradition of lament, and a Moog sequencer, Nite Jewel’s No Sun is a feat of unguarded electronic music. The album is grounded in Gonzalez’s electronic oeuvre and academic research but is also a sonic expulsion of pain.

Appleseed Cast – Low Level Owl Vol I-II 3LP (Burnt Toast)
Co-released by Burnt Toast Vinyl and Steadfast Records, deluxe 20th Anniversary Edition triple vinyl of The Appleseed Cast’s classic Low Level Owl album. Recorded and produced by Ed Rose in 2000 and released by Deep Elm Records in 2001 and 2002 as two volumes. Remastered for vinyl by Adam Boose at Cauliflower Audio and cut to lacquers by Bob Weston at Chicago Mastering. Pressed on high quality vinyl by Gotta Groove Records in Cleveland, OH. Featuring restored artwork, packaged in a matte finish, spot gloss triple gatefold jacket with full color printed inner sleeves, a full color 11×33 tri-fold insert. A limited one-time pressing for the 20th Anniversary of this album. Massive in approach and epic in scope, Low Level Owl is a vast soundscape that lives and breathes on its own. Nearly two hours in total length and previously released on two separate volumes, these twenty-six beautifully orchestrated songs of lush melody, expertly paced dynamics and blossoming atmospherics will leave you floored. The Appleseed Cast gives way to a more courageous exploration of sound and texture on Low Level Owl, experimenting with loops, echoes, instrumentation, inverting tape and changing speeds. They discover the sonic possibilities…the masterpiece in every measure. Each song nearly explodes at the seams, overflowing with symphonics, crescendos, swells of feedback and electronics.

The Bug – Fire CD/LP (Ninja Tune)
Legendary British producer Kevin Martin is back with his first new full-length album under The Bug moniker in seven years. “Fire”, the third album to his urban triptych (“London Zoo” & “Angels & Devils”) will be released on Ninja Tune in August 2021.

Amon Tobin – Out From Out Where LP [Reissue/2002] (Ninja Tune)
2021 Gold vinyl Reissue. Amon Tobin continues his adventures with the breakbeat on this, his fourth album. Darker, more complex, even more rhythmically driving and intense than ever before, this huge record will cement Tobin’s reputation as one of the most innovative and important names in dance music today.