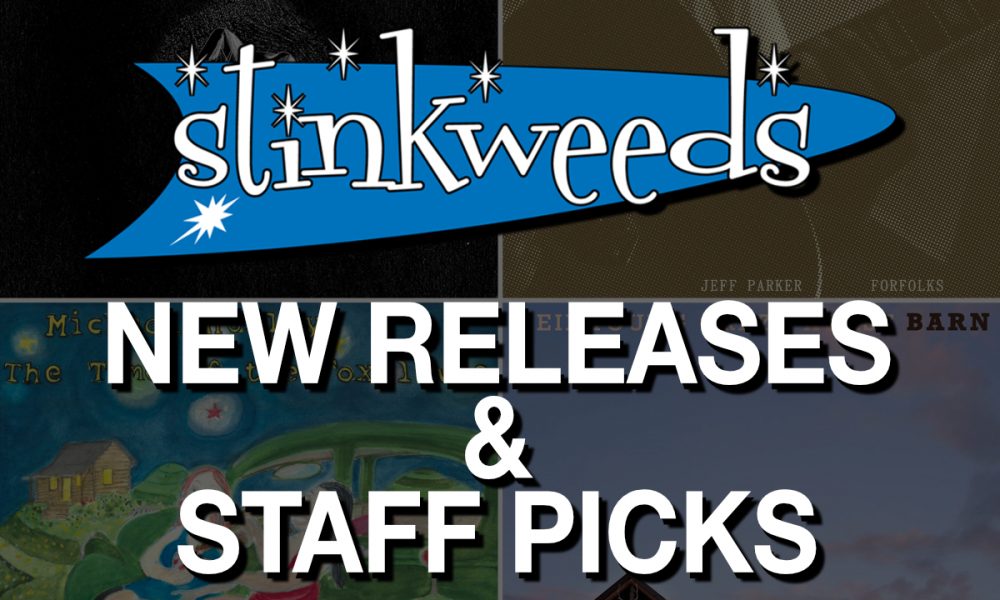 King Krule – You Heat Me Up, You Cool Me Down  2LP/CD (True Panther)
Mere weeks before the world went into lockdown, groundbreaking songwriter and vocalist King Krule performed a handful of concerts following the release of his critically acclaimed third album Man Alive!. Recorded during those final shows, the new live album, You Heat Me Up, You Cool Me Down offers fans a glimpse into a tour that never came to be and features a setlist of 17 songs that span the acclaimed artist’s entire discography including fan favorites “Easy, Easy”, “Baby Blue” and more.

Jeff Parker – Forfolks LP (Nonesuch)
Jeff Parker’s Forfolks – a new album of solo guitar works – features interpretations of Thelonious Monk’s “Ugly Beauty” and the standard “My Ideal”, plus six original compositions including “Four Folks” (a tune first written by Parker and recorded in 1995) and “La Jetée” (a tune he recorded with Isotope 217 in 1997 and with Tortoise in 1998). The four totally new original compositions are loop-driven, stratiform works that marry melodic improvisation with electronic textures. The album was recorded by Graeme Gibson at Sholo Studio in Altadena, California (aka Jeff’s house) over two days in June 2021. [An indie store exclusive limited-edition vinyl pressing is available. CD version due December 17.]

Art Blakey & The Jazz Messengers – First Flight to Tokyo: The Lost 1961 Recordings 2xCD/2xLP (Blue Note)
First Flight To Tokyo: The Lost 1961 Recordings is a thrilling previously unreleased live recording of Art Blakey & The Jazz Messengers captured at Hibiya Public Hall in Tokyo on January 14, 1961 during the band’s first-ever tour of Japan. The Jazz Messengers were among the first modern jazz groups to tour the country, and adoring Japanese audiences were enthralled by one of the band’s all-time great line-ups featuring the legendary drummer with Lee Morgan on trumpet, Wayne Shorter on tenor saxophone, Bobby Timmons on piano, and Jymie Merritt on bass. The concert features soaring performances of well-known jazz staples including Charlie Parker’s “Now’s The Time”, Thelonious Monk’s “‘Round About Midnight”, and Jazz Messenger hits including “Blues March”, “Dat Dere”, and “Moanin'”.

The New Pornographers – Mass Romantic [Reissue/2000] LP+7”+MP3 (Matador)
Red color vinyl reissue. Matador Records will celebrate the 21st anniversary of The New Pornographers’ debut record and breakout, Mass Romantic (2000), with a limited-edition red vinyl LP reissue out Dec 10th. The album – clocking three singers and 12 effervescent and undeniable power-pop gems – will return to us on red vinyl and will include a bonus 7”, Letter From An Occupant, which includes two rare B-sides, “The End of Medicine” and “When I Was a Baby.”

Michael Hurley – The Time Of The Foxgloves CD/LP (No Quarter)
Michael Hurley’s first new studio record in 12 years features eleven songs recorded in Astoria, Oregon during the brief time of year when the foxgloves bloom. Hurley had been workshopping the set at home for the past few years. Friends and collaborators came into town and contributed from afar. The songs are lifted by violin, organ, upright bass, banjo, percussion – but at the center, of course, is the enigmatic Snock, whose songs have grown only more unique and more 57 years after his debut album.

DMX – The Legacy 2xLP (Def Jam)
This collection was originally released as a Record Store Day exclusive in November of 2020. It is the definitive official Best Of DMX compilation.

Curtis Harding – If Word Were Flowers LP+MP3 (ANTI-)
Recently released on CD – an indie store exclusive red color vinyl pressing is now available. Simply calling Curtis Harding a soul man feels reductive. Harding’s voice conveys pain, pleasure, longing, tenderness, sadness and strength-a full gamut of emotions. Today his voice takes on an optimistic lilt with his new album, If Words Were Flowers. If Words Were Flowers is Harding’s first new music since 2018, a follow up to his critically acclaimed Face Your Fears. It features songs like “Hopeful”, where Harding croons with devotion over a classic soul groove, textured with infectious horn playing, background singers and modern psychedelic flourishes. Harding fuels his psychedelic sound with the essence of soul but isn’t bound by it. Instead, his songs convey an eclectic blend of genres leaping from the many musical lives he has lived from following his evangelical Gospel-singing mother on tour around the country as a child to rapping in Atlanta, forming a garage band with The Black Lips’ Cole Alexander to singing back-up for Cee Lo Green. Through these experiences he fully embraces life’s darkest intricacies and conjures dynamic, addictive melodies.

The Hold Steady – Open Door Policy LP (Positive Jams)
“The songs on Open Door Policy are about power, wealth, and mental health. They’re about technology, occupation, consumerism, freedom, fandom and escape. And although the album was written and recorded in 2019, the themes of this record seem to be underscored and highlighted by this year of virus and quarantine.” – Craig Finn [A limited-edition pink color vinyl pressing is also available.]

Jarv Is… – REMIX ED... 2xLP (Rough Trade)
From its earliest recordings beginning in an actual cave, via the enticing hypnotics behind the mantra-likes tracks “Sometimes I Am Pharaoh” and “Must I Evolve”, the exquisite yet candid storytelling of “Swanky Modes” and timeless anthem-turned-inadvertent lockdown soundtrack, “House Music All Night Long”, the debut album of the Jarvis Cocker-led band Jarv Is… proved a standout swirl of creativity, invention and vision on its release last summer. Yet Beyond The Pale has continued to inspire long after the sessions for the record stopped. Despite being divided by the pandemic, audiences came together around the album, Jarvis and Co. made a live film based on the album with pioneering directors Iain Forsyth and Jane Pollard entirely underground in a cavern, and intriguingly other musicians and producers have continued to be intrigued by the songs Cocker and his band created. The latter now has yielded an entirely new way of hearing Beyond The Pale, as for the first time in his career, Jarvis is releasing a remix album based on one of his records.

Lilys – Better Can’t Make Your Life Better [Reissue/1996] LP (Sundazed)
On the heels of our reissue of the Lilys 1999 cult classic The 3 Way, Sundazed is honored to bring you it’s predecessor of equal acclaim, 1996’s Better Can’t Make Your Life Better. Together they form what most would call the band’s pseudo–British Invasion period, and in our opinion, two of the greatest albums to come out of the ‘90s.

Makthaverskan ‎– För Allting LP (Run For Cover)
Limited transparent red color vinyl pressing. Gothenburg’s Makthaverskan has always seemed to escape traditional genre definition. As Pitchfork wrote of their 2017 LP Ill, they are a band that makes “music for the margins” – and such has been the case since these former schoolmates founded their band (the name of which roughly translates to “powerful woman”) over a decade ago. Their fourth full-length album För Allting (which translates to “For Everything”) follows a 2019 two song single “Demands/Onkel” as well as their aforementioned third LP and continues right where those songs left off at the intersection of blissful pop and angst-ridden post-punk.

Naughty By Nature – Naughty By Nature [Reissue/1991] 2xLP (Tommy Boy Music)
Double green and yellow color vinyl pressing. To qualify as a classic, a rap album must be solid from start to finish, containing no fillers, all thrillers. The musical production should match the lyrical skills of the MCs and the artist should possess his or her own style and flavor. Naughty By Nature’s self-titled debut can rightfully be called timeless.

Moses Sumney – Live From Blackalachia 2xLP (Tuntum)
Live from Blackalachia is a live album (and movie) composed of dynamic band arrangements from Moses Sumney’s first two albums. It was recorded in the Blue Ridge Mountains in the summer of 2020, on a stage built on a hill nestled within a 72-acre ranch.

Sunset Rubdown – Shup Up I Am Dreaming [Reissue/2006] LP (Pronounced Kroog)
Though met with praise by fans and critics alike, placing 15th on Pitchfork’s Top 50 Albums of 2006, Shut Up I Am Dreaming was never made available on vinyl. Originally released on Absolutely Kosher Records, the debut effort from Montreal’s Sunset Rubdown is a project previously reserved for the solo experiments of Wolf Parade’s Spencer Krug.

Walk The Moon – Heights LP (RCA)
Released last week on CD – now available on vinyl. Heights is the fifth studio album by pop rock band Walk The Moon. This is the band’s first album as a trio, without bassist Kevin Ray who parted ways with the band in December 2020.

The Muslims – Fuck These Fuckin Fascists LP (Epitaph)
The Muslims formed in 2017, brought together by the aftermath of the 2016 election. They have since released three albums The Muslims (2018), Mayo Supreme (2019), Gentrified Chicken (2020), and one EP Inshallah: Tomorrow We Inherit the Earth (2020). The all-queer, black & brown Muslim punk band unapologetically use music as a vessel to call out racism, the American political landscape, and white supremacy. The Muslims have a lot to say and they aren’t afraid of hurting any feelings in the process.
COMING NEXT WEEK!
BO BURNHAM – Inside CD/LP
ELBOW – Flying Dream 1 CD/LP
JEFF PARKER – Forfolks CD
NAS – Kings Disease II LP
KILLS BIRDS – Married LP
LOS RETROS – Looking Back LP
ROBERT POLLARD – From A Compound Eye LP
KID KUDI – Man On The Moon III LP