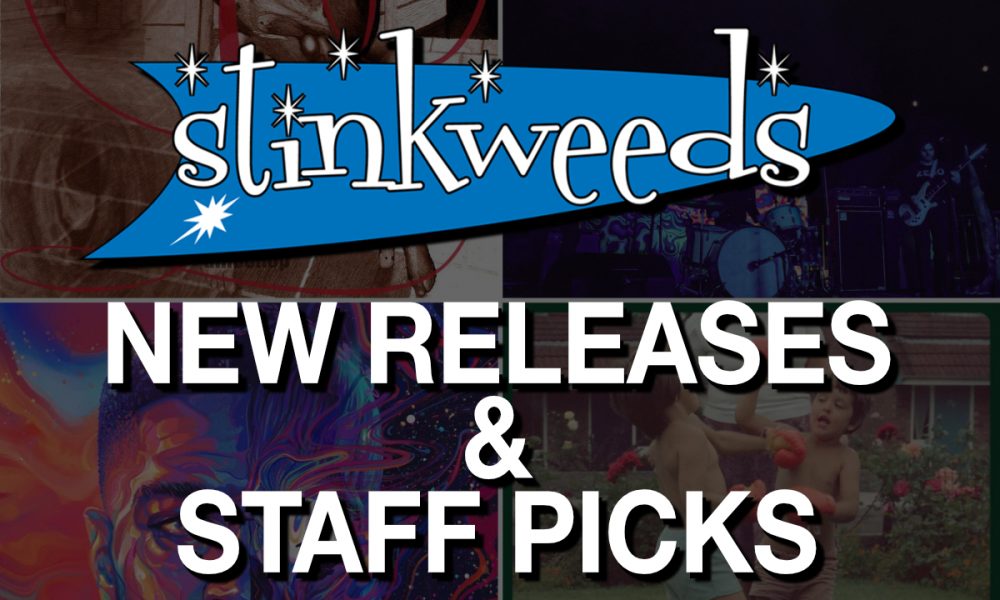 Our favorites of the year, as selected by the Stinkweeds Staff.

Lambchop – I Hope You’re Sitting Down /Jack’s Tulips LP (Merge)
Available on limited edition pink and red vinyl. Back in 1994, when Lambchop first lurched lackadaisically into public view, they seemed to many people freakish, outlandish, destined at best for the pages of photocopied fanzines and the graveyard hours of specialist radio stations. A sprawling collective of Nashville musicians-eleven were credited on the sleeve of I Hope You’re Sitting Down / Jack’s Tulips-they’d named themselves after a sock puppet, inexplicably given their album two titles, and stuck a painting on the cover of a small, barefooted child holding a dog whose cock and balls are on proud display. The album ended up in British music paper NME’s Top 50 Albums of the Year. France’s similarly influential Les Inrockuptibles placed it at number 25 on their own list. Not bad for a band who had gathered since the mid-1980s, once a week, purely for pleasure, in that smoky, dimly lit basement. Not bad, either, for a record whose sessions were initially only expected to produce enough material for a handful of 7-inch singles. Disheveled yet tender, anarchic yet intricate, I Hope You’re Sitting Down / Jack’s Tulips instead provided the springboard for a career still ongoing, despite repeated reinventions, and still compelled by stubbornly freakish, outlandish intentions-during which Lambchop’s ever-changing line-up has continued to confound expectations. Wagner, meanwhile, remains one of our most cryptic but crucial voices, an authentic poet of the magical banal. Sure, it was weird here, but it was wonderful, too. Over a quarter century later, it still is.

Frank Zappa – 200 Motels Soundtrack LP (Universal)
Frank Zappa’s 200 Motels turns 50! In celebration of FZ’s famous 1971 “Surrealistic Documentary,” Zappa Records, UMe and MGM are pleased to present the original soundtrack, a double-album set featuring all original packaging including the booklet & poster and a brand new remaster by legend Bernie Grundman at Bernie Grundman Mastering. Pressed on 180g black vinyl by Optimal Media in Germany.
Elbow – Flying Dream 1 CD/LP (Polydor)
Available on black and limited edition green vinyl.  Elbow’s 9th studio album, Flying Dream 1, is finally here. The band wrote the record remotely in their home studios before coming together at the empty Brighton Theatre Royal to perfect, perform, and record the songs. Features Craig Potter on production, Alex Reeves on drums, Sarah Fields on clarinet/saxophone, and London Contemporary Voices’ Wilson Atie, Adeleye Omotayo and Marit Røkeberg as backing vocalists, and long-time collaborator Jesca Hoop. Gatefold Jacket, 180-gram LP.
The World Is A Beautiful Place & I Am No Longer Afraid To Die – Illusory Walls LP (Epitaph)
Available on limited edition clear vinyl. Written and recorded remotely-a first for the band-Illusory Walls takes on the weight of human existence while it’s buckling under the pressure of today’s near-dystopian society. Personal anxieties and political struggles collide with a series of portentous, apocalyptic and dramatic tunes, resulting in some of the darkest music the band has made since forming in 2009.
Kid Cudi – Man On The Moon III: The Chosen LP (Republic)
After 10 years, one of the greatest trilogies in hip-hop gets its final chapter. Kid Cudi unveils his anxiously awaited 7th full-length studio album and the 3rd installment of his legendary Man On The Moon series, Man On The Moon III: The Chosen out on Republic Records. Cudi has returned with 18 new songs, such as “Show Out” feat. Pop Smoke and Skepta, “Lovin’ Me” feat. Phoebe Bridgers, and “Rockstar Knights” feat. Trippie Redd.
Sun Ra and His Arkestra – Omniverse LP (Modern Harmonic)
Available on colored vinyl. Omniverse, recorded in New York in 1979 and released that year on Sun Ra’s Saturn label, has been gathering dust for too long. It’s a fine, overlooked item in the vast Ra catalog. The tracks aren’t so much compositions as they are excursions, with only a few memorable themes or recurring motifs.
Fucked Up – David Comes To Life LP (Matador)
Fucked Up’s unrivaled masterpiece, David Comes To Life, is now reissued on limited edition lightbulb yellow vinyl in celebration of the rock opera’s 10th anniversary. Part of the 2021 installment of the ongoing Matador Revisionist History catalog series that includes The New Pornographers, Chavez, Bardo Pond, and Kurt Vile, the anniversary campaign will be accompanied by music from the era on streaming services for the first time. Fucked Up is confirmed to perform David Comes To Life in full on tour across North America, slated for early 2022.
Morphine – Cure For Pain LP reissue (Run Out Groove)
Remastered for vinyl from the original master source for the first time! Expanded to feature a bonus LP of previously unreleased tracks and B-Sides making their debut on vinyl. Pressed on 2-180g records and comes in a deluxe tip-on style jacket. Limited and numbered.
They Might Be Giants – The Escape Team LP (Idlewild)
The Escape Team is the 22nd album by They Might Be Giants, a concept album consisting of songs about a team of fictional characters invented by They Might Be Giants with artist and longtime visual collaborator David Cowles.
Eddie Vedder – Long Way 7″ (Republic)
Limited Edition 7-inch vinyl of Eddie Vedder’s new tracks “Long Way” and “The Haves.” Both tracks are off of his forthcoming solo album, Earthling, to be released in 2022
COMING NEXT WEEK!
Holiday Hours
Christmas Eve 10AM-4PM
Christmas Day – Closed
Dec 26th Regular Hours, 12-6