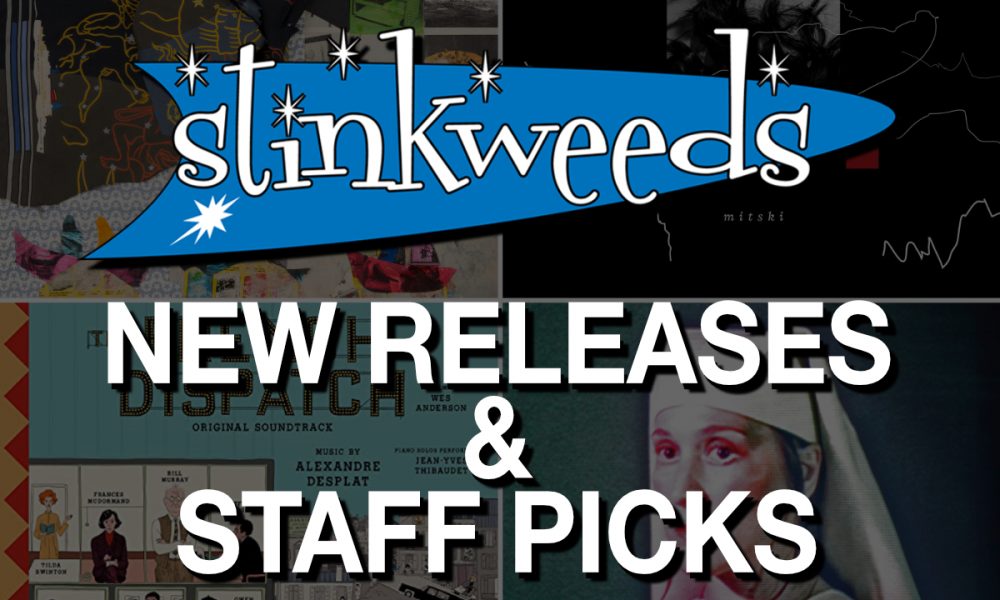 Animal Collective – Time Skiffs CD/2xLP+MP3 (Domino)
Time Skiffs‘ nine songs are love letters, distress signals, en plein air observations, and relaxation hymns, the collected transmissions of four people who have grown into relationships and parenthood and adult worry. But they are rendered with Animal Collective’s singular sense of exploratory wonder. Harmonies so rich you want to skydive through their shared air, textures so fascinating you want to decode their sorcery, rhythms so intricate you want to untangle their sources. Here is Animal Collective’s past two decades, still in search of what’s next. [An indie store exclusive color vinyl pressing is available.]

Black Country, New Road – Ants From Up There CD/2xCD/2xLP+MP3/4xLP+MP3 (Ninja Tune)
Black Country, New Road release their second album, Ants From Up There. Following on almost exactly a year to the day from the release of their acclaimed debut For The First Time, the band have harnessed the momentum from that record and run full pelt into their second, with Ants From Up There managing to strike a skillful balance between feeling like a bold stylistic overhaul of what came before, as well as a natural progression. – For The First Time melded klezmer, post-rock, indie and an often-intense spoken word delivery. On Ants From Up There they have expanded on this unique concoction to create a singular sonic middle ground that traverses classical minimalism, indie-folk, pop, alt rock and a distinct tone that is already unique to the band. [An indie store exclusive autographed blue marbled color double-LP edition including a book is available. The deluxe double-CD and four-LP editions include bonus live material, a booklet and a sticker.]

Mitski – Laurel Hell CD/LP+MP3 (Dead Oceans)
With Laurel Hell, Mitski cements her reputation as an artist in possession of such power – capable of using her talent to perform the alchemy that turns our most savage and alienated experiences into the very elixir that cures them. [A limited-edition opaque red color vinyl pressing is available.]

Hippo Campus – LP3 CD/LP (Grand Jury)
In the years between 2018’s Bambi and LP3, Hippo Campus has grown up and into itself. Although the five-piece has been friends since middle school and put out several studio releases since its inception, it’s the new record, LP3, that’s the most honest portrait of who Hippo Campus is. It’s also a study in the nuances of growing up – coming to terms with mortality, the confusing journey of sexuality, bottoming out, seeing decisions from the night before in the harsh morning light; finding your identity as a person and as an artist — how that can be a collision of elation and shame, painful and joyful all at once. LP3 marks a sort of ego death – and ultimately feeling okay with that. [An indie store exclusive translucent purple color vinyl pressing is available.]

Erin Rae – Lighten Up CD/LP (Good Memory)
Produced by Jonathan Wilson (Dawes, Father John Misty, Conor Oberst), Erin Rae’s highly anticipated album Lighten Up is a timeless amalgam of classic pop, cosmic country and indie rock, recorded in 2021 in California’s Topanga Canyon. Three years have passed since the release of her critically acclaimed debut Putting On Airs, which drew high praise from publications from Rolling Stone to NPR Music. She mostly spent her time on the road, performing at Newport Folk and Red Rocks, sharing stages with Iron & Wine, Jason Isbell, Jenny Lewis, Hiss Golden Messenger and Father John Misty, before her touring came to a sharp halt at the start of the pandemic. The solitude of the road and then the pandemic created space for Rae to undergo a sonic and philosophical shift where she found personal catharsis in creating an album that reflected on her newfound lessons of self-acceptance, alongside finding the confidence to offer social commentary on the environment, gender identity and equality.

Bastille – Give Me The Future CD/LP/Cassette (Republic)
Give Me The Future, Bastille’s wildly-ambitious new album, is a tribute to tech times and a glimpse of what could be to come. Exploring both the opportunities of new technology and the dark side of lives lived online, it’s as playful as it is thought-provoking, as dystopian as it is dancefloor-friendly and as electronic as Bastille have ever been. [An indie store exclusive translucent yellow color vinyl pressing is available.]

Mason Jennings – Real Heart CD (Loosegroove Inc.)
New release produced by Stone Gossard of Pearl Jam. “I’m very excited to be working with Loosegroove Records and to have had Regan Hagar and Stone Gossard produce this album. We made the unabashed folk record that I have been wanting to make for years. Kind of a love letter to the acoustic guitar and to musical intimacy. It was recorded in Minnesota and Seattle and features some rich and wonderful instrumentation including horns and strings. The cover art is a woven wall hanging that my wife Josie made that is hanging on our lake house wall. That sets the tone: warmth, home, and intimacy. Hope you enjoy!” – Mason Jennings [Vinyl edition due June 3.]

Christie Front Drive – Self-Titled LP reissue (Dark Operative)
Self-titled (aka Stereo) is the final album from Denver, Colorado’s Christie Front Drive. Originally released posthumously in 1996, the album was remastered in 2010. Christie Front Drive is regarded as one of the progenitors of the original midwestern style of American emo and routinely recognized in editorial lists citing the most important and greatest punk and emo bands of all time. Their approach was wholly unique, which in turn keeps the band and their discography relevant almost three decades later.

Ryan Adams – Big Colors LP+7” (Pax Americana)
Released last summer on CD – a limited-edition 180gm red color vinyl pressing + bonus 7″ single is now available. Big Colors is the soundtrack to a movie from 1984 that exists only in my soul. It’s a cliché inside a watercolor painting of neon blue smoke rising off summer streets in the night. It’s the most New York California album I could cut loose from my musical soul, and for me as both a guitar player and songwriter, this is the zenith point dream time. While I won’t be able to match this album for its depth and broad color forms in the future, this is the sound of my soul and a door to a place I’ll be returning to again. The treasures in our past are the shamanic visions of the future when the destination is dream zone 3000. This is that. I’m only dreaming in Big Colors now.” – Ryan Adams

Poppy – Flux LP (Sumerian)
Release last September on CD – two color vinyl editions are available: black & aqua blue galaxy and indie store exclusive clear w/ blue & black. Flux marks yet another artistic leap for the ever-evolving musician, featuring a stream-lined songwriting approach that puts her indelible earworm melodies at the foreground of a kaleidoscopic mosaic of overdriven guitars. Flux was produced by Justin Meldal-Johnsen (M83, Air, St. Vincent), who had Poppy and her band record live to tape, resulting in an organic feel that lends a decidedly personal touch to the new set of material.

The Reds, Pinks & Purples – You Might Be Happy Someday LP (Tough Love)
Limited blue color vinyl pressing. Deep amidst San Francisco’s Richmond neighborhood misty air and washed-out pastel blocks, Glenn Donaldson has been diligently creating minor masterpieces with rudimentary home technology for some time now. With The Reds, Pinks & Purples, Donaldson has finally created a vivid reflection of this dreary scene. You Might Be Happy Someday is an oblique strand of SF outer-avenue cloud cover that stretches across the Atlantic to the grey docks of Bristol as captured in Sarah Records’ fetishized insert photos.

Fionn Regan – 100 Acres From Sycamore [Reissue/2011] LP (Heavenly)
Originally released in August of 2011, 100 Acres Of Sycamore is the third studio album by Irish singer-songwriter Fionn Regan. Unlike his 2010 sophomore album, The Shadow Of An Empire, which featured mostly rock songs, 100 Acres Of Sycamore features a string section and has an acoustic aesthetic that more closely resembles his 2006 debut, The End Of History.