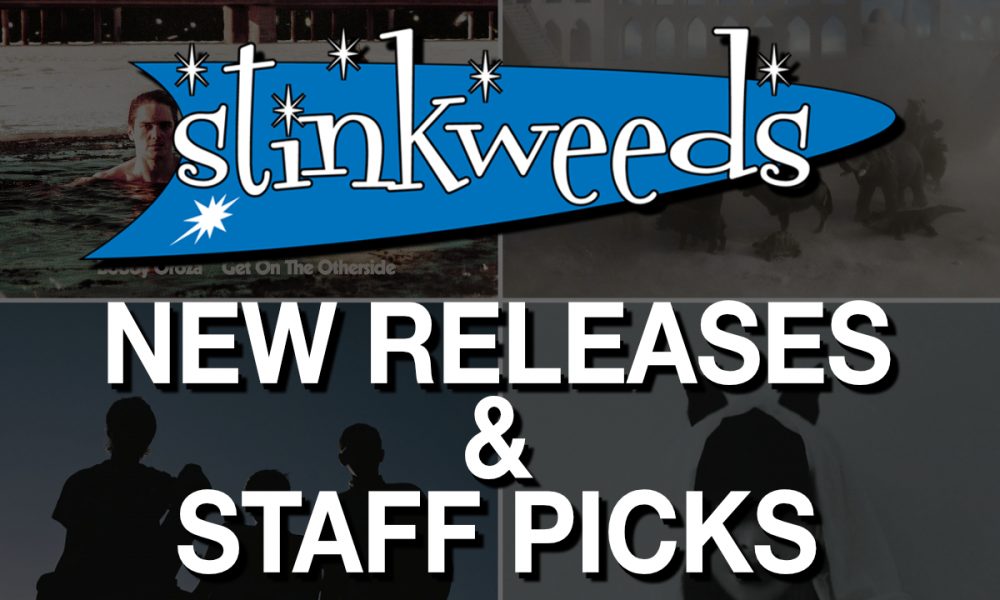 Bobby Oroza – Get On The Otherside CD/LP (Big Crown)
Bobby Oroza puts his desire for the profound on wax with his sophomore album Get On The Otherside. Musically, he has updated the formula we were introduced to on the first record. But lyrically, songs are bravely rooted in the more complicated, ubiquitous inner tangles of life like self-examination and coming to terms with the vastness of the human experience. The result is a record with Bobby’s newfound humility on full display and a message of encouragement to anyone who is struggling and can’t see a way out.  It still may be hard to nail down and define Bobby and his sound. He’s no one thing more than the other. But what he’s showing us now, on Get On The Otherside, is that we can also label him a soulful, philosophical optimist. [An indie store exclusive neon orange vinyl pressing is available.]

Shearwater – The Great Awakening CD (Polyborus)
CD out now, LP out on July 15. Shearwater’s seventh studio album, produced by the band and Dan Duszynski (Loma), shows us where its wandering frontman has been. The Great Awakening is a soulful and immersive travelogue of grand atmospheres and intimate landscapes, decorated with field recordings from Meiburg’s journey while writing his critically acclaimed debut book, A Most Remarkable Creature: The Hidden Life and Epic Journey of the World’s Smartest Birds of Prey. The resultant 11-track album anchored by Meiburg’s closely-recorded voice, more otherworldly and urgent than ever is one that Shearwater’s been striving toward for years: a journey into the unknown, embracing sorrow and joy, beauty and terror.

Blanck Mass – Ted K Original Score CD/LP (Sacred Bones)
In 2021 the story of the infamous Unabomber Ted Kaczynski received its theatrical debut in a new Tony Stone directed film, Ted K. Kaczynski is notorious for both tragically murdering three people (and wounding an additional 23) via bombs sent in the mail and for his numerous writings on the evils of technology he composed during his primitive residency in the woods of Montana. Stone’s choice to have the renowned electronic artist Blanck Mass score the film is somewhat ironic and creates an obvious tension perfect for the controversial and complex subject matter.

Laura Jane Grace – At War With The Silverfish 10” (Polyvinyl)
Half recorded at Grace’s TinyQuietStudio in Chicago and half recorded at Electric Eel in St. Louis, and mixed by her Devouring Mothers bandmate Marc Hudson, At War With The Silverfish finds Grace in a range of stripped-back, poignant modes that amount to an honest and holistic account of our shared humanity. Unafraid to spotlight open wounds and tangled feelings, Grace conveys the distinctive pluck that has defined her work with Against Me! and The Devouring Mothers, but with the intimate energy of home recording with an acoustic guitar. The album is not a clarion call, but a tender invitation. It is a necessary capsule of a woman’s artistic pulse; love, longing and loneliness told in affecting turns of phrase.

Kelly Lee Owens – LP.8 CD/LP (Smalltown Supersound)
After releasing her sophomore album Inner Song in the midst of the pandemic, Kelly Lee Owens was faced with the sudden realization that her world tour could no longer go ahead. Keen to make use of this untapped creative energy, she made the spontaneous decision to go to Oslo instead. There was no overarching plan, it was simply a change of scenery and a chance for some undisturbed studio time. It just so happened that her flight from London was the last before borders were closed once again. The blank page project was underway. Arriving to snow globe conditions and sub-zero temperatures, she began spending time in the studio with Lasse Marhaug. An esteemed avant-noise artist, Marhaug envisioned making music that would fall loosely in line with Throbbing Gristle. Kelly, on the other hand, had planned to create something inspired by Enya, an artist who has had an enduring impact on her creative being. They met each other halfway, pairing tough, industrial sounds with ethereal celtic mysticism, and creating music that ebbs and flows between tension and release. One month later, Kelly called her label to tell them she had created something of an outlier, her ‘eighth album’.

American Football – Rare Symmetry / Fade Into You 10” (Polyvinyl)
On the Rare Symmetry / Fade Into You 10″ single, American Football (Mike Kinsella, Nate Kinsella, Steve Holmes) expand on the dense beauty of LP3 with “Rare Symmetry”, incorporating chiming vibraphones, intricate picking patterns, and devastating lyrics. For the B-side, the band offers up a dazzling cover of Mazzy Star’s 1994 hit single, “Fade Into You,” with Miya Folick contributing vocals. Both tracks feature the iconic, jazz-infused drumming of former founding member Steve Lamos, who played on these songs before announcing his departure earlier this year. “This modern iteration of American Football has one foot in Midwestern emo and another in lush dream pop.” -Rolling Stone “Time has always seemed to work in American Football’s favor.” -NPR (Best Rock Albums of 2019) “Incorporating fuzzy shoegaze and metronomic post-rock, expanding the palette with rich and vibrant colors, it sounds fabulous; languid and deliberate but bursting with ideas.”

Deserta – Every Moment, Everything You Need CD/LP (Felte)
For Matthew Doty, Deserta has always been about exploring a sonic universe that allows him to express a kaleidoscope of emotions, without having to say much at all. Through a patchwork of reverb-tinged textures – drone guitars, lingering synths and driving percussion – the Los Angeles-based singer/ songwriter and multi-instrumentalist weaves together stories of care, frustration and catharsis that ultimately stretch to a gentle resolve. On new album Every Moment, Everything You Need, Doty chronicles the kind of year we all fear, full of uncertainty, tension and sustained pressure, and transforms it into a celebration of perseverance. It’s an essential reminder that we have the power to shape the stories we tell. [Available on indie store exclusive cloudy blue vinyl.]

Crows – Beware Believers LP  (Bad Vibrations)
Conjuring a dark and visceral post-punk that’s been hardened by years of notoriously rowdy live shows, London four-piece Crows have amassed a legion of die-hard fans since they formed back in 2015 and cultivated a singular, much-adored presence in the British alternative music scene. Equal parts ferocious and hedonistic, the incoming Beware Believers LP arrives off the back of their critically acclaimed 2019 debut Silver Tongues, international touring and festival appearances, and shared stages with the likes of IDLES, Wolf Alice, Girl Band, Metz, Slaves and Protomartyr.

Patty Griffin – Tape CD (PGM)
The 2x Grammy-winner releases a collection of rare demos and lo-fi home recordings. “Only an artist as strong as Patty Griffin would overlook these ten great performances in search of ‘better’ material. Hindsight often has its advantages and time between can bring a new perspective as did here.  Yet Griffin is unlike many other artists. She doesn’t offer up explanations for the inspiration for her songs. She rarely talks about themes or threads that run through her work. Yet, like many artists, she put the pandemic time off to good use, researching older material and in the process, making some new discoveries. Some of the songs she found were initially recorded alone in her home, singing into a recorder in the wee hours of the morning. A few were from an in-studio demo session in Nashville, including a duet with Robert Plant around the time they first met. She is all about the performances.” – Glide Magazine

Rufus Wainwright – Rufus Does Judy At Capitol Studios CD (BMG)
Rufus Does Judy At Capitol Studios finds Grammy Award-nominated singer/songwriter Rufus Wainwright performing his groundbreaking 2007 tribute to Judy Garland, Rufus Does Judy At Carnegie Hall, in its entirety, live from Los Angeles’ famed Capitol Studios. “The American Songbook and Judy Garland’s famed 1961 Carnegie Hall concert gave me a lot of hope after 9/11 and lead to the idea for my first song by song recreation of that show at the same venue,” says Wainwright. “It felt fitting to do the entire set again as the dazzling finale of my Rufus-Retro-Wainwright-Spective and hopefully the beginning of the finale of this global pandemic. Once again, these songs revealed their healing power. To be able to sing them in front of Renée, to sing with Kristin Chenoweth and still have my sister Martha be part of these shows was particularly meaningful although to sing them into the very microphone that Judy used for her recordings at Capitol Studios was the most mind-blowing.” [Vinyl edition due September 2.]

Yann Tiersen – 11 5 18 2 5 18 CD (Mute)
Reprogrammed, resampled, and reimagined, 11 5 18 2 5 18 is a collection of nine tracks that serve as a translation of Tiersen’s live show, taking songs from his 2021 release Kerber plus additional tracks from his catalog, completely restructured to present a new album. With a mesmerizing mix of piano patterns, swirling electronics and dancefloor-ready grooves, these songs continue an exciting new chapter in his career

Emma Ruth Rundle – EG2: Dowsing Voice LP+MP3 (Sargent House)
Emma Ruth Rundle’s second installment in her Electric Guitar series, EG2: Dowsing Voice, is almost like the soundtrack to a film that hasn’t been made. The mostly instrumental record follows her on a trip to the Welsh coast and down a magical well into the waters of nature, myth, and the Old Gods – by way of her improvised music. The 40+ minute album was sewn together from recordings channeled during her month-long solo journey in the early days of 2020 and completed before 2021’s critically lauded album Engine Of Hell was written. Unlike Electric Guitar One, EG2: Dowsing Voice features vocal improvisation, unconventional singing and extended vocal techniques free from lyrics. [A limited-edition translucent red color vinyl pressing is available.]

Go Sailor – Go Sailor [Reissue/2011] LP+MP3 (Slumberland)
Limited blue color vinyl pressing. Go Sailor was a great, short-lived band from the mid- ‘90s who represent a key link in the US indie music chain. Featuring Rose Melberg (Tiger Trap, The Softies, Gaze, Brave Irene, Knife Pleats), Linton (Henry’s Dress, The Aislers Set) and Paul Curran (Take A Day fanzine, Crimpshrine, Monsula), they released three great singles and a few compilation tracks, and then went their separate ways. Basic and lovely in their songwriting, they’ve perfected snapshots of where indie-pop was during that last burst of pre-internet indie activity. This album compiles all three of their 7” singles for Slumberland, Yoyo and Lookout!, and compilation tracks, and was first released on vinyl in 2011.

David Sylvian – Sleepwalkers LP (Groenland)
In the 00s, David Sylvian produced two of his strongest and most solitary statements, Blemish and Manafon. But those records don’t tell the whole story. During that the same period, Sylvian created an alternate body of work: a series of collaborations and side projects with leading talents of pop and improv, electronic and contemporary classical music. The best of these recordings are gathered here on Sleepwalkers, meticulously sequenced and remixed: the fruits of one-off meetings and lifelong partnerships, they jump from bliss to intrigue, romance to sensuality, as arch experiments lead into the lushest pop.