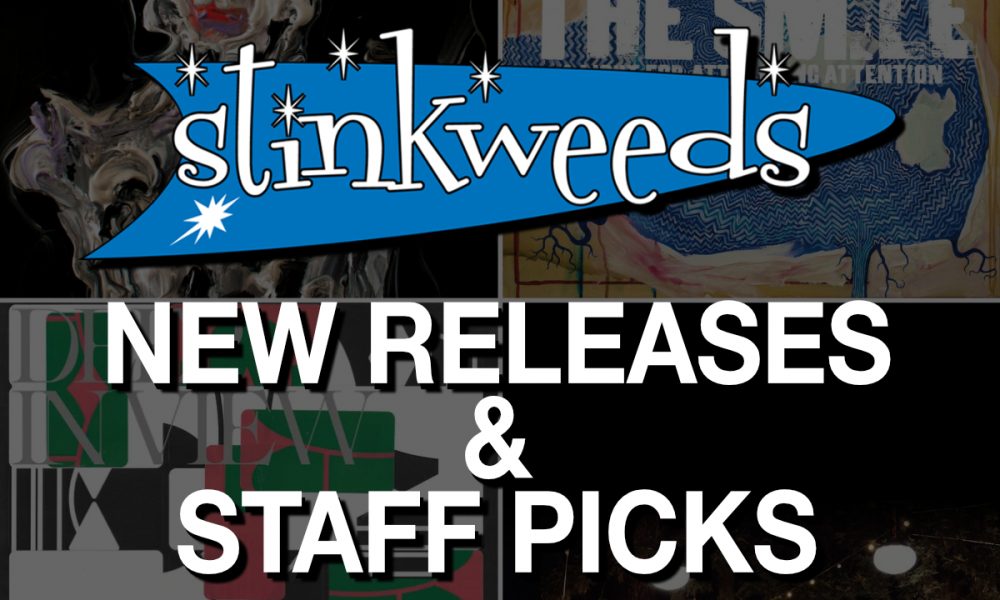 Perfume Genius – Ugly Season LP (Matador)
Double vinyl LP pressing. The music of Ugly Season was written for Perfume Genius and choreographer Kate Wallich’s immersive dance piece, The Sun Still Burns Here. The work was commissioned by the Seattle Theatre Group and Mass MoCA and was performed via residencies in Seattle, Minneapolis, New York City and Boston throughout 2019. During this time, Perfume Genius shared two of the dance project’s compositions – ‘Pop Song’ and ‘Eye in the Wall’. “It’s the sound of dancefloor euphoria,” said Pitchfork. “The color of lights flashing as you move through a crowd, the touch of skin damp and warm against everyone else’s.” Now the entirety of the project’s original music can be heard in Ugly Season. The album was produced by Perfume Genius and GRAMMY-winning producer and long-time collaborator Blake Mills and was created in collaboration with Hadreas’ long-time partner Alan Wyffels.
The Smile – A Light For Attracting Attention CD/LP (XL)
Available on indie exclusive yellow vinyl. The Smile is the new project from Thom Yorke, Jonny Greenwood (Radiohead), and Tom Skinner (Sons of Kemet). The 13- track album was produced and mixed by Nigel Godrich and mastered by Bob Ludwig. Tracks feature strings by the London Contemporary Orchestra and a full brass section of contempoarary UK jazz players including Byron Wallen, Theon and Nathaniel Cross, Chelsea Carmichael, Robert Stillman and Jason Yarde.
Slang – Cockroach in a Ghost Town CD/LP (Kill Rock Stars)
Slang’s debut Cockroach In A Ghost Town is a force of nature that came, seemingly, out of nowhere Lyricist/singer/guitarist Drew Grow and drummer/singer Janet Weiss started the band over a decade ago in Portland, OR – both having spent more than half their lives dedicated to making and performing music. Through the years, Weiss has played with everyone from her bands Quasi, Wild Flag, and Sleater-Kinney, to collaborators like Elliott Smith, Stephen Malkmus, and others. ; Grow has fronted his own groups Modern Kin and the Pastors’ Wives, producing other bands along the way. Starting as a moonlighting collaboration, the meeting of this particular group was kismet if not totally cosmic. In their first iteration as a duo, Slang hammered the Everly Brothers inside-out; they put a keen new light on songs by the Traveling Wilburys and Jackson C. Frank – setting out to harmonize together and just play.
Cola – Deep in View CD/LP (Fire Talk)
Deep in View is the debut album from former Ought members Tim Darcy (vocals, guitar) and Ben Stidworthy (bass) alongside Evan Cartwright (drums). Titled after philosopher Alan Watts’ anthology of the same name, the record is built on a foundation of elegant guitar grooves and knotty rhythms, offering commentary on modern life and technology through curious lyrical vignettes, where quotidian objects and scenes are never just as they seem. Deep In View is equally a product of introspective songwriting as it is a consideration of the abstract landmarks of an increasingly media-mediated society. It also presents the most concise and melodic songs Darcy and Stidworthy have written to date.. The album sounds streamlined and intentional, as the rhythms of the punchy and exuberant guitar parts, urgent basslines, and unexpected drum patterns all tangle with each other in an elegant dance. At the center of all these elements is Darcy, whose characteristically wry voice shifts from detached to decisive to distressed, throughout the album’s course. Both enigmatically dense in meaning but precisely intricate in sound, Deep in View is an album that sparks novel interpretations with every listen, like an art object that takes on new shape with each angle from which you hold it.
Osees – Live at Henry Miller Library, Big Sur LP (Spiritual Pajamas)
“When we finally decided to bite the bullet during Covid’s initial shut down and subsequent clubs shuttering, we thought we should play some lovely and close to our heart spots to keep it interesting. Henry Miller Library fits that bill perfectly. Lovely place, lovely people and general good vibes. A perfect place for us to set up and record. We’ve dipped deep into the dark waters of our song-sack of holding and found several more never-before-performed-live tunes and paired them up with some oldies we’ve knocked the dust off of, as well as some fan favorites and general surprises to make the merry very. That’s right, we’ve been paying attention. Also, included here are the covers we did because why the fuck not.” Recorded from dusk ’til dawn too at the gorgeous Henry Miller Library in Big Sur. Same killer crew, similar killer vibes. An enchanting pre-holiday evening to tell you that we miss and love you. Play it loud and have one on us. And keep your chin up for goodness sake. “Be well out there.” – OSEES

J Rocc – Wonderful Letter LP (Stones Throw) Available on indie exclusive orange vinyl. J.Rocc and his crew the Beat Junkies have been a seminal force in the rise of instrumental hip-hop, and were among a handful of DJs who transformed the craft into an art form. All along the way J.Rocc has been making his own beats, and A Wonderful Letter – his letter to Los Angeles, and his dedication to a lifetime of L.A. music scenes – is only his second full-length album.

Grand Puba – 2000 LP [Reissue/1995] (Tommy Boy) Vinyl LP pressing. Grand Puba, rapper and emcee, is best known as one of the members of the group Brand Nubian. 2000 is his second solo studio album and was released in 1995 and hit number 5 on the Top R&B/Hip-Hop Albums in the US and got 4 mics from The Source. The album spawned two singles: “I Like It (I Wanna Be Where You Are)”, which was featured in the soundtrack for the video game Tony Hawk’s Underground 2 and “A Little of This” which has backing vocals from Kid (from Kid ‘n Play). The album contains a good juxtaposition of tough drums and bass with smooth soul samples & interpolations (DeBarge, Barry White, The Delfonics, Rose Royce, The Stylistics).

Pharaoh Sanders – Moon Child LP [Reissue/1990] (Music on Vinyl)
To celebrate the 45th anniversary of iconic Dutch jazz label Timeless Records, Music On Vinyl is releasing a series that features albums that are part of the Timeless Records legacy and will be released mainly throughout 2022.Part of this series is Pharoah Sanders’ Moon Child from 1990, which bookended a decade of musical soul searching for Sanders. The acclaimed free jazz player is known to have a raw and abrasive sound, but reinvented himself on this album as a more traditional improviser capable of thoughtful deliberations. Moon Child is a grand old time throughout, and Sanders has never been more eminently sing-along-able as he is on it’s title track. The record was co-written with Horace Silver, George Gershwin and Abdullah Ibrahim and recorded with William Henderson, Stafford James, Eddie Moore and Cheikh Tidiane Fall.
Troggs – Trogg Tapes LP [Reissue/1976] (Liberation Hall)
’60s Brit band The Troggs are garage music forefathers and are cited as influences on numerous alternative and punk bands such as The MC5, R.E.M., The Buzzcocks, The Fleshtones and countless others. Their classic rock hit “Wild Thing” is an international classic covered numerously from Jimi Hendrix, X, Fancy and Siouxsie & The Creatures. Other songs are revered and often covered including “Love Is All Around”, “With A Girl Like You” and “I Can’t Control Myself’. The band recorded 4 studio albums in the ’60s before a hiatus in the early ’70s. They recorded 2 albums in the mid-part of the decade with The Troggs Tapes (not be confused with the legendary spoken word tapes) in 1976. This 12-track album has a ’70s glam-punk sound with raucous tracks like “Supergirl” and “Down South to Georgia” along with cover versions of Rufus Thomas’s “Walkin’ the Dog” and Brendon Dunning’s “Rock and Roll Little Lady”. The album hasn’t ever been re-released on vinyl.
Zola Jesus – Okovi LP [Reissue/2017] (Sacred Bones)
Sacred Bones 15-year edition on clear and black splatter vinyl. For over a decade, Nika Roza Danilova has been recording music as Zola Jesus. She’s been on Sacred Bones Records for most of that time, and Okovi marks her reunion with the label. Fittingly, the 11 electronics-driven songs on Okovi share musical DNA with her early work on Sacred Bones. The music was written in pure catharsis, and as a result, the sonics are heavy, dark, and exploratory. In addition to the contributions of Danilova’s longtime live bandmate Alex DeGroot, producer/musician WIFE, cellist/noise-maker Shannon Kennedy from Pedestrian Deposit, and percussionist Ted Byrnes all helped build Okovi’s textural universe. With Okovi, Zola Jesus has crafted a profound meditation on loss and reconciliation that stands tall alongside the major works of it’s genre. The album speaks of tragedy with great wisdom and clarity. It’s songs plumb dark depths, but they reflect light as well.
Coming Next Week!