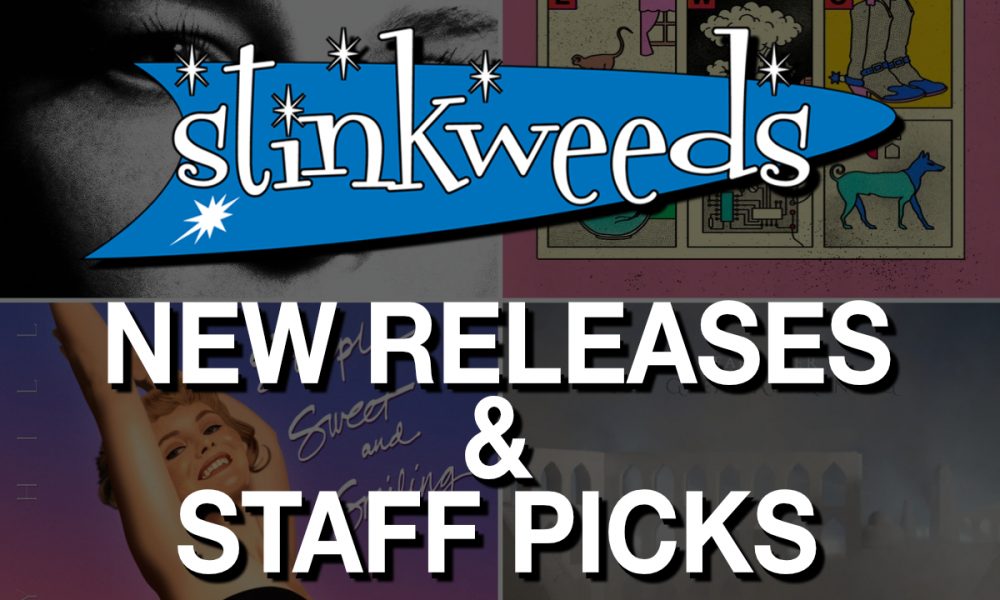 SHEARWATER – The Great Awakening LP (Polyborus)
The first album in six years from Jonathan Meiburg and co. returns to the band’s patient style of baroque, naturalistic art-rock. The Great Reawakening is as much of an about-face sonically as it is spiritually, revisiting a baroque, naturalistic form of art-rock with almost no contemporary peers.
YO LA TENGO – I Can Hear The Heart Beating As One LP reissue (Matador)
Double opaque yellow colored vinyl LP pressing of Yo La Tengo’s monumental I Can Hear The Heart Beating As One for the album’s 25th anniversary. “A stone cold classic” (Rolling Stone) by “the greatest band in the universe” (Pitchfork).
MAGGIE ROGERS – Surrender CD/LP/CASS (Capitol)
GRAMMY-nominated artist/producer/songwriter Maggie Rogers is back with new album, Surrender. Co-produced by Kid Harpoon (Florence + the Machine, Harry Styles) and Rogers, Surrender is the follow-up to her massively beloved 2019 debut, Heard It in a Past Life, which entered Billboard’s Top Album Sales chart at No. 1 and debuted at No. 2 on the Billboard 200, praised by the likes of NPR, The New York Times, Rolling Stone, Pitchfork, TIME Magazine, and many others. The 12-track album details the artist’s life over the past two years through honest and powerful lyricism. Rogers recorded Surrender between her parents’ garage, New York’s Electric Lady Studios, and Peter Gabriel’s Real World Studios in England. Available on black and indie exclusive colored vinyl.
VIAGRA BOYS – Cave World CD/LP/CASS (Year 0001)
In this time of strife, insanity and confusion, only one band is depraved enough to offer themselves up as herald. Like sin-eaters if sins had to be ingested from a very small spoon, Viagra Boys have consumed the utterly incomprehensible chaos of our era and distilled it into 12 immaculate tracks of post-truth-cow-funk-kraut-wave-enlightenment.

KACY HILL – Simple, Sweet and Smiling LP
Born and raised in Phoenix and now living in Los Angeles, Hill got her start in 2014 when her self-released single “Experience,” the second song Hill had ever recorded, started attracting attention online. After touring with Kanye West and Vanessa Beecroft as part of the cast of the YEEZUS tour, Hill signed to West’s imprint G.O.O.D. Music. Her debut EP Bloo came shortly thereafter, and she’s since released three albums: 2017’s Like A Woman, 2020’s independently issued Is It Selfish If We Talk About Me Again, and 2021’s Simple, Sweet, and Smiling. Throughout her career, Hill has collaborated and shared stages with Travis Scott, Kid Cudi, Bon Iver, Francis and the Lights, Cashmere Cat and countless others. “Simple, Sweet, and Smiling delves deeper into Hill’s interest in 1980s synth pop and adult contemporary, maintaining a misty-eyed ease. She sounds lovely on the rich and churning opening track, ‘I Couldn’t Wait.’ ‘Oh how the night feels soft,’ she sighs over vivid piano, guitar, and saxophone, the elements  mingling like watercolors.”—Pitchfork

MARY LATTIMORE + GROWING – Gainer LP (Silver Current)
Critically acclaimed harpist and experimental composer Mary Lattimore and big amp ambient pioneers Growing have united for their first collaboration, Gainer. Remastered here from its original release (previously digital only), Gainer is now available for the first time on vinyl in plush packaging including UV spot gloss “invisible ink”-style jacket printing. Comprised of two side-long pieces, Gainer is less a meeting point of harp and drone guitars and much more a singular creative group vision made up of elemental movements, electrically charged flow and a symphonic aura by three masters of contemporary ambient and experimental composition. Gainer is rumored to be the first record in a series of collaborative albums by Lattimore and Growing. Based on the premiere statement at hand, let’s hope it shall be so!
NICK LOWE – The Convincer LP (Yep Roc)
Nick Lowe’s 2001 album The Convincer established him as an elder statesman of rock and roll, far removed from the ironic power popper he was in the 1970s. The album arrived in a different world than the day before, releasing on September 11, 2001. These were songs for troubled times (“I’m a Mess, ” “Lately I’ve Let Things Slide”) and Nick’s songwriting was never sharper, with Mojo Magazine saying “Nick Lowe has made the album of his career.” The album has been newly remastered from the original tapes.
BLACK DICE – Mod Prog Sic LP (FourFour)
Blue vinyl reissue. The album is the band at their peak, combining twisted rhythms and sharp, beamed-in guitar melodies and vocals . The album packs twists and turns all along the way, morphing and changing shape, creating a truly alien form of classic rock and some of the most timeless and unique leftfield electronic music being made today. This is Black Dice’s 25th year as a band and they sound as unto themselves as they did in 1997, even while sounding nothing like the screamo punk of their Providence days.
JIM JAMES – Regions Of Light and Sound Of God LP reissue (ATO)
Limited, clear purple. Released in 2013, Regions of Light and Sound of God was the debut solo album from Jim James of My Morning Jacket. Deluxe Edition features the original album plus a bonus LP featuring 12 B-sides, demos, and alternate versions including “State of the Art (Demo),” and the previously unheard ballad, “Begin Again.” The 2 LP set is housed in a rainbow foil tip-on gatefold jacket with revised artwork, a fold-out insert and is pressed on clear with purple blob vinyl.
LABRINTH – Euphoria Vol 2 Soundtrack LP (Interscope)
Double translucent orange colored vinyl LP pressing. The Euphoria Season 2 soundtrack features new music from the HBO original series, including Lana Del Rey’s song “Watercolor Eyes.” Labrinth / Zendaya / Billy Swan / INXS / Lana Del Rey / Gerry Rafferty.

EDDIE VEDDER – Earthling LP (Republic)
Earthling serves as Eddie Vedder’s first solo album since releasing Ukelele Songs in 2011 and third overall. Helmed by reigning Grammy Producer of the Year Andrew Watt and recorded at his Beverly Hills studio, the new collection comes introduced by the singles “Long Way”, “The Halves” and “Brother The Cloud”. Earthling features collaborations with a multitude of music legends including Stevie Wonder, Ringo Starr, and Elton John. In a New York Times Magazine interview Eddie noted: “the album is structured kind of like a concert: The special guests come out at the end. Stevie, then Elton, then we’ve got our “Mrs. Mills” song with Ringo. Then the last special guest was my father, whom I really didn’t get to know.”
ANI DIFRANCO – Living In Clip CD/LP Reissue (Righteous Babe)
Newly remastered for CD and vinyl in deluxe packaging. This landmark double album by Ani DiFranco, features her trio from 1995-1996 with Andy Stochansky (drums) and Sara Lee (bass). 25 years later the album is recognized as a point of entry that radically expanded DiFranco’s audience, and a historically important testament to the relationship between Ani as a live performer and the devoted community she created with her fans. [A limited-edition red color vinyl pressing is available.]
ALKALINE TRIO / HOT WATER MUSIC – Split LP reissue (Epitaph)
Limited silver color vinyl pressing of the 2002 split EP from Alkaline Trio and Hot Water Music. In addition to new material, the EP features each band performing cover versions of songs from the other band’s catalogue with Alkaline Trio covering Hot Water Music’s “Rooftops” (from No Division) and Hot Water Music covering Alkaline Trio’s “Radio” (from Maybe I’ll Catch Fire) and “Bleeder” (from I Lied My Face Off).
NICKI MINAJ – Beam Me Up Scotty [Reissue/2009] 2xLP (Republic)
Beam Me Up Scotty is the third mixtape by Trinidadian rapper Nicki Minaj. It was originally released in 2009. The mixtape features guest verses from rappers Bobby V, Brinx, Busta Rhymes, Drake, Gucci Mane, Mack Maine, Gudda Gudda, Jae Millz, Lil Wayne, Red Café, Ricky Blaze, Rocko, Ron Browz, and singer Shanell.
UNWRITTEN LAW – The Hum LP (Cleopatra)
SoCal punk pillars Unwritten Law return with a vengeance on this their first studio album of original material in over 10 years! Still lead by founding member, drummer Wade Youman, along with longtime vocalist/guitarist Scott Russo, UL epitomize the classic SoCal punk rock sound with massive guitars and monster, hook-filled choruses! Artwork includes hand-illustrated lyric sheet done by founder Youman! Watch for music videos to help spread the word about this highly anticipated release!
FRONT LINE ASSEMBLY – Nerve War LP (Cleopatra)
The most sought after recordings from industrial/EBM pioneering force, Front Line Assembly, are gathered here on this epic reissue of the band’s legendary 1986 demo tape, Nerve War! Digitally remastered by German industrial icon Jürgen Engler of Die Krupps, this reissue features all new artwork and detailed liner notes by Dave Thompson based on a recent interview with FLA founder Bill Leeb! Available on vinyl for the very first time!
AMANDA SHIRES – Take It Like A Man CD/LP (ATO)
Grammy and Americana Award-winning singer/songwriter and violinist, Amanda Shires, has pushed the reset button with Take It Like A Man, a record that is so unlike anything she has ever recorded that you would be tempted to think it was her debut album instead of her seventh. Shires, who also plays in The Highwomen, worked with producer Lawrence Rothman (Angel Olsen, Kim Gordon) to make a fearless confessional, showing the world what turning 40 looks like in 10 emotionally raw tracks. [An indie store exclusive white color vinyl pressing is available.]

RUFUS WAINWRIGHT – Rufus Does Judy At Capitol Studios LP (BMG)
Rufus Does Judy At Capitol Studios finds Grammy Award-nominated singer/songwriter Rufus Wainwright performing his groundbreaking 2007 tribute to Judy Garland, Rufus Does Judy At Carnegie Hall, in its entirety, live from Los Angeles’ famed Capitol Studios. “The American Songbook and Judy Garland’s famed 1961 Carnegie Hall concert gave me a lot of hope after 9/11 and lead to the idea for my first song by song recreation of that show at the same venue,” says Wainwright. “It felt fitting to do the entire set again as the dazzling finale of my Rufus-Retro-Wainwright-Spective and hopefully the beginning of the finale of this global pandemic. Once again, these songs revealed their healing power. To be able to sing them in front of Renée, to sing with Kristin Chenoweth and still have my sister Martha be part of these shows was particularly meaningful although to sing them into the very microphone that Judy used for her recordings at Capitol Studios was the most mind-blowing.”

THE HOTELIER – It Never Goes Out [Reissue/2011] CD/LP+MP3 (Dreams Of Field)
THE HOTELIER – Home, Like Noplace Is There [Reissue/2014] CD (Dreams Of Field)
THE HOTELIER – Goodness [Reissue/2016] CD/2xLP+MP3 (Dreams Of Field)
The Hotelier exploded in 2014 with its sophomore album, Home, Like No Place Is There. Met with universal critical acclaim, the record catapulted the Worcester, MA band from unknowns to indie darlings. In 2016 The Hotelier returned with its ambitious third album, Goodness, a record about natural, unnatural, and supernatural love. Recorded and produced by Seth Manchester (Lighting Bolt, Battles, Fang Island) at Machines With Magnets and mastered by Heba Kadry (Future Islands, White Lung, Ty Segall) at Timeless Mastering, Goodness proved once again that The Hotelier was not content to stand still as it pushed and progressed its art further.

JOSH ROUSE – Going Places CD/LP (Yep Roc)
Josh Rouse wrote the songs for Going Places while hunkered down in Spain with his family in 2020 and 2021. The inspiration was to have a set of new songs to play in a small club run by a couple of his Spanish bandmates. Josh recorded and produced the songs in his home studio. The result is a collection of songs that feel a bit looser, lean into the guitar a bit more and will sound great in the live setting. It’s also another sonic shift for Josh, who is not afraid of changing things up. What remains consistent is Josh’s ability to write hooks and find grooves that create a sound that is at once familiar, but wholly new.