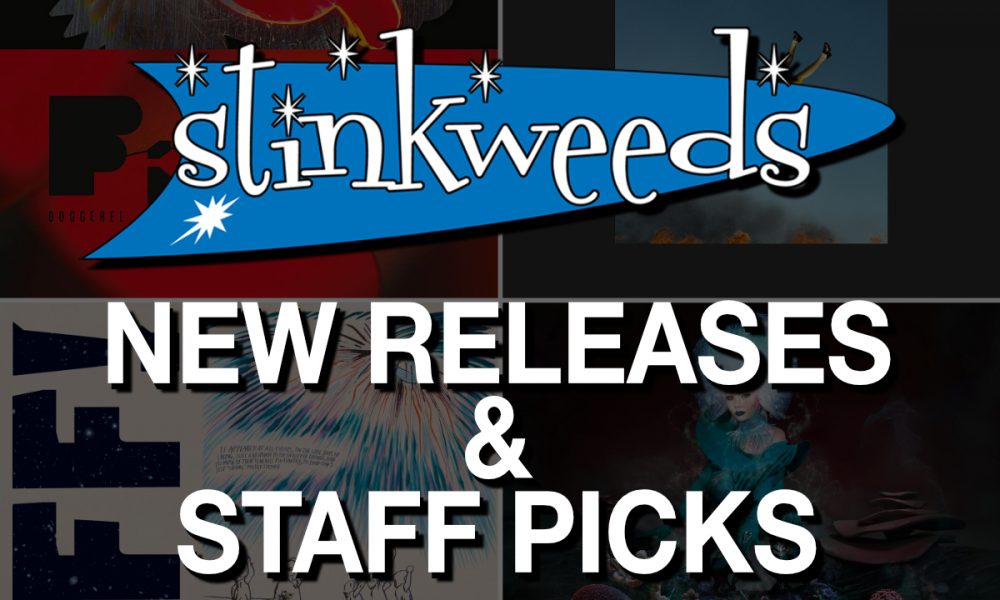 PIXIES – Doggerel CD/LP (Infectious)
The iconic Pixies forged an influential path for alt-rock during their first era, while their post 2004 reunion has seen them alchemise more sophisticated dark arts – a return which has them add another three UK Top 10 albums to the three they achieved on their first run. Now as fired up as ever before, Pixies will release their eighth studio album Doggerel, including lead single ‘There’s a Moon On’. Doggerel is a mature yet visceral record of gruesome folk, ballroom pop and brutal rock, haunted by the ghosts of affairs and indulgences, driven wild by cosmic forces and envisioning digital afterlives where no God has provided one. And all the while, right there on the news, another distant storm approaches.

WILCO – Yankee Hotel Foxtrot 2022 Remaster CD/LP/Deluxe LP
Available on 2CD, limited white vinyl and a 7 LP boxset! Yankee Hotel Foxtrot was widely acclaimed as one of 2002’s best albums, appearing in year-end lists of Mojo, NME, Q, Rolling Stone, and Uncut, among many others. LP box and CD includes the original album, remastered for it’s 20th anniversary in 2022, plus tons of previously unreleased tracks. The set also includes a booklet with an in-depth essay by journalist/author Bob Mehr.

OFF – Free LSD CD/LP (Fat Possum)
OFF!, the punk think tank helmed by Keith Morris (Black Flag, Circle Jerks) and Dimitri Coats (Burning Brides), return with their first new full-length in eight years. Free LSD effectively hits reset on the band, as the injection of new energy into their signature high-anxiety sound bonfires via new drummer Justin Brown (Thundercat, Flying Lotus, Herbie Hancock) and bassist Autry Fulbright II (…And You Will Know Us By The Trail Of Dead) pushes the concept of punk into another frenetic dimension. The effect is palpable and volatile, adding a new swing to the music’s incendiary thrust. While the new lineup brings an experimental flair to the table, catapulting their subterranean howl into the orbit of Sun Ra and The Stooges by way of Coats imbibing several songs with layers of electronics amid explosions of percussive virtuosity from Brown and bursts of guest saxophone from Jon Wahl (Claw Hammer), Morris sounds timeless as ever, unleashing torrents of no-nonsense screeds. [An indie store exclusive purple color vinyl pressing is available.]

YEAH YEAH YEAHS – Cool It Down CD/LP (Secretly Canadian)
It could only be called alchemy, the transformative magic that happens during the Yeah Yeah Yeahs’ most tuned-in moments in the studio, when their unique chemistry sparks opens a portal, and out comes a song like “Maps” or “Zero” or the latest addition to their canon, “Spitting off the Edge of the World” featuring Perfume Genius – an epic shot-to-the-heart of pure YYYs beauty and power. A thunderstorm of a return is what the legendary trio has in store for us on Cool It Down, their fifth studio album and their first since 2013’s Mosquito. The eight-track collection, bound to be a landmark in their catalog, is an expert distillation of their best gifts that impels you to move, and cry, and listen closely.

LAMBCHOP – The Bible CD/LP (Merge)
The music on The Bible is more unpredictable than it’s ever been on a Lambchop record. Jazz careening into country, into disco, into funk, and back to country. Bandleader Kurt Wagner trusts his own voice-that he can tie all those sounds and styles together with his own words and phrasing, whether the lyrics are observing the dire headlines of racial strife from that summer in Minneapolis when he recorded The Bible, or just the graffiti outside the former paint factory where it was recorded, or the bumper stickers out on the highway, or his own feelings about his father confronting his mortality back home, or about him doing the same on his own wherever he may be in the world. This is Lambchop’s new album-born in a new place but out of a process that he first discovered back home at Nashville’s Springwater Supper Club, the one that helped him find his own voice in the first place. Amen. This is The Bible.

TITUS ANDRONICUS – The Will To Live CD/LP (Merge)
With The Will To Live, Titus Andronicus invite listeners on a journey from fear to faith, from anger to acceptance, from grief to gratitude, all chasing the mythical ideal of Ultimate Rock. Drawing on maximalist rock epics from Who’s Next to Hysteria, the band have crafted their richest, densest, and hardest-hitting album to date, matching the sprawl and scope of their most celebrated work while also streamlining their ambitious attack to greater effect than ever before. The Will to Live was produced by Titus Andronicus singer-songwriter Patrick Stickles and award-winning Canadian producer Howard Bilerman (Arcade Fire, Leonard Cohen, The Whole Nine Yards) at the latter’s hotel tango recording studio in Montreal. “It may strike some as ironic we had to go to Canada to record our equivalent to Born in the USA,” says Stickles, “but the pursuit of Ultimate Rock knows no borders.” The album comes packaged with gorgeous triple gatefold artwork by illustrious illustrator Nicole Rifkin.

BJORK – Fossora CD/LP (One Little Independent)
Björk delivers her long-awaited follow-up to 2017’s Utopia with one of the most highly anticipated albums of 2022: Fossora. Inspired by the death of her mother, her youngest son leaving home and the Covid pandemic quarantine, the enigmatic artist’s tenth album overall is introduced by lead single “Atopos”. “Each album always starts with a feeling that I try to shape into sound,” Björk shares. “This time around the feeling was landing (after my last album Utopia which was all island in the clouds element air and no bass) on the earth and digging my feet into the ground. It was also woven into how I experienced the ‘now’.” [An indie store exclusive olive-green color vinyl pressing is available. There is also a deluxe CD edition packaged in a 20-page hardbound book.]

METRIC – Formentera LP (Metric Music Int’l)
Finally available on vinyl! 2022 album from the Canadian alt-rock band. Formentera is the follow-up to their 2018 album Art of Doubt. Named for an idyllic island near Ibiza off the coast of Spain, Formentera is a place that, for Metric, only existed on a page in a “dream destinations” travel book that lay open on a desk in the new recording studio that guitarist Jimmy Shaw built in 2020, in a rural hamlet north of Toronto. This is the setting where the band’s eighth album took shape. Metric’s sound is both genre-defying and genre-defining.

DENZEL CURRY – Melt My Eyez See Your Future CD/LP (Loma Vista)
Melt My Eyez See Your Future arrives as Denzel Curry’s most mature and ambitious album to date. Recorded over the course of the pandemic, Denzel shows his growth as both an artist and person. Born from a wealth of influences, the tracks highlight his versatility and broad tastes, taking in everything from drum n’ bass to trap. To support this vision, he enlisted a wide range of collaborators and establishes himself as one of the most groundbreaking rappers in the game.

TYLER CHILDERS – Can I Take My Hounds To Heaven 3CD/3LP (RCA)
Can I Take My Hounds to Heaven? is the highly anticipated new album by Tyler Childers, and his longtime band The Food Stamps. This unique collection is separated into three parts, each with a different sonic perspective, but all part of one album vision. Hallelujah is a pared-back version of the music featuring Tyler and his band only; Jubilee is a full band including strings, horns, bgvs and a touch of sitar; and an exciting new sound in Joyful Noise. From Tyler Childers’ vision, it’s a genuine concept album meant to showcase the incredible musicianship of The Food Stamps.

THE BAD PLUS – The Bad Plus CD (Edition)
Twenty-one years after making their landmark debut as a genre exploding piano-bass-drums trio, the always adventurous group have reinvented themselves as a dynamic quartet.

CLARK – Body Riddle [Reissue/2006] 2xLP+MP3 (Warp)
CLARK – 05–10 LP+MP3 (Warp)
Now regarded as something of a classic in the Clark catalogue, Body Riddle has been cited by producers including Arca, Rustie and Hudson Mohawke as being an influential record. Writing for The Quietus back in 2014, Ed Gillett commented: “It’s no hyperbole to say that Clark’s 2006 LP Body Riddle is one of electronic music’s unheralded masterpieces, it’s layers of heat-warped melodies, flickering textures and muscular drumming (played by Clark himself) creating a beautiful and unstable mixture of violence and wistfulness. Its production is immaculate, almost inhumanly so, swaddling the listener in midrange before pummeling them viciously, shifting seamlessly between organic instruments and impossible, vertiginous sound design.” 05–10 is a compilation of new tracks, unreleased archive material and rarities.

BEN HARPER – Bloodline Maintenance LP (PIAS)
Recently released on CD – now available on vinyl. Ben Harper returns with his eagerly anticipated, fiercely personal soulful album, Bloodline Maintenance. The album is preceded by the single “We Need To Talk About It” which, propelled by Harper’s blisteringly funky guitar, defiantly addresses the wounds of slavery through a sharp-edged call-and-response with gospel backing vocals and pounding rhythms augmented by the distinctive sound of the African talking drum. “This whole album is really soul music reinterpreted with a lap steel,” Harper says. “I believe strongly that music has this great capacity for communication like a sonic newsprint. And I’ve always believed that the music I write has a place in the choir.” Bloodline Maintenance is a work largely inspired by the loss of a long-time friend and the lingering influence of his mercurial and charismatic father. Harper performed most of the instruments on his own, spanning guitar, bass, drums, and an eclectic assortment of percussion including a plastic toy snare.

JULIA JULIA – Derealization CD/LP (Suicide Squeeze)
If you can’t trust yourself, who can you trust? This is the crucial question at the core of Julia, Julia, the moniker for Julia Kugel, founding member of garage punk icons The Coathangers and the dream pop duo Soft Palms. On her first solo full-length album Derealization, Kugel shifts her focus from collaboration and band dynamics towards a singular artistic vision and private self-discovery. Steeped in the beguiling pop elements of her past work, Derealization is a meditative deep dive into the mind of a person struggling to understand a crumbling internal and external world. The album traverses a landscape of ethereal folk, atmospheric deconstructed pop, and dubbed-out country ballads, all centered around straightforward and direct lyrics. [A limited-edition pink color vinyl pressing is available.]

SOL MESSIAH -God Cmplx CD/LP (Rhymesayers)
On GOD CMPLX, Sol Messiah connects with some of the finest MCs in the game to create an impressive collection of Hip Hop music that’s both innovative and inspiring. Featuring guest performances from KXNG Crooked, Sa-Roc, Evidence, Locksmith, Slug (Atmosphere), Aesop Rock, Murs, Baba Zumbi (Zion I), Che Noir, Lyric Jones and many more, GOD CMPLX is a powerful and engaging project serving as a testament to Sol Messiah’s skills both as a producer as well a visionary. [A limited-edition color vinyl pressing is available.]

LINCOLN – Repair & Reward LP+MP3 (Temporary Residence)
Recently released on CD – now available on ocean blue color vinyl. The long-awaited, long-overdue anthology of one of the more influential and revered post-hardcore bands of the early 1990s. Out of print and unavailable for over 25 years, all songs have been newly mixed from the original master tapes by J. Robbins (Jawbox).