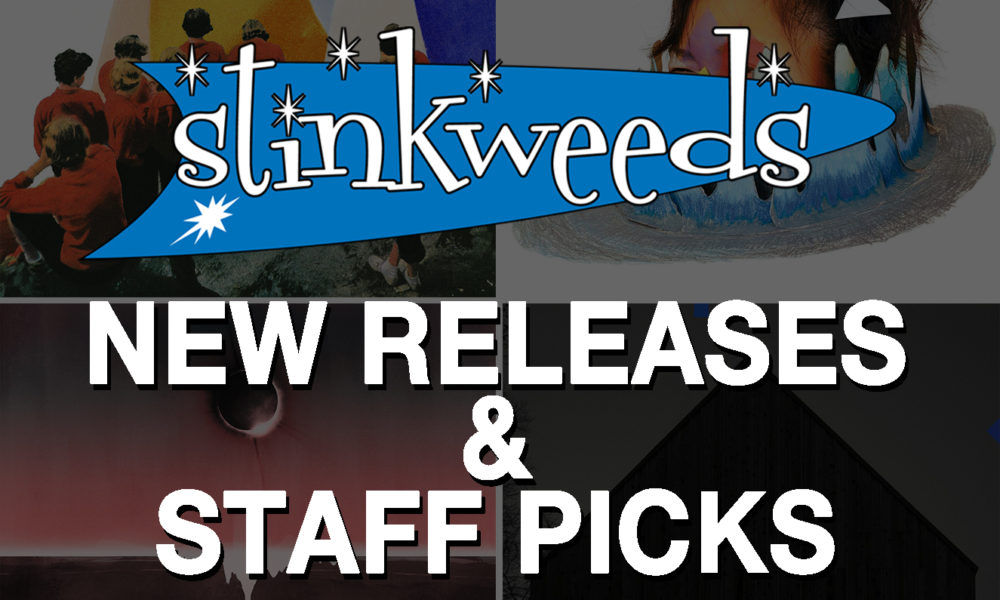 Alvvays – Antisocialites CD/LP+MP3/Cassette (Polyvinyl)
Antisocialites is the much-anticipated follow-up to Alvvays’ 2014 self-titled debut. Across its 10 tracks and 33 minutes the Toronto-based group dive back into the deep end of reckless romance and altered dates. Through thoughtful consideration in basement and abroad, Alvvays has renewed its Scot-pop vows with a powerful new collection of manic emotional collage. [Limited edition yellow colored vinyl pressing available.]

Tori Amos – Native Invader CD (Decca)
Tori Amos’ fifteenth album and follow-up to 2014’s Unrepentant Geraldines is an intense feast of melody, protest, tenderness and pain. In the summer of 2016, she took a road trip through North Carolina’s Smoky Mountains. The intention was to reconnect with the stories and songlines of her mother’s family, who were from the North Carolina and Tennessee Smoky Mountain area. That winter, two seismic events knocked the plan off its axis. The fallout from the US election. And in January her mother, Mary Ellen Amos, suffered a severe stroke leaving her unable to speak. The complex influence of America’s alt-right Super PACs, lobbyists and think tanks informs much of the tension in Native Invader. [Available in Regular and Deluxe editions. Deluxe adds two bonus tracks. Vinyl edition due October 20.]

Bash & Pop – Friday Night Is Killing Me [Reissue/1993] 2xCD (Omnivore)
When the Replacements called it quits in 1991, Tommy Stinson missed playing in a band with great chemistry and who all shared the same vision. He recruited then Replacements drummer Steve Foley, Foley’s brother Kevin, and Steve Brantseg to form Bash & Pop. Recording with Producer Don Smith (Cracker, Keith Richards, John Hiatt) and getting help from Heartbreakers Benmont Tench and Mike Campbell, Americana icon Greg Leisz, Wire Train’s Jeff Trott, and more, the band’s debut album, Friday Night Is Killing Me, arrived in January of 1993. In addition to the original 11 track release, this expanded double-CD edition includes an 18-track bonus disc adds rare singles and B-sides, their contribution to the soundtrack of the 1994 film Clerks, and 15 previously unissued performances.

Tim Berne – Incidentals CD (ECM)
Incidentals characteristically action-packed in the Berne tradition: powerful, dynamic, often fast-moving – yet also very clear in all its teeming detail. Producer David Torn plays guitar in a cameo at the climax of the modestly-titled “Sideshow” (in reality a 26-minute epic journey), soloing amid thunderous timpani and over serpentine melody outlined by sax and clarinet.

Cannabis Corpse – Left Hand Pass CD/LP/Cassette (Season Of Mist)
Turning a classic album title such as Entombed’s Left Hand Path into a weedy phrase would normally be punishable by having to listen to the worst of Modern Talking on continued play. Yet Cannabis Corpse not only get away with it, but the death metal and pot aficionados are actually doing exactly what their massive following is happily demanding of the Americans. Under the influence of the genre legends who preceded them, the trio give rise to an unrelenting piece of crushing, weed-themed death replete with their signature, THC-fueled, horror fiction lyrics. As tracks such as “The 420th Crusade,” “Chronic Breed” and the title track illustrate, Left Hand Pass is another massive step-forward for the band and a monumental piece of US death metal.

Death From Above – Outrage! Is Now CD/LP (Last Gang/WB)
“Death From Above (née 1979) must have had a hell of a tough time making 2014’s The Physical World. Following up their universally acclaimed debut a full decade later, the Canadian duo had to produce something that could both recapture the manic energy of their early days and make a newly fresh impact on a musical landscape that had altered drastically since their 2006 breakup. It’s as if the last record was the sound of Jesse F Keeler and Sebastian Grainger reminding themselves what they can do together, whereas Outrage! Is Now finds them actually enjoying the process of writing and experimenting with the potent formula they concocted back at the start of the millennium. As ever, the record is powered by the combustion engine that has driven DFA’s monstrous sound from the start (and also caused their early career crash): the collision of its members’ separate musical planets. With this foundation of sound rooted firmly back in place, the band are now free to start breaking the firm rules they have always worked within to surpass, rather than just equal, the quality of their early releases.” – Clash Music

Deerhoof – Mountain Moves CD/LP (Joyful Noise)
Deerhoof recognizes that we are simultaneously living in two worlds, one a maniacal, mainstream monoculture hell-bent on driving humankind into extinction, the other a churning underground teeming with ideas and dogged optimism and the will to thrive and survive. Mountain Moves refutes the former by ecstatically celebrating the latter. [Limited blue colored vinyl pressing available.]

The Dream Syndicate – How Did I Find Myself Here? CD/LP+MP3 (ANTI-)
The Dream Syndicate are at the foundation of contemporary alternative music because back in 1981 at a time when most bands were experimenting with new technology, they choose to bring back the guitar. Their seminal album The Days of Wine And Roses (1984) has been cited as influential by artists from Nirvana to the Black Crowes. Known for their incredible live performances, the band toured with everyone from REM to U2, before splitting up in 1988. In 2012 after years apart in solo projects, frontman Steve Wynn reunited The Dream Syndicate to perform at a charity festival in Spain. The reunited band took everything in baby steps. From the first day of recording the aptly titled How Did I Find Myself Here? it was apparent that the band was making an album that would live up its history and take their story into the present. Wynn says, “In a way it feels like if The Days of Wine And Roses would have been made in 2017. Which is to say that it’s true to what we did before but it’s also a whole new thing.”

Mount Kimbie – Love What Survives CD/LP+MP3 (Warp)
The third album from Mount Kimbie is the product of three years of intense creative development, continually honed by the duo writing and rewriting their ideas to form something wholly idiosyncratic and personal. It brings together the voices of their close friends and collaborators who together represent a bright corner of young artistic talent – James Blake, Micachu and King Krule. [Limited white colored vinyl pressing also available.]

The National – Sleep Well Beast CD/2xLP+MP3 (4AD)
The National’s elegant seventh full-length album follows-up 2013’s Trouble Will Find Me and their 2015 Ragnar Kjartansson collaboration A Lot Of Sorrow. “Sleep Well Beast is an album about getting old and staying together. That makes it, on some fundamental level, the most domestic album ever made by a band that’s always been pretty domestic. And yet Sleep Well Beast bursts with conflict and passion and restlessness. The National’s albums take time to reveal themselves, but Sleep Well Beast already feels like the best thing they’ve done since Boxer.” – Stereogum [Limited blue colored vinyl pressing also available.]

Nosaj Thing – Parallels CD/LP+MP3 (Innovative Leisure)
Parallels is the fourth full album released under Jason Chung’s distinctive moniker, Nosaj Thing. Masterfully dimensional, Parallels represents the acclaimed Los Angeles-based electronic producer/composer/performer’s most diverse, vital work yet. As such, Chung sees Parallels represents a kind of redemptive rebirth. The album’s compellingly elusive, uncategorizable sonics developed out of what he terms a personal and musical “identity crisis.” “The latest record from Los Angeles’ Nosaj Thing is a heady and atmospheric experience that feels like a hazy film placed atop regular reality. What it lacks in straightforward melodies, it compensates with impressionistic tones and textures that create a canvas for the listener to project onto.” – The Line Of Best Fit

Nothing But Thieves – Broken Machine CD/LP (RCA)
Broken Machine is the highly anticipated sophomore album from the British rock band and follow-up to their acclaimed 2015 eponymous debut.

Toadies – The Lower Side Of Uptown CD/LP (Kirtland)
Toadies’ seventh studio album serves as a “return to form” for the band according to frontman Vaden Todd Lewis. “This album is roots Toadies, full of riffs and time shifts.”

Chad VanGaalen – Light Information CD/LP+MP3/Cassette (Sub Pop)
For an album that’s about “not feeling comfortable with really anything,” as Chad VanGaalen says, Light Information is nonetheless a vivid, welcoming journey through future worlds and relentless memories. The rich soundscapes and sometimes jarring imagery could only come from the mind of a creative polymath – an accomplished visual artist, animator, director, and producer, VanGaalen has scored television shows, designed puppet characters for Adult Swim, directed videos for Shabazz Palaces, Strand of Oaks, METZ, Dan Deacon, and The Head And The Heart, and produced records for Women, Alvvays, and others. While alienation has always been a theme of VanGaalen’s music, Light Information draws on a new kind of wisdom – and anxiety – gained as he watches his kids growing up. “Being a parent has given me a sort of alternate perspective, worrying about exposure to a new type of consciousness that’s happening through the internet,” he says. “I didn’t have that growing up, and I’m maybe trying to preserve a little bit of that selfishly for my kids.”

Zola Jesus – Okovi CD/LP (Sacred Bones)
Nika Roza Danilova has been recording music as Zola Jesus for more than a decade. For the majority of that time, she’s been on Sacred Bones Records, and Okovi marks her reunion with the label. Fittingly, the 11 electronics-driven songs on Okovi share musical DNA with her early work on Sacred Bones.